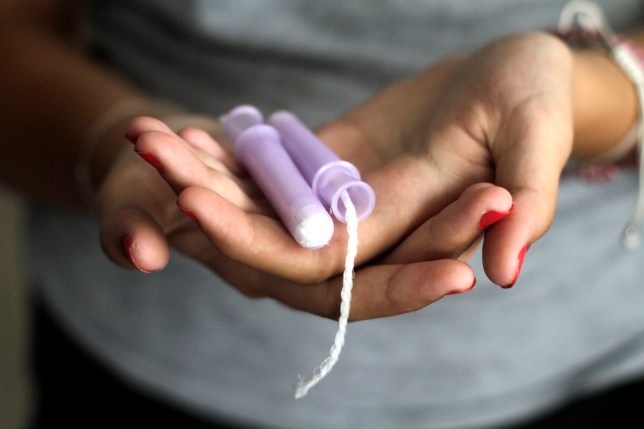 There is nothing unhygienic about period blood and disposing of a tampon isn’t rocket science (Picture: Getty Images)

A Germany-based start-up run by men, Pinky Gloves, got themselves into a bloody mess last week after their product was noticed by OB-GYN Jen Gunter.

‘So these dudes designed pink gloves so tampons and pads can be disposed of properly and discreetly’, she tweeted alongside a translated screenshot of a post from their Instagram.

The post explains that the product was born after two of the founders moved in with women and were unhappy with tampons in their bins. The duo presented their product on the German version of Dragons’ Den and pitched it to potential investors.

‘We both really do understand women,’ one founder said on the TV show. Arguing that it just ‘smells unpleasant’ whenever they ‘dare to look in the rubbish bin’, they managed to get an investment of €30,000.

It didn’t take long for people who menstruate to take to social media to collectively drag them, their product and the very notion that periods are dirty altogether.

Like many others, I too rolled my eyes upon first seeing the product and laughed at just how ridiculous it was. Initially, I was pleased to see just how many were outraged by the suggestion period blood is dirty.

However, when a product like this gains so much attention, the conversation rapidly descends into chaos. The more I saw it unfold, the more I realised we are failing to have important dialogues surrounding period education and the menstrual product industry altogether.

Although it may be entertaining to watch the pile-on, a wider discussion is needed to ensure that products that could actually help people who menstruate don’t get overlooked.

Many have rightly pointed out how unnecessary and wasteful the ‘period gloves’ are. There is nothing unhygienic about period blood and disposing of a tampon isn’t rocket science. You simply wrap it in tissue and put it in the bin.

Pinky’s glove forms its own bag, which resembles the way one might dispose of dog poo. Even Die Welt, a conservative German national daily newspaper, added to unfavourable feedback: ‘Is [the period glove] a real invention? No. It is no surprise that there are no women behind the Pinky but two men, who have no experience of using sanitary products.’

This isn’t an innovative, life-changing product, it’s menstrual capitalism at its finest – a practice that prioritises profits over the health and needs of those who menstruate and often pushes a feminist message to distract you from the fact that they want to sell you a useless product.

Pinky Gloves are a drop in the ocean of brands that have contributed towards period stigma. ‘Detox pearls’ that claim to ‘cleanse’ the vagina and remove ‘old stagnant blood’ have long plagued the vaginal hygiene market, as well as an array of vulvar washes incorrectly advertised as vagina cleansers.

By suggesting those who menstruate need to ‘keep the used tampons from the eyes of others’ – a quote directly from their Instagram page – they’re entertaining the incorrect notion that periods are a dirty, shameful thing we should hide.

Furthermore, most tampons in Germany are applicator-free, meaning that most are probably getting blood on their hands when inserting. This is just another example of how this product was created out of disgust, instead of an issue that needs solving.

Also, many bathrooms in Germany already provide bags for period products to be disposed of – so, this product was created because the founders themselves are disgusted by the sight of used period products and menstrual blood, rather than being for any benefit of the people actually using them.

As a menstrual educator, I see firsthand the long-lasting impact that stigma has on people who menstruate. Many of us are told from an early age that periods shouldn’t be spoken about and this often leads to a lack of proper education.

As a result, we may accept things like extremely painful periods, pain with sex and bleeding outside of a period as normal.

Entertaining the idea that periods should be kept a secret stops people from accessing both products they need as well as healthcare. When so much time is spent debunking basic things like reminding people period blood isn’t dirty, it takes even longer for society to make real progress.

Many have pointed out that when two women went on the same show two years ago to pitch reusable period pants, they did not receive investment.

Note that the two women from @its_me_ooia, who sell washable period panties, did NOT receive investment in the same TV show two years ago. Money comes when men sell expensive pink waste as a solution for a âwomenâs problemâ. #pinkygloves

Ooia sells a range of absorbent underwear for different ages as well as nursing bras. They pride themselves on ‘bringing about social change for women by conducting dialogues and initiating them with our products’ and are a great example of why we need those impacted at the helm of designing such products.

The outcome of this company not succeeding on the TV show suggests that these problems are only worth solving when they make men uncomfortable. It also tells those who menstruate that we don’t know our bodies or how to deal with periods.

Unfortunately, this is something we already face every day through a combination of societal attitudes, advertising and even conversations with our doctors.

For example, the APPG on Endometriosis Inquiry reported that the average diagnosis time hasn’t improved in the last decade. The charity Bloody Good Period also found that 27% of people say they have never felt supported by their employer when it comes to menstrual health.

Upon receiving backlash, Pinky Gloves issued a statement that said: ‘we’ve realised we still need to learn a lot and have some blind spots. We take your feedback very seriously and rethink our product and reflect the entire history of origin’.

As Pinky Gloves are still trading, it’s unclear to me whether their response is sincere. The brand added that their family members have been subjected to hate speech on the back of this too, which again highlights the need for a much wider discussion.

We need those directly impacted at the heart of these discussions, with brands looking to those who have tirelessly been working in the period space for years to help guide their actions.

The fact that justified criticism quickly descended into hate speech proves that society is not at a place where we can have meaningful discourse on a topic that so desperately needs it.

The more time spent on debunking myths that shouldn’t still exist in the 21st century, the longer it will take for us to improve other pressing issues.

Matters such as shortening diagnosis times for those with period-related conditions, eradicating period poverty by making products free and eliminating tampon tax globally are more deserving of our attention.

Once there’s more focus on those, it’ll hopefully help to stop these ridiculous ‘inventions’ before they even have a chance to ask for funding.

MORE: People are reporting heavier periods as a possible side effect of the Covid vaccine