THE UK economy shrank by 2.9% in January after taking a hit due to the third national lockdown, according to official figures.

But the fall was better than the 4.9% dip economists had been expecting. 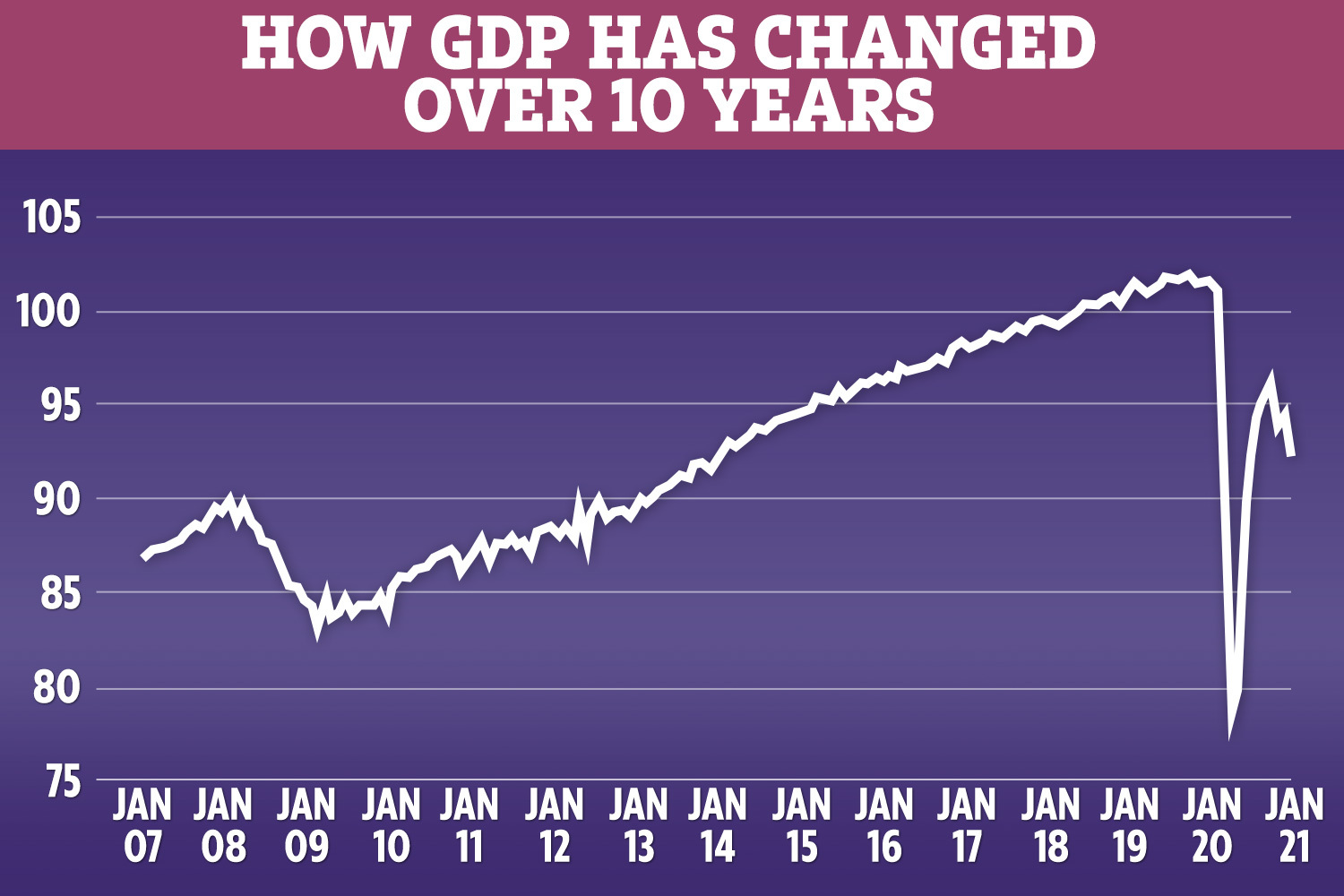 According to the latest figures from the Office for National Statistics, the fall marks a step backwards from the end of last year, when the economy grew 1.2% between November and December.

The economy is now 9% smaller than its pre-pandemic level in February 2020.

January’s dip in economic growth came when the nation was put under a third national lockdown, with some of the toughest restrictions in place since Covid hit a year ago.

The services sector was the main drag on growth, decreasing by 3.5%, as hospitality and leisure businesses had to temporarily close under the restrictions.

Deputy national statistician for economic statistics Jonathan Athow said: “The economy took a notable hit in January, albeit smaller than some expected, with retail, restaurants, schools and hairdressers all affected by the latest lockdown.

When GDP goes up, the economy is generally thought to be doing well although today’s figures aren’t as strong as hoped.

Andrew Wishart, UK economist at Capital Economics, told The Sun the full impact of the crisis on jobs and businesses will only become apparent once the government starts to withdraw its support.

The research firm expects unemployment to double from 4 per cent to 8 per cent, with the same number of companies likely to go bust.

“However, increases in health services from both vaccine rollout and increased testing partially offset the declines in other industries.

“Both imports and exports to the EU fell markedly in January, with much of this likely the result of temporary factors.

“Returns from our more timely surveys and other indicators suggest trading began to recover towards the end of the month.”

Meanwhile, total imports and exports of goods saw the largest monthly fall since records began in January 1997, according to separate ONS data.

Last month, the UK avoided a double dip recession, but still shrunk at its fastest rate in 300 years in 2020.

Gross domestic product (GDP) dropped by 9.9% over the course of the 12 months from January to December due to the coronavirus pandemic.

The record fall – which was caused by the pandemic and businesses being closed due to several lockdowns – also wiped out seven years of economic growth.

Redburn chief economist Melissa Davies said the UK is “on the road to recovery” following the latest figures from the ONS.

“At face value, the UK GDP data for January is rather reassuring,” she said.

National Institute of Economic and Social Research principal economist Rory Macqueen said a further fall in economic growth in February and March might be “smaller than expected”.

He added: “The pace of recovery from the second quarter will depend on whether vaccines continue to roll out according to plan, whether further mutations or outbreaks bring about a resurgence in the virus, and how quickly public confidence returns.”

Before the latest lockdown restrictions were introduced, the economy was expected to grow in the first quarter of 2021.

But rising cases of coronavirus and a new mitant strain forced the government to act to save the NHS.

The pandemic has seen redundancies hit record highs as the unemployment rate rose to 5% with 1.72million people out of work.

Carol Vorderman, 60, beams as she shows off her curves in skin-tight leather jumpsuit