DAILY coronavirus infections have remained stable today, with a further 88,171 people testing positive for the bug.

It comes as one study suggests that daily cases are closer to 200,000, as Brits snub reporting their lateral flow tests.

A new study has found that cases could actually be closer to 200,000 a-day as Brits forgo reporting their lateral flow test resultsCredit: LNP 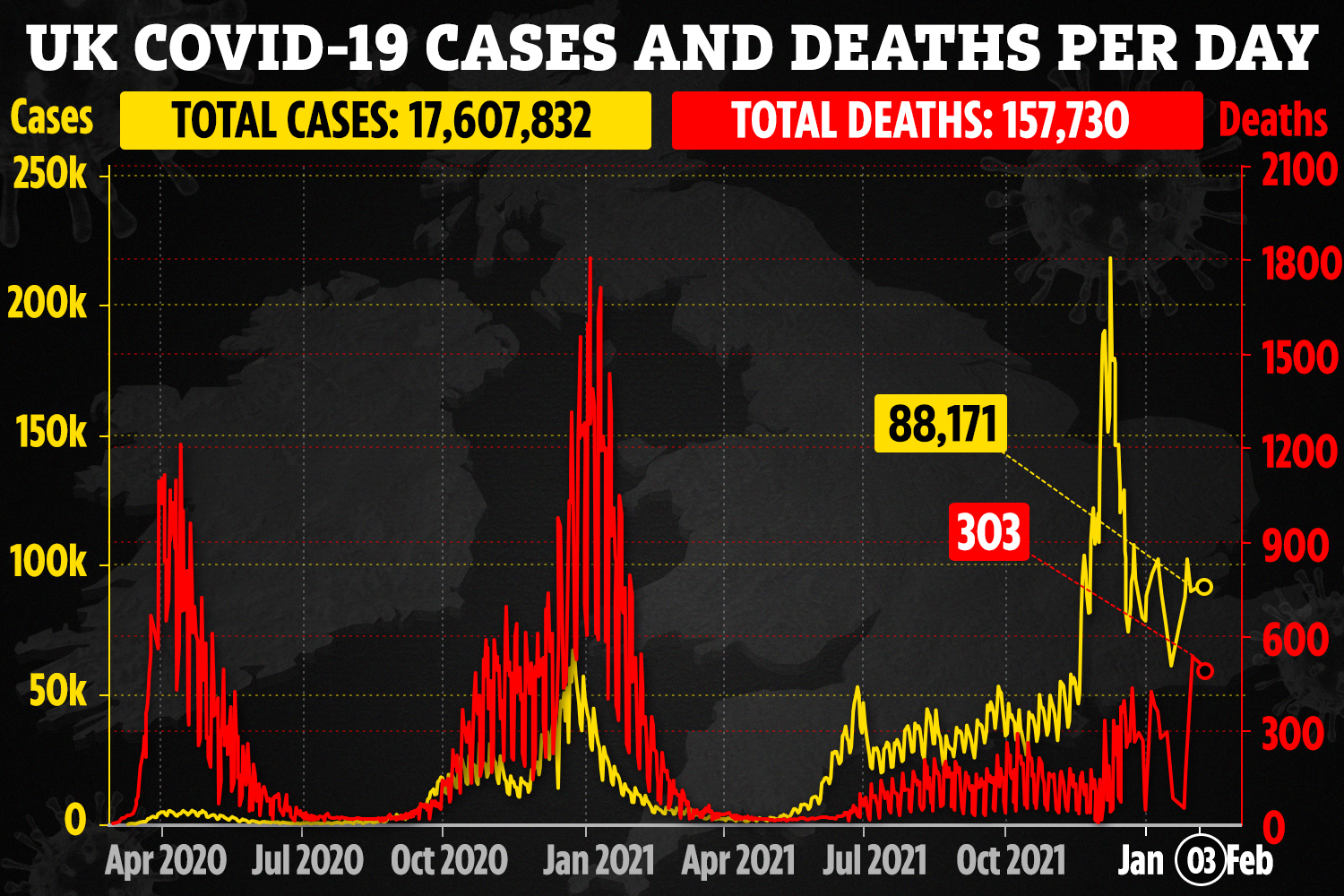 Yesterday cases plummeted by 21 per cent in a day, with 88,085 people recording a positive result, but deaths reached an 11-month high after the metric on the government dashboard was changed.

Deaths are down by 43 per cent today, with a further 303 deaths reported.

Cases have remained steady and experts say that high levels of vaccine uptake means that severe disease is unlikely for the majority.

In December, health officials said Brits who got a positive lateral flow test needed to report their result to the NHS website and go into self-isolation.

But they no longer need to get a confirmation PCR if they do not have any symptoms.

Prof Tim Spector, an epidemiologist at King’s College London, said this means positive LFTs are “often not being logged with the government, so confirmed case data is missing thousands of LFT results, leading to massive under-reporting”.

Prof Spector said that in November, some 70 per cent of people with a positive lateral flow were following up with a PRC. Now, it’s dropped to 10 per cent.

While both PCRs and LFTs are included in the official daily tally, it’s possible that cases are slipping through the cracks after the obligatory PCR rule was scrapped.

Data from the government also shows that Covid cases are still rising in 172 areas in the UK.

Overall, cases have plummeted across the UK with the majority of people catching Omicron experiencing mild, cold-like symptoms.

Various studies have shown that Omicron is milder and the rollout of booster vaccines has helped bring the UK out of lockdown.

In the UK Health Security Agency’s weekly winter briefing, data shows that Covid has decreased on a national level and that hospitalisations also decreased in most age groups.

It did however highlight that there has been a slight increase in those aged 0-4 to 5-14.

In the seven days up to January 29, cases fell in 205 areas in the UK, and the interactive map shows current infection levels.

With cases still rising in some areas in the UK, Professor Steven Riley, Director General of Data, Analytics and Surveillance at the UK Health Security Agency (UKHSA) said ‘it’s promising’ that we are no longer seeing rapid rises in incidents of infection and hospitalisation.

He added: “We urge everyone to get their vaccine and booster jab as soon as they are eligible, to test regularly with LFDs before meeting anyone who is vulnerable and to take a PCR test if they have symptoms.

“Please keep playing your part to reduce the spread of Covid-19.”

Silk Sonic are joining ‘Fortnite’ with a special radio station