Professor Sir Ian Boyd, of the University of St Andrews, said that the UK could end up in a pattern of “control and release” due to potentially vaccine-resistant Covid variants. 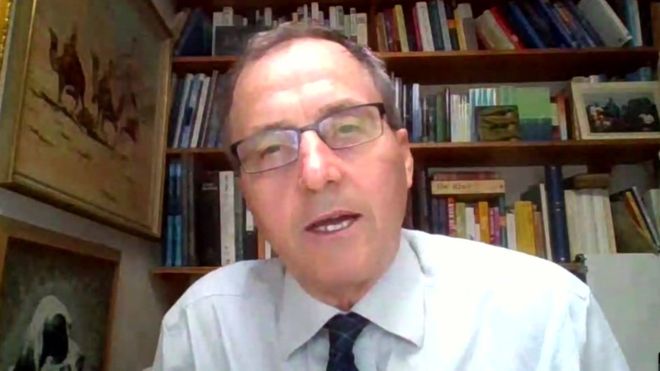 Professor Sir Ian Boyd, of the University of St Andrews, warned mutant Covid strains could leave Britain in a cycle of lockdownsCredit: BBC

It comes after early trials suggests the Oxford/AstraZeneca jab offers “minimal protection” against mild disease from the South Africa variant.

Officials fear the mutation – believed to be capable of evading vaccines – is already widespread in the UK and have ramped up doorstep surge testing.

The Government’s scientific advisers have assured that the vaccine – the main weapon in Britain’s fight against Covid – can still protect against severe illness and death.

But Prof Boyd, along with other prominent Sage members, say that relaxing the current restrictions too early could allow more variants to emerge.

They suggest that Brits should “take the pain” of longer restrictions to reduce the risk of mutations prompting repeated shutdowns.

Prof Boyd, an infectious disease expert, told The Times that early release of lockdown measures “tends to be a false economy because it simply fuels a new wave of disease”.

He added: “It stands to reason that the more people there are in the population with infections - the prevalence – the more virus that is replicating and the more chance there is of even highly improbably mutations happening.”

But even if Britain gets ahead of the South African strain, there could be more worrying variants still to emerge, he warned.

“My suspicion is that we will experience a damped oscillation of control-release for a long time to come — perhaps several years,” he said.

Other experts have warned that the call to “go back to normal” is “false” and people should be prepared to modify their behaviours to limit the spread of disease going forward.

‘LEARN TO LIVE WITH IT’

Professor Adam Finn, an academic from the University of Bristol’s School of Clinical Sciences, said Covid is unlikely to “just disappear” and we will have to “learn to live with it”.

Appearing on BBC Breakfast today, the member of the Joint Committee on Vaccines and Immunisations was asked whether the Covid vaccination programme could be similar to the annual flu jab.

“I think that is the likely outcome. I think it’s much less likely that will completely eradicate this infection and it’ll just disappear,” he said.

“I think it’s more likely it’ll evolve, we’ll kind of learn to live with it.

“So the constant call to go back to the normal is probably a false one and I think we’re going to have to now live going forward with the reality of viral infections and and making an effort to avoid passing them around.”

He also said that it could take a few months to adapt vaccines to tackle emerging variants.

“It will take some time, simply because although the new variants can be adjusted in the vaccines they then have to come through the regulators, and then have to be manufactured at scale in order to be available,” he said.

“So it’s not a matter of a month or two, it’s probably more than that.

“But we currently have vaccines that are effective against the strains that are predominating in the UK and that should be clear in everybody’s minds, that we’re not in a position where vaccines have suddenly stopped working entirely.”

He added: “There is a position in South Africa, not actually just with the Oxford vaccine but with all the vaccines, that a strain has evolved which is relatively more resistant to the vaccine immunity.

“The strains that predominate in the UK at the moment are still highly efficiently prevented by the vaccines that we’ve got and we should really continue to move forward and use those vaccines as fast as we can to get an impact on hospitalisations.”

Meanwhile, another leading UK expert has warned that there’s a chance there could be another Covid wave later this year of a variant “we’re not prepared for”.

Professor Andrew Pollard, who led the Oxford vaccine team, told MPs on the All-Party Parliamentary Group on coronavirus today: “We don’t know what the next wave of spread will look like.

“It could well be that it’s with a variant that we’re not prepared for and then there’ll be further spread afterwards.”

He said all the data from vaccines so far suggests that the current jabs will have a “big impact on severe disease”.

He said: “There’s a high chance, I think, that we could be in a position later in the year where there’s a new wave of spread but as long and we’ve got lots of people vaccinated in the population we won’t see so many severe cases at all and we’ll be getting ahead of that bit of it, but we may have a much bigger problem in stopping transmission.”

It comes as toughened measures to prevent imported Covid variants gaining a foothold in the UK will be set out by ministers today.

People isolating at home will be told they must get a test two and eight days into their 10-day quarantine period.

The Department of Health and Social Care (DHSC) said the move was designed to provide a “further level of protection” enabling the authorities to track new cases more effectively.

Coronavirus UK: UK adults to find out when they’ll get jab ‘in weeks’