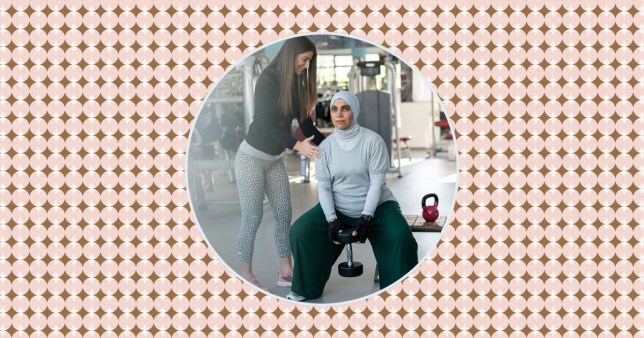 You don’t have to quit exercise completely while fasting (Picture: Getty)

For those that are fasting during Ramadan, there’s going to be an undeniable impact felt on their energy levels.

And just because someone is fasting, it doesn’t mean they’ll want to give up on exercise if it’s a core part of their daily routine and benefits their mental and physical health.

However, of those looking to keep up a fitness regime, a recent study for Sports Direct found that 80% of the Muslim men and women aged 18-35 who were surveyed said they are concerned about how to how to do this safely while fasting.

The survey also found that 25% of Muslims in this age group train less during Ramadan and almost a third feel there isn’t enough advice out there on training during this time.

An obvious concern for nearly half of those surveyed is feeling hungry and thirsty after training, while for 38% it’s the need to preserve energy that makes them refrain from exercise.

Haroon Mota, who is a Muslim runner and an ambassador of Sports Direct’s Fast & Slow campaign, tells Metro.co.uk that he’s currently running 10k every day.

‘I know that might sound drastic, but the key here is that I’m running super slow compared to the intensity I’d typically train at.

‘This means much less exertion and a lower heart rate.

‘I have good fuelling and hydration strategies that help me continue training on consecutive days, though I wouldn’t recommend this type of training (10k every day) for everyone,’ he says.

Rather than trying to up your workout game during this time, it’s about working within your limits and being smarter about what exercise you take up – for Haroon, 10k is within his limits.

‘Importantly I’m listening to my body and won’t be shy to miss a day or more if I feel I need some rest,’ he adds, while explaining that last Ramadan he ‘learnt a lot’ about his body and its limits, so he’s more confident in his approach now.

These are his tips for those wanting to train while fasting.

Go at a lower intensity

Haroon says low intensity training is essential to his own process, taking out some of his usual higher impact exercises.

‘It’s just less taxing on the body and of course less dehydrating, which is a big consideration for prolonged efforts.

‘My typical Ramadan run is more of plod than a run. I like to run and feel happy. I do this by reflecting, contemplating and praying during my runs, and usually whilst listening to the Holy Quran.

‘It’s the one thing that makes running in Ramadan rather special. A special spiritual experience,’ he says.

Though it might feel frustrating if you’re already lowering the impact of your workouts, it’s essential to prioritise sustaining energy throughout the day – especially if you train early.

‘During Ramadan I’m not doing any long runs.

‘Usually on a weekend I’d run 10 or more miles in the morning then play football in the afternoon. There’s no way I’m doing that in Ramadan.

‘My Ramadan 10k runs usually last about an hour, and I get this done just before sunset,’ Haroon shares, as this is how his exercise routine is sustainable during Ramadan.

As well as stretching and eating enough carbs, Haroon watches his hydration levels closely during and after a workout.

‘I weigh myself before and after runs to help monitor fluid loss, and typically lose 1-1.5kg, so it’s really important that I pay attention to my hydration.

‘I don’t go to sleep until I’ve drunk at least three litres of water, and often this means forcing myself to stay awake until I’m done.

‘I’m also taking on electrolytes to compensate for salt loss in sweat, especially now whilst the weather is getting warmer,’ he says.

He’s also a big fan of a nap if you can fit it into your day.

Always found your hamstrings to be tight? This could be the perfect time to work on them, or any other weak spots.

Haroon says: ‘Use the Ramadan down time to focus on aspects of fitness that are often neglected, or perhaps work on your weaknesses.

‘For me that would be spending more time on flexibility and core strength work.’

This will benefit your form and ability when training back at full capacity.

Reframe how you feel about exercise

For some there will be worries about becoming less fit if you decrease your exercise routine, but Haroon says to steer your mind away from this.

‘Don’t be too concerned about losing fitness in Ramadan. Consider this a great opportunity to refresh your mind and body.

‘Prioritise rest and focus on preparing your mindset for post Ramadan goals,’ he says.

He also believes this can be a great time to train for a cause as charity ‘is a massive pillar of Ramadan’.

This can motivate you to think about fitness in a way that benefits others.

Haroon is running the Ramadan Challenge 3.0 which people from across the globe can get involved in.