A THIRD wave of coronavirus WILL hit and it’s a “matter of when, not if,” the Welsh First Minister warned today.

Mark Drakeford refused to rule out the need for a fourth lockdown, because he believes the deadly bug may create even more “unpleasant surprises” for Brits this year. 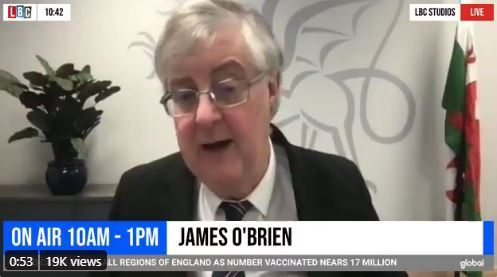 This comes after Mr Drakeford set out Wales’ plan to open up after lockdown – with primary schools reopening first.

When asked by James O’Brien whether he believed life would be back to normal by this year, the Welsh First Minister said simply “No, I don’t believe so.”

Mr Drakeford told LBC today: “Our chief medical officer said to me this week that he believes a third wave of coronavirus is baked into what will happen during this year.

“And we’re not talking about if there will be a third wave, we’re talking about how we can act to make sure that that third wave doesn’t affect us in the way that the wave we’ve seen over this autumn and winter has done.

“Hopefully, of course, in ways that still allow us to go about more of our lives as we would wish to.”

Asked whether he would put odds on a fourth lockdown, he said: “I’m certainly not going to say to anybody that we can guarantee that we won’t need one.

“I just don’t think that coronavirus is a business like that.

“Every week we are learning of new developments in other parts of the world.”

Mr Drakeford told listeners that there are already cases of the South African, Nigerian and Kent variant in Wales.

He added: “At any time, this virus could have further unpleasant surprises for us.

“Nobody sensibly can simply say that there is no chance at all that we won’t face difficulties again in the future.”

In Wales, primary school children will be back in the classroom on Monday and non-essential shops and hairdressers could reopen within three weeks under plans to unlock.

Mark Drakeford set out the “cautious” timetable for rolling back restrictions in a move that will further add to calls from Tory MPs for Boris Johnson to speed up the easing of curbs in England.

He announced kids between three and seven will return to school from Monday, with all other primary years plus secondary students in exam years set to return on March 15 if the data stays positive.

Schools in England aren’t due to go back until March 8 at the very earliest.

The stay at home measures will stay in place for another three weeks, however, he said.

But from tomorrow, four people from two different households will be allowed to exercise outdoors together to help those struggling with lockdown, he announced at lunchtime.

Mr Drakeford told a press conference: “This does not mean that it is permissible for people to drive somewhere to exercise and it does mean exercise, not socialising.”

Cases of coronavirus in Wales are at the lowest level since the end of September – and the R number is still below one.

The next review will be held in the week of the 8 March – and getting kids back to school will be the priority.

He added: “If things remain on track, our aim still be for all children returning to face to face learning from the 15 March.”

Almost 840,000 people in Wales had received their first dose of the Covid-19 vaccine, equivalent to one third of the country’s adult population.

And they are on track to hit the target of vaccinating all over 50s by the end of April too.

Are You The One season 1: Amber and Ethan are still together