CASES of Covid-19 are rising in 31 areas across England and this interactive map reveals the rates in your local area.

Official data from Public Health England (PHE) shows that cases have fallen in 289 areas (90 per cent) – as the third national lockdown starts to take effect.

There is just one area where cases have remained the same and that is Rutland in the East Midlands.

Just 10 per cent of areas have seen a rise, a sign that infections could be slowing across the country.

But Home Secretary Priti Patel last night warned that we were a “long way off” discussing the relaxation of rules.

Speaking at a Downing Street press conference she said: “The sacrifices that millions of you are making day in and day out are starting to make a difference.

“By staying at home you are helping to keep those you care about safe and contributing to this national effort.”

While cases are decline in some areas – there are 31 areas that have seen an increase in infections in the seven days to January 17. 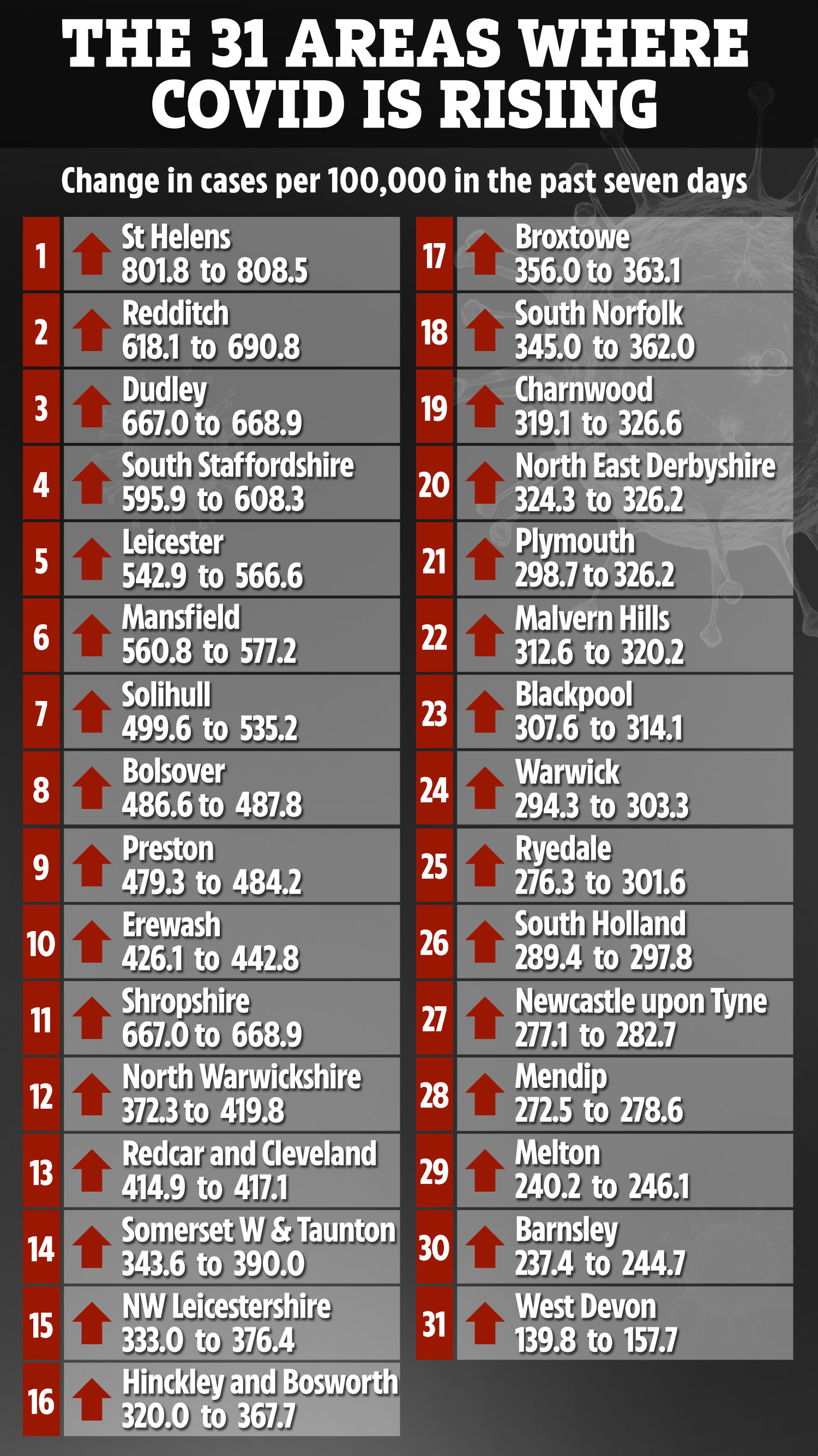 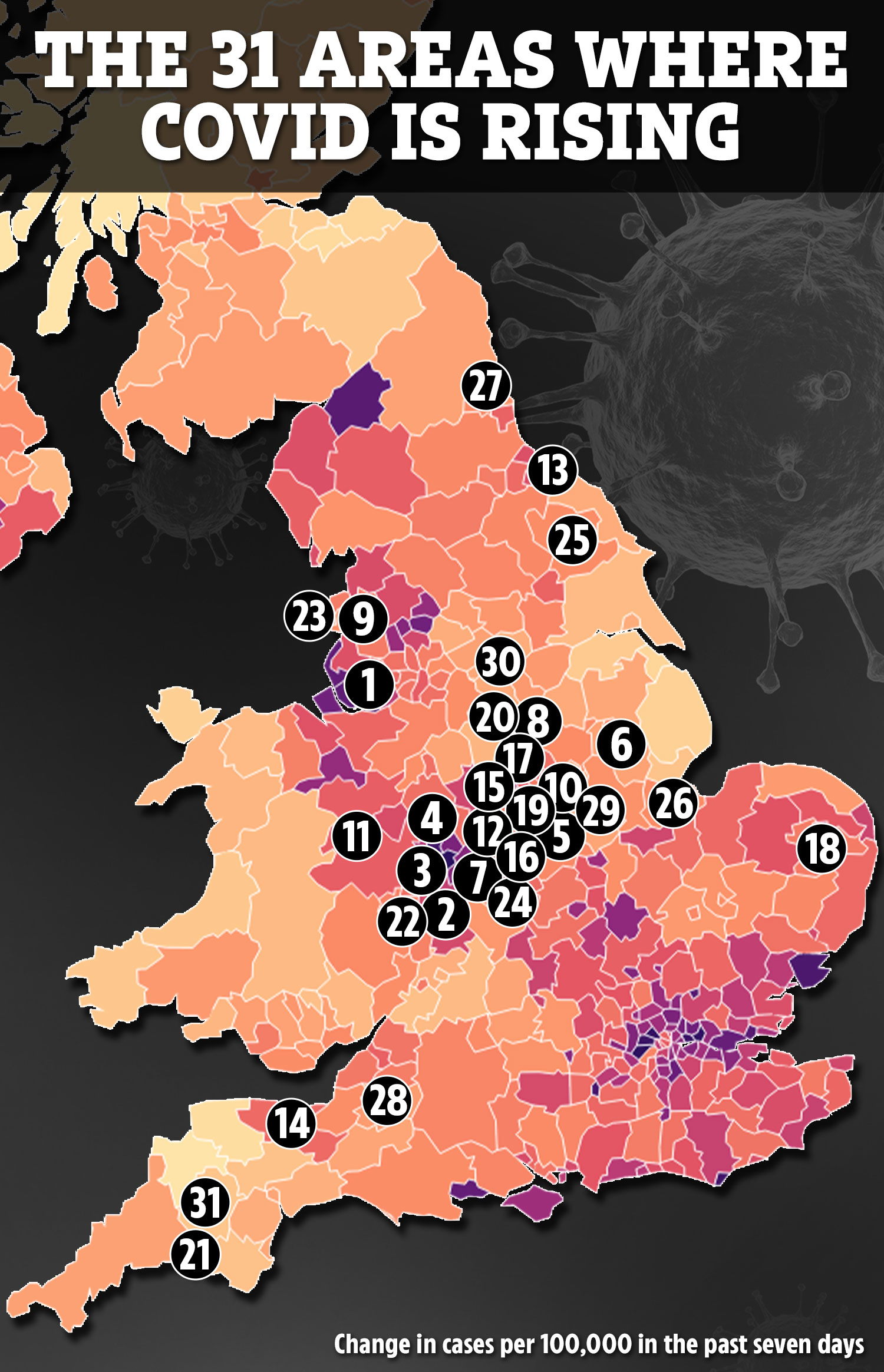 Places such as St Helens, Redditch, Dudley, South Staffordshire and Mansfield have all seen increases.

The area had previously been a coronavirus hotspot and when the first lockdown was lifted in summer 2020, residents in Leicester were forced to continue living under strict measures.

The Mayor of Leicester, Peter Soulsby previously said that the area had “been forgotten”, due to the fact that people had been living under restrictions for months on end.

Other areas that have seen an increase include, Solihull, Bolsover and Preston.

As the battle to fight the virus continues in the northern city, residents have been asked to take part in a Covid prevention trial.

The trial is being run by Astrazeneca and has been put in place to try and establish what treatments can be give to people who are unable to take the coronavirus vaccines currently being rolled out.

Erewash, Shropshire, North Warwickshire, Redcar and Cleveland and Somerset West and Taunton have also seen a rise in infections.

North West Leicestershire is also on the list and cases there have jumped from 333.0 to 376.4 adding even more misery to residents in the Midlands.

Hinckley and Bosworth, Broxtowe, South Norfolk, Charnwood and North East Derbyshire have all seen a rise in infections.

A new outbreak in the port city was found at a specialist care facility in the area and the local council said the facility had been working hard to make sure all precautions had been taken to stop the outbreak accelerating further.

Other areas that have seen an increase in cases include; Mendip, Melton, Barnsley and West Devon.

Prime Minister Boris Johnson is set to give a press conference at 5pm tonight after record death rates were seen this week – and urge people to continue to stay inside to reduce the pressure on the NHS.

Mr Johnson is due to meet his Covid “war committee” today amid fears this lockdown is not as effective in driving down the virus as last spring.

Others like the Home Secretary and Transport Secretary are also invited occasionally if discussions and decisions stray into their areas.

There are growing concerns in Government that the crucial “R” rate of virus reproduction is not falling as quickly as it did in last April.  Some ministers fear fresh clampdown measures will be announced next week with even tougher border restrictions high on the agenda.

UK Covid deaths rise by another 1,290 after deadliest day EVER and 37,892 more new cases