COVID-19 infections are still rising in 16 areas in England and this interactive map reveals if your local authority is on the list.

Official data from Public Health England (PHE) states that cases have fallen in 95 per cent of areas (298).

The latest data from PHE comes as a major study revealed that infections have dropped two thirds since January.

Infections are halving every 15 days – which is good news for the Prime Minister as he gets ready to reveal the roadmap to get us out of lockdown.

As the React study states infections have fallen, the PHE data says they are still rising in 16 areas. 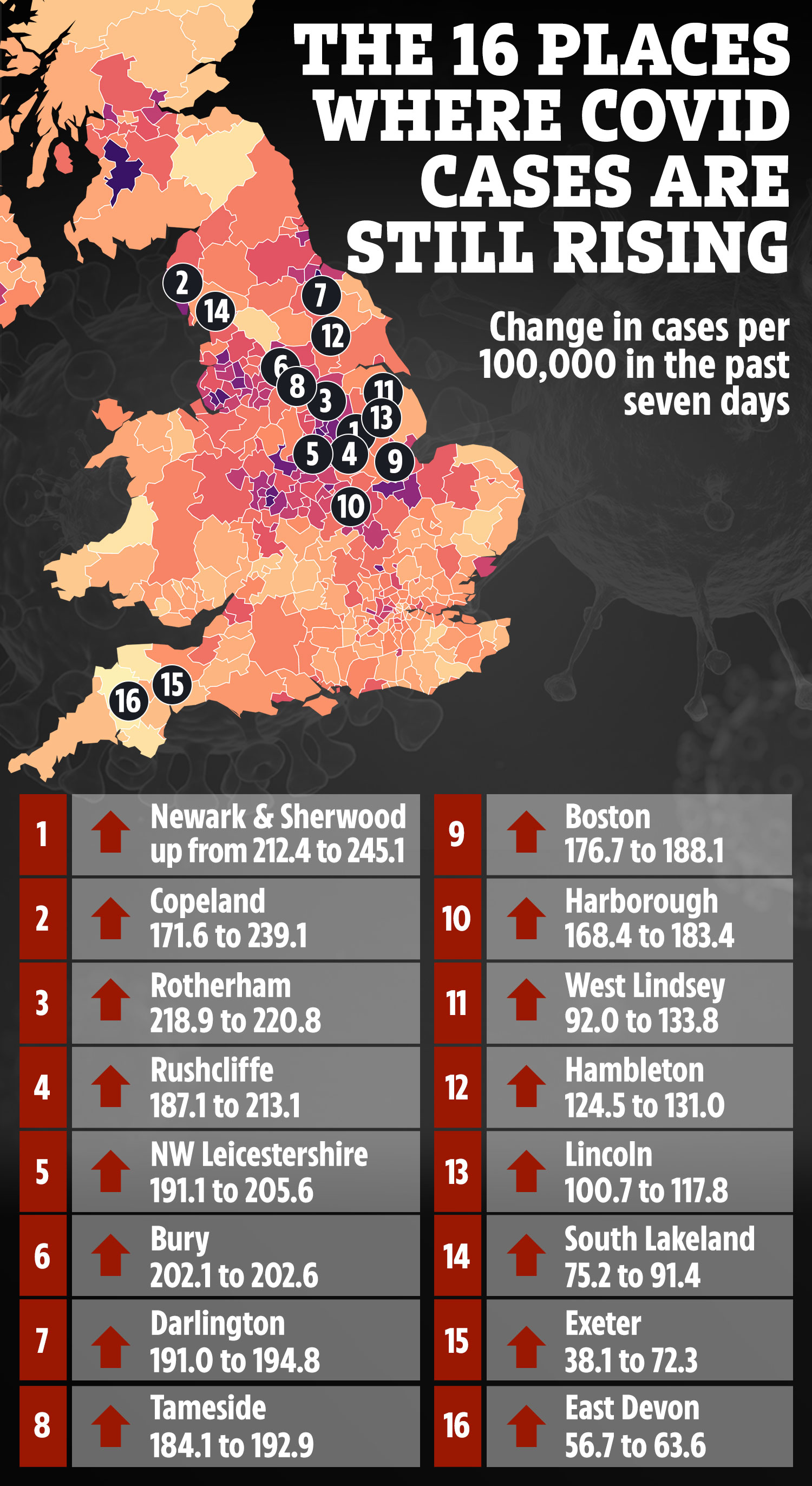 A new mass testing site has this morning opened in the area for people who aren’t displaying any symptoms.

Copeland in Cumbria has also jumped from 171.6 to 239.1 and a spokesperson for the local council this week said that the increase was mainly down to a few small outbreaks that were being “closely monitored and contained”.

Despite this Copeland Borough Council’s Carl Walmsley suspected that people in the area had “let their guard down”.

He said: “I cannot stress enough that this is nowhere near over, we need to remain vigilant and follow guidelines at all times.”

Infections have also increased in Rotherham in South Yorkshire, from 218.9 to 220.8. 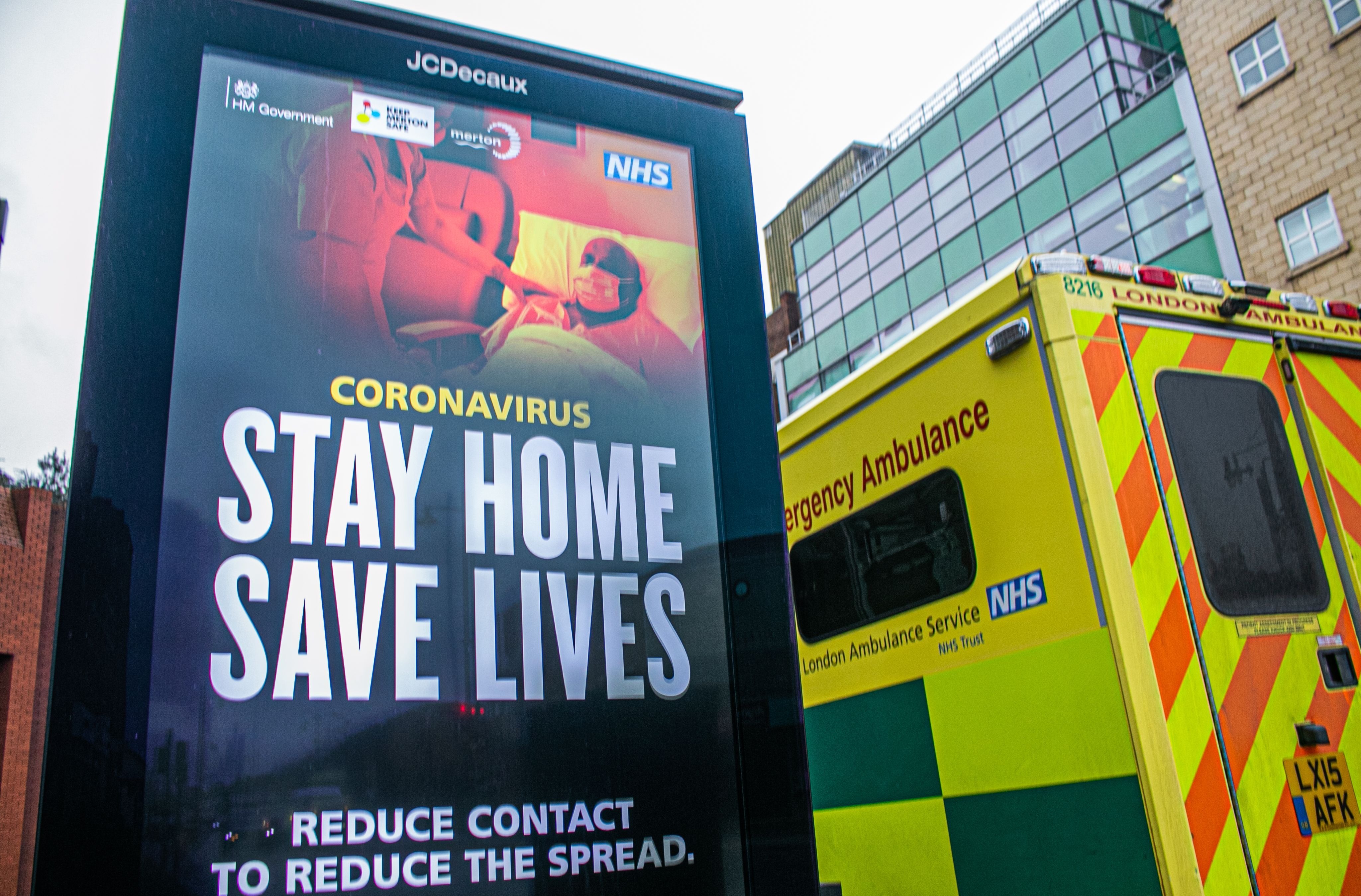 Brits have been urged to stay at home in order reduce contact with others in order to fight the virusCredit: Rex Features

Also in the Midlands and North West Leicestershire has jumped from 191.1 to 205.6.

Since the start of the pandemic the area has witnessed 5,220 cases.

The local health director has branded the increase in cases as “concerning”.

Bury’s Director of Public Health, Lesley Jones has put the increase down to the fact that the town has more essential workers than most.

Over 95 per cent of cases in Bury are also down to the Kent variant.

Ms Jones added: “It is difficult to pinpoint exactly why this is happening, but our data would suggest that this may be due to a differential impact of the lockdown measures within the population.

“For example, the higher rates are concentrated within those areas where people are more likely to still need to go to out to work as opposed to being able to work from home.”

Darlington in County Durham has also seen a rise in infections, going from 191 to 194.8 in the last seven days.

Another area where cases are on the up is Tameside in Greater Manchester, where cases have climbed from 184.1 to 192.9.

This means that in the last seven days the area has seen 437 new cases – which is 40 more than the previous week.

West Lindsey in Lincolnshire has seen cases go from 92 to 133.8 in the last week.

Hambleton in North Yorkshire has gone from 124.5 to 131 and frontline social care workers in the area were urged to sign up to get the vaccine in order to stop the transmission of Covid-19.

Despite a rise in cases in the area, it was reported today that over two thirds of Covid patients across Lincolnshire Hospitals Trust have been discharged since the start of the pandemic.

South Lakeland in Cumbria has also witnessed an increase in cases from 75.2 to 91.4.

While the 16 areas above have all seen a rise in infection rates in the last seven days, the most infected areas in the country have seen a drop in cases.

Corby in Northamptonshire has the highest rate in England, with 228 new cases recorded in the seven days to February 13 – the equivalent of 315.7 cases per 100,000 people.

Just one are in England has remained static – with North Devon remaining at 25.7.

UK Covid deaths fall by more than a QUARTER in a week with 738 fatalities and 12,718 cases in past 24 hours

Facebook removes its own page by mistake in Australia news purge