CORONAVIRUS infections are still rising in ten areas in England and this interactive map reveals if you area is one of them.

Data from Public Health England (PHE) states that 97 per cent (305) of areas have seen a fall in cases over the last week.

The official figures come after it was revealed that restrictions such as the rule of six are likely to be in place for the rest of the year.

Today Professor John Edmunds said that weary Brits could be facing tough laws to combat the spread of the virus until 2022.

The grim prediction comes after it was yesterday reported that Covid deaths in the UK dropped by a quarter in a week as 1,001 more died with cases down by a third.

While deaths are falling, there are still ten areas where case numbers are increasing. 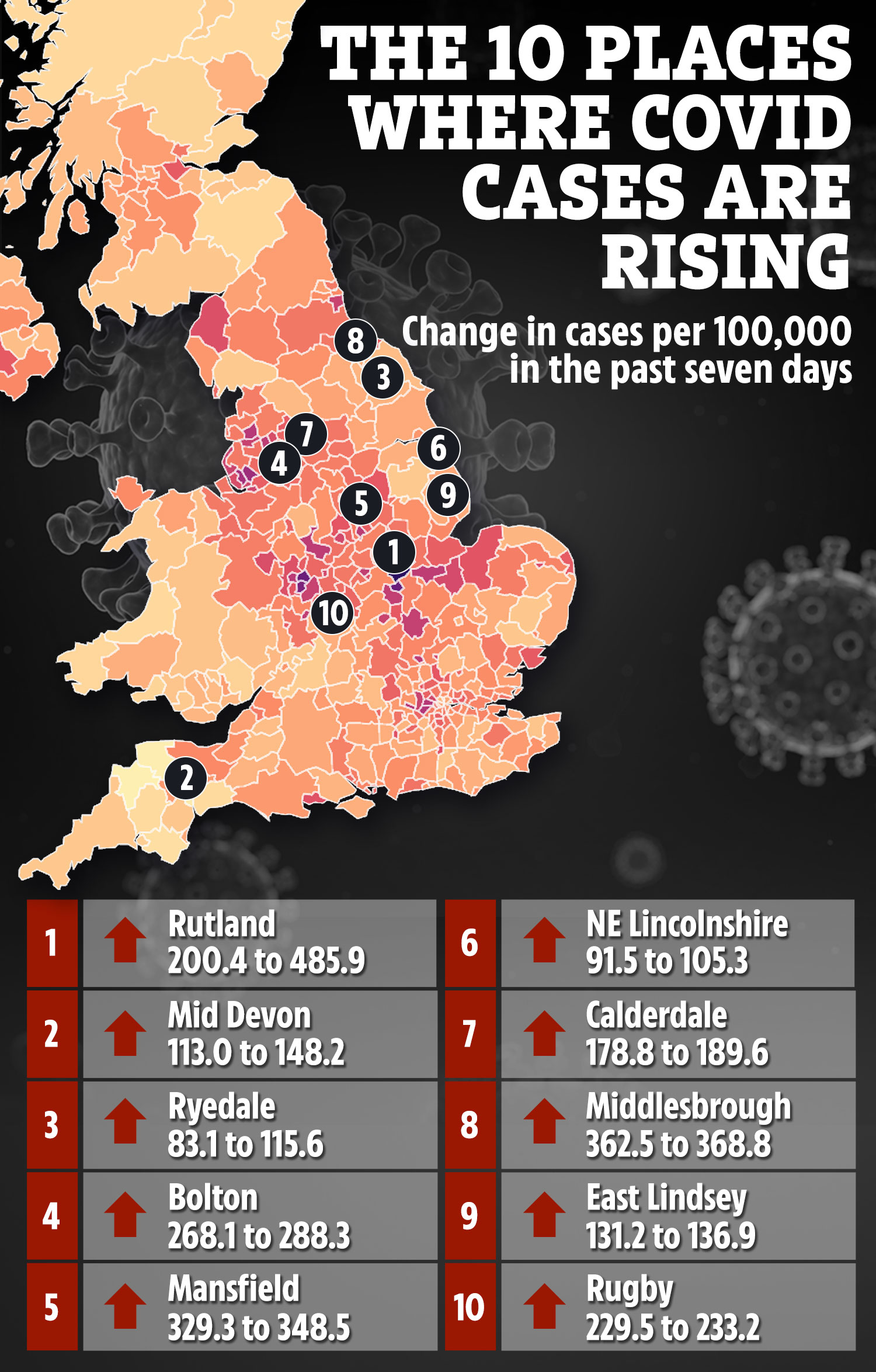 Rutland in the East Midlands continues to have the highest rate in England, with 194 new cases recorded in the seven days to February 6 – the equivalent of 485.9 cases per 100,000 people.

This week Rutland and Melton MP Alicia Kearns confirmed that a large amount of the cases in the area were due to an outbreak in HMP Stocken.

She said around half of all cases in Rutland were believed to be from the prison.

Mid Devon has also jumped from 113.0 to 148.2 and health chiefs in the areas have urged people to be vigilant to tackle the spread.

Steve Brown, Devon’s public health chief said he was “concerned” about the amount of cases coming out of work places and urged people to continue to follow the rules during their down time. 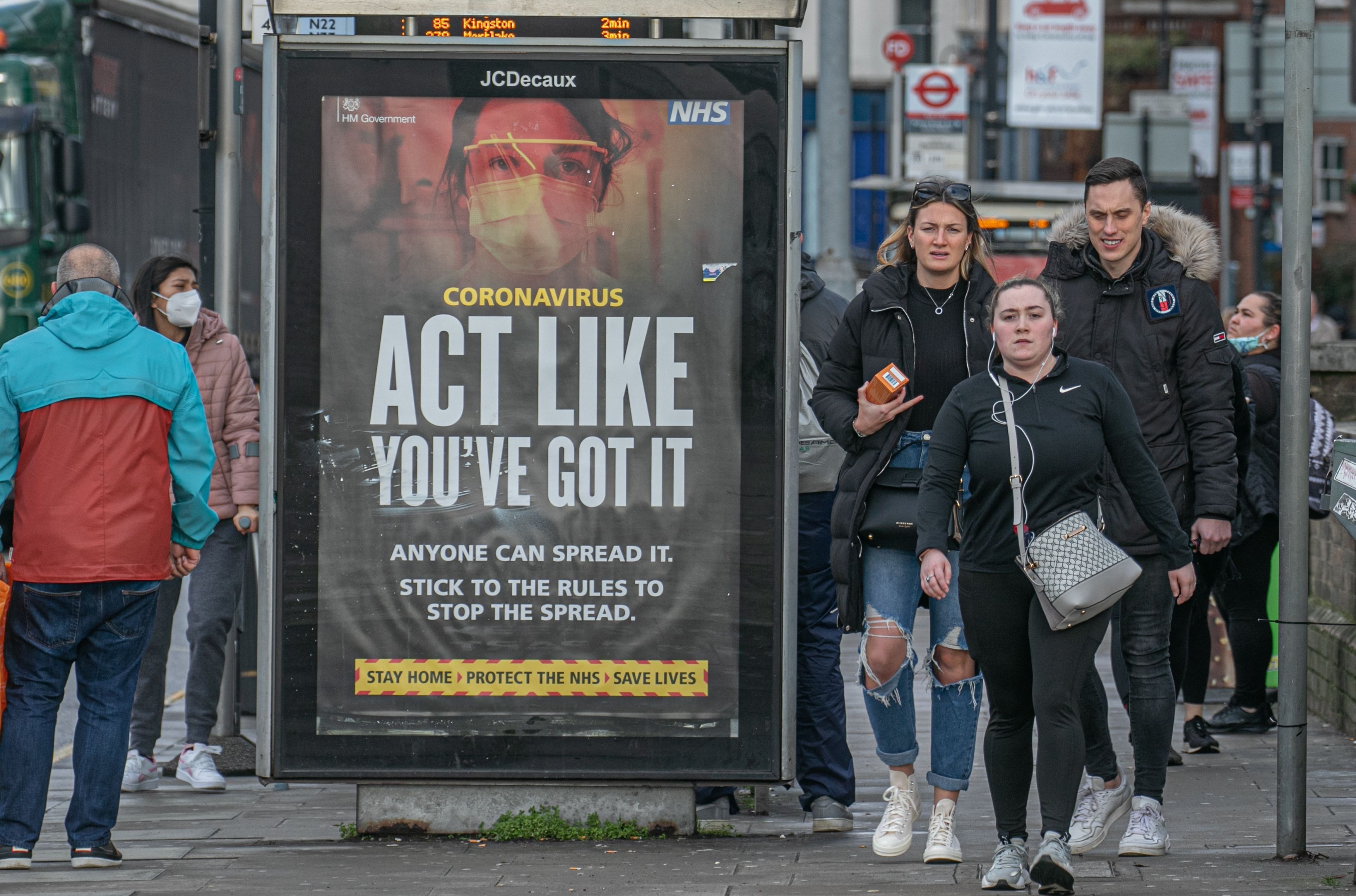 People across the UK have been urged to stick to the rules in order to stop the spread of the virusCredit: Rex Features

Ryedale in North Yorkshire has also witnessed an increase, going from 83.1 to 115.6.

In the last week police in the area issued 169 fines across North Yorkshire for breaches of Covid-19 rules, three of which were in Ryedale.

Mansfield in Nottinghamshire also saw a rise in infection rates, going from 329.3 to 348.5.

An epidemiology report by the local council found that the Kent variant is now present in 79 per cent of cases in the area.

Looking to West Yorkshire and Calderdale is also another coronavirus hotspot with cases there having risen from 178.8 to 189.6 in the last seven days.

Councillors in the area have called for front line staff to be vaccinated, the Halifax Courier reported.

Steven Leigh, who leads the Conservative group on Calderdale Council said: “Of course, it is an individual’s choice whether they do or not.

“But should patients have a reasonable expectation that front line staff, for example the person giving them the inoculation, have themselves been inoculated.

“Should a condition of being a front line practitioner be that a person has been inoculated in the interest of the patient and the public?”

Looking further north to the North East and infection rates in Middlesbrough have gone from 362.5 to 368.8.

Yesterday the local council launched three rapid coronavirus testing centres so that locals who do not have symptoms can go and get tested.

While the ten areas above have seen a rise in infection levels, some of the most infected areas in the country have seen a fall in cases.

Body of woman in her 20s pulled from river after man, 24, arrested for murder as cops trace bloody trail