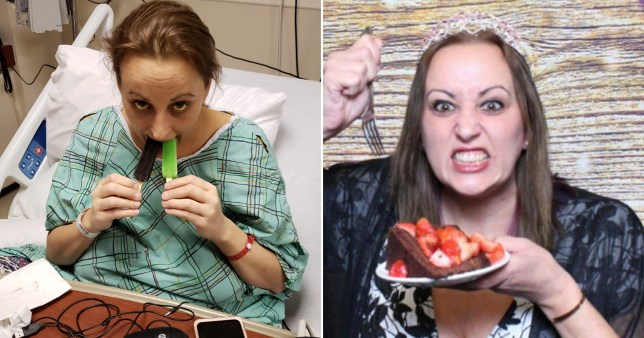 Sara’s own body makes her drunk – even though she is teetotal (Picture: PA Real Life)

A teetotal mum whose own body makes her drunk, is hoping a last-ditch treatment will mean she can have the liver transplant she desperately needs.

Frequently mistaken – even by doctors – for an alcoholic, Sara Lefebvre, 38, has auto-brewery syndrome (ABS), a rare condition where yeast in the stomach produces excessive quantities of ethanol, or grain alcohol, which travels into her blood and makes her intoxicated.

In the past, breathalysers have found her to be six times the drink-drive limit – despite not drinking at all.

It has led to her falling over and breaking bones, as well as passing out – and, on one occasion, lying outside her house for hours in below-zero temperatures, where she risked freezing to death.

Finally diagnosed in February 2020, Sara, who lives in Connecticut, USA, with her husband and two teenage children, is now pinning her hopes on a new antifungal drug, Micafungin, making her well enough for a liver transplant.

Until her symptoms are controlled, the former hospital IT administrator says surgeons will not give her a new organ. 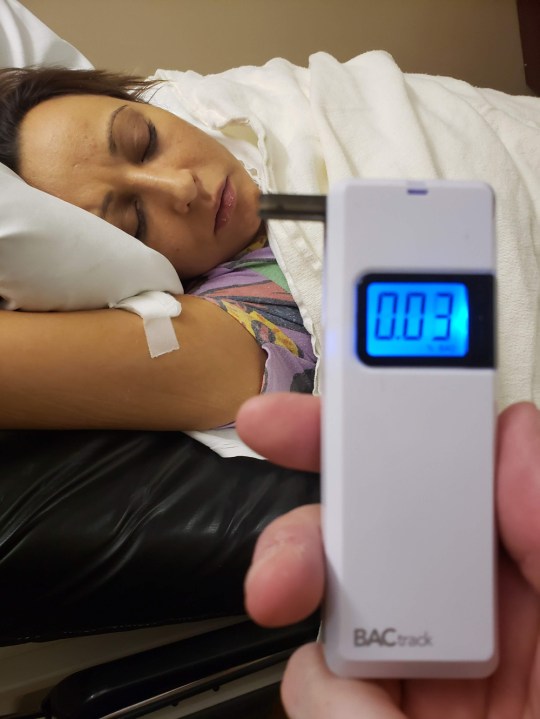 ‘It has been so upsetting, not just because of what I’m facing but because so many doctors don’t believe auto-brewery syndrome is a real condition.’

Sara says her symptoms first appeared in her early twenties, when she would occasionally pass out or be sick at random.

It was after her 23rd birthday that she risked freezing to death, as, still consuming some alcohol at that time, after a meal and a few drinks, a pal dropped her off at around 12.30am outside her then home in Pittsfield, Massachusetts.

But her friend drove off before she went inside and she collapsed outside, where she lay for six hours in temperatures of -1 C, wearing just a t-shirt and jeans, while Ant slept soundly inside with their children.

‘I don’t remember what happened, but I eventually woke up feeling incredibly cold and went into the house,’ she says.

‘When I spoke to my friend afterwards, she said I seemed absolutely fine before she drove off.’

As her falls and bouts of unconsciousness became more frequent over the years, Sara left doctors baffled.

Then, around seven years ago, her symptoms started to closely mimic drunkenness – with slurred speech and personality changes – which the couple thought were caused by concussion from her falls.

‘I have fallen down the stairs and even fell asleep in the laundry basket once, waking up with one sock on and one sock off,’ she explains.

‘When I’m intoxicated, I don’t feel pain. It’s only afterwards that I hurt all over.

‘I’ve broken around six bones in total – including two ribs, and I didn’t even realise.’ 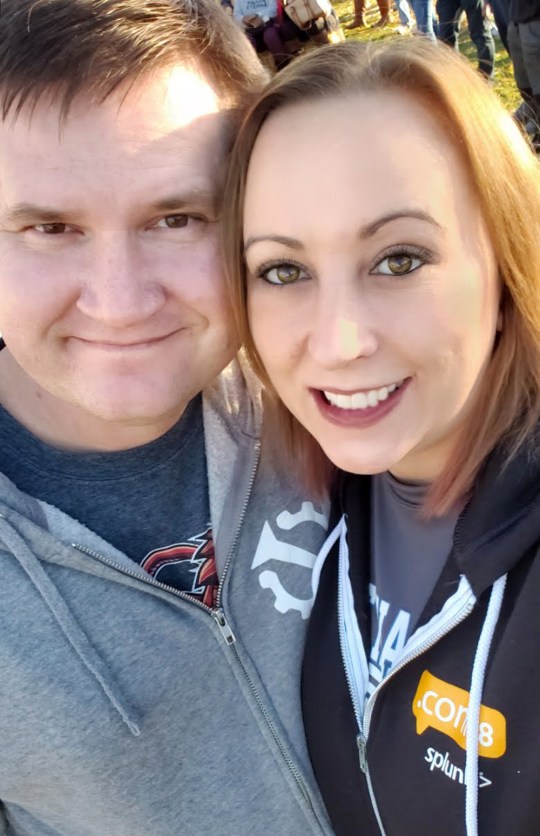 Sara has been forced to give up work because of her condition, and she had no idea how damaging they were for her liver.

In January 2019, she was diagnosed with liver disease and doctors attributed her strange behaviour to hepatic encephalopathy, where the brain stops working properly because of liver failure.

Having given up drinking just weeks before her diagnosis, she was put on lactulose, a sugar-based laxative, used to treat the condition – but the yeast in her stomach feasted on the drug, reacting with the sugar to create ethanol and causing her ABS to spike.

To make matters worse, Sara’s condition meant she craved sugary treats – but she was unaware they were making her even more intoxicated.

After her liver diagnosis, Sara quit drinking for good – but blood tests showed high alcohol levels, meaning she was taken off the transplant lists at two local hospitals.

Believing his wife when she told him she was not drinking, Ant turned detective in a bid to discover what was causing the alcohol in Sara’s blood.

He even threw out household cleaners containing alcohol and hired a nurse to monitor her and prove her sobriety. 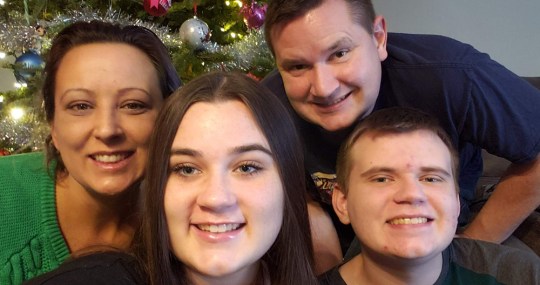 Sara with her family before her ABS diagnosis (Picture: PA Real Life)

The lightbulb moment came in December 2019, when she collapsed in her basement studio at home.

Found by her daughter and taken to hospital, there a nurse decided to give her a breathalyser test, which showed her to be three times over the drink-drive limit.

Buying several breathalysers the next morning, Ant tested his wife throughout the week.

On each occasion, the test showed her to be drunk, yet she had not consumed alcohol or left the house.

When the nurse they hired found a Facebook group for auto-brewery syndrome, everything started to fall into place.

The couple contacted a specialist in Staten Island, New York, who eventually diagnosed her with auto-brewery condition in February 2020.

The condition is so rare its prevalence is almost unknown, although Sara and Ant, who have joined a Facebook support group for sufferers, believe fewer than 100 people have been diagnosed with the syndrome.

Advised to cut out sugar and carbs, which the yeast was turning into alcohol, this has improved her condition considerably.

‘I used to love sugary things like sweet tarts, but now I have a very limited diet – scrambled egg for breakfast and green leafy vegetables with meat for dinner,’ says Sara.

Now suffering from jaundice, which turns skin yellow, because of her damaged liver, Sara is in desperate need of a new organ.

But, while her blood alcohol levels remain higher than average, no hospitals will operate. 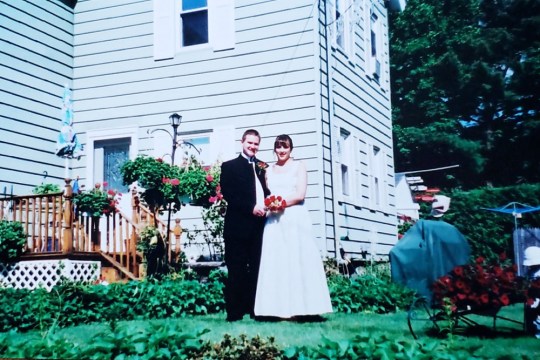 On October 20, 2020, Sara recorded her highest blood alcohol reading yet – 449 milligrams per decilitre, almost six times the US drink-drive limit – after Ant took her to hospital following yet another fall.

‘The doctors told me I should be in a coma, and that I shouldn’t be able to talk or walk around,’ she says.

‘I felt terrible hearing that. I was so confused, but I must have built up a tolerance to the alcohol.’

With anti-fungal medications failing to subdue the yeast, Sara is hoping Micafungin, an even-stronger drug delivered through a catheter directly into her bloodstream, could finally be her saviour.

Sara is horribly aware of the strain her condition puts on her family – particularly her children.

She says: ‘They love me, but it’s like I’ve got two versions of myself – sometimes I’m me, and sometimes I’m not me. And when I’m not me, I’ll get loud and yell at them a lot.’

Sara’s husband Ant, who works at home, has to be on high alert every waking minute of the day.

‘I’m always terrified of what Sara is going to fall into, or how she might hurt herself. It is like a living nightmare,’ says Ant.

‘If I hear thudding or crashing upstairs, I know what has happened and I have to rush up there to pick her up and make sure she’s alright.’

He admits the condition has put a huge amount of pressure on their family – but they are all determined to support her however they can.

‘The kids are used to it no – unfortunately it is their new norm. They know it isn’t her fault, but at the same time, it has been taking a toll on our family,’ he says.

‘It isn’t easy, but the kids have been very resilient.’

What I Rent: Caitlin, £1,050 a month for a two-bedroom flat in Bristol