Super-helper syndrome: Why some people can’t stop helping others 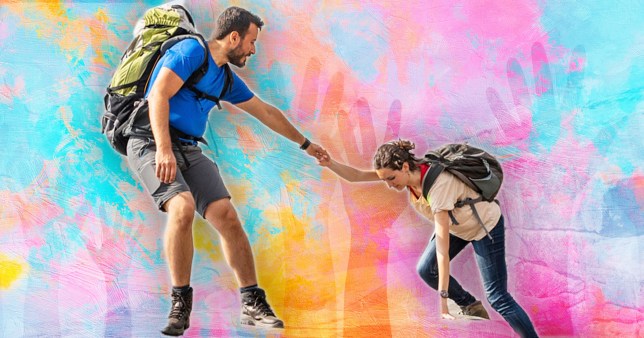 Do you find that you can’t stop yourself from helping others, even when it hurts you? (Picture: Getty/Metro.co.uk)

If you have super-helper syndrome, you have a compulsion to help other people – so much so that you can fail to look after your own needs.

It’s more common than you might think, and it’s a trait you might observe in yourself or others; those people that can’t stop themselves helping.

But why are some people so driven to help? Is it a learned behaviour, or something in their DNA?

That’s something psychologists Jess Baker and Rod Vincent explore in their book, The Super-Helper Syndrome – A Survival Guide For Compassionate People.

‘Some super-helpers are in the helping professions but many of them aren’t,’ say Jess and Rod. ‘They can range from lawyers and accountants to the self-employed, mums, teachers, nurses, therapists and social workers.

‘What they have in common is that they are 360-degree helpers, helping in all aspects of their lives.

‘People who are susceptible to the super-helper syndrome are all around us. They are the problem-solvers, the mediators, the fixers who can’t resist any opportunity to help. There is usually one in every family. The friend that always helps in a crisis or lends an ear. They are reliable.’

Ahead, the pair break down four possible causes of being a super-helper.

For some super-helpers, it’s in their genes.

‘There is scientific evidence that helping can have a genetic component,’ say Jess and Rod. ‘Researchers have found that empathy is determined to some extent by our genes and have pinpointed the genes involved in this.’

Jess and Rod tell Metro.co.uk: ‘Some children (especially girls) are taught that they must help other people in order to be a good person.

‘If this socialisation is strong enough it can lead them to adopt what we call the Good Person Belief, one of the irrational beliefs that drive compulsive helping.’

An example of the Good Person Belief

Picture a little girl who finds one of her classmates crying in the playground with a grazed knee. She takes her to the school nurse who tells her she’s a really good girl.

After dinner, as she dashes off to play with her brothers, her mother calls her back, ‘Be a good girl and help me clear the plates.’

Later, she’s praised for reading her younger sister a story at bedtime.

Next morning, she is told off because she hasn’t made a birthday card for grandma. You get the picture!

A support worker who responded to the psychologists’ questionnaires listed this reason for her super-helping tendencies, explaining: ‘I got noticed when I was a good girl. Praise made me feel like I was good enough.

‘I can see where my people-pleasing comes from. Thirty-seven years of autopilot is hard to break.’

‘It’s hardly surprising when children begin to internalise their parents’ and teachers’ messages,’ Jess and Rod note. ‘They see themselves as good when they help; they criticise themselves when they don’t. They feed off the praise and rewards. They live in fear of these being taken away. They are on the way to becoming a compulsive helper.

Another childhood message that can create super-helper syndrome is one around suffering.

Jess and Rod say: ‘Other children are socialised by childhood messages that highlight the suffering around them or they grow up with role-models who attempt to alleviate that suffering.

‘While it is understandable to want to do what we can to alleviate the suffering of others, when this is taken to extremes it can lead them to adopt another of the irrational beliefs, a sense of personal responsibility to help everyone you meet.

‘Everyone else’s problem becomes your problem if you hold the Help Everyone Belief.’

Examples of the Help Everyone Belief

One woman had an alcoholic father. He had stopped drinking as soon as she was born. He became heavily involved in setting up an alcoholics’ support group. He would disappear on errands of mercy in the middle of the night. When she was old enough he would take her on missions to ‘go and see the poorly man’. Her deep connection with her father and these formative memories were still with her more than forty years later.

When he was little it was agonising watching the news with his mother. She’d huff at every report of famine and disaster around the world, scolding the politicians on the television. She was active in many causes. She traipsed door to door for Christian Aid, distributing and collecting donation envelopes. Every Sunday she stood at the back of the cold church in her Clothkits coat, behind a trestle table heaped with bags of Traidcraft coffee. The message he most vividly recalled was whenever her children were impatient for mealtimes. If he, or any of his brothers said, ‘I’m starving,’ she reproached them. ‘Don’t say that. There are children starving in Africa.’ Her four sons went on to be a nurse, a teacher, a social worker and a psychologist.

‘Some people metamorphose into helpers as a result of childhood pain,’ say Jess and Rod.

‘When we asked people why they became a helper, they often referenced their childhood. Many had experienced early deprivation or hardship. Some grew up with volatile or abusive parents.

‘Childhood trauma doesn’t necessarily make people into helpers. It sculpts them in many forms. But it does shape compulsive helpers out of some of them.

‘One example of this from our research was a dentist who described her mother as very hot and cold. She said it was the cold bits she remembered.

‘She told us how she needed love but would get nothing from her mother and how that rejection has impacted her own awareness of others. “I don’t want to upset anyone; I want to do right by them and help people.”‘

Some people are made to become helpers by circumstance, as someone else is dependent on them.

‘They may or may not be a natural helper but the circumstances they find themselves in or the responsibilities they face mean that they have little choice,’ Jess and Rod note.

‘Examples that readily come to mind are looking after a child with Down’s syndrome, a grandfather who has had a stroke, a partner injured in a car accident.

‘There are an estimated 6.5 million unpaid carers in the UK alone. Dependent relationships can also occur in the workplace. They are found across all occupations, where someone believes their patients, customers or the rest of the team couldn’t survive without them.’

What to do if you have super-helper syndrome

If you’re relating to this, don’t panic – there are ways to tackle the super-helper mindset and look after yourself.

‘For anyone who is helping to the point where they are finding it difficult to look after their own needs, the book provides solutions,’ they say. ‘It shows how to counter any irrational beliefs you might be holding. It shows that however difficult your circumstances when you are looking after a dependent, you deserve to have your own needs met too.

‘The book provides activities for the reader to profile and analyse their own helping relationships. It offers support for people who want to adopt a Healthy Helper Mindset, including meeting their own needs, building assertiveness and setting helping boundaries.

‘It guides the reader towards countering self-criticism with mindful self-compassion. It’s only by doing these things that compassionate people can be most effective at helping others.’

Jess Baker & Rod Vincent are Chartered Psychologists and authors of The Super-Helper Syndrome – A Survival Guide for Compassionate People on sale now in hardback (£18.99) and ebook published by Flint Books.