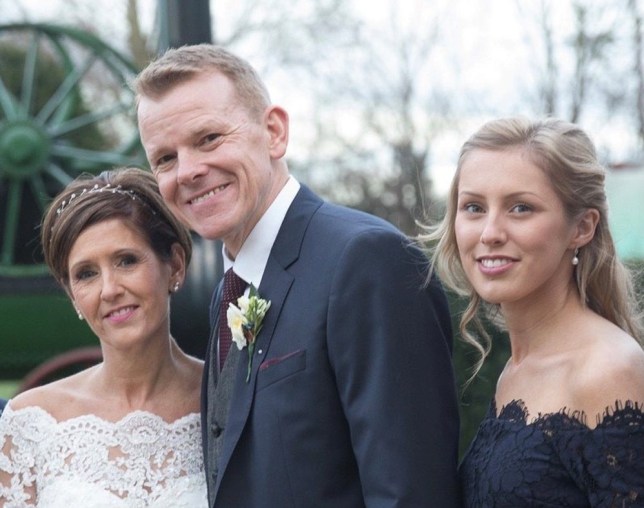 A 22-year-old student who put her pins and needles down to exam stress – only to be diagnosed with a rare, incurable spinal cord tumour – has raised £55,000 for vital research within weeks, to bring hope to other people like her.

Entering her final year studying business psychology at Loughborough University in Leicestershire, with dreams of becoming a primary school teacher, Emily Parsons, of Cottenham, Cambridge, had the world at her feet.

And in April 2020, when she began experiencing strange pins and needles in her hands and feet, at first she thought the stress of her upcoming exams was to blame.

But, by September, with her symptoms intensifying, she was referred to a neurologist for an MRI scan – revealing a tumour inside her spinal cord.

Just five weeks later, further tests led to her being diagnosed with a diffuse midline glioma – a rare and devastatingly aggressive tumour of the central nervous system.

Given only months to live, there has been no stopping the brave young woman, who has been using her precious time to fundraise for vital research projects – aiming to help others given her diagnosis in the future.

Emily, who lives with her brother Ben, 17, and 54-year-old parents – retired bank worker Lisa and stepdad Paul, who is also retiring from his finance job to help care for her – said: ‘How quickly all this has happened has been one of the worst parts. I had a normal life – then suddenly, I didn’t. 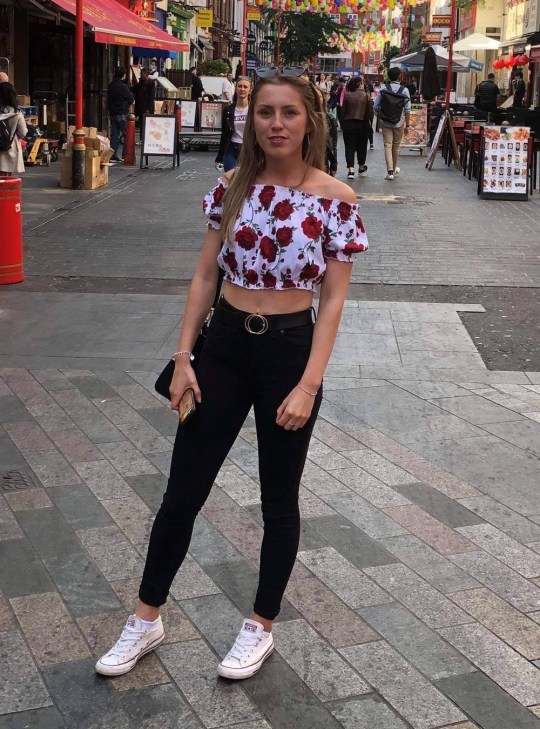 Emily went from healthy and happy to receiving palliative care in a matter of weeks (Picture: PA Real Life/Collect)

‘The deterioration has been very quick. In November, I could still walk – but by Christmas, I couldn’t.

‘The type of tumour I have is so rare that there’s no real information out there. I don’t want anyone else to go through this, so I’m determined to raise money to help with research.’

Hitting the gym five times a week, Emily was the picture of health before her diagnosis.

With her career mapped out, she had been in the process of applying for a postgraduate certificate in education so that she could become a primary school teacher, when the pins and needles first hit.

‘I had another scan to see if there were tumours anywhere else, which there weren’t,’ Emily said. 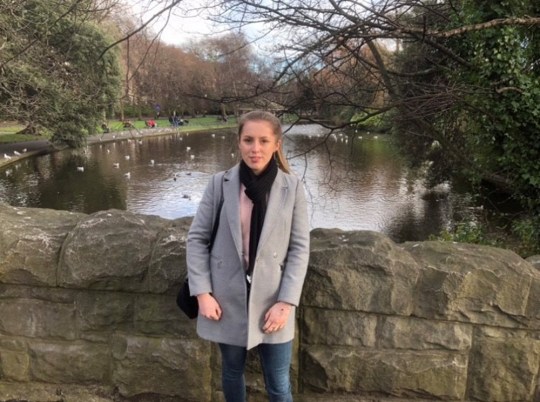 ‘The doctors told me that, because it’s rare for a primary tumour to be in the spine, it was likely the growth wasn’t cancerous.

‘That gave me some hope to cling onto while we waited for the results of the biopsy.’

But, five weeks later, the results confirmed that Emily’s tumour was, indeed, cancerous.

And just after her 22nd birthday, she was diagnosed with a diffuse midline glioma tumour, with a mutation known as H3 K27M, which is associated with a poor outlook.

According to the Brain Tumour Charity, diffuse midline gliomas – which are more commonly found in the brain than the spine – have an average prognosis of less than a year. 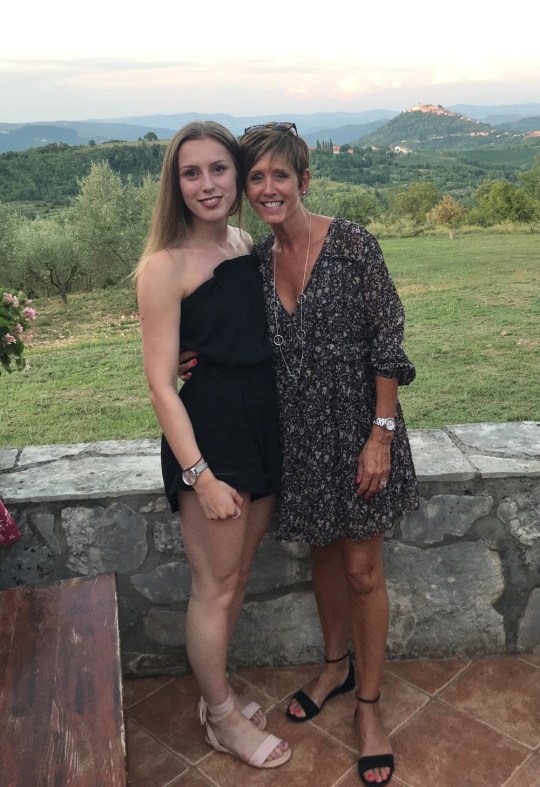 Emily’s mum Lisa is so proud of her daughter for fundraising (Picture: PA Real Life/Collect)

Around 10% of patients live for at least two years after diagnosis, while just two per cent survive for five years or more.

Unfortunately, patients with the H3 K27M mutation like Emily do not respond well to radiotherapy – meaning they tend to relapse sooner.

‘The doctors told us that only 100 people age three to 25 get this type of tumour in the UK each year – and sadly, all of them lose their lives,’ said Emily.

‘It’s very rare for it to start in the spine, too. There have been virtually no advances in treatment or research in decades.

‘I know it makes sense for more common cancers to get lots of funding, but people like me exist too and we need help and options.’ 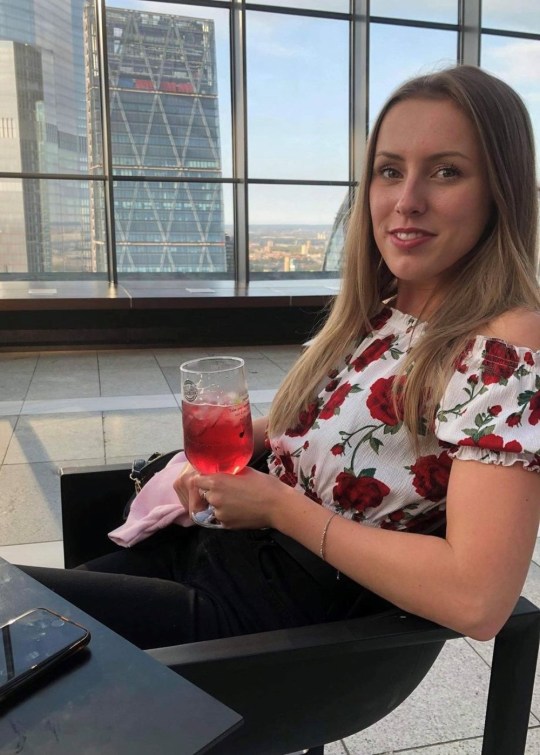 Because her tumour is incurable, all doctors could offer Emily was palliative care in the form of radiotherapy.

Sent home to be with her family following her bombshell diagnosis, just 10 days later, she suddenly lost control of her legs and was raced back to hospital, where an MRI scan showed the mass had already started to grow again.

‘I was put on steroids to reduce the swelling and given a shorter course of radiotherapy for just five days,’ she explained.

‘I was told that any more than that would risk further swelling in the spinal cord.’

While in hospital having radiotherapy, Emily was assigned Sophie, her own social worker from CLIC Sargent – the UK’s leading cancer charity for children, young people and their families – who went on to become an invaluable support. 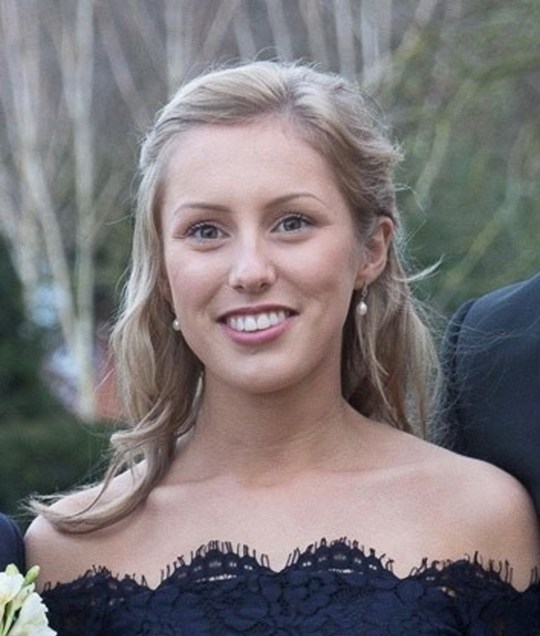 Emily now requires a wheelchair to get around (Picture: PA Real Life/Collect)

Helping both practically and emotionally, Sophie secured grants, provided information on finances and benefits and put Emily in touch with other charities, like Josie’s Dragonfly, who gifted her some cash to put towards something special.

At the end of November, Emily left hospital and is now under the care of Arthur Rank Hospice.

Sadly, her mobility has decreased further and she is now essentially paralysed, requiring a wheelchair and round-the-clock care.

Facing the future with remarkable stoicism, she is determined to use her story to help others.

‘During my time at home, after conducting further research into my cancer it was clear that there is so little information available about it,” she said.

‘There have been no advances in treatment options for years, which is unbelievable.

The money she’s raised can pay for a scientist to research the condition (Picture: PA Real Life/Collect)

‘I decided that I wanted to raise money to fund research in this area. Of course, ultimately finding a cure would be amazing, but even if I could help with something like literature for people just diagnosed, or a drug to slow the progression so the decline isn’t as rapid, it would make so much difference to people like me.’

Emily, who is currently on a cocktail of pain medication to manage her symptoms, set up a JustGiving page with a target of £10,000, which she never dreamed she would reach.

To date, over 2,000 people have donated more than £55,000 to her cause, with the money, so far, going towards a research project at Addenbrookes Hospital.

‘The project is specifically researching central nervous system spinal tumours with the H3 K27M mutation, which I have,’ Emily said.

‘The money will fund a senior scientist for one year, to find treatments and hopefully maybe even a cure. I also hope my story encourages people to listen to their bodies and if they think something is wrong, to keep pushing.

‘Sadly, it wouldn’t have made a difference for me, but perhaps reading this can save someone else.’

By Emily’s side throughout has been her loving mum Lisa, who remains incredibly proud of all that her selfless daughter has achieved.

She said: ‘Caring for somebody you love with no idea of how long you have together is incredibly hard and it’s been very frustrating for Emily to see no information out there about what she is facing.

‘One of the most difficult parts of this cancer is how totally debilitating it is. She’s gone from someone who went to the gym five times a week, to being disabled. It’s very stark, and very difficult to see.

‘Anything that could slow that progression so other families don’t have to go through this would mean the world.

‘But we, as a family, know that despite the physical changes, she’s still Emily and are so incredibly proud of her.’

Donate to Emily’s cause here.

Wilshere at Arsenal and Gomes at Man Utd

E3 2021 will be online only reveals leaked documents