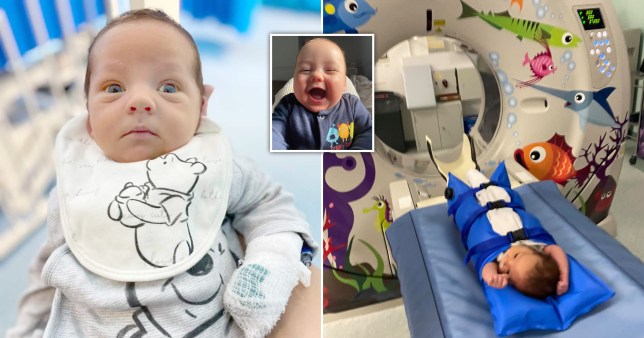 Mum urges parents to get babies for hidden lumps after her son was born with rare cancer Credit: Jam Press

A mum from Bristol has revealed the heart-shattering moment her new-born baby was diagnosed with an extremely rare form of cancer.

Not even 24 hours after giving birth, Billie-Jo Jobling, 25, was told by nurses they had found a lump on her baby boy, Isaac, born in October 2021.

At just seven-days-old, the tot had to undergo surgery to remove the lump and a biopsy had to be performed.

However, after the results came in, Billie-Jo’s worst fears came true, and she was told her new-born son had juvenile granulose germ cell tumour of the testes – an extremely rare form of cancer.

Billie-Jo, who is a healthcare assistant herself, said: ‘My heart broke, I thought I was going to lose my precious new born baby.’ 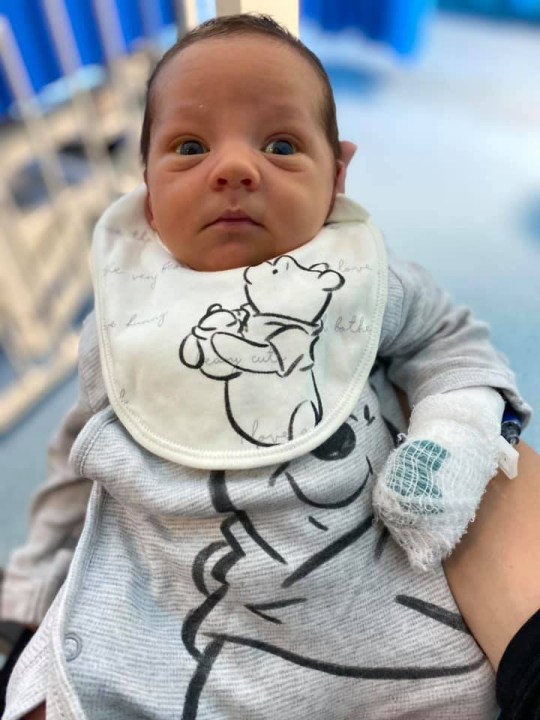 ‘You hear about children having cancer but you never think it’s ever going to happen to your child, especially a baby.

‘The weeks that followed it was all a blur. I wasn’t living, I was surviving day by day.

‘I was petrified of my other children meeting Isaac in case I was going to lose him.

‘I was so upset and cried almost everyday. This has definitely been the hardest thing I have ever had to go through.

‘Your world just comes crashing down and life will never be the same again.’

Billie-Jo is urging other parents to check their children for lumps after nurses originally found the lump on Isaac’s testicle as they carried out his newborn screening test.

Isaac was rushed to Bristol Children’s hospital for further examination, with doctors initially thinking he was suffering with a twisted testicle.

However an ultrasound on his pelvis and abdomen revealed his right testicle was filled with a half-solid/cystic tumour. 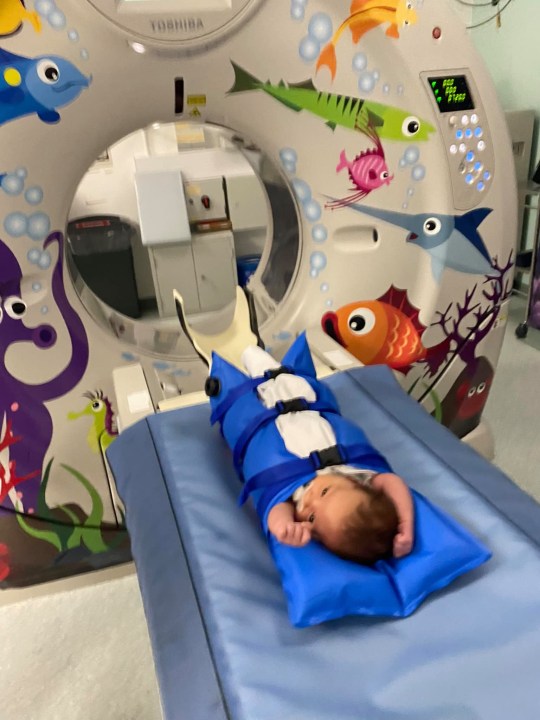 She said: ‘I asked if this could be cancer and he said it might be – although it would be extremely rare, there was a chance this tumour could be cancerous.

‘None of the doctors had seen anything like it before.’

Isaac underwent surgery to remove his right testicle, and a biopsy confirmed it was cancerous.

Billie-Jo said: ‘My biggest fear was that Isaac wouldn’t survive.

‘I was scared he was in pain and I couldn’t do anything about it.

‘I couldn’t bare talking about his future. I couldn’t imagine a life without him.

‘As a parent it is your responsibility to protect your child, but I had no control over cancer, I knew I couldn’t protect him from that.’ 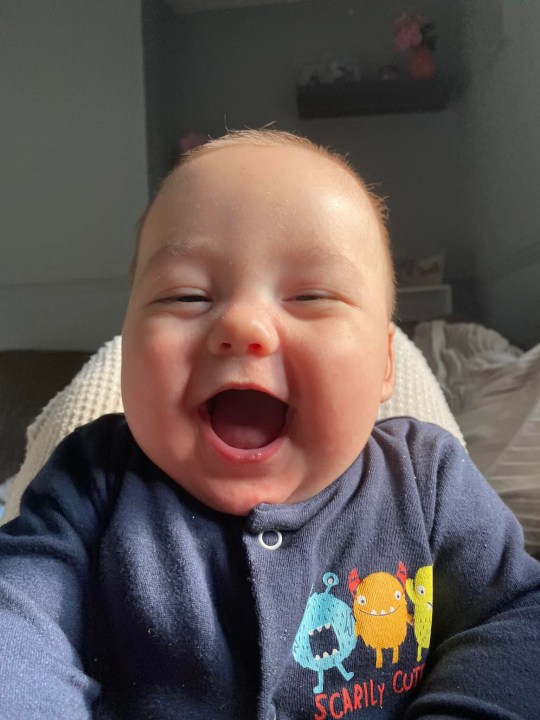 After his diagnosis, at just four-weeks-old Isaac had to undergo a chest X-ray, bone scan, CT scan, ultrasound, MRI and a tumour marker blood test to stage his cancer.

Having to see her baby son undergo so many tests left Billie-Jo feeling extremely ‘lost’, but she put on a brave face for her other children.

She said: ‘Our other children Esmee, seven, and Reuben, five, helped us. We didn’t want to let them know in the early stages so they were a big distraction, I had to keep going for them.

‘Whilst we waited for his biopsy results we tried to spend as much family time together as possible. We didn’t want them to catch on to what was going on.’

Luckily, as Isaac’s cancer was caught early, after his surgery to remove the lump he is now in remission. 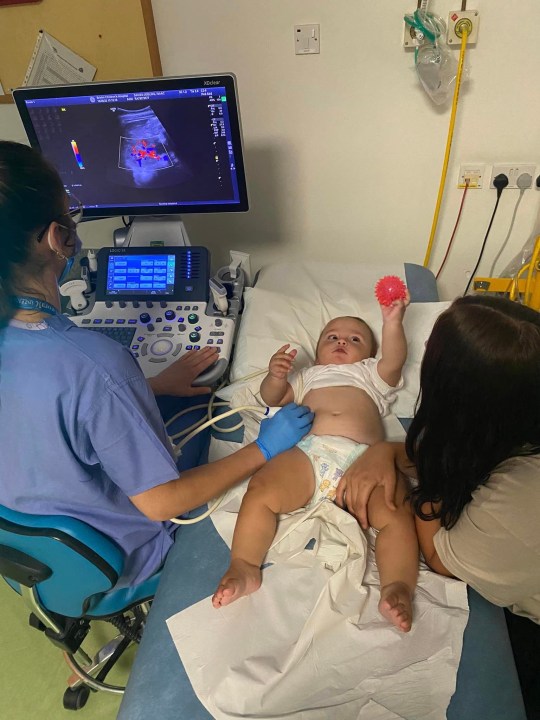 For the next five years, the brave boy will need to have scans every three months, along with serval blood tests to keep an eye on his condition.

Billie-Jo said: ‘I’m always worried his cancer will return and scans are an extremely difficult time.

‘We take it day by day and always try our hardest to remains positive.

‘Although there is a low chance that his cancer will return, this doesn’t provide much reassurance as the chance of him developing cancer whilst he was developing inside of me was [also] extremely low and it happened – so I don’t really listen to statistics nowadays.

‘I just know that if the worst was to ever happen again, I know that Isaac will forever be in safe hands whilst he is under Bristol Children’s hospital.’

Isaac is now approaching his first birthday, and Billie-Jo says he is ‘thriving’. 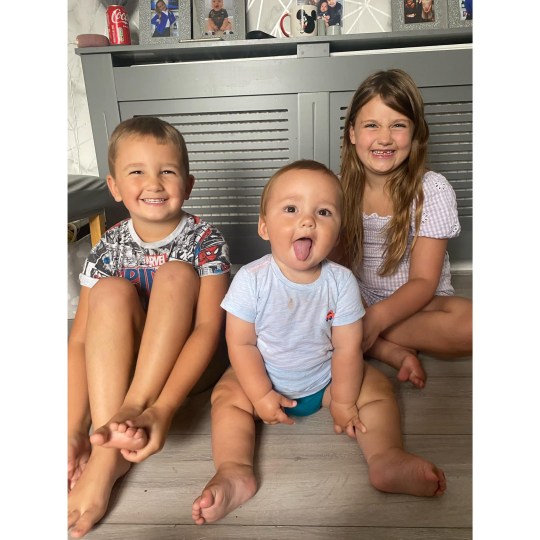 She said: ‘He is so happy and strong and takes everything in his stride. He loves dancing and is always laughing and smiling.

‘I want to share Isaac’s story because cancer doesn’t discriminate – it can happen to anyone.

‘Before having Isaac, I never spoke to my children about feeling for lumps in our body because cancer never entered my head.

‘My children regularly check themselves now and know the importance of why we need to check for lumps.’