A RECORD 343,000 jabs in a day have boosted hopes of beating Covid.

But there were prayers for 1,820 more people announced to have died yesterday — also a new high.

Three cathedrals — Salisbury in Wiltshire, Blackburn in Lancashire and Lichfield, Staffs — were among sites helping to deliver Tuesday’s vaccine record, up nearly 20,000 on the previous best.

With 4.6million now vaccinated, Boris Johnson says Britain remains on course to protect the 15million most vulnerable within weeks.

Speaking at No10 yesterday, the PM said: “The light will only really begin to dawn as we get those vaccinations up.”

He also warned of more fatalities in the “tough weeks ahead”.

Mr Johnson added: “These figures are appalling and, of course, we think of the suffering that each one of those deaths represent to their friends. 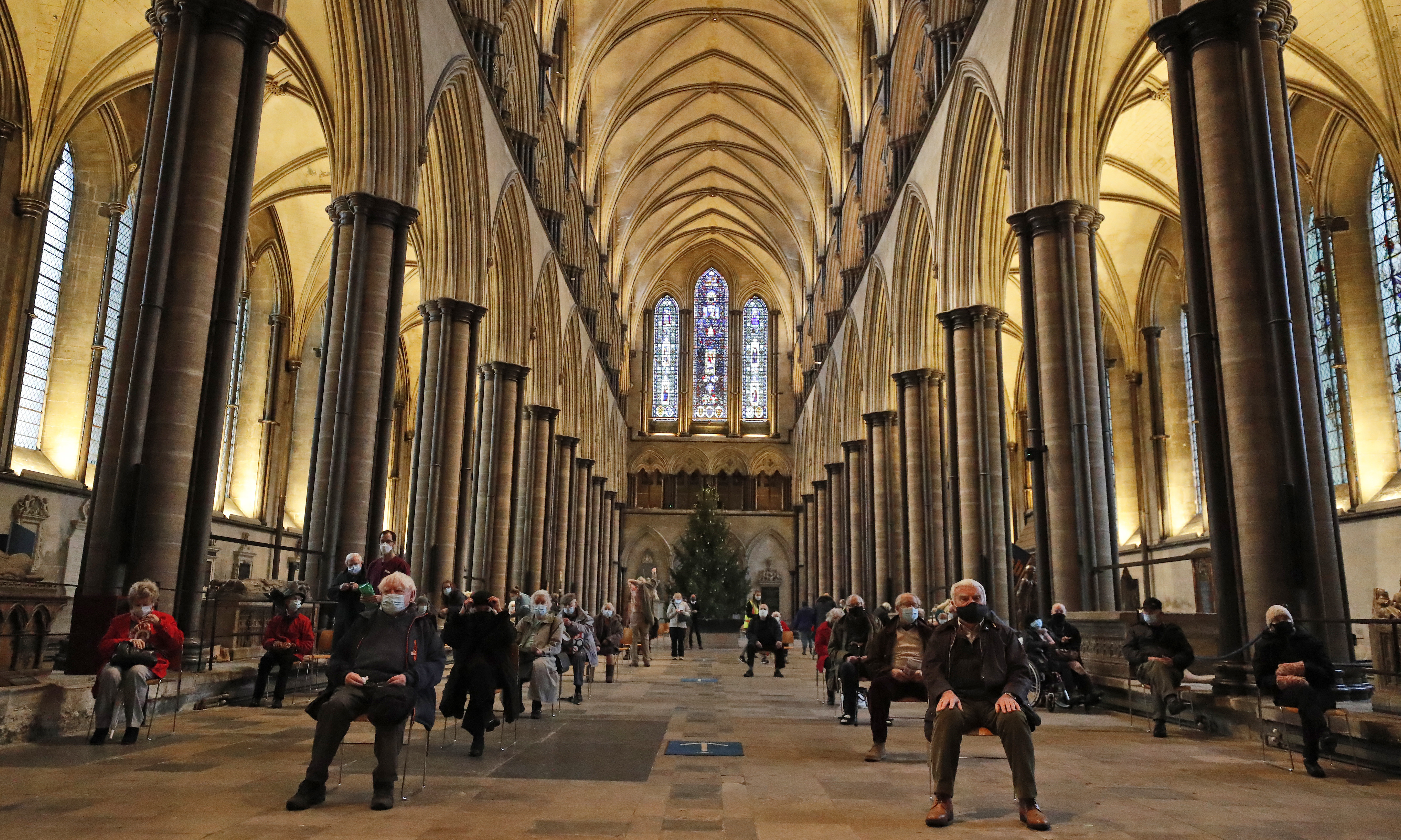 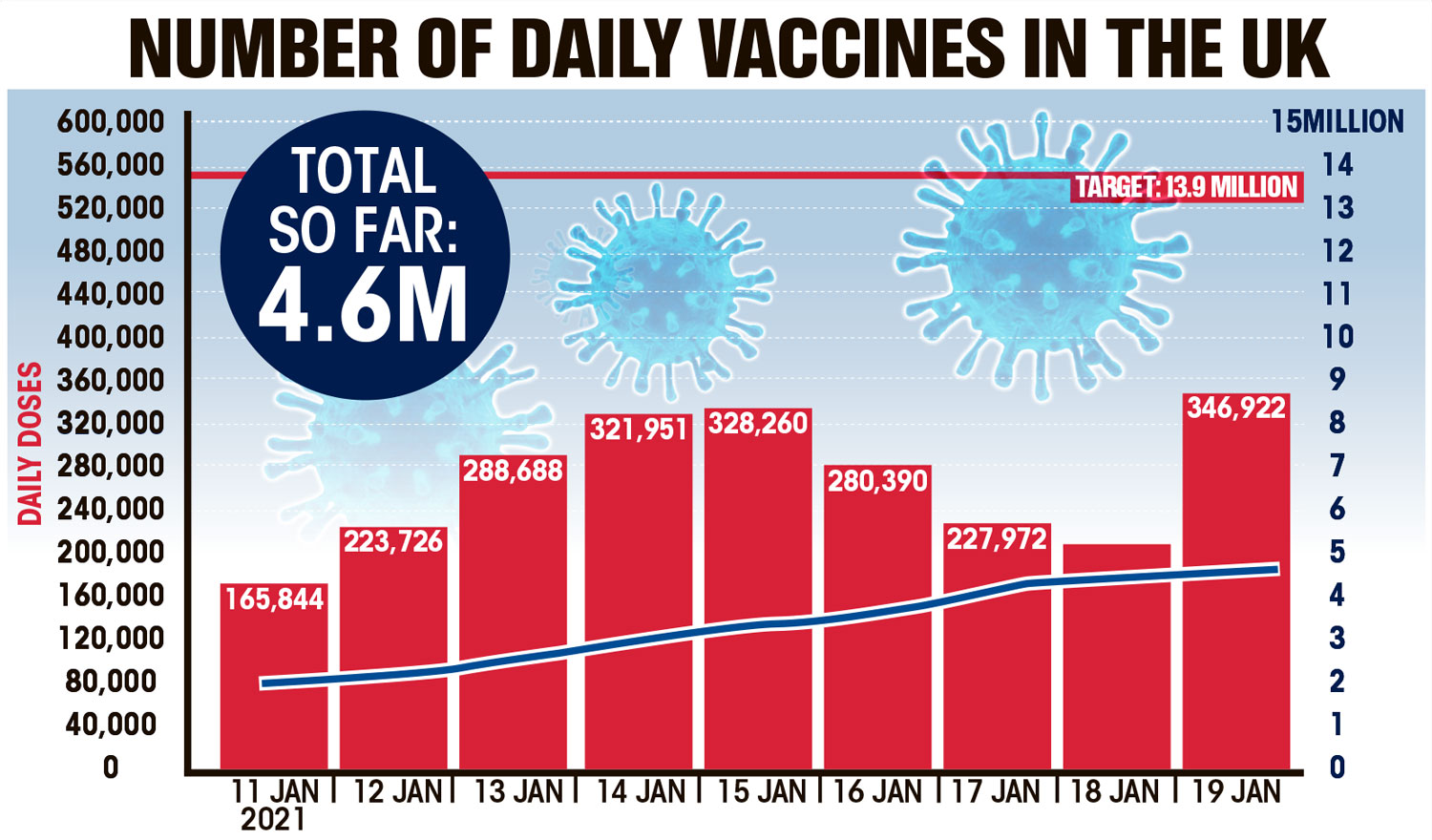 “It spread very quickly, not just in London and South East where it began but now in virtually in all parts of the country.”

Giving a glimmer of hope, he said: “It looks as though the rates of infection in the country overall may now be peaking or flattening, but they’re not flattening very fast.

He added: “We must hope that by getting daily infections down — in the way that perhaps has been happening since the lockdown — that will feed through into a reduction in deaths as well.”

Mr Johnson again pleaded with people to obey the stay-at-home order, adding: “It’s clear that we must keep a grip on this.

“We must maintain discipline, keep observing the lockdown, protect the NHS, save lives while the vaccines go in.”

The vaccination blitz should make a noticeable difference by the spring, the PM said.

He added: “We’re going as fast as we can. It’s literally a race against time to protect the elderly and vulnerable in what is still a very tough pandemic.” 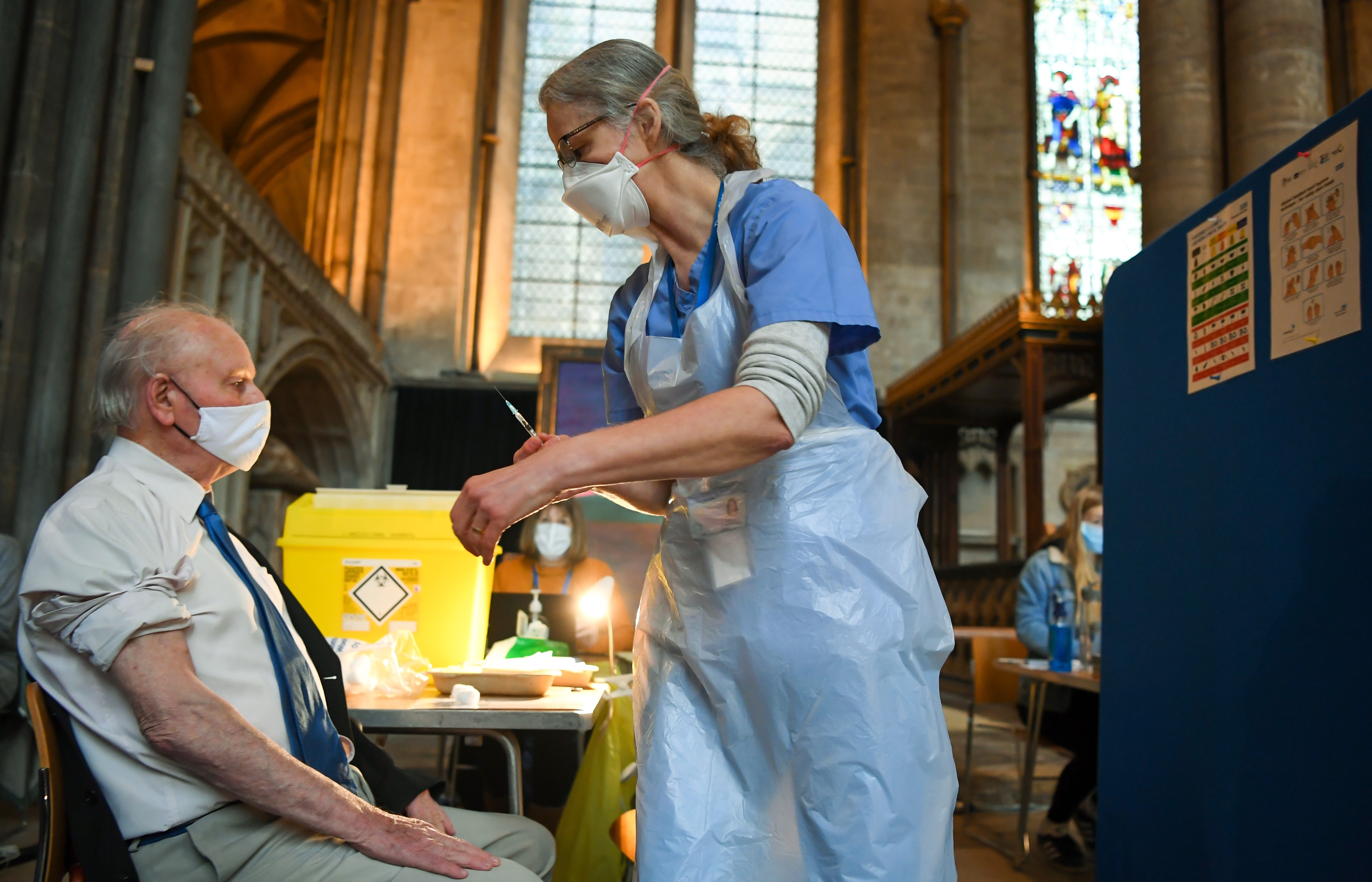 Staff give the Pfizer Covid vaccine to a patient at the vaccination centre set up inside Salisbury Cathedral Credit: Getty Images – Getty

Cinemas, mosques and cricket clubs are the latest to be turned into vaccination centres. By next week, 67 chemists will also be offering the vaccine.

Jabs are already available from over 1,000 GP-led services, more than 200 hospitals and 17 mass immunisation centres.

“Each week the NHS is making it easier for people to get a jab closer to home, in a place sat at the heart of their community, from the pharmacy to the mosque.”

But the grim Covid figures led Britain’s top scientist to warn the crisis has left parts of the NHS resembling a “war zone”.

He said the pressure on the NHS is “very, very bad at the moment, and in some cases it looks like a war zone in terms of the things that people are having to deal with”.

He warned the jab will not do the short-term “heavy lifting” — with social distancing and hand washing key to stopping the spread.

But there was now “light at the end of the tunnel”, with a slow release into summer as more jabs eased pressure on hospitals.

Families may still have to wait months to visit care homes, said Sir Patrick, as inside meets were unsafe even after residents have had their two jabs.

He suggested sceptics’ opposition to lockdown was “insanity”. He also admitted the Government had erred by not acting sooner to shut down the country when the pandemic first emerged.

His comments came as a new survey found cases had not dropped since the start of January and may even have started to rise.

The React study by Imperial College London carried out swab tests on 142,900 volunteers between January 6 and 15.

It found around one in 63 people in England now have the virus. London was worst-hit with one in 36 residents infected.

Worryingly, cases did not drop over the ten-day survey — unlike at the start of previous lockdowns.

Scientists think the more contagious mutation may be to blame.

“If prevalence continues at the high rate we are seeing then hospitals will stay under immense pressure, and more and more lives will be lost.”

Health Secretary Matt Hancock said sticking to the lockdown rules will help reduce the spread. He added: “These findings show why we must not let down our guard over the weeks to come. 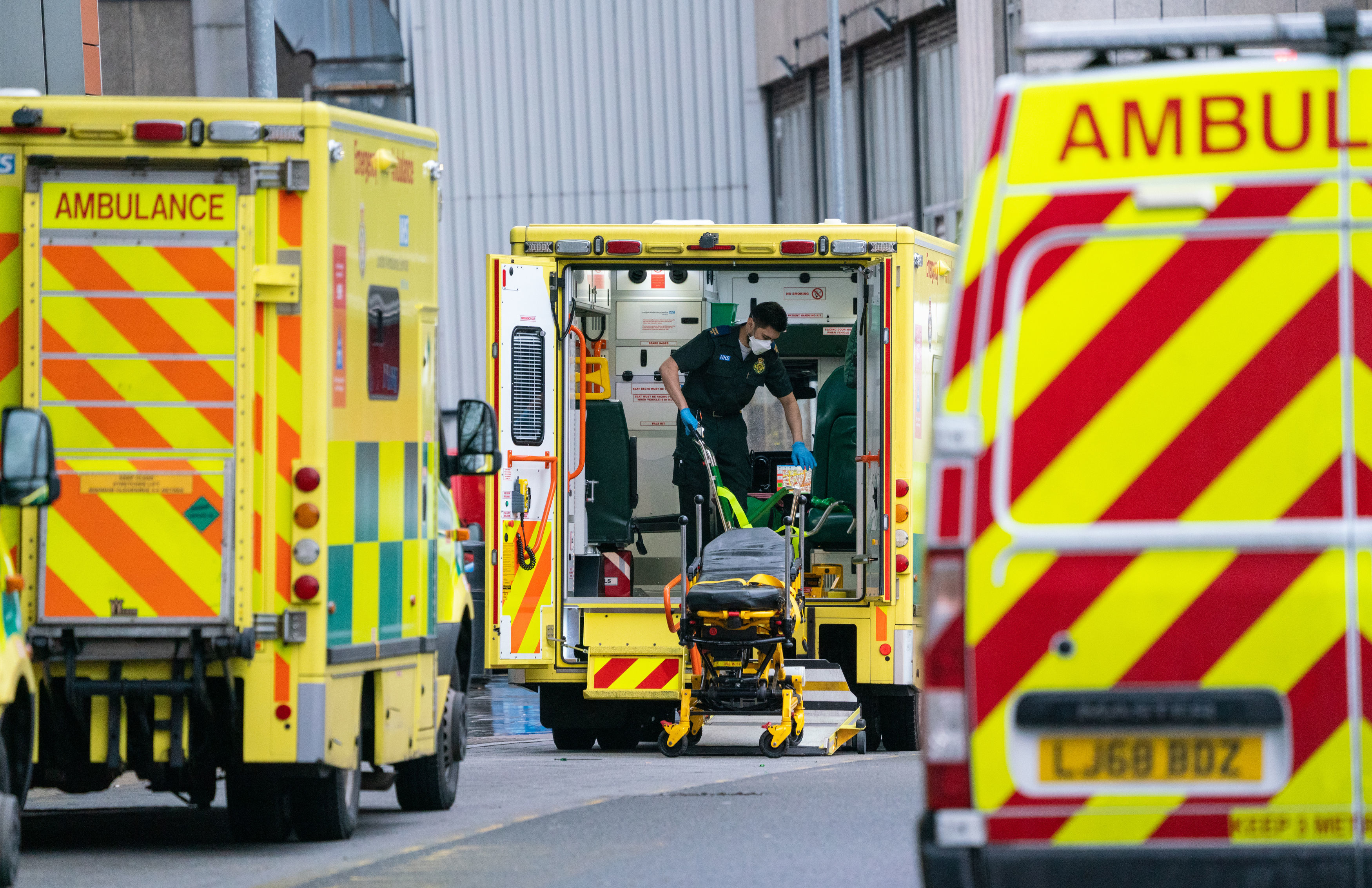 Over 93.000 Brits have now lost their lives to the virusCredit: PA:Press Association

“Infections across England are at very high levels and this will keep having a knock-on effect on the already significant pressures faced by our NHS and hospitals.

“It is absolutely paramount that everyone plays their part.

“This means staying at home and only going out where absolutely necessary, reducing contact with others and maintaining social distancing.”

THE huge number of jabs done yesterday should calm nerves among those twitchy about the slowing of the rollout this week.

But the Government must keep that pace going.

Because while it is heartening too to see positive cases fall by almost a fifth in a week, that’s where the good news ends.

Those infections are still colossal. Daily deaths, three weeks on from the catastrophic case peaks around the New Year, have hit an appalling new high.

They are near-certain to get worse.

The jabs programme simply must not stall.