PUBS and shops are primed for a £4billion Wonder Weekend — with jabbed-up England on course to be unlocked entirely by June.

The first Bank Holiday weekend that most boozers have been open since last August could see 20 million pints being drunk to celebrate success with the vaccine rollout. 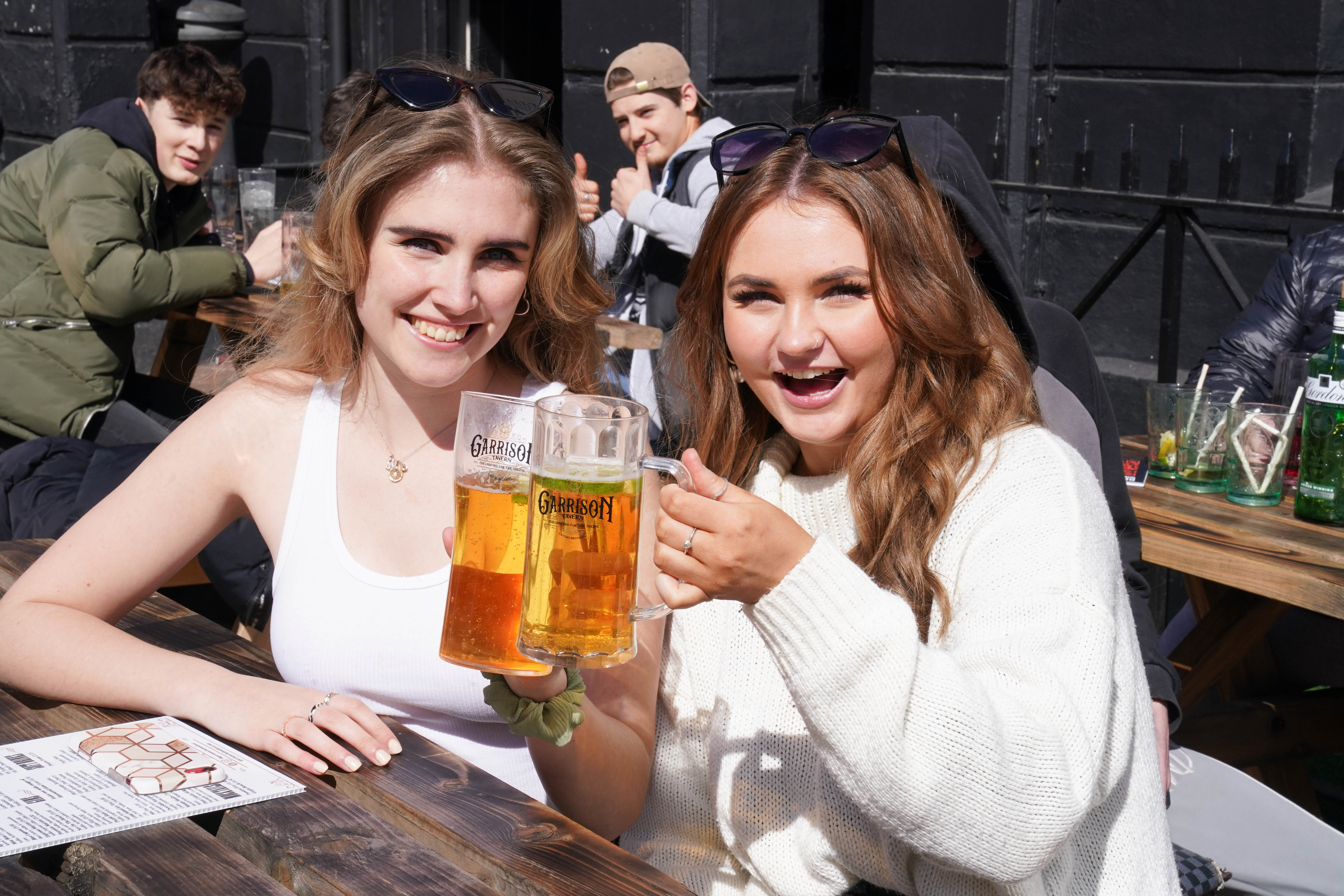 This is the first Bank Holiday weekend that most boozers will have been open since last AugustCredit: Paul Edwards / The Sun

Jabs Minister Nadhim Zahawi said indoor mixing will be on next month while Covid proof arrangements will be ready for travelling Brits.

And the last two phases of lockdown should be lifting on time with him insisting: “The good news is May 17 looks good, June 21 looks good, too.”

Mr Zahawi’s optimism comes as virus rates dropped below 50 cases per 100,000 people in more than 95 per cent of UK areas.

Six people will be able to meet indoors in May with the last sectors of the economy, such as nightclubs, able to reopen five weeks later.

The Rule of Six is also due to be lifted outdoors, allowing groups of up to 30 to mix in summer sunshine.

Mr Zahawi confirmed people will not need to present Covid papers, proving they have been jabbed or tested, when pubs and restaurants fully reopen. 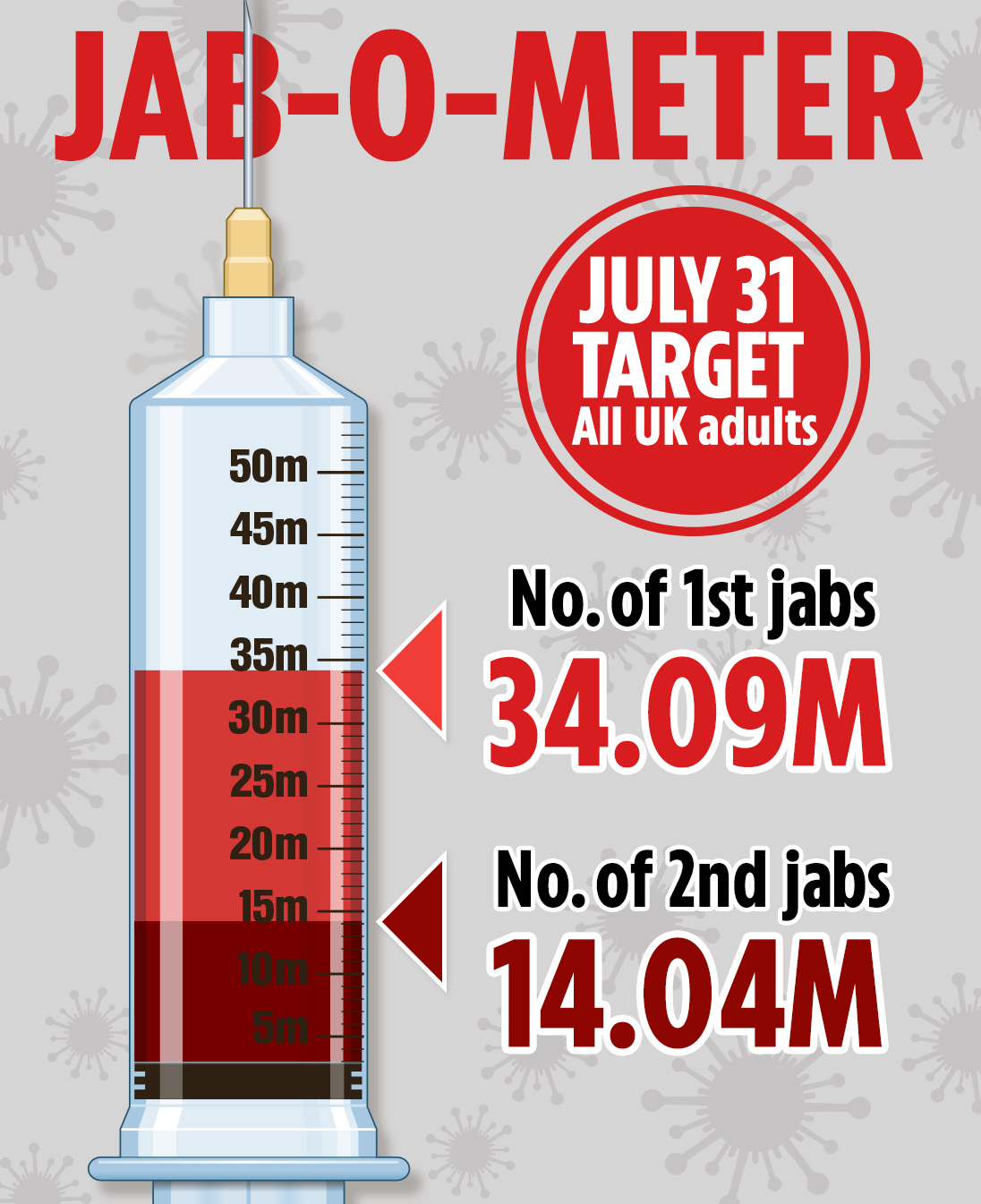 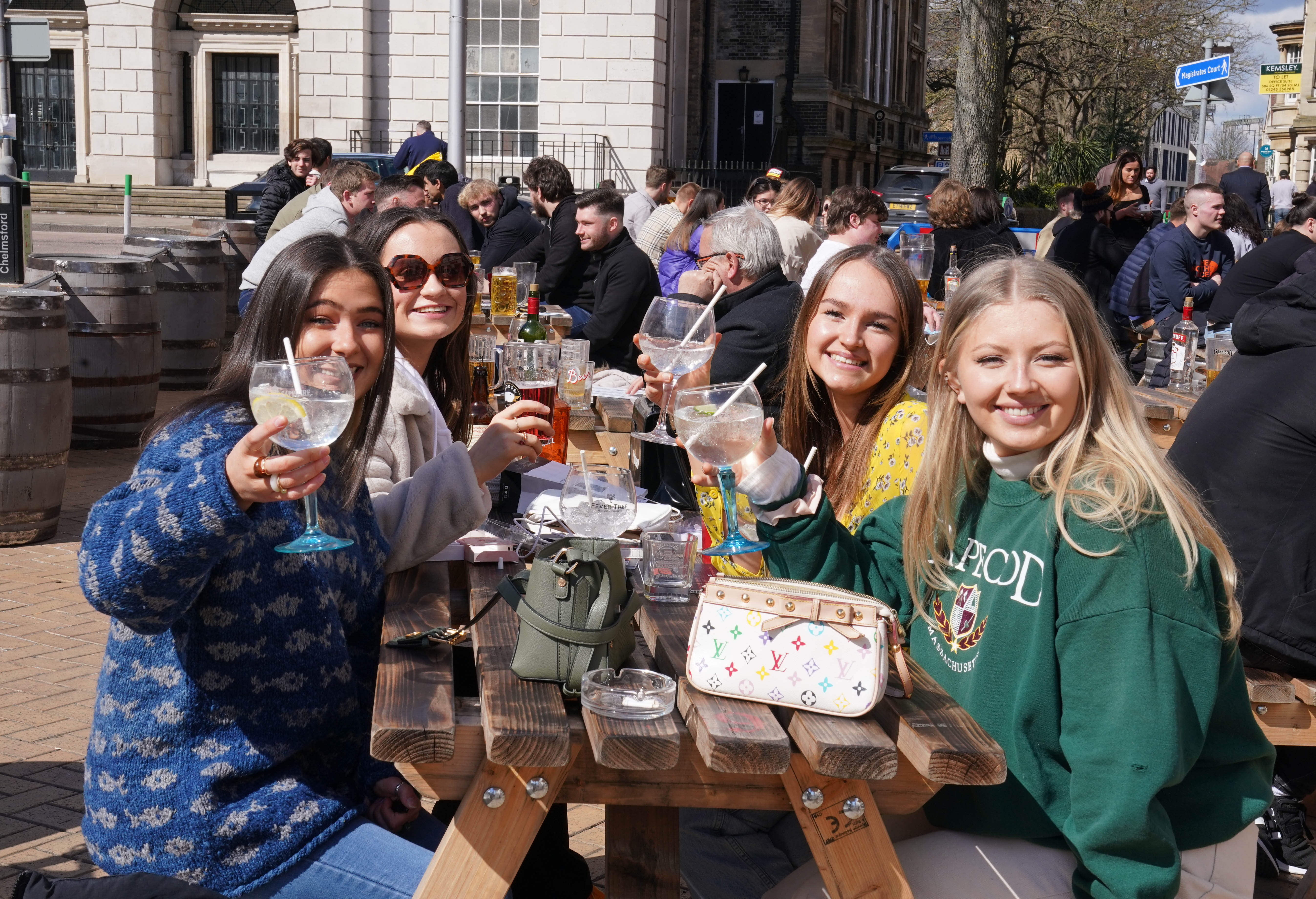 This weekend could see 20 million pints being drunkCredit: Paul Edwards / The Sun 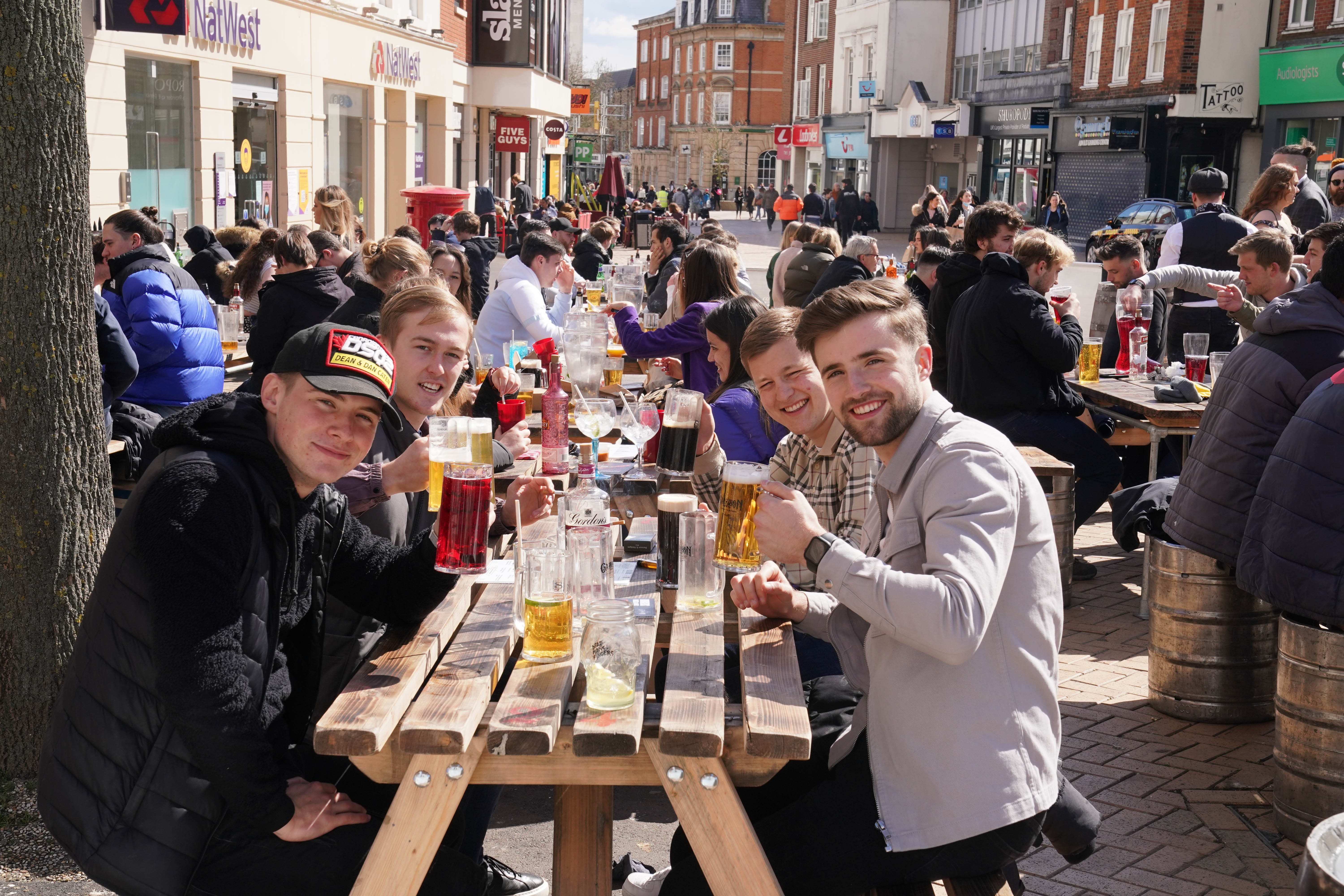 Punters have been flocking to socialise in outdoor spacesCredit: Paul Edwards / The Sun

He said: “Vaccinations are working — about 70 per cent of the adult population of England have antibodies, almost two-thirds have had a single dose, a quarter have had two doses.”

And he added: “For travel overseas, clearly a number of countries are indicating they will need Covid certification.

“It is right to make the certification available for our citizens and to shape the protocols around the world.

“Because clearly a number of countries are going to do this, we would rather do it in a co-ordinated way.”

And despite fears the NHS App for travelling abroad will not be ready, Mr Zahawi insisted it would be available from May 17.

That will sweeten even more the drink for five million Brits this weekend, who will start the marathon booze-up tonight.

But bars told punters to BYOB — that is ‘bring your own blankets’, not beer — with chilly 57F (14C) days and 46F evenings forecast for beer gardens. 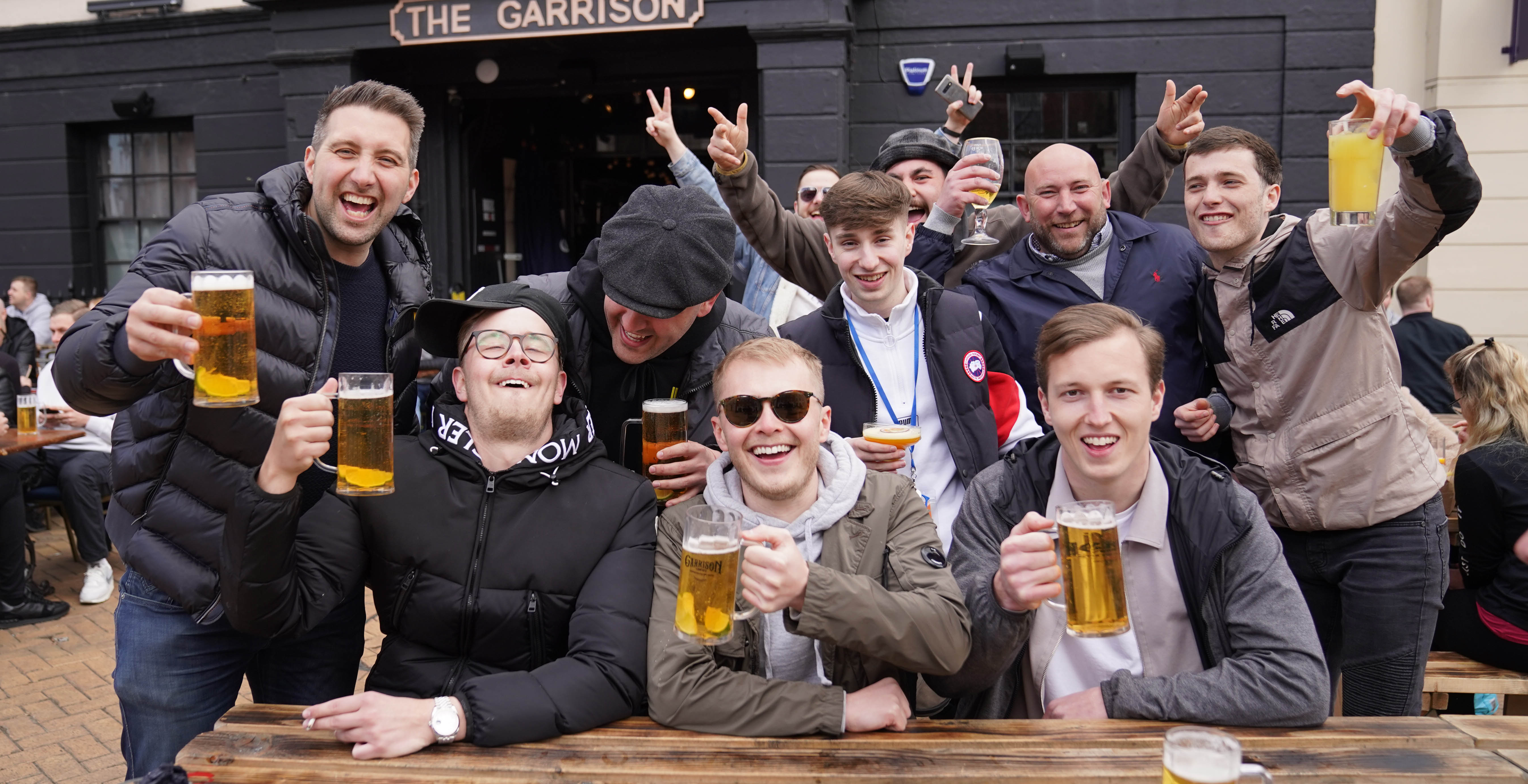 High streets shops have seen a rush for coats as drinkers wrap up warm for chilly pub sessionsCredit: Paul Edwards / The Sun

Police and Covid marshals will step up patrols in the wake of wild scenes outside some bars following the April 12 re-openings.

Some 50,000 pubs and restaurants are serving booze — though that is under half of hospitality venues.

A British Beer & Pub Association spokesperson said: “Pubgoers will be looking forward to their first Bank Holiday weekend back, particularly after not being able to go there at Easter — and many were closed at Christmas.”

Even rain should not bother most as many pubs have tents or roofs on terraces.

Around £350million will be spent in pubs and restaurants over the weekend, with more than £3.5billion in shops, shows a VoucherCodes.co.uk study.

Meanwhile, all over-40s are now eligible for their Covid jab after health bosses expanded the scheme to a million more adults.

But those in their 30s have been told they will have to wait until May 10 for their initial shot due to a vaccine supply bottleneck.

Officials have yet to decide on whether the Oxford/AstraZeneca vaccine should be limited to over-40s.

Current advice is for under-30s to get alternative jabs if available due to a risk of rare blood clots.

But the Joint Committee on Vaccination and Immunisation is now considering raising the age limit.

NHS England will start texting adults aged 40 and 41 inviting them for their first jab from today.

NHS boss Sir Simon Stevens said nine in ten of all over-45s have now been vaccinated.

Infection levels in all regions of England have either fallen slightly or remain unchanged, according to Public Health England.