Productivity hacks that actually work for people with ADHD 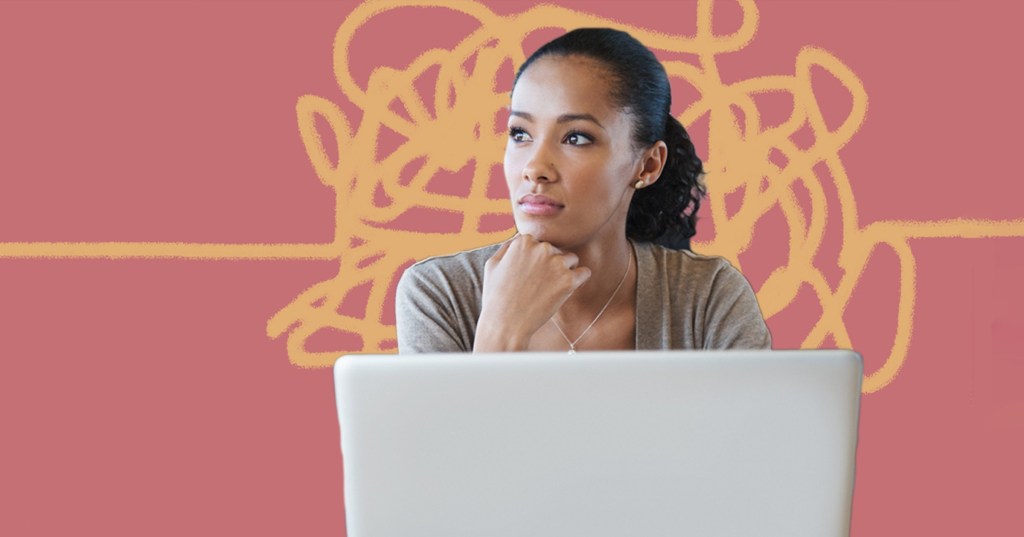 People with ADHD can struggle with focus and concentration, due to a lack of dopamine (Picture: Getty)

The internet is brimming with productivity hacks.

From switching off your phone to the Pomodoro Technique and Ivy Lee Method, or TikTok hacks like the scary hour.

This ever-expanding list of tips and tricks is a testament to how many of us struggle to Get Sh*t Done sometimes, side-eyeing that ever-growing to-do list, or staring blankly at our laptop screen.

Finding something that works (and sticking to it) is tricky, but when you have ADHD, it can really feel like these hacks are written in an alien language.

That’s because a neurodivergent brain is wired differently from a neurotypical one. Living with ADHD has been are found to affect quality of life, work productivity and regular daily activities.

The scientific reason people with ADHD struggle to focus

A common symptom of ADHD is inattentiveness; a struggle with focusing. This isn’t because people with ADHD are lazy, or aren’t trying hard enough to concentrate.

Research has shown that the brains of people with ADHD are lacking in dopamine and norepinephrine – the neurotransmitters that control our attention levels and help motivate us.

Without the reward feedback loop that dopamine gives us, people with ADHD can feel mind-numbingly bored.

The result? Less motivation to continue, and a desperation to do something that will bring a dopamine spike; like scrolling through funny videos, falling down a Wiki rabbit hole or grabbing another snack.

The effects of a racing brain

People with ADHD can feel like their mind is always racing with 100 thoughts at once. Dealing with this while trying to work a standard 9-5 job or hit freelance deadlines is hard work.

‘While most people around me are trying to do work by putting ‘one foot in front of the other’, my brain tries to run along every path of that fractal simultaneously,’ says Dr. Shubhangi, a junior doctor and a Trainee Editor of the British Journal of Psychiatry, who lives with ADHD.

They continue: ‘This can lead to interesting and creative approaches to doing even the most basic of tasks. However, it means I never really understand how much time commitments take and often don’t realise where time has gone when I do things.’

Here, Dr. Karmakar is explaining ‘time-blindness’. The effect of this, they explain, is people with ADHD often don’t look at how much time a task will take, but by how much effort it takes to complete in return for dopamine.

‘From the outside, this means people may think I’m not working hard enough, when I’m just trying to find a small glimpse in time when my brain decides the neurochemical ‘reward’ is big enough, even for a task I genuinely care about a lot,’ they added.

Knowing that people may think you’re slacking off while you’re trying to understand why you can’t function ‘like everyone else’ can make you feel terrible about yourself.

‘Procrastination, overwhelm and anxiety are common in people with ADHD,’ says Clinical Psychologist Dr Gemma Harris, explaining how difficulty managing ADHD symptoms can lead to feelings of low self-worth, a fear of failure and increased anxiety, making it harder still to be productive.

The impact of living with this is massive: depression is three times more prevalent in adults with ADHD compared to adults without ADHD.

But fear not, people with ADHD aren’t doomed to a life of incomplete tasks.

Throw out those classic productivity hacks

‘People with ADHD can be incredibly productive; often because hyperfocus allows them to persist with a project longer than others, and because their creativity allows for novel ways of working,’ Dr Harris explains.

However,  there are times when hyperfocus can result in poor prioritizing of tasks and getting lost in the detail, Dr Harris adds.

Considering this, it’s easy to understand why productivity tips geared towards a neurotypical brain might not work for a neurodivergent brain.

‘Classic productivity hacks struggle to find a place in the ADHD mind, often because they try to box our attention spans, and ability to work, into a linear “order” or into “blocks” of time or tasks,’ Dr Karmakar says.

They explain how this can play out in daily life. Firstly: small, easy tasks – like making your bed in the morning – can be low-reward in the neurochemical sense. People will ADHD will ignore these in favour of bigger challenges, or become overwhelmed by the need to do all these tasks in order.

Equally, people with ADHD struggle with attention regulation, the ability to shift attention between tasks at the appropriate time or reason, and with ‘object permanence’. For people with ADHD, it really is ‘out of sight out of mind’, so losing things is a regular problem.

So, ADHD leaves you craving more dopamine. How do you harness this for productivity?

How to hack your brain to be productive with ADHD

Learning to work with your neurodivergent brain, and realising it isn’t a weakness or illness, is the key to healthy productivity.

‘Accepting your different needs and not doubling down on yourself as ‘lazy or useless’, does two very important things for us,’ Dr Karmakar says. ‘It helps us cognitively derive a little more ‘reward’, from smaller ‘wins’, and in doing so allows us to regulate our emotions as well as our schedules better.’

Advocating for your accommodations helps challenge the stigma surrounding ADHD, and empower you to make decisions based on what will work for you.


Do you get distracted easily? (Picture: Getty/Westend61)

Right, so you’re working on the deeper stuff, what practical tips can you put into action in the meantime?

Ellie Midds was diagnosed with ADHD in October 2021. Through Access to Work, Ellie received funding and was assigned a work coach.

Over time, she developed some techniques that revolutionised her productivity. She shared what she learned in a webinar for Dyslexia Box.

Speak to your boss about flexible working

‘People with ADHD need to work in short chunks, and sitting at your laptop for longer doesn’t mean you will get more done,’ Ellie explains.

If you’re a morning person, start earlier. If you find it easier to focus later in the day, ask to finish later. Structuring your schedule in a way that suits you can help you feel more productive, as you’re ‘playing to your strengths,’ as Dr Harris words it.

Be honest when you’re struggling to focus

No one wants to tell their boss they are struggling to get their work done – on the surface, it isn’t a good look. But, Ellie says, it’s better to admit you are finding it difficult to finish an admin task than to say nothing and hand it in late.

Communicate that you will get it done, it will just be done out of hours, for example.

‘Don’t be afraid to ask for what you need and let people know what’s going on,’ she adds.

Another symptom of ADHD is problems with auditory processing, meaning that even when you’re trying to listen it can feel like nothing is going in.

To mitigate this, Ellie suggests asking for written meeting notes or using a transcription software like Otter so you can fully focus on what someone is saying without fretting about making notes.

Another option is Dragon, a speech to text software. Ellie pays for these using Access to Work funding.

ADHD can wreak havoc on your memory and organisational skills. An ordinary to-do list won’t cut it.

The table has three columns. The first is for short tasks that can be completed in less than five minutes, like sending an email or cancelling a subscription. The second column is for longer tasks that take up to half an hour. The third is for bigger projects that are ticking along in the back of your mind.

You might be able to break the project down into smaller tasks, and put them into the second column, but having it written down can help your brain feel less crowded.

To suit a mind that is thinking of 100 things at once, Ellie listens to videos on 1.5 or 2x speed, helping to keep her attention for longer.

Another way to ‘zone in’ could be to listen to binaural beats; a form of soundwave therapy you can find on Youtube. While music, in general, has been shown to help with focus for ADHD,  people with ADHD may also have different brainwaves and research has shown that listening to music that taps into this can help to soothe and improve concentration.

Setting five or ten-minute timers can also help break down tasks into more manageable chunks, as focusing until the timer goes off will feel like a win, which floods your brain with dopamine

Longer timers are also great for helping with hyperfocus, reminding you to get up and walk around, or get some water – as too much time spent in hyperfocus can cause burnout.

Fill your space with important things

Contrary to the usual advice, you might not want to tidy everything away before starting work.

‘While a ‘calm, uncluttered workspace’ might be the ideal for neurotypical people, when I am working to a deadline or on something I am particularly focused on, my ADHD needs are to have the most cluttered space possible, so I can actually see everything I might even tangentially need right in front of me,’ Dr Karmakar explains.

The goal is to give yourself ways to offload energy and stave off boredom. ‘The more stimulated we are, the more we can focus,’ Ellie says. ‘Well, to a point. Too much stimulation can lead to overwhelm.’

Remember fidget spinners? They are great for doing this, and there are so many variations out there now. You can also try a standing desk, rocking footrest and placing a doodle pad next to your laptop.

Make boring tasks into a game

Writing for Attitude Mag, Letitia Sweitzer suggests that the best way for people with ADHD to focus is to make things interesting – as executive dysfunction vanishes when a task interests them.

Figure out your ‘Elements of Interest’ and find a way to add them to your day. This could be, for example, risk-taking, novelty, multi-sensory stimulation, rhythm, speed, surprise or problem-solving.

If urgency keeps you motivated, why not ask your boss to set tight deadlines for short tasks, to put the pressure on? If you crave social interaction, try finding a (real or virtual) work buddy. Seeing them work can help you mirror the behaviour.

Living with ADHD can be difficult, and learning which productivity hacks that work isn’t going to happen overnight, but not forcing yourself into a neurotypical mould is a great place to start.