BRITAIN’S official coronavirus R rate has fallen below 1 across the country – and could be as low as 0.6 in some areas, new estimates show.

The R – which represents the number of people an infected person will pass Covid onto – is now between 0.8 and 1 for the whole UK, Sage today said. 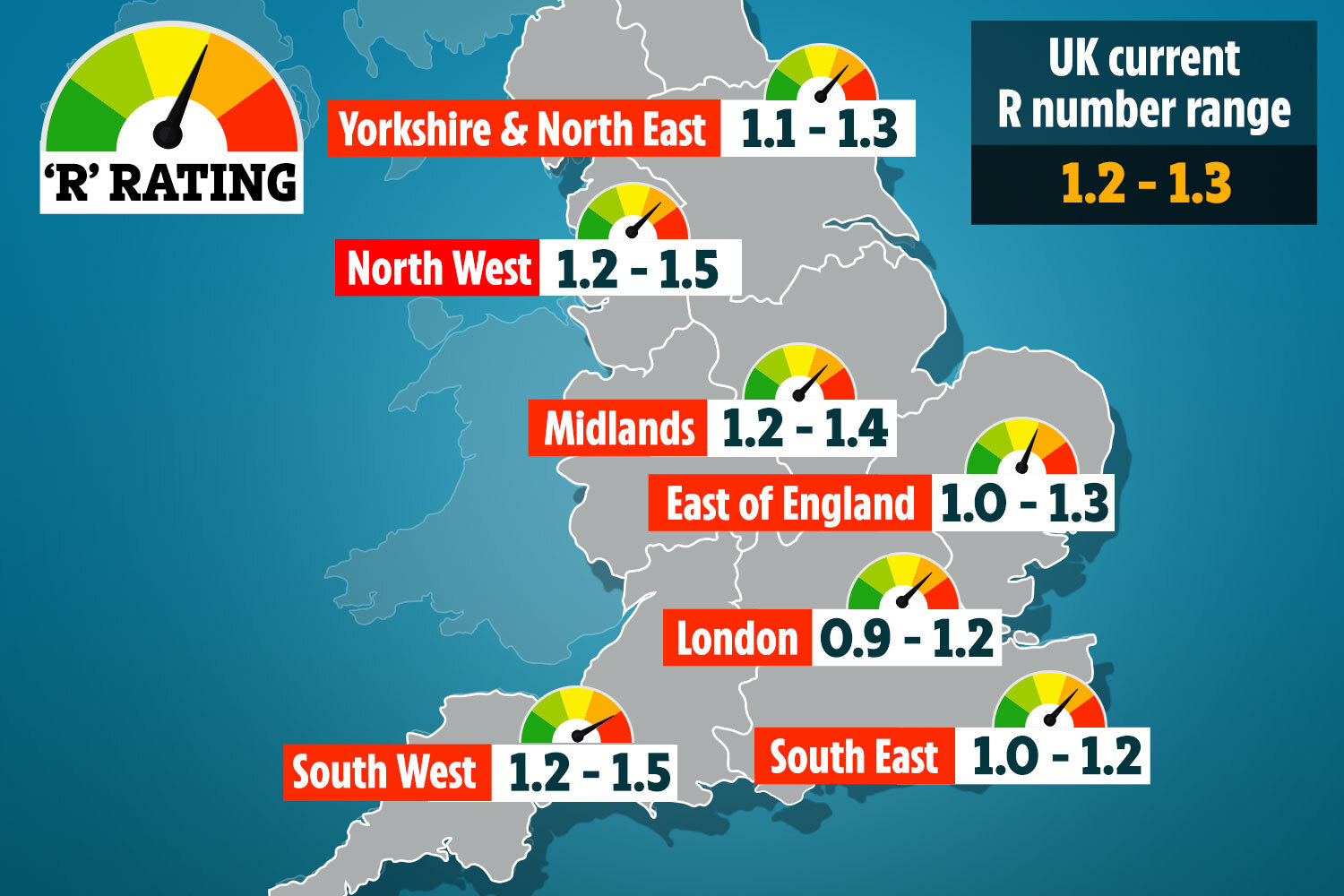 It was estimated to be between 1.2 and 1.3 last week, with London potentially already below 1.

Regionally, in the East of England it may even be as low as 0.6, while London and the South East’s R could be down to 0.7.

When the R is below 1, it means transmission is low and the epidemic is shrinking – but greater than that number suggests it’s growing.

The last time the reproduction value was below 1 in the UK was December 11 and peaked a fortnight ago when the range was between 1 and 1.4.

While the R number is heading in the right direction, experts warn that it remains dangerously close to the crucial 1 value. 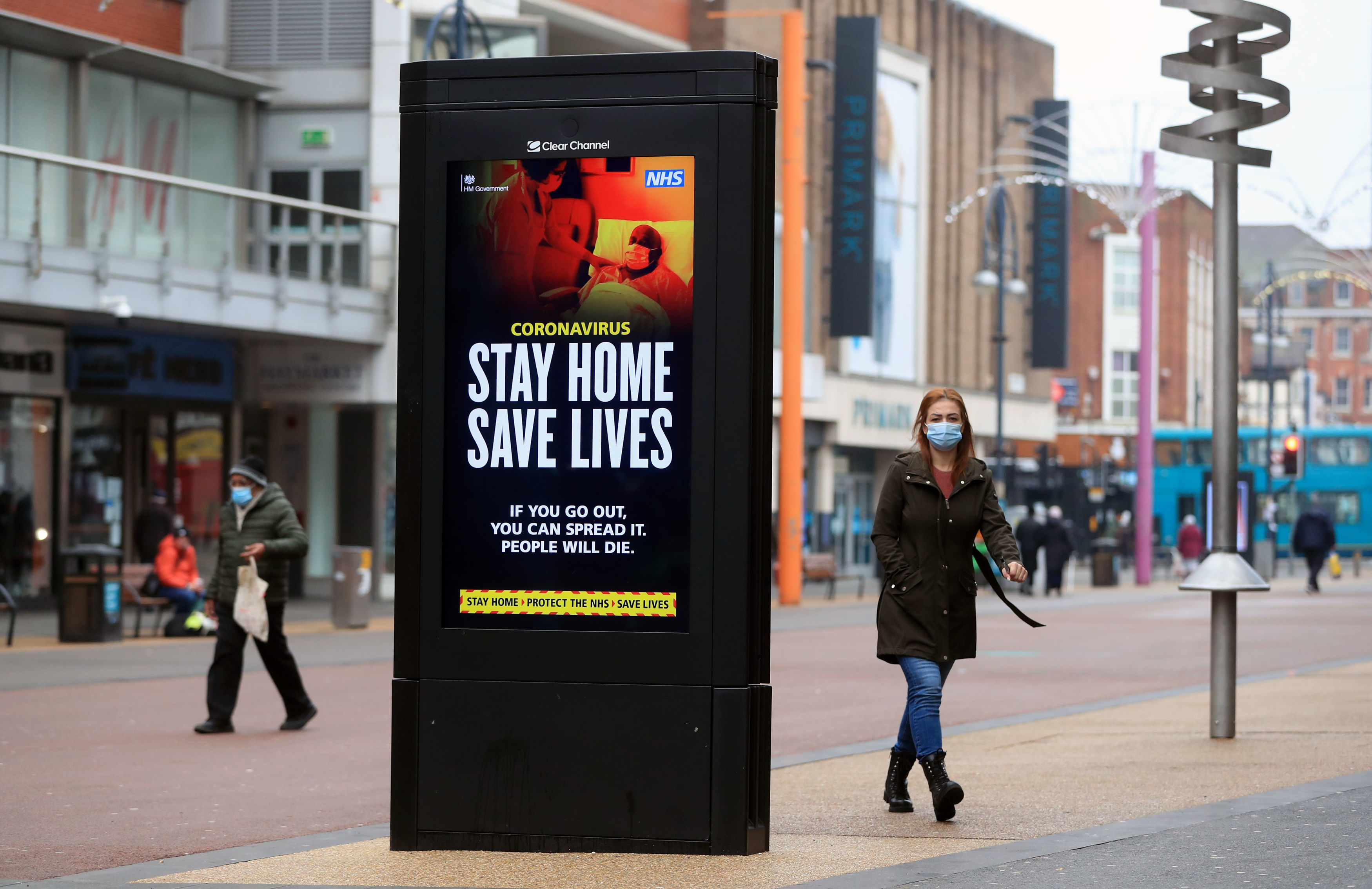 The R rate must be below 1 for the pandemic to be in retreatCredit: PA:Press Association

Sage also warns that as the pandemic is being managed at a local level, UK level estimates are “less meaningful” than previously.

The most recent data, published today, represents transmission over the last few weeks – when Britain has recorded its worst figures since the outbreak of Covid last year.

It comes as the ZOE Covid Symptom Study also found the UK’s R rate was as low as 0.8.

The report, published today, is based on more recent data from test swabs taken up to five days ago.

Experts also found that Covid cases have halved in the last two weeks to 34,133 daily new symptomatic Covid-19 cases in the UK on average.

Meanwhile, new figures published today show a slight drop in the number of people infected with Covid in England after lockdown was introduced.

The Office for National Statistics (ONS) said an estimated one in 55 people in private households in England had Covid-19 between January 10 and 16.

That’s down from one in 50 people for the Christmas period of December 27 to January 2.

The data is from a random sample of people, including those with no symptoms, but does not include care homes or hospitals.

It comes after a separate study found the prevalence of Covid across England increased by 50 per cent and tougher restrictions may be needed.

Imperial College London tested 143,000 volunteers in England between January 6 and 15, with results showing that one in 63 people were infected.

They found around one in 63 people now have the virus across England – up 50 per cent on the last report in December.

London was the worst hit area with one in 36 residents of the capital infected with Covid.

Worryingly, it shows cases did not drop over the ten day survey – unlike the start of the previous two lockdowns.

Scientists think the new, more contagious mutation may be to blame, and warn infections may not fall unless we do more.

It comes as ministers are considering paying £500 to everyone who tests positive for coronavirus to increase the number of people abiding by quarantine rules.

Environment Secretary George Eustice stressed the need for people to comply with the isolation rules when contacted by NHS Test and Trace amid concerns of low compliance.

Scientists welcomed the suggestion of more financial support but Treasury sources were adamant the plan will not go ahead, with one telling the PA news agency bluntly: “Won’t happen.”

The proposal of extending £500 payments to everyone who tests positive for Covid-19 in England, rather than just those who are on low incomes and are unable to work from home, is estimated to cost up to £453 million per week.

It is the “preferred position” of Matt Hancock’s Department of Health and Social Care, according to a leaked document seen by The Guardian.

Mr Eustice told Sky News: “We do need people, if they are asked to self-isolate because they have been contacted through our Test and Trace, we do need them to self-isolate.

“And, obviously, we always review the reasons why they might not.”

On the payment, Mr Eustice added: “No decisions have been made on this.

“We are always keeping multiple policies under review.”

There was hostility to the proposal in some parts of the Government, with one source saying the plan “incentivises people to catch Covid”.

But there was support from experts, with Professor Stephen Reicher, who is advising the Government’s coronavirus response, saying universal payments to self-isolate must form an “essential element of our pandemic response”.

The Scientific Pandemic Insights Group on Behaviours (Spi-B) adviser told BBC News: “You can’t have a bureaucratic system, you can’t have a system where people don’t know whether they will get the support or not, it has to be immediate.

“The way to do that is to make it universal.”

He said a “comprehensive package of care”, including easy access to money, is “the big hole that we have to fill if we want to succeed”.