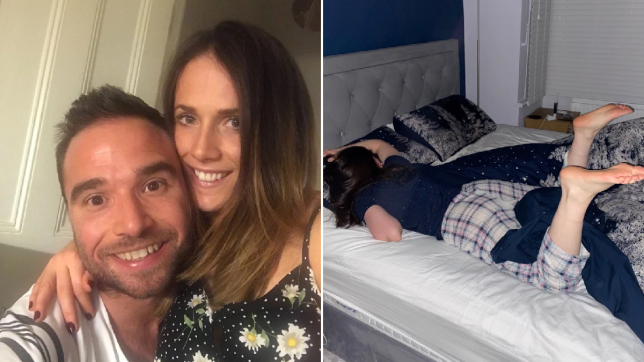 Danielle has restless legs which makes her sleep with her legs up in the air (Picture: PA Real Life)

A woman unconsciously attacks her boyfriend in her sleep – as night terrors cause her to scream, kick and punch him, leaving him with bruises.

Danielle Carter, 37, of Epsom, Surrey has no control over her actions as she sleeps, but luckily her boyfriend John Keast, 33 is very understanding.

A PR director by day, Danielle is a nightmare by night, waking John several times a week with her piercing screams and punching, kicking, flailing limbs.

She can also sleep with her legs sticking up in the air and occasionally sits bolt upright in bed and sings, all while fast asleep.

Danielle, who started dating John in 2018, tried to hide her unconscious antics from him in the early days of their relationship, saying: ‘It actually gave me insomnia. I was so worried about waking him up from screaming that I wouldn’t be able to sleep beside him in bed.

‘He would wake up in the morning and I’d be downstairs on the sofa. I think he thought it was him at first.’ 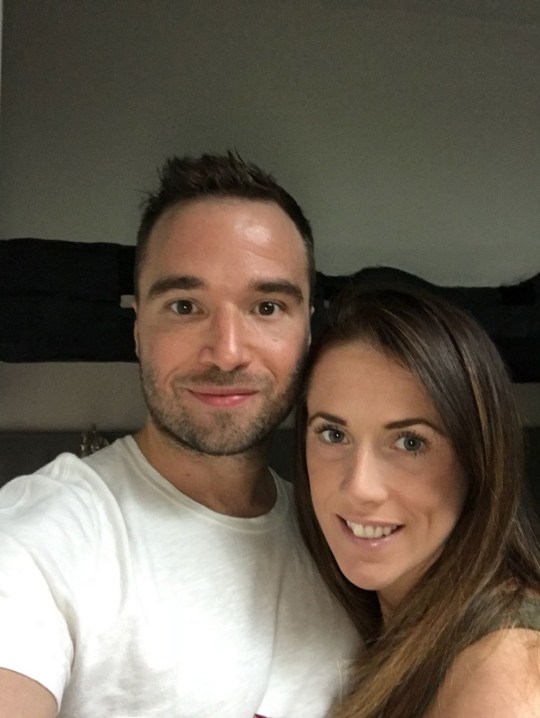 The pair have had to adapt to Danielle’s strange nighttime antics (Picture: PA Real Life)

But now John sleeps with her every night. The couple have even learned to joke about the bizarre situation.

‘John and I have a laugh about it. I often don’t remember what I’ve done in the night, but he enjoys teasing me about it in the morning,’ says Danielle.

‘I do feel bad sometimes when I’ve hurt him and I apologise, but thankfully I’ve not had the police knocking on my door!’

Danielle has had problems with her sleep since she was a child and, as well as her violent night terrors, she suffers from restless leg syndrome – which causes her to sleep with her limbs raised up, although she then repeatedly slams them down onto the bed.

She also suffers from sleep paralysis, where a person cannot move or speak as they wake or fall asleep but their brain is active, and as a result she has terrifying visions – including one of a man trying to shoot her, while she is unable to move.

‘In the past, I never used to tell people about my sleep condition, because I saw it as a bit embarrassing,’ says Danielle.

Danielle’s parents were the first to bear the brunt of her flailing limbs when she was tiny.

‘If I was having a bad night’s sleep, I’d go and sleep in my parents’ bed, and I’d kick, punch and thrash around – to the point that they’d go and sleep downstairs and leave me to it,’ she says. 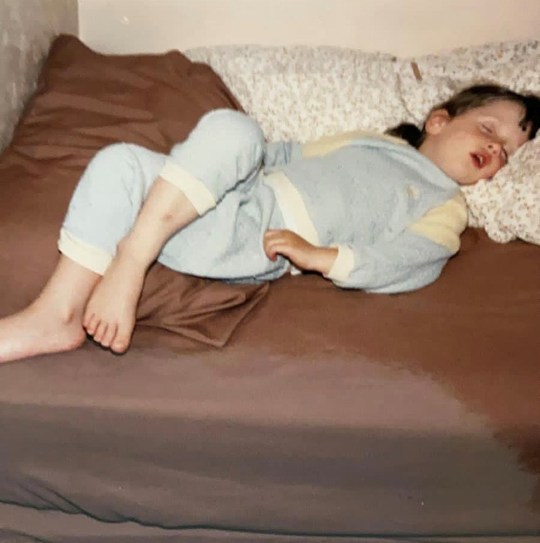 Danielle sleeping as a child, having turned herself around in bed from moving so much (Picture: PA Real Life)

This developed into night terrors, in which Danielle would randomly scream in her sleep for up to 10 seconds at a time, occasionally waking herself up in the process.

‘Often it would start off with me breathing heavily, and then I’d make grunting noises which would then build up into a scream,’ she explains.

‘Sometimes I’d be in such a deep sleep I’d barely remember it, but other times I’d be wide awake and my heart would be pounding.

‘It was really scary at first but now I’m so used to it I fall back asleep quite quickly.’

As she got older and began living in house shares in London, her housemates had to deal with the bizarre reality of Danielle’s sleep habits.

‘I fell asleep on the sofa once, and one of my housemates saw me having sleep paralysis – my eyes were wide open but I couldn’t move,’ she recalls.

‘She was terrified and didn’t know what to do.’

At its worst, in 2015, Danielle would wake up screaming at least five nights a week.

She wanted to get to the root of the problem, so in the summer of 2015 she was referred to a neurologist, who ruled out epilepsy as a cause.

An overnight sleep test at London’s Guy’s Hospital in February 2016 and further tests ruled out narcolepsy, a condition which sees people randomly collapse when they become emotional. 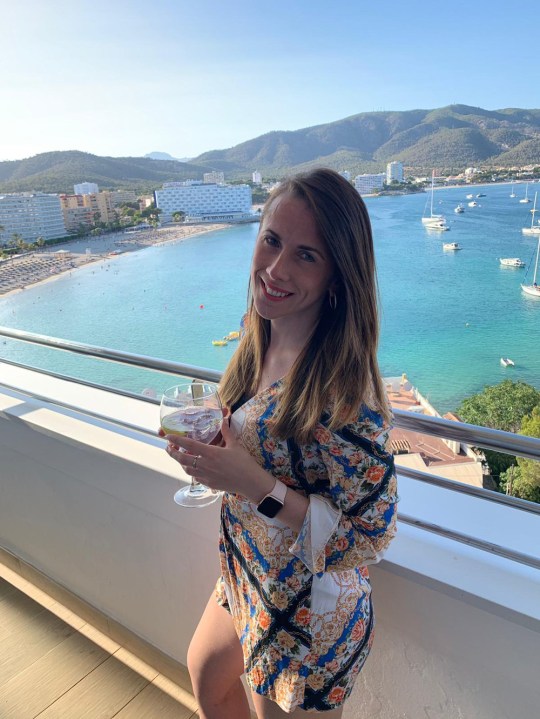 Danielle has accidentally kicked and punched her boyfriend John in her sleep (Picture: PA Real Life)

‘Thankfully there was nothing seriously wrong with me, but the tests showed my brain was in a constant state of arousal so I never go into really deep sleep, which went some way to explain my restless legs too,’ she says.

‘I also have Crohn’s disease, which means I’m low in iron – and that also causes restless legs apparently.’

She was given small doses of melatonin – a hormone which regulates the sleep cycle – by doctors, which has helped improve her condition.

It was around this time that Danielle kept having the same recurring sleep paralysis vision – that a man was sitting on her windowsill with a gun, trying to shoot her.

The first time John experienced Danielle’s night terrors was four months after they got together, on a trip to her home town of Swindon to meet her mother, Denise.

‘I only had a single bed at my mum’s so we were sleeping in separate rooms,’ she says.

‘Suddenly I remember John rushing in looking worried, and I was like “what’s going on?”. He said, “you were screaming” – I think he thought we’d been burgled.

‘We spoke to mum about it the next day and she jokingly said to John, “she’s always been a nightmare – but now she’s your problem”.’ 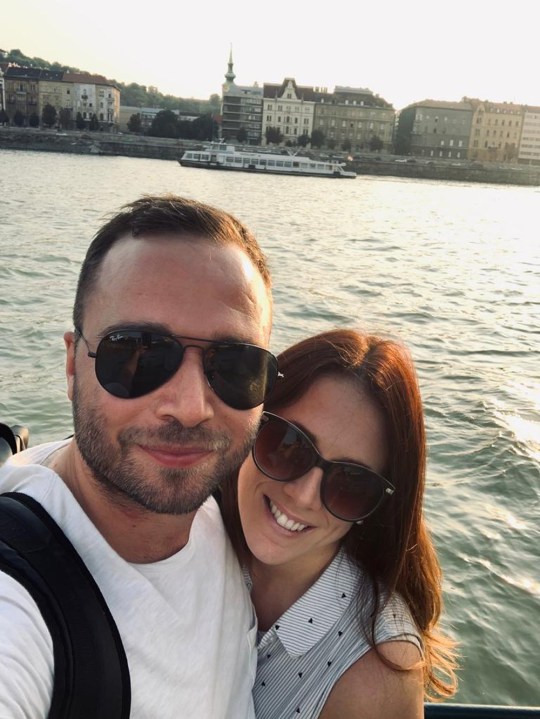 On the way to Budapest, Danielle shocked other passengers by screaming after nodding off (Picture: PA Real Life)

The couple were put to the test in August 2019, when they went on a weekend break to Budapest.

Unfortunately, the couple were seated separately on the plane, with John sat one row in front of her, so he was not able to quickly wake her up by gently shaking her before she moved on to the next stage – screaming.

‘John recognised the signs, but he couldn’t wake me up quickly enough, so he had to just sit there knowing what was coming,’ says Danielle.

‘And then, as he expected, I screamed – I think he was praying that it was a child, rather than me. I woke myself up from that one and was so embarrassed.

‘I said sorry to everyone around me but there was this anxious atmosphere for a second or so.’

During the years the couple have shared a bed, John has had a front row seat to some funny antics.

‘She’ll do this striking action, with clenched fists beating down,’ says John. ‘I’ve been on the receiving end of her kicking, and she’s given me a couple of bruises over the years.

‘Last summer, she poked my eye with her flailing arm. It did hurt for a couple of days – I had a little cut on the bottom of my eyelid. I know she didn’t mean it though.

‘One or two people at work gave me a funny look the next day – they were too polite to say it but they probably thought I’d gotten into a scrap the night before.’

He concluded: ‘Danielle’s certainly worth the hassle! As time goes on, it doesn’t phase me as much. While I’ve lost count of the amount of times I’ve woken up with my heart racing from a scream, there have been so many fun moments.

‘I wouldn’t have it any other way, and I’m sure they’ll continue.’

Danielle said that thanks to ruling out more serious underlying conditions, she can now see the funny side of her antics – and encouraged anyone with similar sleep behaviour to seek a medical opinion as it could be a sign of something more serious: like sleep apnoea, a condition when people stop breathing in their sleep.

To find out more about Sunrise, a medically certified, at-home sleep test which can help diagnose sleep apnoea, visit uk.hellosunrise.com.