THE NHS in London has been told to prepare for a third wave of the coronavirus later in 2021.

From this month, bosses will need to start planning for the “possible surge” of cases – modelled to peak around July or August. 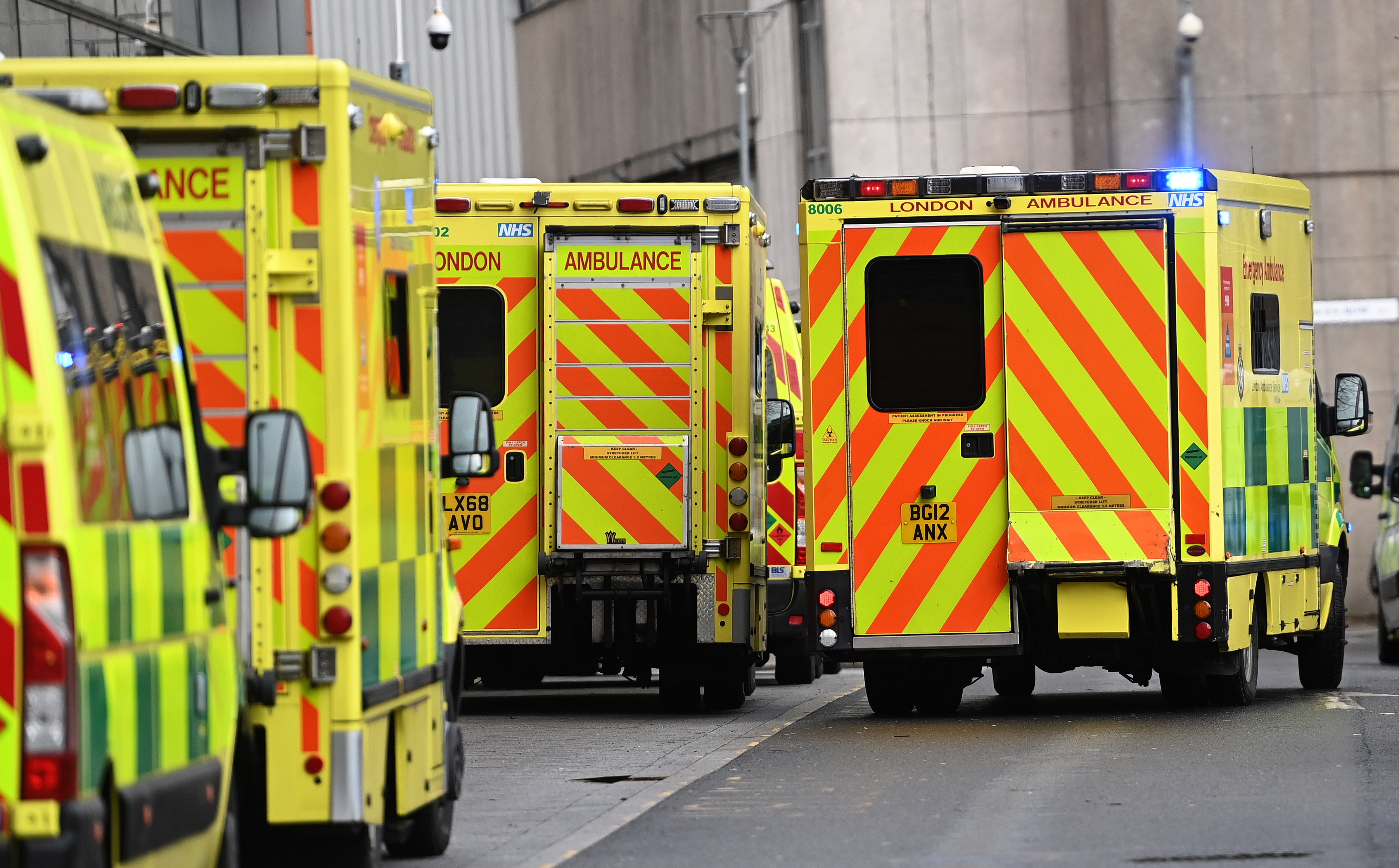 The NHS in London has been told to prepare for a third wave of the coronavirus later in 2021. Pictured: Ambulances outside the the Royal London hospital in London, Britain, 18 February 2021, during the second wave of CovidCredit: EPA

It will involve giving NHS staff “immediate respite” after the gruelling year they have endured, and a plan to tackle operation backlogs.

The guidance, called the “spring recovery planning” and seen by the Health Service Journal (HSJ), says: “Later in March/early April we will ask for systems to begin to plan for a possible wave 3 covid surge.”

“[The] purpose of the critical care de-surge plan [is to] ensure that the… bed base can expand safely in the event of a 3rd covid surge and/or other major incident/event.”

The guidance for London ahead of any other region in the country, “surprising” senior figures who are waiting for a nationwide approach.

The capital was hit hard in the second wave of the pandemic, leading to the announcement of a major incident by the Mayor Sadiq Khan on January 8.

It meant emergency services and hospitals could not guarantee their usual service, as Mr Khan said the spread of Covid was “out of control”.

There are still 2,000 patients with Covid in London hospitals, with each person admitted spending on average three weeks under NHS care.

Some 100 people are being admitted to hospitals in the capital each day, down from highs of 900 in January.

But experts say the NHS still has a long way to go, with pressures not expected to ease until well into the spring or even summer.

People in their 50s aren’t expected to have protection from their vaccines until roughly early May, while those in their 40s and 30s – who can still be admitted to hospital for Covid – won’t have immunity until the summer.

Meanwhile, the millions of people on London’s NHS waiting list for treatments may be waiting another two years, it’s been warned.

Professor Marcel Levi said University College London Hospitals NHS Trust, told the Evening Standard treating the capital’s backlog of patients will be a “marathon” and the “biggest challenge” for the NHS. 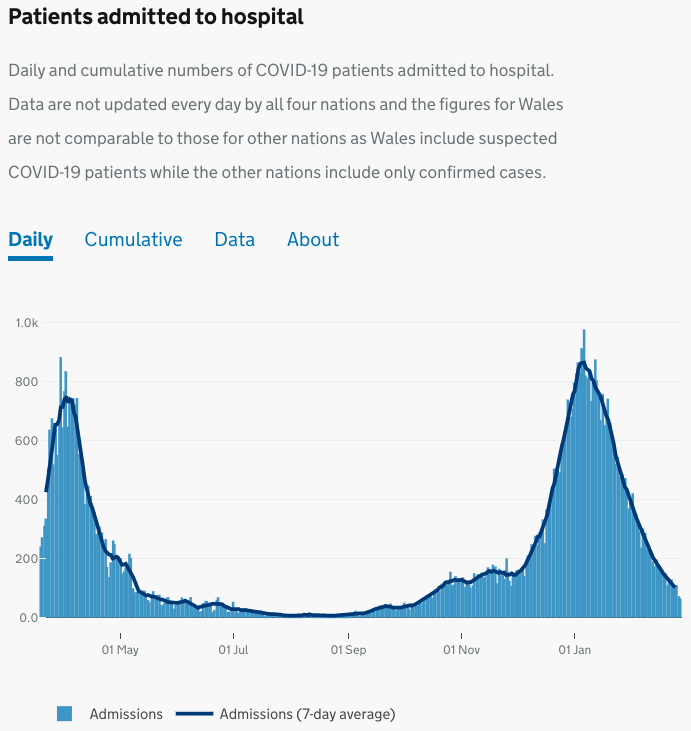 Some 100 people are being admitted to hospitals in the capital each day, down from highs of 900 in January 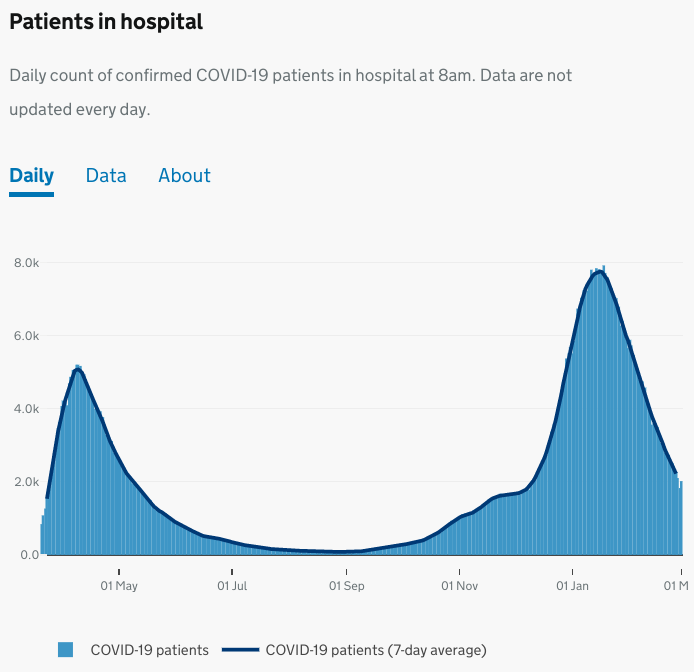 There are still 2,000 patients with Covid in London hospitals

Third wave on the cards

Another wave of cases and deaths is inevitable even if the lifting of lockdown were delayed for six or nine months, Prime Minister Boris Johnson said when announcing the cautious plan to normality.

Modelling given to the PM by Sage – the government scientific advisory group – showed that even with a slow unlocking, another wave would occur, killing up to 80,000 people.

The severity of it would depend on the uptake of the vaccine, and how well the vaccine works to prevent spread of the virus, as well as severe disease and death. 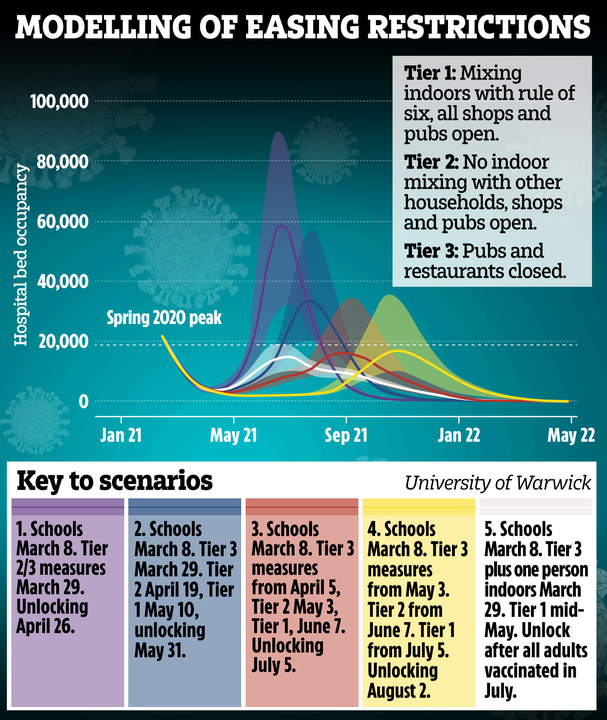 Modelling shows that even with the slow unlocking planned (scenario number five), there will be an unavoidable third wave which could see several thousand die

A proportion of the population will either refuse the vaccine or fall through the gaps.

This group of vulnerable people will be sizable enough for the virus to cause another surge in cases, given that all restrictions, including social distancing, are to be scrapped by June.

The unlocking of society is planned to be “irreversible”.

There is also the threat of new variants of the virus, including those from South Africa and Brazil.

These strains have some ability to evade immunity built from prior infection or vaccines that have been developed based on the “original” Covid strains.

Matt Hancock said that there may be a need for a third Covid-19 vaccination dose over autumn against new variants.

The Health Secretary told the Commons on Tuesday: “Now, we know for sure that we seek to vaccinate with two doses every adult in the UK, there may well be a need for a third vaccination over the autumn against variants and there is currently a clinical trial considering the vaccination of under-18s.”

Officials say the current vaccines, from AstraZeneca and Pfizer, should still work to prevent most severe disease and death caused by dominant strains in the UK.

And if a new variant emerges that renders the vaccines useless, ministers say jabs can be rapidly tweaked.