A NEW Covid wave could hit as school and office workers return next month.

Scientists fear case and hospitalisation rates will surge into September, based on the current trends.

People are starting to return to the office, as commuters are pictured on London BridgeCredit: Rex

Professor Neil Ferguson, a scientific government adviser, told the Today programme on Radio 4: “Numbers have basically plateaued at this time and are really quite high, about 30,000 cases-a-day.

“That’s a slightly sobering situation coming into September because our contact rates are at half the levels and we will be opening schools going back into offices.

“So we have the potential for quite a large wave going into September/October.”

After a dramatic fall from mid-July, cases are now on an upward slope yet again.

Prof Ferguson warned the UK could still see 100,000 daily Covid cases this autumn, higher than the record 81,500 reported on December 29.

This could lead to 1,000 hospitalisations per day, up from the 880 currently, he warned.

But this is significantly lower than the record 4,600 on January 12. 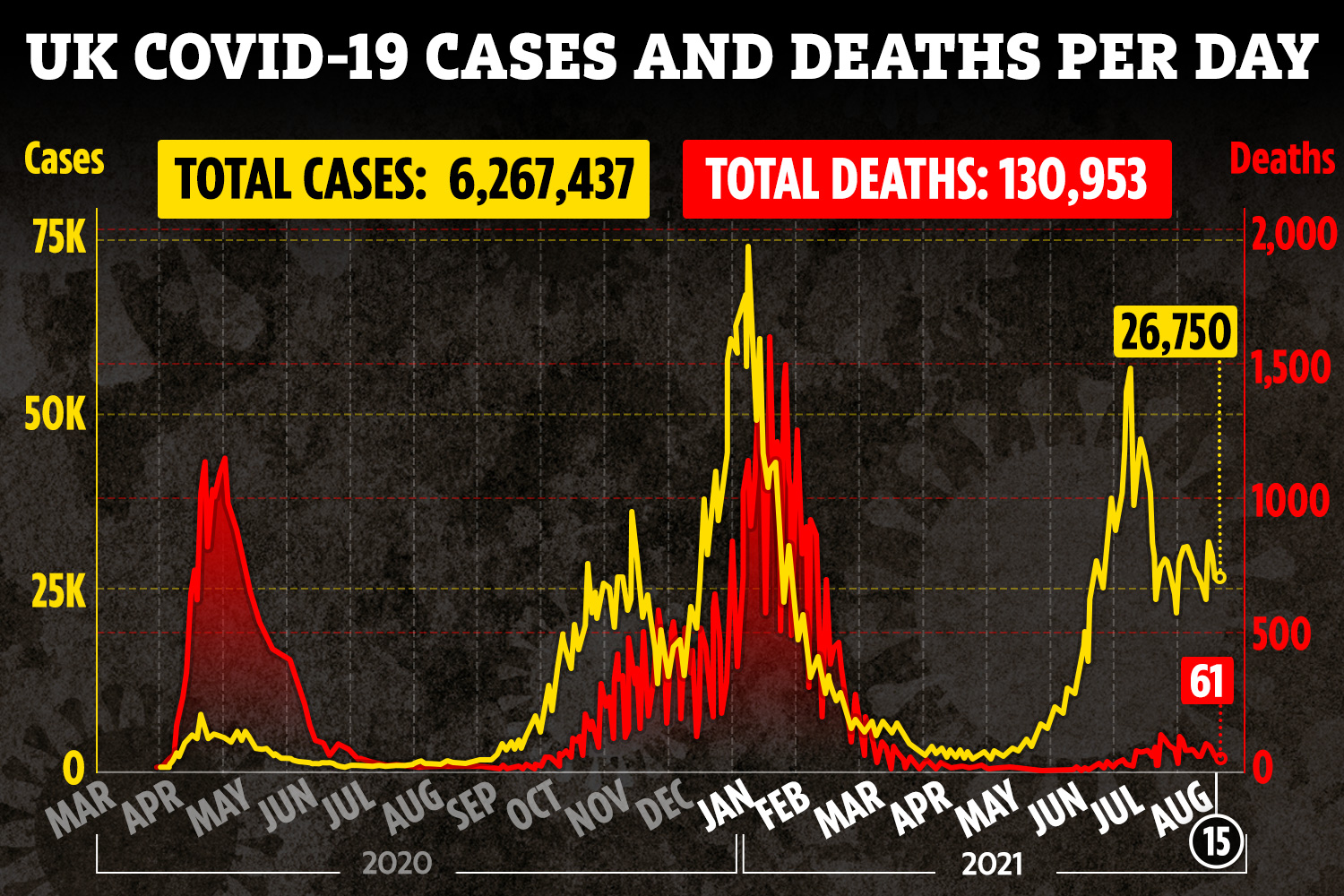 Prof Ferguson added it is “unlikely” that any surge in hospital admissions will lead to levels of deaths seen before thanks to the vaccination programme.

The comments come just three weeks after Prof Ferguson said the worst of the pandemic could be behind us by Autumn.

He said on July 27: “I’m positive that by late September or October time we will be looking back at most of the pandemic.

“We will have Covid with us, we will still have people dying from Covid, but we’ll have put the bulk of the pandemic behind us.”

It’s unknown at this stage the impact the cold winter months will have on the outbreak.

Vaccines rates will continue to soar into the autumn, with a booster jab expected to start in September.

A new target of vaccinating all 16 and 17-year-olds has been set for next Monday (August 23) in the hope that teenagers will be protected with one dose by the time they return to school.

Meanwhile 77 per cent of the adult population have already gotten both their jabs, giving maximum protection against the coronavirus.

“Vaccination is having downward pressure on transmission”, Prof Ferguson said.

Last week, Professor Sir Andrew Pollard, director of the Oxford Vaccine Group, suggested the concept of herd immunity is “not a possibility” due to the more transmissible Delta variant of the virus.

Before we know it schools will return, and more socialisation will take place indoors, both of which will further drive transmission.

He referred to the idea as “mythical” and warned that a vaccination programme should not be built around the idea of achieving it.

Asked about this, Prof Ferguson said: “To some extent we have this population immunity which is putting this downward pressure on virus – whether it’s ever going to be enough to stop transmission is an open question.

“We may move to a much more kind of endemic situation or hopefully low-level transmission in the population.

“And we know that immunity wanes over time so we’ll probably have to top up vaccination at some point.”

He said that the relaxation of self-isolation rules in England, from August 16, could add to a “little” increase in cases.

In a further step to normality, fully-vaccinated adults will no longer have to isolate if they come into contact with someone who has Covid.

They are advised to take a PCR test, but that is not compulsory and they do not have to self-isolate while they wait for the result.

Commenting on the move, Dr Peter English, Retired Consultant in Communicable Disease Control, said: “I am very unconvinced that this policy change is a good idea, certainly now while we have very high case numbers, and if we had low case numbers it would not be necessary anyway.

“Various experts have previously recommended that we can go back to normal when case numbers have fallen, ideally to fewer than 10 cases per 100,000 population per week.

“We are clearly a long way from that; and the decline in case numbers we saw recently seems to have plateaued – case numbers are no longer falling.

“And before we know it schools will return, and more socialisation will take place indoors, both of which will further drive transmission.”