After years of wanting a puppy, here she finally was.

I was 18 and, within two days of my dad agreeing that I could get a dog, I collected Diamond, a white maltese mix.

I was delighted to finally have her, but it felt so surreal. I remember thinking: ‘Is she really mine?’

Despite my excitement, I never could have predicted the enormous impact she’d have on my mental health and, by extension, my life.

Five years later, not only is she the only reason I’m still alive, she’s helped me build a whole new life for myself – including a new business, friends and even a second family.

I’ve struggled with my mental health for over 10 years.

When I was 14 years old, I started having panic attacks. I was bullied throughout school and the combination of teenage hormones and female autism didn’t exactly go well together.

I would get confused and there would be misunderstandings between me and my parents, so it was a very difficult time for me.

About a year later, everything came to a head. I stopped eating and ended up in hospital. It’s sad that it had to get to that stage.

I think I was just desperate for someone to care. It was my coping mechanism. I knew I wasn’t getting the help I needed and it was as if my brain thought trying to control my food, and even ending up in hospital, was a way of getting support.

I felt that way for a long time – until Diamond came into my life in September 2017.

Her constant companionship has been my solace and she’s just always here, by my side when I need her.


I became a professional dog groomer, which wouldn’t have happened without Diamond (Picture: Rachael)

If I’m feeling good we can go for a walk and if I’m not feeling 100% then I can pull her in for a cuddle. Sometimes it’s not something that I even need to do. She can just sense that I’m shutting the world out and she’ll come over and start licking me. She’s intuitive to my needs and will come and provide that comfort.

Nearly a year ago, at the age of 22, I moved out of my home in Suffolk and I relocated to Essex.

The owner of the flat, Hazel*, wanted to rent it to someone with a dog because she knew how difficult it is to rent with pets. I am now incredibly close to Hazel, and her mother, Vera*. They have become my second family, which never would have happened without Diamond.

In the past I’ve found it difficult to make friends, but having Diamond in my life has allowed me to build those connections.

I posted on a community page asking if people would like to meet us for a walk. Now, someone I met online is one of my closest friends. I went to theirs for Christmas and I’m now aunty to their new baby.

I’ve also got my own business, thanks to Diamond. Being a maltese mix, she can get very fluffy, so needs grooming. I didn’t have much money to get her professionally groomed so I bought a pair of clippers and scissors. She hated it at first, and would bite and run away, but eventually she got used to it.

I was then inspired to become a professional dog groomer and opened a salon out of lockdown. For the first six weeks, we were fully booked and it’s taking off and going really well. None of this would have been possible without Diamond.

I’m so lucky to have found people who will support me because for so many years I grew used to going through everything by myself. 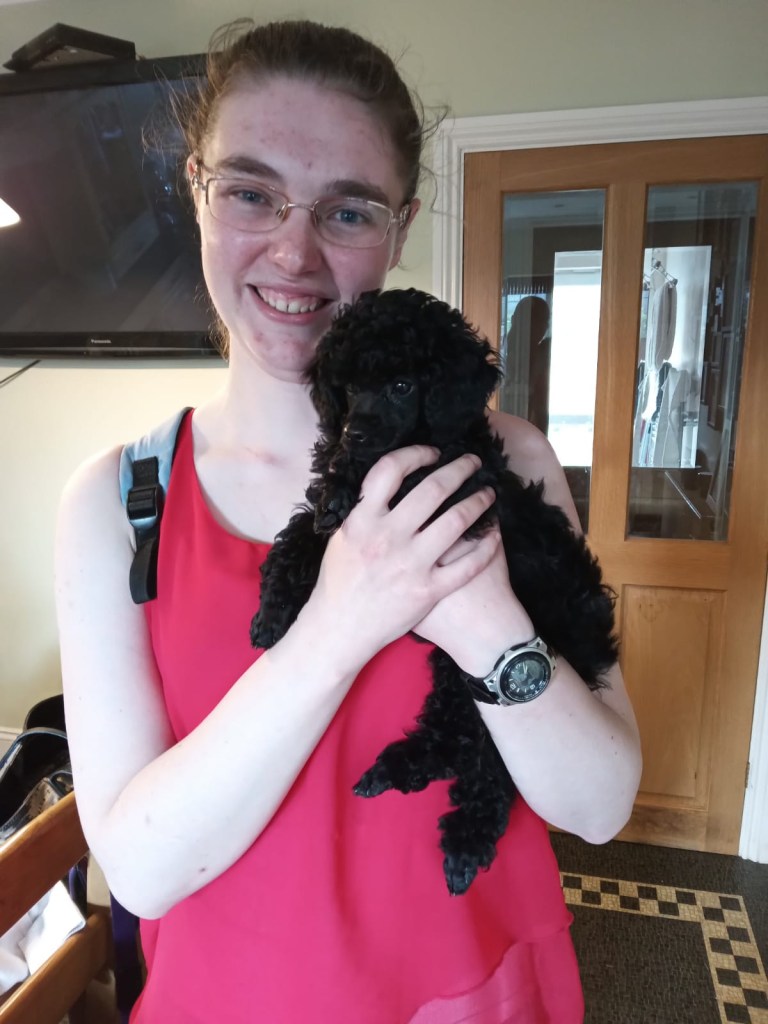 Amethyst, a toy poodle, will be joining Diamond and I (Picture: Rachael)

I have been suicidal in the past, feeling like there’s no-one to talk to. Now I have Diamond, Hazel and Vera. Through each of them, I’ve learned a lot about myself and why I react the way I do and how I manage my feelings.

I would always recommend therapy and medication for those who need it, but for me, what I needed was a community.

I really suffered with loneliness but now I have built up a support network that I feel I can lean on in times of need.

It’s just knowing that you’ve got someone you can talk to, who loves you and cares about you, which means the world.

None of this would be possible without Diamond.

When I look at her, I feel that same sense of excitement and awe as I did when I was 18 years old.

I think: ‘Are you actually my dog? How has this happened?’

We’re welcoming a new addition to our family soon – Amethyst, who’s a toy poodle. Time will tell how the two of them will get on, but at 23 years old I’m more optimistic for the future than I have ever been.

My dog really did save – and change – my life.

*Hazel and Vera are pseudonyms

YoungMinds have launched a self-care hub with tips, information and blogs from other young people about self-care: how to do it, what it looks like for different people, and how to do self-care when you’re really struggling with your mental health. Visit to find out more.