He has been my rock, my comforter for four years – now, Fin needs my help (Picture: Emilee Morrallis)

When I was told by vets that my beloved rescue dog, Fin, had a brain tumour, I couldn’t quite believe it.

I froze, my face dropped and I felt sick.

Two hours prior, experts were confident that Fin had epilepsy, but I was now being told that my poor boy had cancer.

I got off the phone to the vet and told my partner I couldn’t talk about what was happening until I was home because I knew that once I started crying, I wouldn’t be able to stop.

It began in October when Fin, my Staffie-whippet crossbreed, had a seizure. It came completely out of the blue.

One dinner time, Fin stood up from bed, keeled over and started frothing at the mouth. He’d been more clingy than usual, crying a day or two before the seizure happened, as if he knew it was coming.

I was beside myself, terrified I’d lose him right there. Had he eaten something poisonous, perhaps?

I took him to the emergency vet straight away. After his blood had been checked, the vet thought the problem was idiopathic epilepsy, which can occur in dogs under six years old. Fin was five at the time.

Over the next few weeks, Fin’s fits became more frequent and more severe, to the point where they were occurring once every two or three weeks, and he’d take a day or two to get back to his usual self. By January 2021, he’d started taking epilepsy medication.

Initially, the medication worked really well, apart from some side effects of him being tired and hungry. But he had a bad seizure on 14 February and then ended up having four fits in just three days. They became more frequent after that, occurring every two to three weeks.

Then in May, Fin suffered three seizures in the space of a week. I was referred to a neurologist for an emergency MRI scan and we ultimately received the awful news that Fin had a large brain tumour.

It began in October when Fin, my Staffie-whippet crossbreed, had a seizure (Picture: Emilee Morrallis)

Because of where it’s situated, invasive surgery isn’t an option. I was told I could keep him on medication, keep him comfortable but sooner or later he’d have a fatal seizure. That just sounded horrendous and it was heartbreaking to hear.

I’ve been in Fin’s position; I know how it feels to be given a cancer diagnosis. Just because he’s a dog, Fin’s life isn’t any less valuable.

After breaking my leg twice at ages five and nine, I was diagnosed with Ollier’s disease, a rare genetic disorder that causes cartilage lesions and means the bone doesn’t form properly.

Fast forward to June 2016 and I noticed a small ‘dent’ on my leg, as if someone had taken a bite out of it. Specialist appointments followed and the pain escalated to the point where I was on morphine. The root of the problem was a 12cm tumour, which I then had surgically removed.

Doctors at first thought it was benign. But on Valentine’s Day 2017, when I was 24, I was told that it was cancer – chondrosarcoma, a form that doesn’t respond to treatment. The tumour had already been taken out so I didn’t have to undergo any more surgery. But I also wasn’t eligible for chemotherapy or radiation. It was just a case of constant monitoring, which continues to this day.

Now, I am cancer-free, but I needed major limb reconstruction and the pain is still constant. Because of the imbalance caused by the removal of this large tumour in my left leg, I had to also have 5cm of the femur in my right leg removed to even me out, as it were.

So how does Fin fit into all of this?

Well, I got him in the on 11 September 2016, in the period between finding the tumour and being diagnosed with cancer. 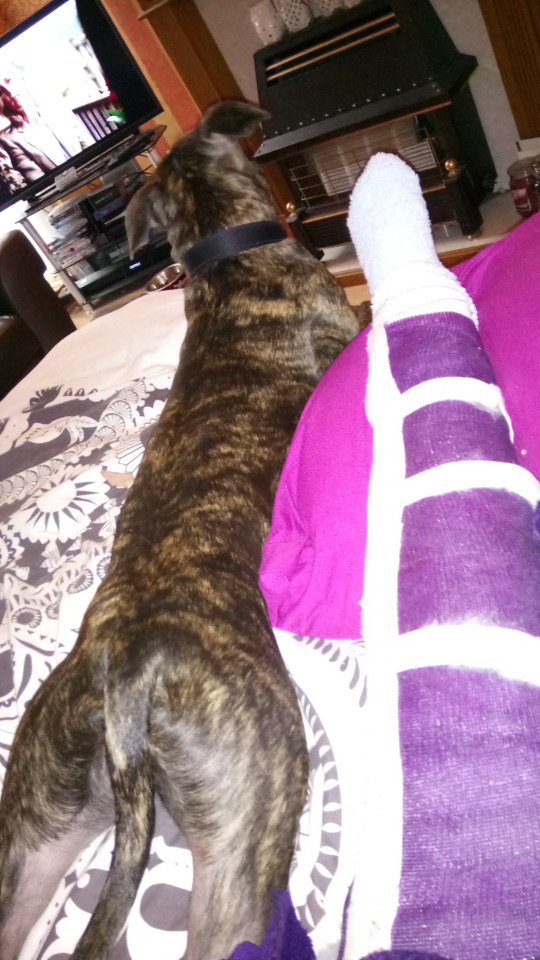 Fin was by my side every night, at every step as I learnt to walk again (Picture: Emilee Morrallis)

He was just a year old, a gangly pup found abandoned on a bench in Warrington. The staff at Cheshire Dogs’ Home described him as ‘the dog with human eyes’. He’s just so expressive, giving you the side-eye and the raised eyebrow.

At first, I wasn’t sure if he was the right dog for me. He was so energetic, like Tigger. Would he be too much to deal with? But I wanted to have a companion during my recovery and one look at Fin’s eyes made me fall in love with him. He’s a gentle soul with a giant heart. You go to a rescue centre with the intention of choosing a dog but Fin definitely chose me.

I was lucky if I had two hours’ sleep a day at that point because of the constant pain. But he looked after me. He instinctively knew that he needed to be calm around me. He’d sleep with his head next to the surgery site, as if he was guarding it, protecting it from further harm.

As I lay awake all night in pain, he kept his head on my lap. Fin instinctively protected my wounds.

Fin was by my side every night, at every step as I learnt to walk again – twice – and he kissed away every tear. He followed me everywhere, just in case I fell. He has been my rock, my comforter for four years and is, quite simply, one of the most important things in my life.

So when I found out he has a cancerous brain tumour, I knew I had to help him heal the way that he helped me. 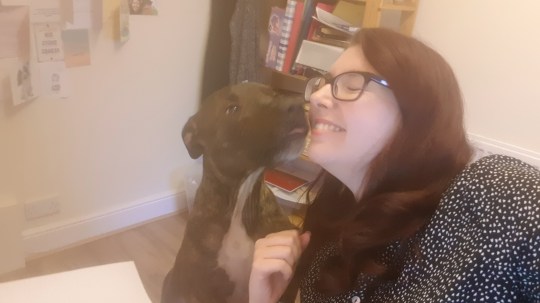 I had to help him heal the way that he helped me (Picture: Emilie Morrallis)

There is, sadly, no doggy equivalent of the NHS. I’m crowdfunding to raise £6,000 in order to give Fin revolutionary canine radiotherapy treatment to either save his life or prolong it.

He has been referred for canine radiotherapy at a specialist centre in Edinburgh to try and shrink the tumour. Costing at least £8,000, there are only three places in the UK that provide this animal radiotherapy. I want him to have 20 doses in all and he’ll need to stay in Edinburgh for a month, with periods of intensive care.

Our pet insurance will cover some of the cost but I need to find £6,000 out of my own pocket. He only has one chance at this so he needs the best treatment I can get him. The specialists in Edinburgh aren’t talking about a ‘cure’, as that’s not a given, but we’re talking about clawing back years of Fin’s life.

My friends at Liverpool Hope University are helping to raise funds, too, through a sponsored walk to the top of Snowdon in Wales that’s due to take place in the coming weeks. My friend Jen Hough – a lecturer at Hope and herself a dog owner – has been doing all she can to try and help me.

I would never do anything to put Fin in more pain. I don’t want to be selfish about this. But we haven’t gone past the point of no return. He’s very young to have this type of tumour – and it can be treated.

If we don’t do anything, we’re looking at a couple of months, tops. If we act now, he could be with us two, three years from now. And hopefully much longer.

Thinking about life without him is unbearable. It’s my turn to look after him now. His life is definitely worth fighting for.

MORE: Your suspicions are correct: Humans love dogs more than other people

MORE: My dog was one of the loves of my life, and now he’s gone