No matter how old they get, they’re always your baby. (Picture: Sue Forrester)

Mikaela smiled weakly, before putting on her mask and wandering into The Christie, Manchester, in November 2020.

‘See you later, Mum,’ she croaked. I could see she was tired and scared but putting on a brave face.

It’s heart-breaking having to watch your child walk into hospital, knowing they have to endure chemotherapy alone.

As a mum, you want to take away their pain and, when you can’t do that, you at least want to hold their hand.

But, due to Covid-19 restrictions, hospitals only allowed the patient inside. It seemed so cruel for this to apply to my 18-year-old girl.

After 10 months back and forth to the doctors, in July 2019 Mikaela had been diagnosed with Stage 2 Hodgkin lymphoma – a type of blood cancer meaning she had too many white blood cells.

I felt guilty then for not pushing the doctors harder – Mikaela had been complaining of pain and swelling in her right upper armpit and shoulder but the GP had advised it was a pulled muscle.

It was such a bombshell, I was reeling in shock and confusion but at least, back then, I was able to attend all appointments with her and soothe her fears. By her side before she had surgery to remove two lymph nodes followed by gruelling chemotherapy sessions.

Cancer is a scary word even for adults, but for children who don’t yet know the world to be told they have a possible death sentence hanging over their heads, I believe it is deeply unfair to separate them from their parents.

No matter how old they get, they’re always your baby. We were so relieved when she went into remission in October 2019.

Only, in March 2020, she had relapsed – just as Covid-19 hit and the restrictions came in.

Suddenly, Mikaela had to undergo three weeks of radiotherapy plus fertility treatment to freeze her eggs – such an intimate procedure to have to endure solo, followed by further chemotherapy. I hated being forced to leave her unaccompanied. 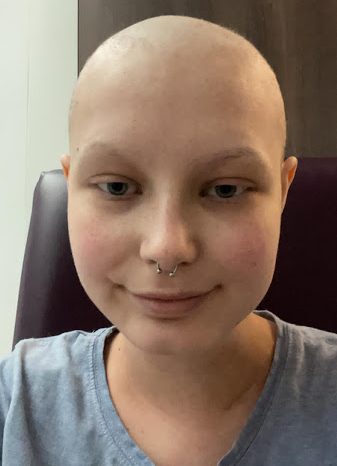 My exhausted Mikaela had more chemotherapy leading up to the transplant (Picture: Sue Forrester)

It was a frightening time but the outlook seemed positive when in October 2020 she went into remission again – we were delighted.

Next, she had her stem cells collected ready for a stem cell transplant – replacing unhealthy bone marrow with fresh cells – meaning it’d lessen the chance of the cancer ever returning.

My exhausted Mikaela had more chemotherapy leading up to the transplant. Her immune system had to be at zero in order for it to work – we had to be extra vigilant in shielding.

That day in November, I’d expected her to be allowed home as usual until she texted me out the blue – she wasn’t coming back as she had a temperature.

Concerned staff made the decision to admit her until after her stem cell transplant scheduled in December.

I couldn’t believe it. She’d no overnight bag with her and all we could do was drop some possessions at the hospital entrance.

Without warning, I felt like my baby had been snatched from me – it was as if she’d been kidnapped.

I hadn’t been able to hug her goodbye. In normal circumstances I’d have been allowed to sleep on a bed beside her in her room.

I know how difficult it is for NHS staff – I myself spent years as a midwife – and actually took retirement early last summer because I worried I’d bring the coronavirus home to Mikaela while she was poorly.

We were able to Facetime twice a day but she was usually so tired I’d get only a nod from her – too weak to be on the call for more than a minute or two.

Mikaela was tearful at times while in hospital as she felt so afraid and unwell. She had the procedure on 1 December – I longed to hug her but it was an impossible wish.

Denied being able to follow my motherly instinct made me fall apart.

My husband Steve, 68, tried to comfort me but I was beside myself with worry.

I kept thinking about how during previous hospital stays Mikaela would only drink because I was next to her putting it to her lips but this time I wasn’t there. The nurses don’t have time to sit with each patient like that.

And no matter how good the staff are – no-one can replace your mother.

It was agony. Every time we talked, I’d hang up and burst into tears but I never let her see me cry.

The worry and guilt for not being at her side – through no fault of my own – was unbearable.

Thankfully, the stem cell transplant was a success. Mikaela was discharged on 15 December in time for Christmas and she rang the end of treatment bell on 10 February. 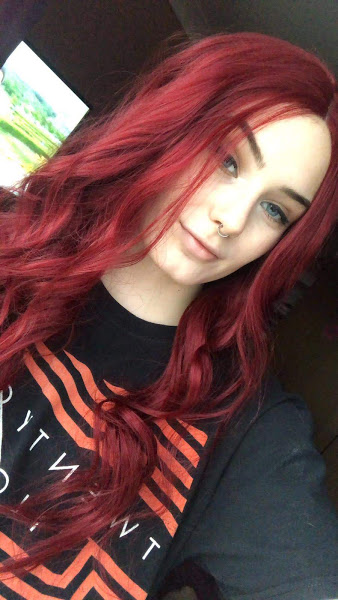 I’m so proud of the woman she’s becoming and I’m determined to be here to hold her hand no matter what life has in store for her next (Picture: Sue Forrester)

I’m relieved everything’s turned out OK but I wouldn’t wish this on any other parent – and I know we’re not alone as many other 16-25 year olds with cancer have had to go through it.

Seven young people aged between 13 and 24 are diagnosed with cancer every day in the UK, amounting to around 2,500 every year and a survey by the charity CLIC Sargent found 90% of sick young people had been to treatment alone.

That’s why I’m supporting Teenage Cancer Trust and CLIC Sargent’s Hand2Hold campaign – while some young cancer patients get to have a loved one by their side, others living in neighbouring areas can’t. This isn’t fair.

Mikaela’s been brave all the way through, although several tears have been shed, she managed to fight cancer all while finishing her A-levels in philosophy, psychology and media – she’s deferred her place at university until next September but she cannot wait for lockdown to lift and see her friends.

I’m so proud of the woman she’s becoming and I’m determined to be here to hold her hand no matter what life has in store for her next.

Teenage Cancer Trust, together with CLIC Sargent, are calling on the Government to ensure all young people have the opportunity to have a loved one with them during cancer treatment and at associated appointments. Find out more here.

The Year That Changed Us

The past year has been… weird, to put it lightly.

12 months of living with Covid-19, from the restrictions on our old way of life, to going in and out of lockdown, to being confronted by the reality of death and illness, is bound to have radically changed us.

We may never go back to the way we were before.

Our series, The Year That Changed Us explores all the ways we’ve been impacted by the pandemic and how these effects will stick with us long-term, from our friendships to the nation’s mental health.

You can read the full series here.