A HEARTBROKEN mum whose baby girl died of Covid has told how online pregnancy forum scare stories put her off having the vaccine.

Ivy-Rose was born premature and tested positive for coronavirus, her family are now trying to raise money for her funeralCredit: MEN Media 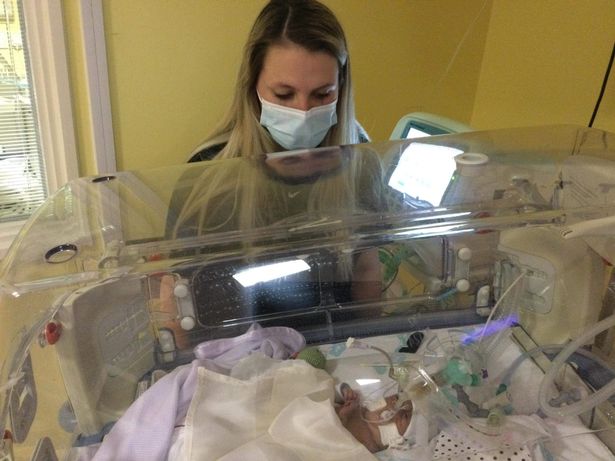 Katie Leeming said she didn’t have her Covid vaccine as she had been concerned after reading scare storiesCredit: MEN Media

Her mum, Katie Leeming started with cold-like symptoms in October and tested positive for Covid after getting PCR test.

The 22-year-old hadn’t received a coronavirus vaccine as she felt there was ‘too little’ research into the side effects of pregnancy.

Coronavirus vaccines are safe for pregnant women and while only six per cent of the population are reluctant to get jabbed, one in three women who are hesitant say it is because of fertility concerns, according to the Office for National Statistics.

Katie had been among this six per cent and said she had read stories on forums about women losing their babies after having to coronavirus vaccine.

She said: “There obviously could have been other reasons for this, and the vaccine might not have caused it, but it scared me and put me off.

“Just hearing the horror stories about women having miscarriages made me not want to take the risk.

“I don’t know if it would have made a difference or not. I had thoughts in my mind about it – what if I’d had it? Would she still be here today? What if it’s my fault?

“But my midwife told me I can’t afford to think like that.

“I could have still caught Covid-19 after the vaccination, or worse, if I did have it and something happened anyway, I would have blamed the vaccine.”

There is no evidence to suggest the vaccine affects female fertility, says the Royal College of Obstetricians.

Shocking data also previously revealed that one in five of the most critically ill Covid patients were pregnant women.

Data from more than 100,000 vaccinations in pregnancy in England and Scotland, and a further 160,000 in the US, show no subsequent harm to the foetus or infant.

England’s top midwife Jacqueline Dunkley-Bent said: “The Covid jab can keep you, your baby and loved ones safe and out of hospital.

“You can receive vaccination at any time in pregnancy, but the risks that unvaccinated pregnant women face of becoming severely unwell if they catch Covid-19 show exactly why we advise you to do so as soon as possible.”

They told us to go in and be with her, because they weren’t sure she was going to make it through the night

Katie said she felt fine when she first caught Covid but that on day seven, she started to have chest palpatations.

She got in touch with the hospital, and medics told her the baby’s heart rate hadn’t been where it should.

Medics told Katie they had to deliver Ivy there and then.

Katie said: “I have had two other premature children, so I knew what I was expecting, and what the risks were.

“But I was trying to be as positive as I could, knowing how my other children survived. It wasn’t until five days later, when she caught Covid, that she started deteriorating.

“On October 21, she started going down quickly. They told us to go in and be with her, because they weren’t sure she was going to make it through the night.”

Ivy was initially being treated at the Blackpool Victoria Hospital but was transferred to Royal Preston Hospital neonatal unit.

The infant’s heart rate and oxygen levels had severely declined.

She continued to deteriorate, and the heartbreaking decision was made to switch off her life support in the early hours of October 22.

Katie added: “By 11pm, they said too much damage had been done, and the kindest thing to do would be to let her go.

“But they gave us a few hours to hold her and be with her.

“Every hour is different. I have been through all the stages of grief and back again.

“I’ve gone from feeling completely numb, feeling as if nothing has happened and expecting to feel the baby’s movements – because I should still be pregnant with her – to completely heartbroken about how it all happened. I’m devastated.”

The family are now trying to raise money for little Ivy’s funeral.

Katie’s friend Simone Threlfall, 25, set up a fund-raiser to help with funeral costs.
She said: “You don’t expect to have to pay for your child’s funeral. There’s nothing that anyone can do to prepare for such a terrible thing.

“There’s nothing we can do to make it right. All we can do is help. Katie would never ask for help, but when I told her about the fundraiser she was relieved; it was like a weight had been lifted. It’s something so small, but it can mean a lot.”

A spokesman for Blackpool Teaching Hospitals NHS Foundation Trust added: “We are deeply saddened about the death of Ivy-Rose and all our thoughts are with her family at this incredibly sad time.”

what to expect from Paul Rudd & Will Ferrell show