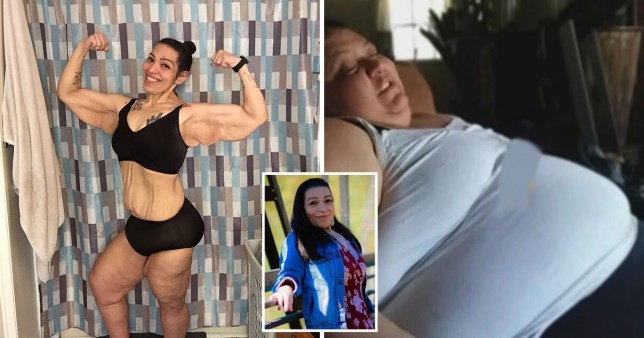 Stay-at-home mum Evelyn Morales LaGrange was overweight throughout her childhood, but started to gain rapidly after the birth of her daughter in 2007.

In 2009, the 36-year-old, from Texas, was diagnosed with hypothyroidism, a condition in which the thyroid gland doesn’t produce enough of the hormones which regulate metabolism.

As a result, Evelyn found it impossible to avoid piling on the pounds and at her heaviest weighed 500lbs.

In February 2017, Evelyn suddenly felt a sudden pain in the back of her head, losing her vision and control of her bowels.

She was diagnosed with Chiari malformation, a condition in which brain tissue extends into a person’s spinal canal, due to the brain being too big for the skull.

Following her diagnosis, doctors told Evelyn that brain decompression surgery, where a bone at the back of the skull is removed to create more space for the brain, would help alleviate her symptoms.

But because she weighed 500lbs, the surgery was considered too risky and doctors told her that she would have to lose a 300lbs in order for the surgery to go ahead.

After a six-month approval process, Evelyn underwent a gastric sleeve duodenal switch operation, in which the size of her stomach was reduced by 70%. 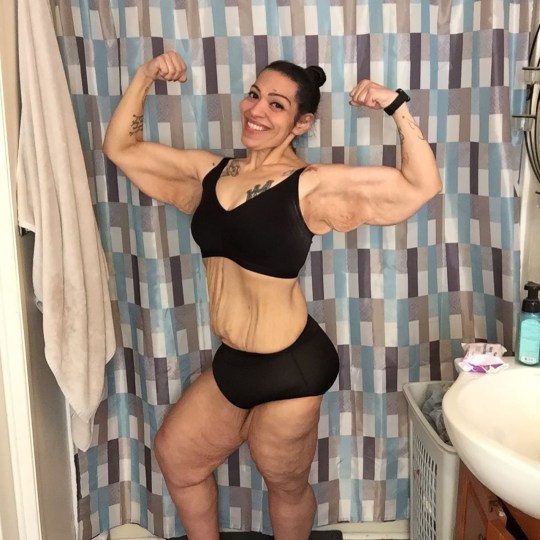 The mum lost the weight to prepare for brain surgery (Picture: MDWFeatures / @evefat2fit13)

As a result of her condition, Evelyn now has poor vision and suffers from migraines and chronic pain every day. She even has to sleep with a CPAP machine in order to help her breathe.

She also had a pacemaker fitted and hiatal hernia repair surgery which have delayed Evelyn’s brain decompression surgery.

While she waits for the surgery, the weight loss has transformed her life. Evelyn is now able to go shopping with her daughter without feeling exhausted and now loves to dance and walk her dogs in the park.

She said: ‘I never wanted to leave my house before because I knew I would soon have to sit down somewhere, but now I am ready to get up and go.

‘Before, I never once thought about paying attention to what I was eating or drinking. I was a single mum so life got away from me as I worked and went to school.

‘I would get home and was too tired to worry about taking care of myself and would eat junk food, which led to me gaining a lot of weight.

‘I also suffered a lot with depression and anxiety so I would stress eat to find comfort.’

Before she started her journey, Evelyn was subject to many harsh comments and stares.

She explained: ‘I embraced the “big girl sex appeal” type of attitude, but I also knew I wasn’t taking care of myself the way I should have been.

‘I would get people asking me if I could even see my feet or tie my shoes.

‘I’ve even had people take pictures of me, kids laugh or stare at me and ask their parents why I was so fat.

‘At times these things would happen in front of my daughter. They would break my heart but I would ignore it and just keep going.

‘I went on a date where we ended up hooking up and in the middle of sex he tells me “you know this would be a lot easier if you were smaller”.’ 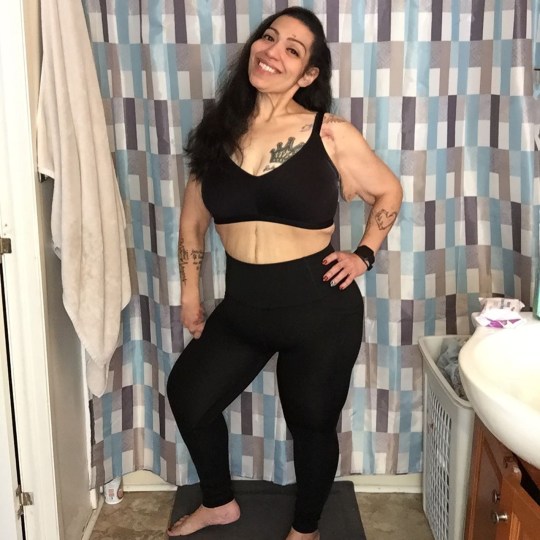 The weight loss has changed her life (Picture: MDWFeatures / @evefat2fit13)

Evelyn is quick to warn that weight loss surgery is not a magic pill that will prevent you from never putting the weight back on and admits that she has had to work hard in order to maintain her new frame.

Now Evelyn has a protein shake and eggs for breakfast, followed by a chicken or tuna salad for lunch. At dinner she typically eats steak with grilled vegetables or salad.

When her Chiari malformation isn’t flaring up, Evelyn likes to dance, go on long walks and do weight lifting exercises.

‘One thing my doctor stressed to me was that having this surgery was not a “magic pill” that will never allow me to gain weight ever again,’ Evelyn said.

‘I’ve had to learn how to eat healthy, make healthier choices and change my relationship with food.

‘I know so many may look at getting the surgery as a cheat way to lose weight but it’s far from it.

‘No one ever told me I could never trust a fart again and the gas I get clears my house. Even my dog runs away from me.

‘The most important thing for people with weight or health issues is to get active.

‘Even if it’s as simple as parking your vehicle a little bit further away from the shop or work just to get those extra steps in.

‘Small changes can turn into bigger and healthier habits in the long run.’