When Annabel Lovick started feeling thirsty all the time and going to the toilet more often, she was worried something was wrong.

Despite its name, it’s not related to diabetes, but is caused by lack of the hormone called vasopressin (AVP) which regulates the amount of fluid in the body.

The 48-year-old started treatment but continued to have health problems.

It came after a difficult few years for the mum-of-two as she had split with her husband of 14 years, moved out of their house and now the health problems meant she had to quit her job as an operations manager for a sales and marketing company. 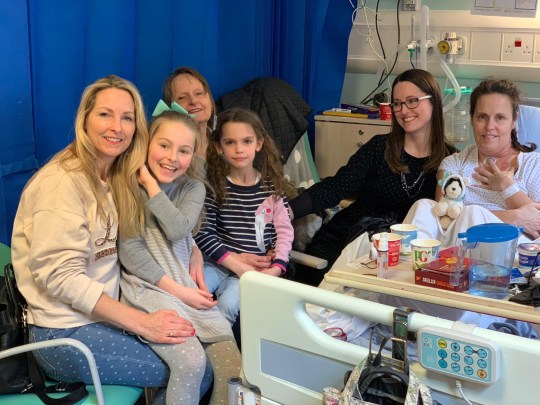 Annabel Lovick in hospital with her sisters Lucy (l) and Laura (r) and nieces Alyena and Belle (Picture: Jam Press)

Annabel, from Bromley, said: ‘I was shocked that something could come about so suddenly overnight and my health had always been really good.

‘My life changed completely because I had to give up my secure job and I had no plans for the summer.

‘I was lucky that I had private cover so I was seen really quickly and was given drugs that stop the symptoms.

‘The scary time came when doctors were trying to work out why I had it and that’s when they found raised levels of something in my blood which prompted them to look for other types of syndromes, blood diseases, leukaemia etc.

‘Even though my symptoms were under control and life was physically near normal, I was always worrying what they were going to find.’ 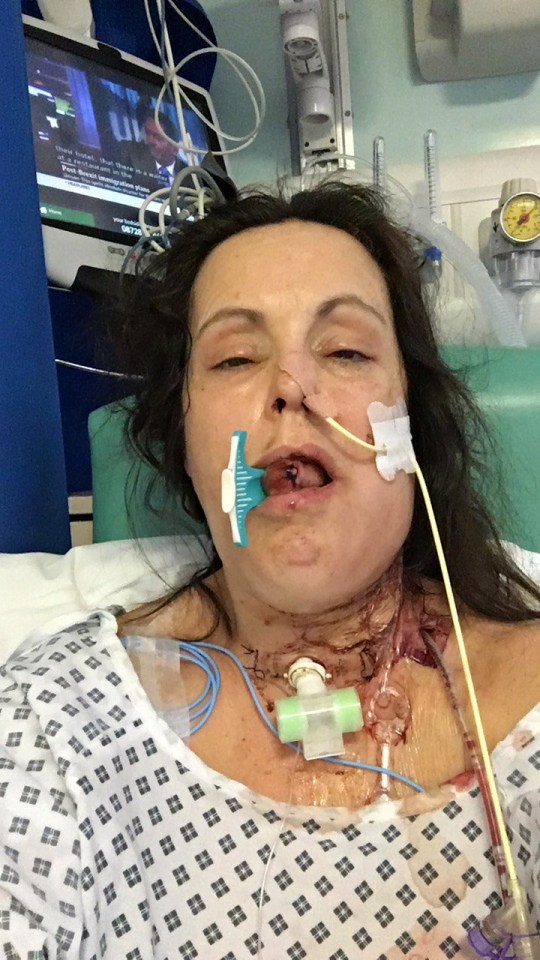 Annabel Lovick in hospital after the operation (Picture: Jam Press)

10 months later, just as she was coming to terms with her diagnosis, she was told that she had tongue cancer, which started with an ulcer.

‘I discovered a small ulcer on the back left side of my tongue,’ Annabel said.

‘It wasn’t terribly uncomfortable or painful but in my opinion was just unusual as I’d never had ulcers before and it had been there for over six weeks.

‘My doctor said it was absolutely fine and not to worry about it because I wasn’t the type of person at risk of getting tongue cancer.’

But a few months later she went to see her dentist, who noticed the ulcer and referred her to the hospital. 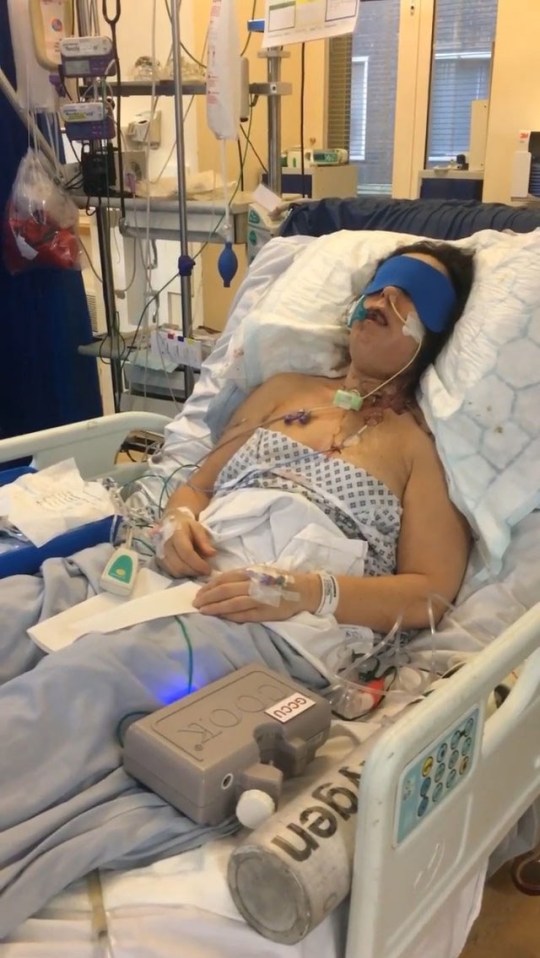 In January 2020, the mum was told that she had stage two tongue cancer.

She said: ‘I received the diagnosis on my own and at the time, I had almost convinced myself it was cancer.

‘But initially, I couldn’t quite believe something else so rare and unrelated to my DI was possible.

‘I was shocked at the potential damage there would be to my voice, eating, speaking because you have no idea how much your tongue does!

‘I cried and I was apprehensive but I think it was scarier for everyone around me.’

Although the cancer was treatable, she was told she would have to undergo a 10-hour operation to remove a third of her tongue, dissect the left side of her neck and remove her lymph nodes.

She said: ‘One of my main worries was how I was going to be able to speak again.

‘I told my sons and they asked lots of questions. One of them asked me if I was going to die and I told him ‘of course not’.’ 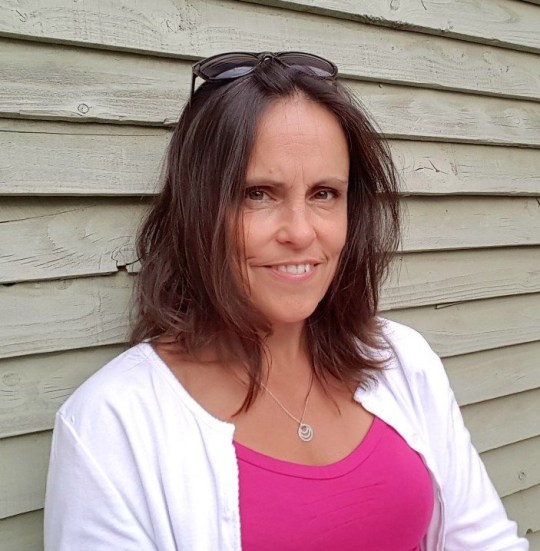 They told her they would reconstruct the organ using part of her thigh.

On the day of the operation in February 2020, she was taken to hospital by her new partner Daryl.

Annabel said: ‘It was slightly emotional when I said goodbye to Daryl, knowing that the next time I saw him things might be different but I actually felt quite calm and just wanted to get it done.

‘They reconstructed my tongue using muscle and skin from my calf, and the associated blood vessels were then reconnected to the blood vessels in my mouth and neck.

‘I had to have a tracheostomy, I had drains in my neck, catheters, feeding tubes, a drain in my leg, ventilation and a doppler in my neck to monitor the blood supply to the new tongue.

‘Once I was out of ICU and a little bit more aware of what was going on I found the restrictions of all the tubes etc. quite alarming.

‘I could barely move and I was virtually doing nothing for myself, I don’t think I had quite understood how vulnerable I was going to feel.

‘On about the second or third day I remember hugging Daryl and crying because my situation felt so depressing, uncomfortable and unfair.’ 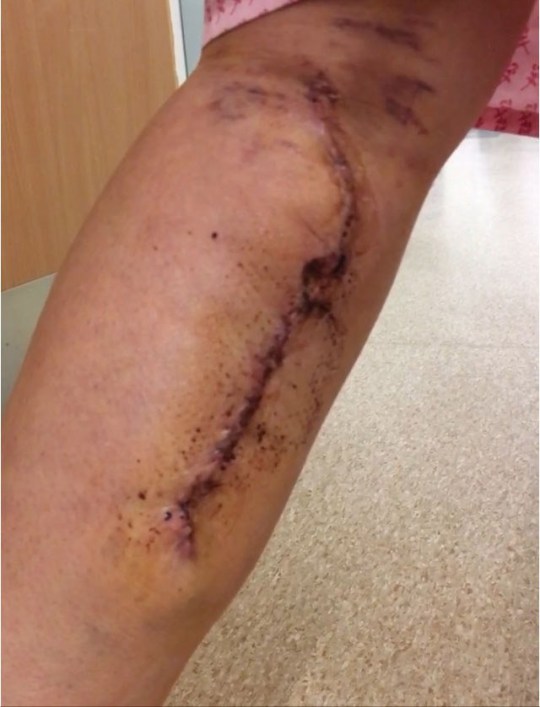 The scar on her leg (Picture: Jam Press)

Although the operation was successful, she found recovery tough and sopent 30 hours in intensive care.

She said: ‘I couldn’t lift my head, move, talk, or swallow and I had copious amounts of dribble that just came out my mouth that I couldn’t control.

‘I couldn’t shut my mouth, I had massive swelling of my whole jaw and my head felt like it was about to fall off my neck.

While the operation was a success, the mum can no longer stick out her tongue, lick her lips, kiss, eat or swallow.

She has slowly been getting used to life with only half of her real tongue and feels lucky not to have lost her entire tongue.

‘Initially my tongue would tire very quickly; speaking, eating and swallowing would become hard, especially at the end of the day,’ Annabel said.

‘Even now, if I talk too quickly, words still come out a little different and there is no way I could lick ice cream.

‘Another really weird thing is that because it came from my leg it actually does have hair on it.

‘My only sadness is that I can’t kiss properly. It’s surprising how important this is.’

Annabel is now a qualified life coach and Neurolinguistics Practitioner – she hopes her journey will help others who are going through a tough time.

She is also writing a fictional book about her divorce, which she will be self-publishing this year.