A MUM was left in agony suffering the “worst two weeks of her life” after having her Covid vaccine.

Leah King broke out in a nasty skin rash just weeks after having her jab. 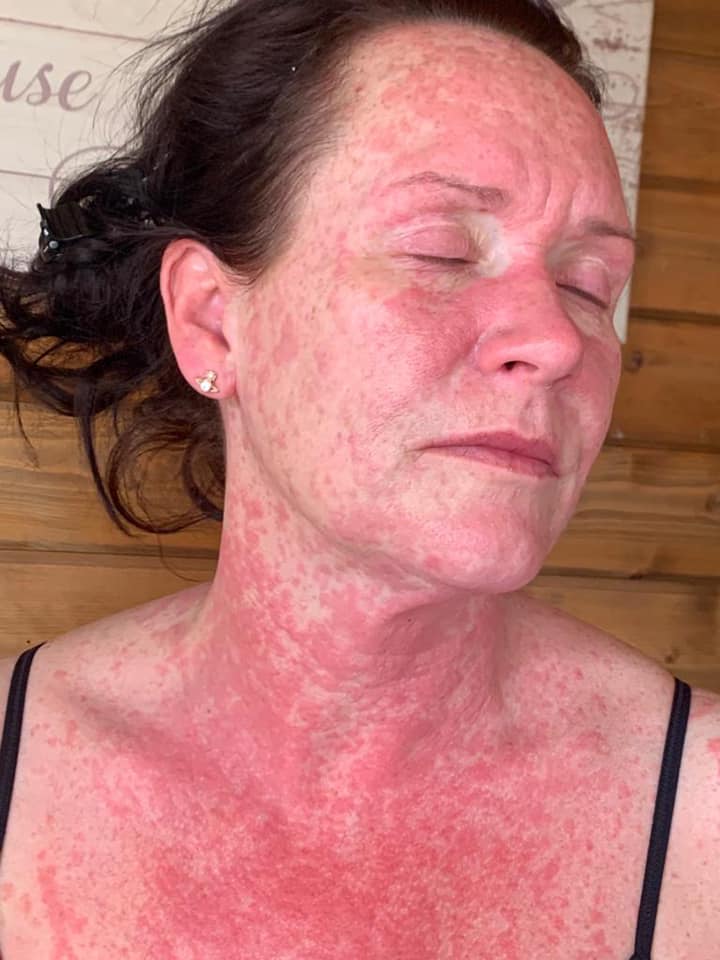 Leigh King has suffered a skin rash that burns after having the Covid AstraZeneca vaccineCredit: Media Scotland

She had her first dose of the Oxford-AstraZeneca vaccine on March 12 but said she is still dealing with the pain of a rash.

The 41-year-old said her body broke out in a burning rash that spread across her face, chest and back of the arms.

The rash is so painful it has left Leigh struggling to look after her 13-year-old son Aidan, for whom she is an unpaid carer.

A rash or pain after the Covid vaccine are listed as potential side effects.

And along with other side effects, in many cases they are deemed a good sign that the body’s immune system has kicked into gear in reaction to the jab.

But, Leigh was left suffering a more severe case, which is more rare. Despite her ordeal, the mum stressed she is not against having the vaccine but called for more support for people who do suffer side effects.

Leigh, from Wishaw in North Lanarkshire, Scotland, said: “My skin was so sore and constantly hot. I have never felt pain like this it has been a horrible experience.

“I am a very healthy person and am not on any medication or anything like that. I am not even in a vulnerable category.

“I only got the vaccine as I am an unpaid carer for my son who has autism and mobility issues.

“I haven’t even been able to care for him since I got the vaccine as I am in such pain.”

Leigh was given the vaccine at the Ravenscraig vaccine centre and began to feel adverse side-effects almost immediately.

“It was a horrible feeling,” she said.

“Never in my life was I prepared for what I was about to experience.

“To say it’s been the worst time of my life is an absolute understatement.”

FABULOUS GP and Sun columnist, Dr Zoe Williams said like with any vaccine the Covid jab can cause some mild side effects.

Writing in her On Call column, she said: “It’s natural to worry about side effects, and as with any ­vaccine there may be some mild ones.

“Like with the flu jab, there have been reports of some people feeling tired, having a slight headache and sore, aching muscles afterwards.

“While you might feel a bit rubbish, it’s normal, lasts only a ­couple of days and is actually a good sign the jab is working.

“It doesn’t mean you are seriously infected, it means your immune system is kicking in and is primed to jump at the first sign of a Covid infection.

“The vaccine is not recommended for people who have previously had allergic reactions to any of the ingredients in the ­vaccine, but is deemed safe for the vast majority of people.” 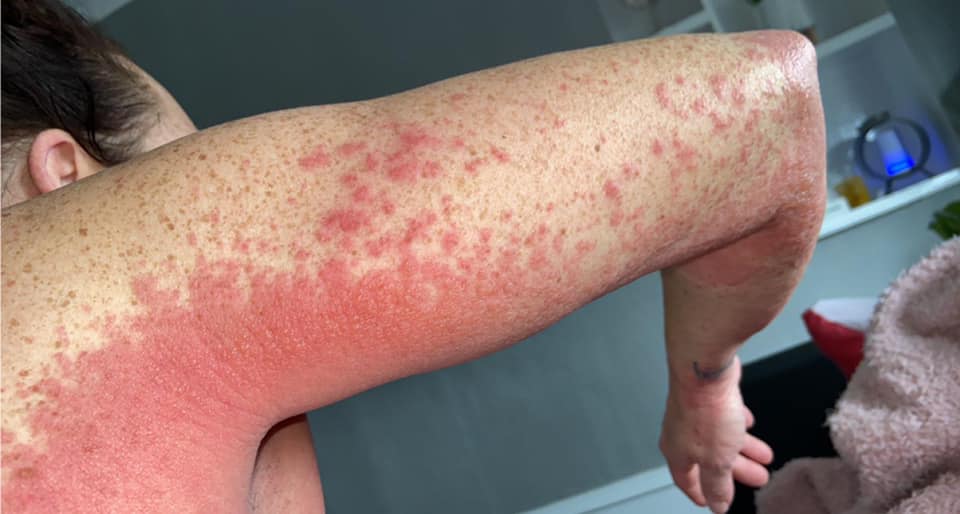 Leigh had her vaccine on March 12 and is still in pain from a rash two weeks laterCredit: Media Scotland

Side effects are not unexepected after a vaccine and generally mean the jab is doing its job.

More than one in ten people who have the AstraZeneca Covid vaccine will have tenderness, pain, warmth, itching or bruising where the injection is given.

They may also feel generally unwell, tired or sick.

Itchy skin or a rash is less common, affecting around one in 100 people, clinical trials showed.

This is because vaccines can trigger an inflammatory response which shows up in the skin.

For the Pfizer vaccine, which uses different technology, a skin rash could be a sign of an allergic reaction to the components of the jab, according to the Government website.

She claimed: “I went to Wishaw A&E but was turned away.

“I went back twice more and the last time I was in such pain I could barely walk out the hospital.”

Currently waiting to see a skin specialist, Leigh said the reaction to the vaccine has seriously impaired her ability to look after Aidan.

She said: “Aidan has also found this whole thing difficult.

“He is scared to come near me because of how my skin looks and he struggles to understand what is going on.

Leigh got the vaccine because she is an unpaid carer for her son, Aidan, who is 13Credit: Media Scotland

“At home is his happy place and I am his best pal, I got this vaccine to care for Aidan but I haven’t even been able to do that.

“This has just been such a tough situation, and has been so physically and mentally draining for the whole family.

“He is seeing a specialist in Glasgow soon and I won’t be able to be there for him. I can’t be there when he needs me most.”

Leigh stressed she is not against the vaccines – the life-saving jabs have been given to more than 30 million Brits so far.

But she feels as though there has been a lack of follow-up care in her case.

She said: “I feel so let down on every level. I’m now waiting to see a skin specialist as it’s been such an extreme reaction and also need an eye test as my eyes are so dry.

“I wish there was more support for people if this happens to them.”

An NHS spokesperson said: “We are unable to discuss individual patient care and would ask the patient to contact us directly to discuss their concerns.”

A general statement from the NHS says: “The vaccines approved for use in the UK have met strict standards of safety, quality and effectiveness set out by the independent Medicines and Healthcare products Regulatory Agency (MHRA).

“Any coronavirus vaccine that is approved must go through all the clinical trials and safety checks all other licensed medicines go through. The MHRA follows international standards of safety.

“Other vaccines are being developed. They will only be available on the NHS once they have been thoroughly tested to make sure they are safe and effective.

“So far, millions of people have been given a Covid-19 vaccine and reports of serious side effects, such as allergic reactions, have been very rare. No long-term complications have been reported.”

Oxford’s Covid vaccine is effective in all adults including over-65s, say WHO