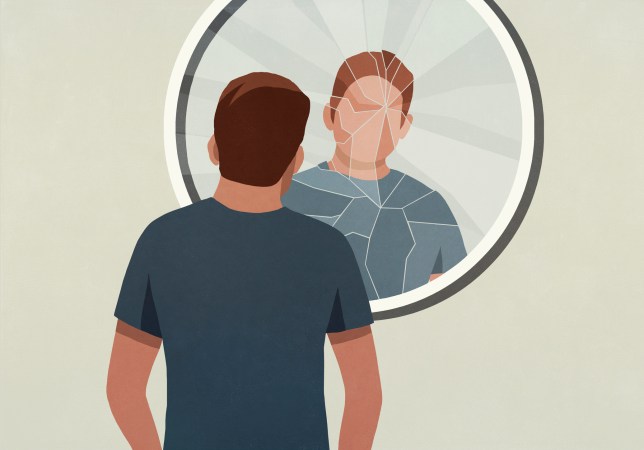 The study says they do so to ‘prove’ their manliness (Picture: Getty Images/fStop)

‘Fragile masculinity refers to anxiety felt by men who believe they are falling short of cultural standards of manhood.’

Not only does this affect the mental health of men who aren’t secure in their masculinity, this piece of research states that it may also make men act out aggressively towards others.

Two studies by Duke University researchers looked at 195 students and a random group of 391 men aged 18 to 56, respectively, for their views on ‘manliness’,

This work found that younger men who derive their sense of masculinity from others’ opinions were more likely to show hostile behaviour, saying, the ‘more social pressure a man feels to be masculine, the more aggressive he may be.’

‘When those [insecure] men feel they are not living up to strict gender norms, they may feel the need to act aggressively to prove their manhood – to “be a man”.’

The studies worked by initially asking men questions on stereotypically male topics like DIY or cars, as well as how they behaved in certain situations like dates.

They were then randomly told that their scores were higher or lower, with low scorers even being told they were ‘less manly than the average man.’

Participants were then asked to take part in a word association game to judge their mood based on their automatic answers.

The men who derived their sense of masculinity from within weren’t bothered by their low scores or ‘less manly’ descriptions, while those worried about outside opinions on their ‘manliness’ were more likely to associate violent words.

For example, if they were shown the letters ‘ki’, they might say ‘kill’ over ‘kiss’ or say ‘blood’ for ‘blo’ rather than ‘bloom’ or ‘blow’.

Further proving the theory, some of the men given low scores in the study actually threatened researchers.

Men in the 18 to 29 age group were most likely to show these signs of aggression, with the response becoming calmer with age.

They study also looked at the same response when women were asked about their femininity, but did not find that participants were negatively effected.

‘Some of them are trying to prove their own manhood by being aggressive. It’s in everyone’s interest to understand this phenomenon better.’

Who was Scottish DJ Sophie Xeon and how did the musician die?