MORE data has suggested Covid cases have been declining over January since England was plunged into lockdown.

But it adds to confusion over whether the country is reaping benefits from the tough restrictions – after scientists claimed today they were not working to bring infections down.

The interactive map above, which can be viewed in this link here, is based on Public Health England’s weekly Flu and Covid-19 report.

It can be assumed the people who got a positive test result in that week would have been infected several days prior, given that it takes five days on average for symptoms to appear, and one or two days for test results to be processed.

The data reveals positive test results were falling drastically across England when compared to “week 1” – January 2 to 10.

Numbers were down in every area other than five, which are Barnsley, Leicester, Plymouth, Shropshire and Solihull.

Cases grew by no more than six per cent in each of these places, meaning there were no significant hikes anywhere in England. 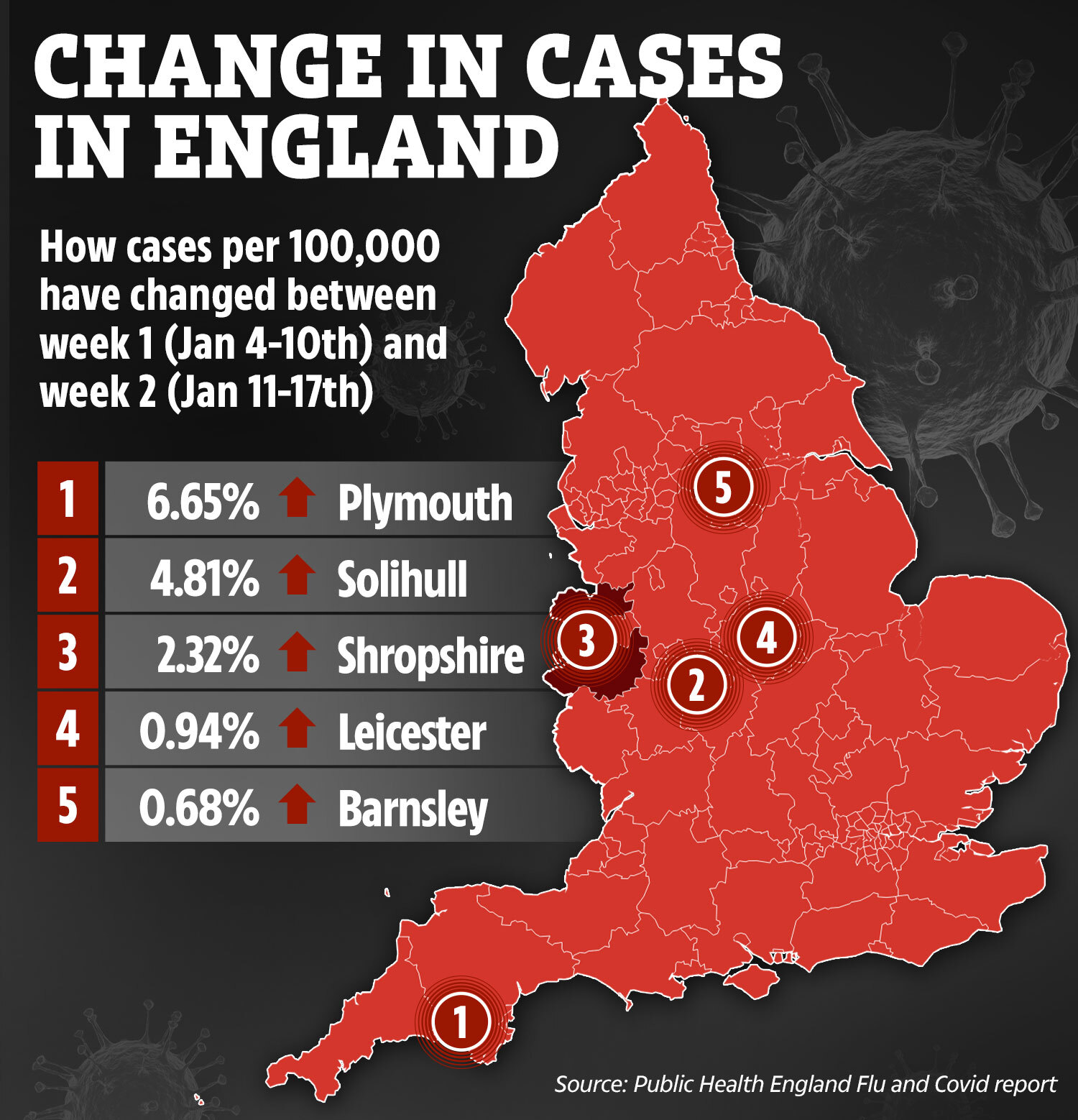 Meanwhile, the largest decreases in cases were recorded in Brighton and Hove, Barking and Dagenham, Bexley and Isle of Wight.

Looking at regional data, London saw the biggest drop in cases of 27 per cent, followed by the East (24 per cent) and South East (22 per cent) – which were the first areas to go into Tier 4 before the lockdown.

There was no region that saw an increase in cases in the seven days to January 17.

The report suggests that there were fewer people exposed to – or catching – the coronavirus in the first week of January.

‘No evidence for declining cases’

However, this largely contradicts the results of a shocking government-funded study led by Imperial College London, published last night, that went as far as claiming lockdown was not working.

The REACT study swabbed 143,000 people for coronavirus in the community in the ten days January 6 to 15.

Researchers then extrapolate the findings to say how many people had the virus in that week.

Because the study swabbed random people, it picked up asymptomatic cases as well as those who had symptoms – unlike PHE data which is only people who have symptoms and come forward for a test.

The findings revealed that Covid cases “were not dropping in the first 10 days of lockdown”, which started on January 5. 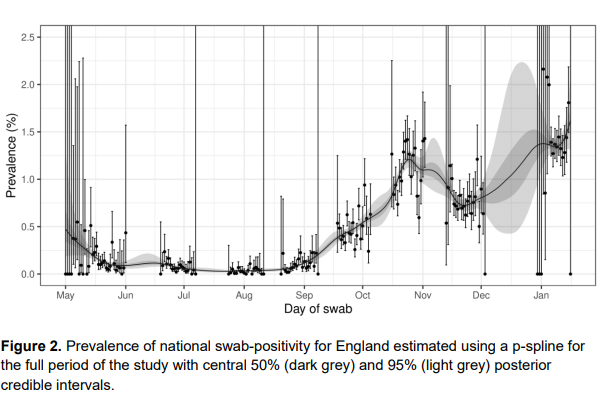 Imperial College London findings revealed that Covid cases “were not dropping in the first 10 days of lockdown”, which started on January 5

A record 1.58 per cent of participants had the coronavirus in that time period, and there was “no evidence of decline” in infections.

It pours cold water on PHE’s data which only looks at people with symptoms – who only account for around two-thirds of Covid cases.

Similarly, Department of Health data, on the Government coronavirus dashboard, suggests positive Covid cases have been declining since early January.

Kevin McConway, emeritus professor of applied statistics, The Open University, said there are “sometimes issues” with using confirmed cases to measure the crisis.

However, for REACT a representative sample of the community population in England is tested for current infection, regardless of whether they have symptoms.

But there were some holes in the theory that cases have not declined – and Prof McConway said there is still “a strong possibility the REACT estimates are not very accurate”.

The research team compared the swabs from January to late November, reporting cases had jumped up by 74 per cent between the two time periods.

But the researchers acknowledged they missed a whole months’ worth of infections between the two swabbing rounds, which would have shown a “peak” in December.

Had they done this, it may have shown that although cases were higher in January than in November, they were declining compared to December.

Professor Paul Elliot, who is leading the REACT study, suggested the current measures crippling the lives of everyone may not be strict enough to curb infections.

He told BBC Radio 4’s Today programme: “We’re in a position where the levels are high and are not falling now within the period of this current lockdown.” 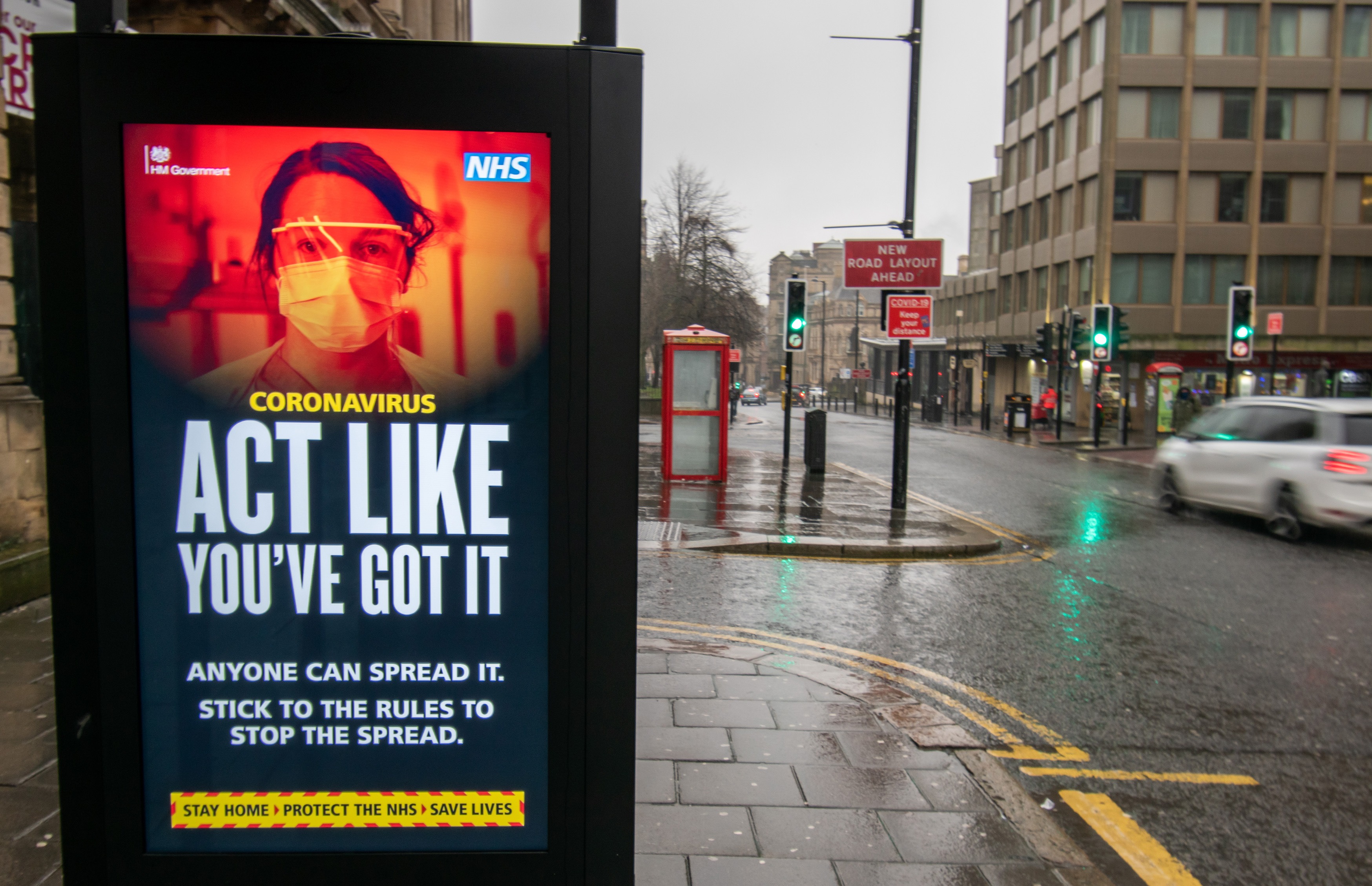 “We’re seeing this levelling off, it’s not going up, but we’re not seeing the decline that we really need to see given the pressure on the NHS from the current very high levels of the virus in the population.”

Prof Elliot said the current R rate – which represents how many people an infected person will pass the virus on to – was “around 1”.

The Government’s official estimate for the R rate is 1.2 to 1.3. It must be below 1 in order for the outbreak to shrink.

The Government said the REACT study does not yet take full account of the current lockdown measures, which have only been in place for two weeks.

“It’s long enough that, were the lockdown working effectively, we would certainly have hoped to have seen a decline,” he said.

Scientists have previously said the effects of lockdown are not seen until two or three weeks after it is implemented.

The people who were exposed to the virus in the first few days of January – and perhaps before Christmas – would still be coming forward for testing in mid-January, due to the delay in symptoms appearing.

And, some experts say driving people into their homes can cause infections to spike.

Daivd Strain, a clinical lecturer at the University of Exeter, told The Sun: “In London where there a much more smaller households, lockdown put people into their homes, allowed those with Covid for it to develop and be admitted [to hospital] and those without it to stay safe at home.

In other parts of the country, the numbers of new cases peaked last weekend, Dr Strain said, due to “bigger family units, less restrictions pre lockdown and later arrival of the new variant”.

The REACT study also looked at mobility data from participants’ Facebook, which gives an idea of how much people are travelling around.

Prof McConway said: “Perhaps people really were staying at home more over the Christmas and New Year break, despite the fears about too much travel and family meetings that could increase infection, and perhaps mobility increased again at the start of the year as people went back to work after the holidays.”