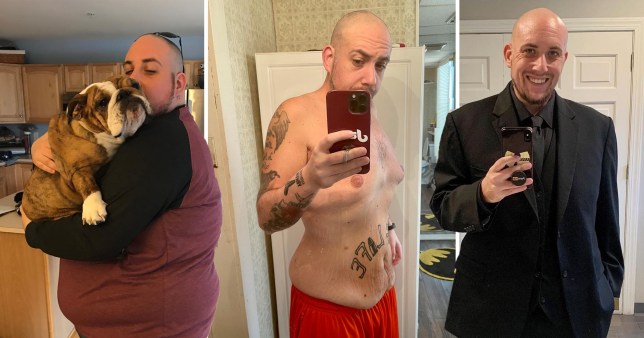 Matt before and after his huge weight loss (Picture: MDWfeatures/@mattyamazing)

Matt Fekelman, a 33-year-old account development manager from Pennsylvania, US, realised the extent of his obesity when he was unable to wipe himself in the bathroom.

He struggled with his weight since childhood, and after losing both of his parents, weighed 140 pounds at seven years of age.

Matt’s weight spiralled out of control after he suffered an accident where he dislocated and shattered his ankle socket in 2009.

His injuries meant he had to undergo two surgeries to fit a plate, two rods, and eight screws – leaving him using a wheelchair for nine months and then walking with a cast for another six months after.

When Matt’s ankle healed, he had limited movement in his foot, was in constant pain, and walked with a limp. He sank into a deep depression and turned to food for comfort, consuming up to 5,000 calories a day.

His excessive eating combined with his lack of mobility led him to weighing 350 pounds.

Matt was convinced that he would die in his mid-30s because of his obesity.

But he was able to find the motivation to change it all around and has lost an impressive 150 pounds, now weighing 205lbs. 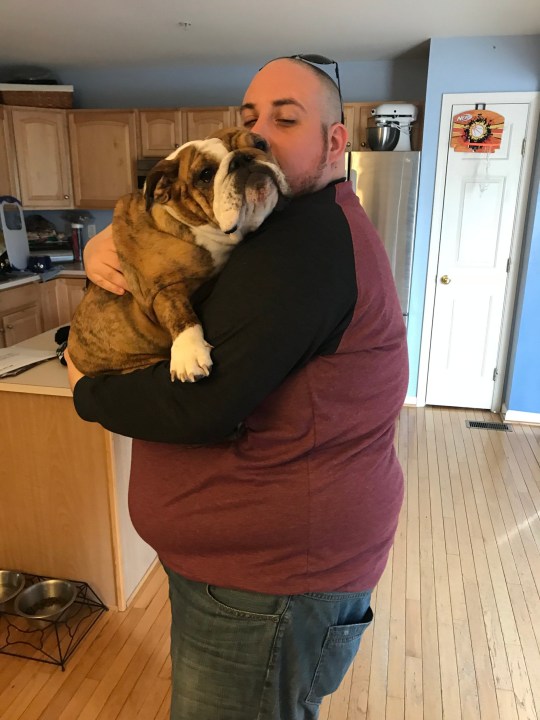 Matt credits his dog Sophie for motivating him to turn his life around (Picture: MDWfeatures/@mattyamazing)

‘I could only use the bathroom in my own house because I would have to jump into the shower after to make sure I could properly clean myself, which made traveling or extended hangouts very difficult,’ Matt explained.

‘I went to the doctor for the first time in about eight years to get a check-up in February 2019. I was shocked to find out how much I weighed.

‘I knew I was big but seeing the number on the scale shocked me.’

Matt’s life changed for the better when he adopted a dog, Sophie, on his 30th birthday. She helped with his depression and inspired him to start his weight loss journey because he wanted to make sure he’d be around to take care of her.

Matt started by making simple changes, such as tracking his food intake on the MyFitnessPal app and wearing a Fitbit to count his daily steps. He would go to the gym five days a week to walk on the treadmill for 30 minutes.

He said: ‘I honestly didn’t think I would be able to stay committed. I initially didn’t set any weight loss goals because I was expecting to fail.

‘After I lost 25 pounds in my first month, it flipped a switch, and I became super disciplined and committed and started setting goals and constantly making new ones as I hit the goals I set.

‘I wanted to lose 100 pounds in a year and I ended up doing it in eight months. I ended up losing 150 by the one-year anniversary of my journey.’ 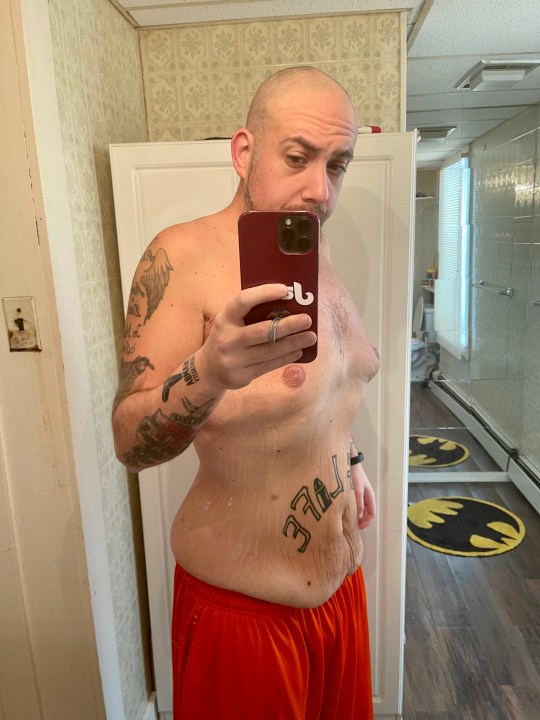 Matt’s ankle pain has completely disappeared, and he can now run on the treadmill.

While he is proud of his achievements, he has been left with excess loose skin that has led him to struggle with body dysmorphia.

‘When I see myself in pictures I think I look good but when I take my shirt off and look in the mirror I don’t feel skinny,’ he explained.

‘I used to think body dysmorphia was a myth or that only women were just being hard on themselves, but once it started happening to me, I understand what other people feel like. That no matter how many compliments you get, you’ll still see the imperfections.’

Matt’s family has set up a GoFundMe page to raise money for skin removal surgery to complete his weight loss journey.

Before his weight loss journey, Matt didn’t exercise and would skip breakfast in favour of a coffee or a donut. For lunch, he would have a large sandwich with crisps, beef jerky, and a chocolate bar washed down with a bottle of soda. Dinner would often be a fast food meal from KFC, Taco Bell, or his local pizza shop.

Now Matt has a protein shake and a granola bar in the morning; tuna, cheese, pepperoni, and almonds for lunch; and boneless skinless chicken thighs, beans, and Brussels sprouts for dinner – totaling around 1,600 to 2,000 calories.

He runs six miles a day, six times a week, and makes sure he gets more than 20,000 steps every day. 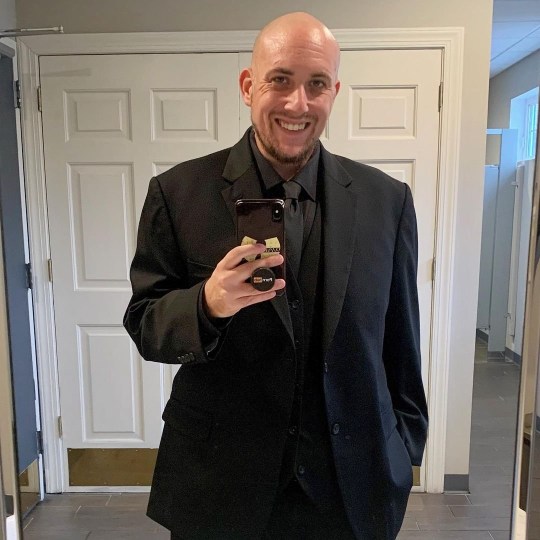 Matt said his life has changed for the better, and he hopes that by sharing his story he will be able to inspire others who struggle with their weight.

He added: ‘I am genuinely happy, people can tell my smile is different. I have such a ‘glass half full’ approach to everything now. But the biggest health benefits are that I no longer live in pain. I don’t walk with a limp.

‘I can finally run again after a decade of not being able to. I don’t have acid reflux or heartburn anymore. I no longer have high blood pressure. I feel like I can live a full and happy life now. I feel like a brand-new person.’