Our drinking habits have changed over the past two years (Picture: Getty Images/iStockphoto)

With little else to do in lockdown, lots of people looked forward to an evening drink – whether they were working or on furlough.

Some followed in the footsteps of Stanley Tucci and created a daily cocktail hour, while others settled down every night with a large glass of vino.

While our drinking habits changed significantly during lockdown, it seems the amount of alcohol consumed didn’t increase throughout 2020 – according to new research.

A new study has found there was no statistical difference in the total number of alcohol units consumed each week, during different periods of the first year of the pandemic.

However, researchers found that lockdowns were linked to a shift in habits to at-home, late evening drinking.

In Scotland there was also an increase in solitary drinking – although researchers say this could be down to more people living alone there, compared to England. 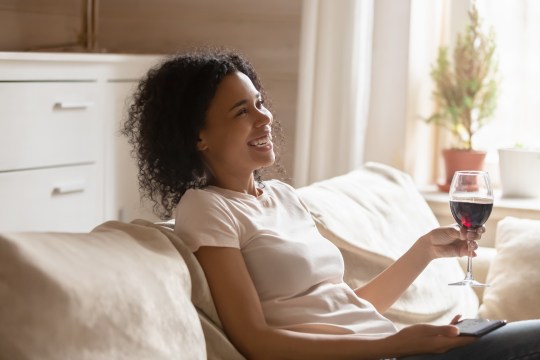 Experts say an increase in home drinking is a concern (Picture: Getty)

Overall, results showed that consumption of shop-bought alcohol increased following the March 2020 lockdown and remained higher than previous years throughout the rest of that year – even in the period when restrictions were eased.

Lead author of the study Dr Iain Hardie says that, going forward, it remains unclear what the long-term consequences will be of the changes in alcohol consumption in 2020.

But he notes that the increase in home drinking is a concern.

Dr Iain explains: ‘We know from other studies that alcohol-related harm has risen during the pandemic. The increase in home drinking is likely to have contributed to this.

‘In the past, home drinking has been a relatively under-researched topic, and there is now a need to monitor it more going forward to find out whether these home drinking habits picked up by people in 2020 become a new norm within people’s drinking behaviour.’

Co-author of the study, Dr Abigail Stevely, adds that – despite some concerns that people might drink more in the daytime – the team actually found that there was a shift to people drinking later in the evening, during lockdown restrictions.

‘This perhaps reflects changes in people’s routines and the absence of opportunities for daytime socialising such as going to the pub with colleagues after work,’ she says.

‘Although we found that lockdown restrictions did not change overall levels of alcohol consumption, there is evidence from other studies that heavier drinkers may have increased their consumption.’

Dr Abigail adds that it will be important to continue to monitor drinking during the pandemic, to prevent additional health problems in future.