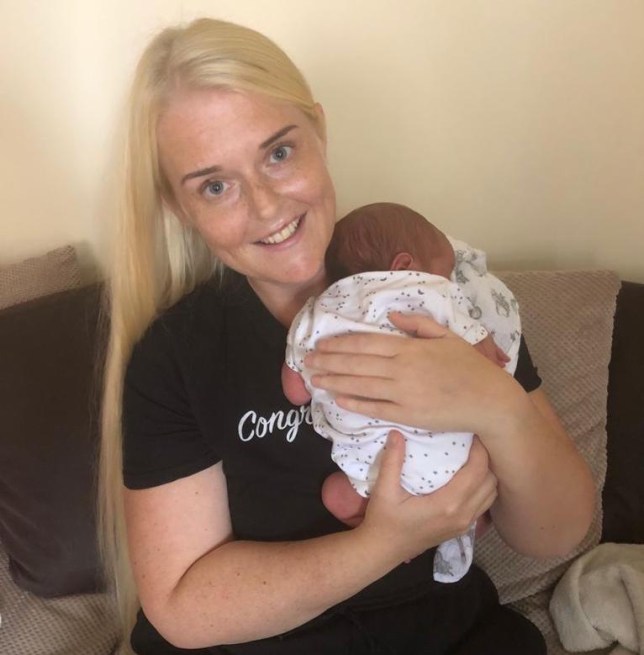 My five nieces and nephews are my world (Picture: Destiny Wade/Medavia)

When I had abnormal bleeding after sex with my then-partner in February 2020, I wasn’t too worried.

I thought if anything were to be wrong, it would be picked up in my cervical screening, which was booked for the following month.

I’d had the HPV vaccine when I was 14 but knew I still needed to be screened every three years from the age of 25.

But when lockdown hit, I was informed by the GP receptionist that ‘all routine appointments’ were cancelled.

I queried why a cervical screening classed as ‘routine’ and explained that I had been having abnormal bleeding.

Two days later I got a call back from the practice nurse – no in person appointments were being booked for examination purposes – and, at 27, she told me I was ‘low risk’ for cervical cancer.

She went on to suggest that the bleeding was likely related to stress or a popped cyst. I was told I could have my cervical smear in three to four months but to tell them if symptoms persisted.

At first I was reassured, I was still going to work as a paediatric oncology nurse – working to help really sick kids had always been my life goal – and with the outside world in lockdown it was an exceptionally stressful time.

I was young, fit – I’ve enjoyed bodybuilding for years – I work with cancer patients and keeping healthy has always been important to me. 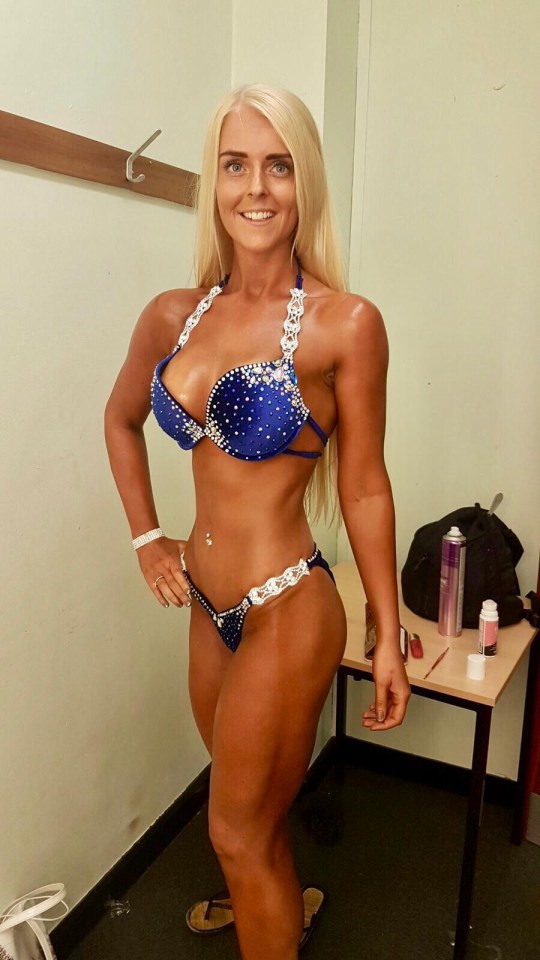 If you have symptoms, insist on being seen. If your smear test is cancelled, chase it up and rearrange no matter what (Picture: Destiny Wade)

Then, I contracted Covid-19 and had to isolate through April.

For several months, I had no appetite and felt really sick with swollen glands; my bloods were taken and I was told I was most likely suffering with a post-Covid virus and they gave me antibiotics.

All the while the abnormal bleeding continued – coupled with strong-smelling discharge – and I told my GP this repeatedly.

I started to question whether my partner had been cheating on me, while he was suspicious about me – we both had no reason to be but I was convinced it had to be an STI because cervical cancer risk was so low for someone my age.

I requested an at home STI kit and got a negative result but the GP still gave me more antibiotics.

By early June, I had a heavy bleed between periods and I passed a dark black piece of matter the size of my thumbnail – it didn’t look like a blood clot.

I’m an oncology nurse; I’d seen a similar substance on a patient’s tumour.

Feeling sick with worry, at 9pm I instantly took myself to A&E, yet I still felt silly troubling the emergency ward during the pandemic but I hadn’t got anywhere with my GP.

Examining me, the doctor took one look and frowned before asking if I’d ever been pregnant. I never had – I was on the pill – but starting a family one day was my plan once I’d settled down and established my career.

The doctor said they couldn’t take a biopsy there and then – worried I’d bleed too much – and referred me to see a specialist the following week.

I left the hospital at 11pm, totally alone, shaking and sobbing as I called my mum, Karen.

‘I think I’ve got cancer,’ I told her, tears streaming, but nothing could have prepared me for the diagnosis.

After numerous scans and biopsies being taken, three weeks later they confirmed I had Stage 2B cervical cancer.

I didn’t know how to react, feeling numb as they told me the tennis ball-sized tumour was aggressive; they had to act quickly. 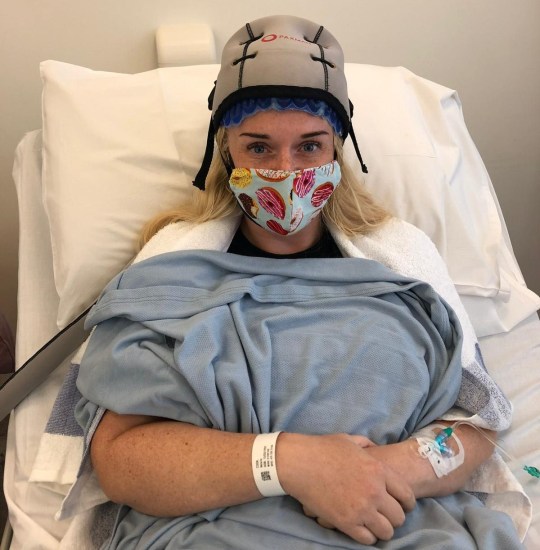 Treatment was gruelling but you’ll do anything to stay alive (Picture: Destiny Wade/Medavia)

I was told there was no time to freeze my eggs but they could try an ovarian transposition, a procedure to pin my ovaries up into my ribcage to protect them from the gruelling radiation treatment, so I clung onto hope.

I would need a surrogate but there was still a chance I could have my own baby one day.

My partner and I split, the pressure was just too much but I had to focus on survival.

My mum, sister and all my family supported me – Mum even moved in to care for me while I had a combination of chemo and radiotherapy to blast the tumour.

Treatment was gruelling but you’ll do anything to stay alive – I was finally given the all-clear in December 2020.

It was a bittersweet moment because I found out the ovarian transposition hadn’t worked and my ovaries had shrunk.

I was alive but I was going through the menopause at just 27; I would never be a mum.

I was heartbroken and angry. If I’d had my smear test when I was supposed to in March, or if my GP had agreed to see me in person, it would have been picked up sooner and I’d have had more time to freeze my eggs.

Instead, I’m grieving the child I always longed for as well as going through the physical symptoms of menopause.

I’ve had the mood swings and brain fog and although I’ve not had the hot flushes and night sweats they may come in the next year and my sex drive is at zero.

I’m left with scar tissue from the radiation that means I need to use a vaginal dialator to try to break down the scarring – sex for me would be impossible right now.

So, I’m grateful I’m single at the moment but knowing new relationships I enter will need to start with an honest discussion about my inability to have children destroys me.

When I see pregnancy announcements on social media or babies in prams I feel jealous and utterly devastated.

I work with children every day and it’s very hard – it feels like my future’s been stolen.

Focusing on positives, my five nieces and nephews are my world – they’ve told me they’re here to love me no matter what, which is really sweet.

But of course it’s not the same and I don’t feel like I’ll ever get over it. Even if I were to adopt I have to prove I’ve been cancer free for five years before they’d process my application so there’s a long road ahead.

One day, I hope to have a family – it’ll just happen in a different way to the one I imagined.

For now, I want to raise awareness so other women don’t go through this.

Following Matt Hancock’s recent mistaken announcement wrongly describing the human papillomavirus (HPV) at home testing kits as ‘smear tests’, I want to stress how important it is that we educate our children about cervical cancer – girls and boys – and what they need to look out for.

If you have symptoms, insist on being seen. If your smear test is cancelled, chase it up and rearrange no matter what. I believe you are safer from Covid-19 in a medical setting than you are going around a supermarket – don’t put off your appointment.

I’m worried because a recent survey by Jo’s Trust showed 45% of women had not visited a medical setting during lockdown and 31% needed an appointment and did not make one in person.

The pandemic should not have been an excuse for the GP to brush off my symptoms.

Yes, I was young and my first screening at 25 was clear – to go from normal to stage 2B should take five to 10 years but sadly I was one of the unlucky few who doesn’t fit the statistics.

The highest risk age group is 30-34 years old – don’t think because you’re young you are safe. I’d had the HPV vaccine and know that having that jab doesn’t mean you don’t need to prioritise your smear.

Don’t slip through the net. I did, despite asking for my smear test, and now I’ll have to live with the consequences.