MORE Kill the Bill protests are planned over Easter, sparking fears of further chaos as dozens of thugs were arrested after police were attacked over the weekend.

Demonstrators are being urged to attend rallies on Saturday during the first weekend after stay at home Covid lockdown restrictions end. 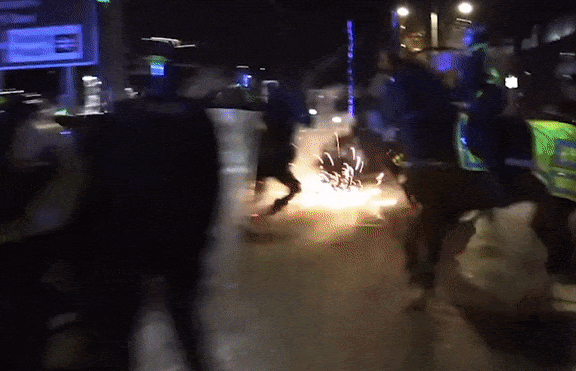 Fireworks were sent flying at police in Bristol as cops arrested 10 protestersCredit: NewsFlare 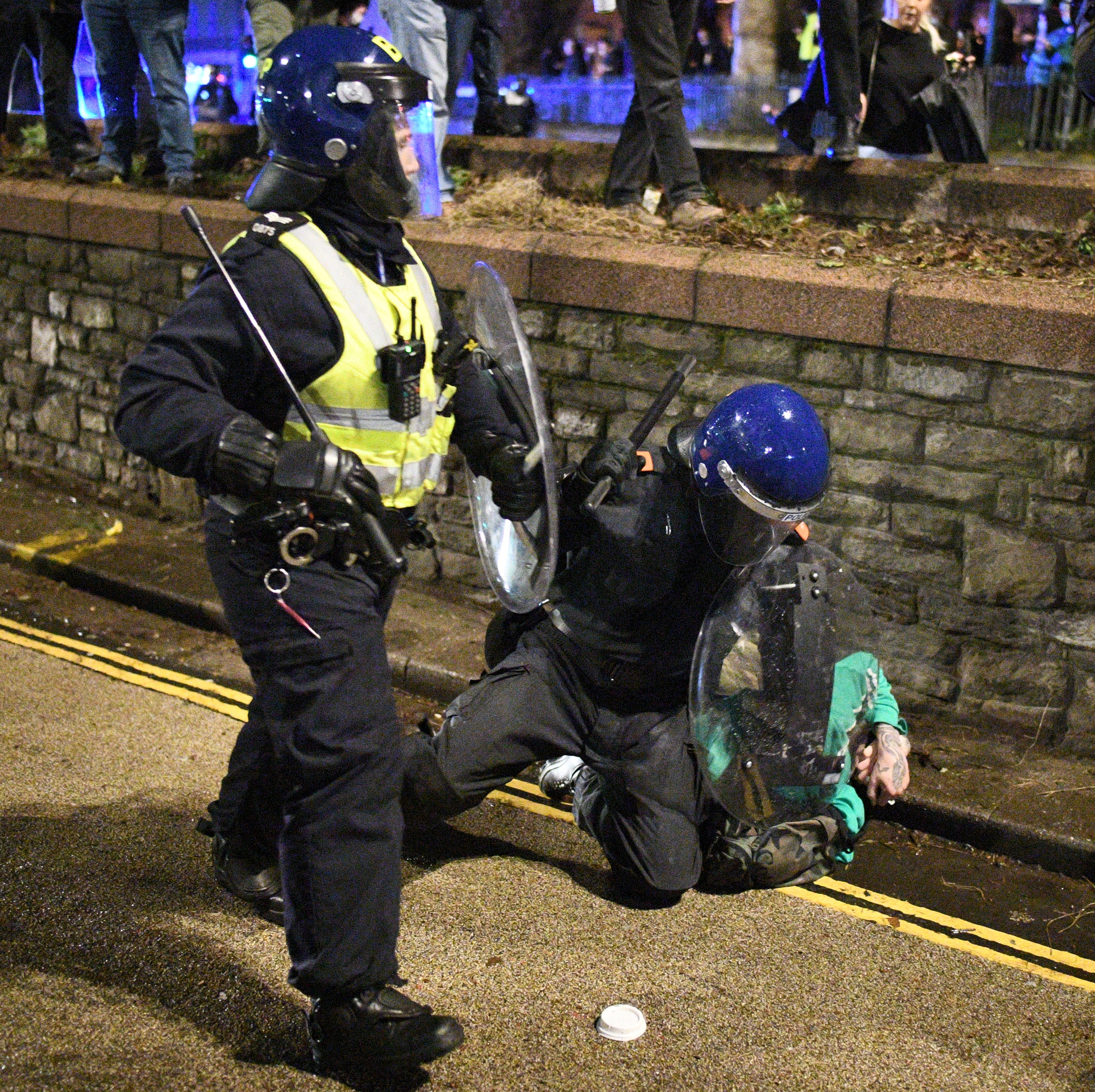 A riot cop holds down a demonstrator during a ‘Kill the Bill’ protestCredit: Getty 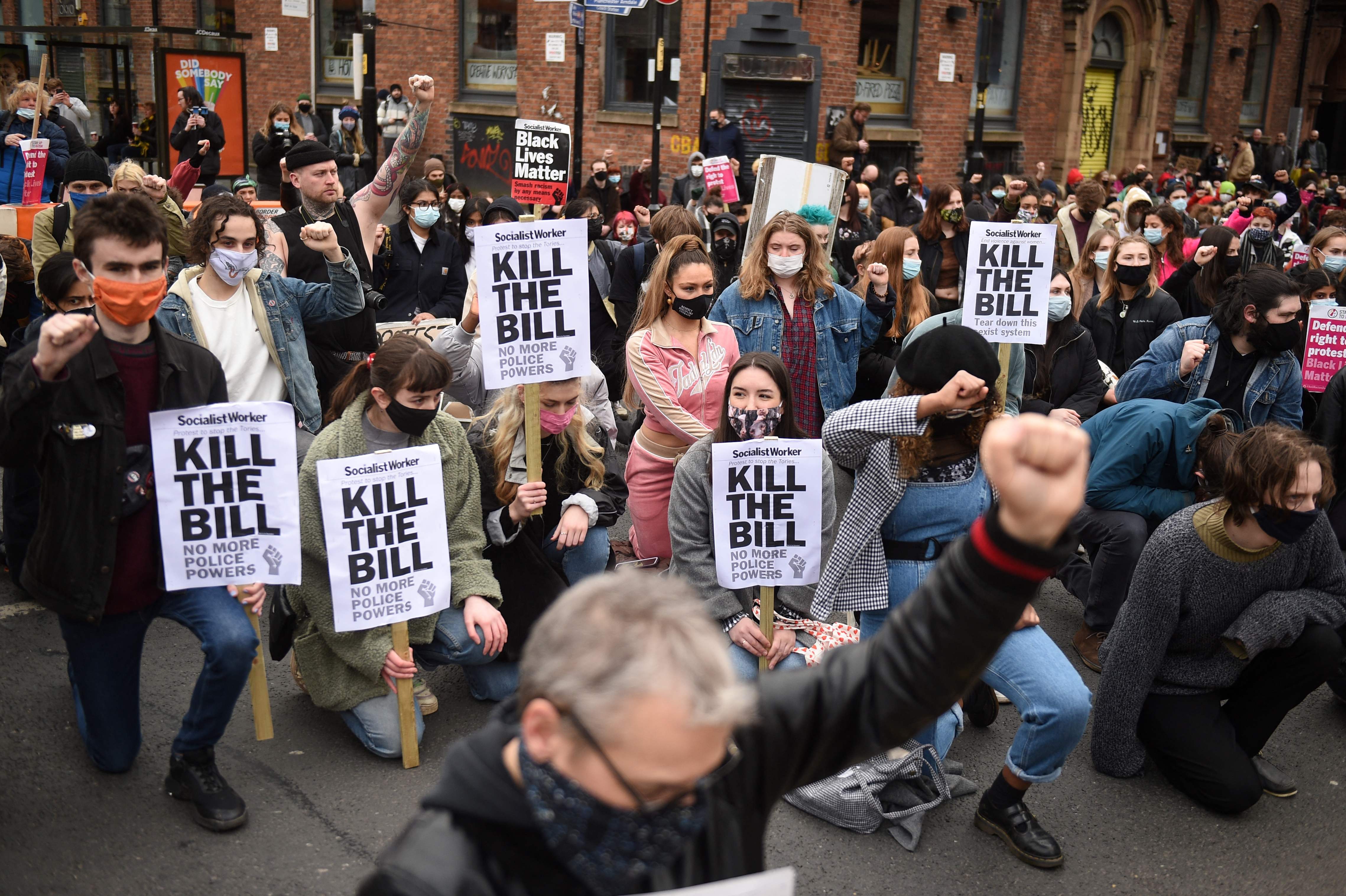 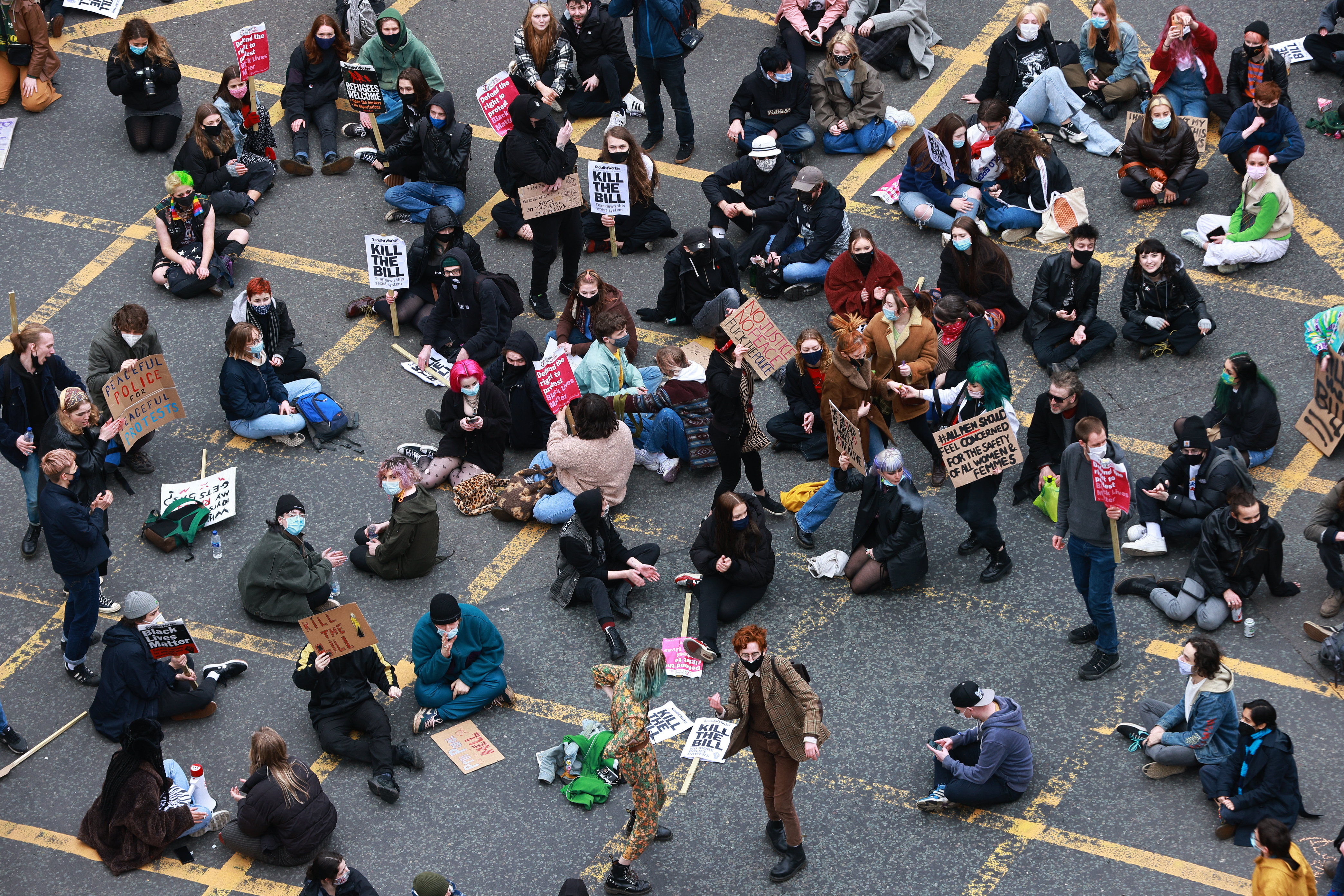 The protests have been sparked after a new policing bill which would see protests criminalised when deemed a “public nuisance”.

Rallies are due to take place in London, Plymouth and Bourmemouth over the bank holiday weekend, with sunny weather expected.

Eighteen people were arrested in Manchester at one demonstration yesterday.

Riot cops used shields to push back thousands of booing demonstrators who threw the fireworks along with bottles and eggs at police on the third night of chaos in less than a week.

The chaotic scenes saw a number of arrests overnight as the protesters and more than 100 cops armed with shields and helmets faced off in the streets.

One of the detained rioters was issued with a fixed penalty notice while the other nine remain in custody, cops said yesterday.

Mr Johnson called the attacks against officers “disgraceful” and gave the police his “full support.” 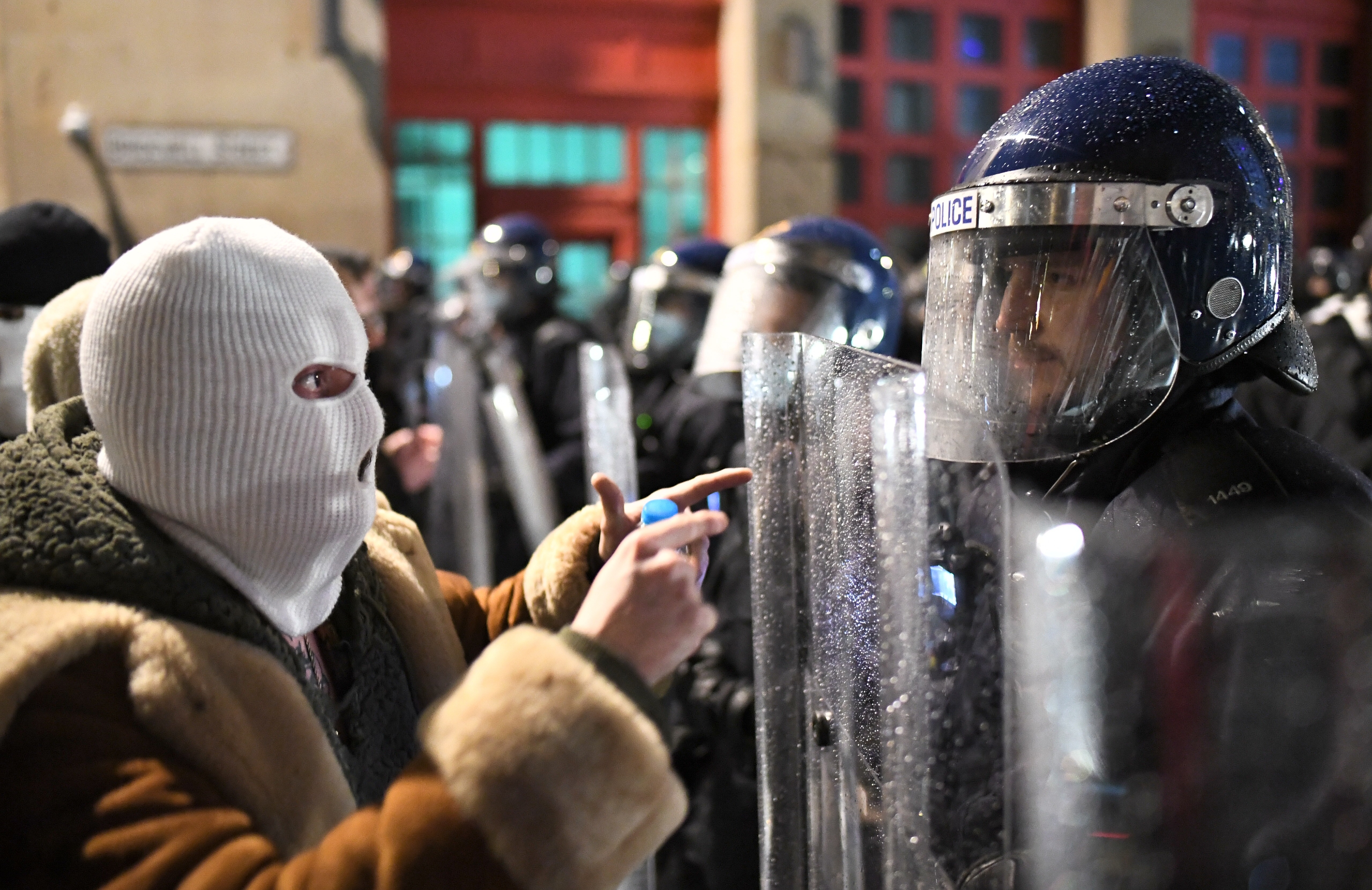 It’s the third night in a week that protesters took to the streets of Bristol for ‘Kill the Bill’ demonstrationsCredit: Getty 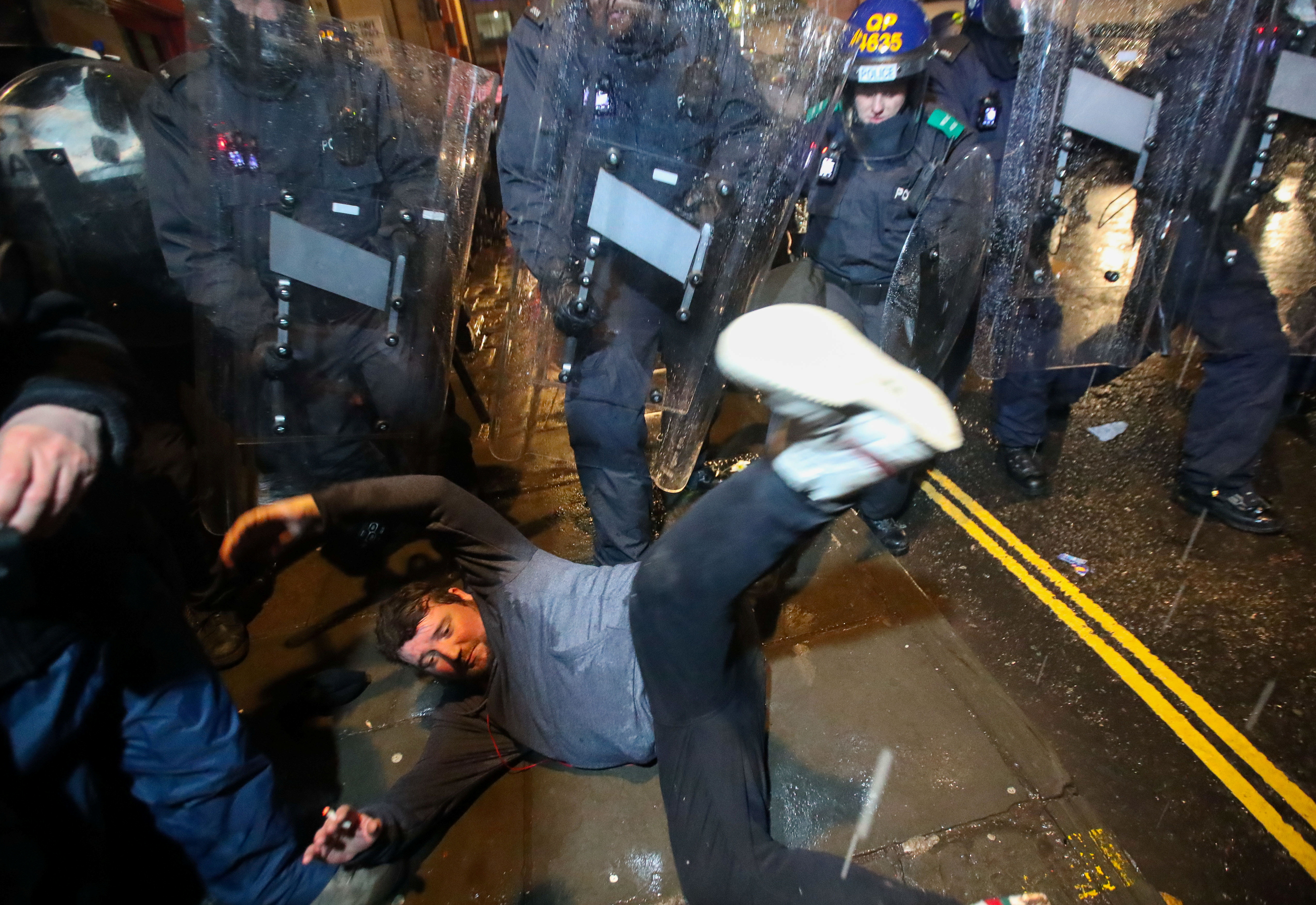 A demonstrator falls during a clash with police officers at a protest against a newly proposed policing billCredit: Reuters 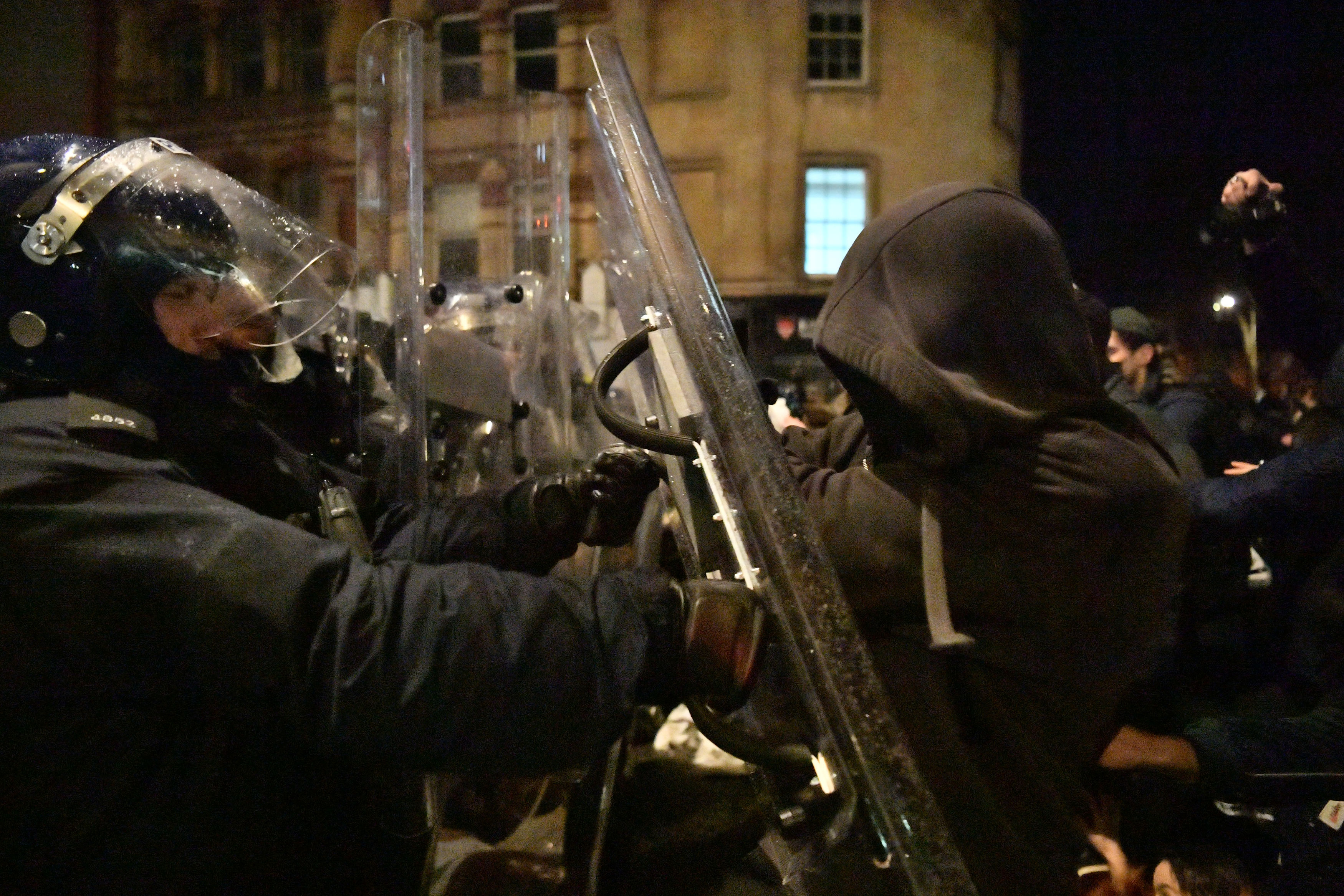 Police officers move in on demonstrators in Bridewell StreetCredit: PA

“Our officers should not have to face having bricks, bottles and fireworks being thrown at them by a mob intent on violence and causing damage to property.

“The police and the city have my full support.”

Home Secretary today shamed the ‘troublesome’ demonstrators, saying: “I am disgusted by the disorder in Bristol and the violence being directed towards the police.

“I’m in no doubt the silent, law-abiding majority will be appalled by the actions of this criminal minority.

“Despite repeated warnings to disperse, it’s clear these thugs were only intent on causing trouble. I am receiving regular updates and the police have my full support.”

In Manchester, dozens of sit-down proteseters blocked Portland Street in the city centre in a “largely peaceful” demonstration, police said.

Other Kill the Bill rallies were held in London, Brighton and Bath.

Around 1,000 people had gathered in Bristol on Friday night after violence at two confrontations in the city in the week before.

Chaos kicked off quickly yet again with fireworks sent flying towards a police horse during the scuffles as cops tried to move on the protesters.

Video posted on social media appeared to show a journalist being pushed by police officers.

Avon and Somerset Police said projectiles including eggs and glass bottles were lobbed at cops during the protest.

Fireworks were thrown at police as they charged on horses throughout the cityCredit: Twitter 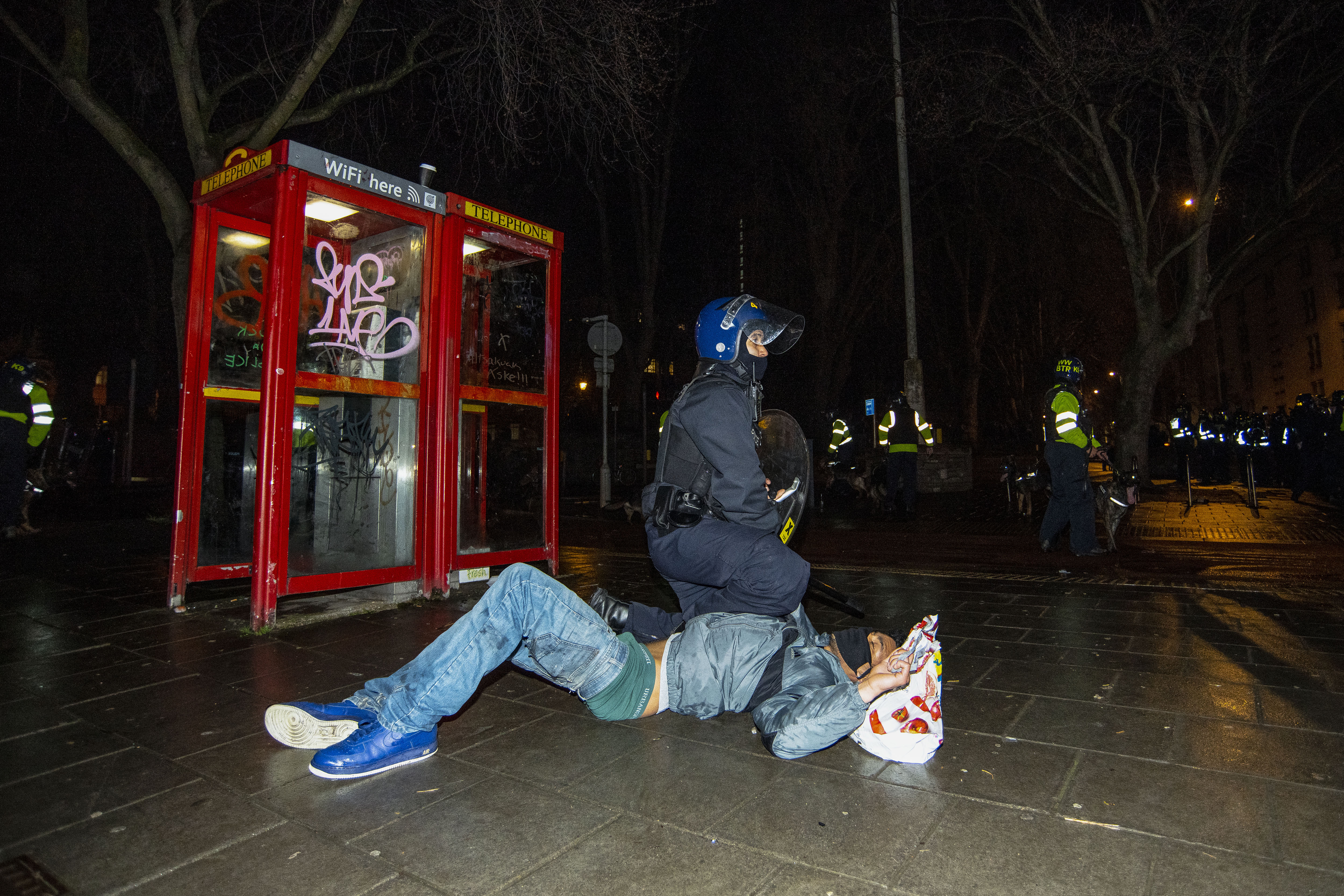 A protester is held down by a riot police officerCredit: ANDREW LLOYD 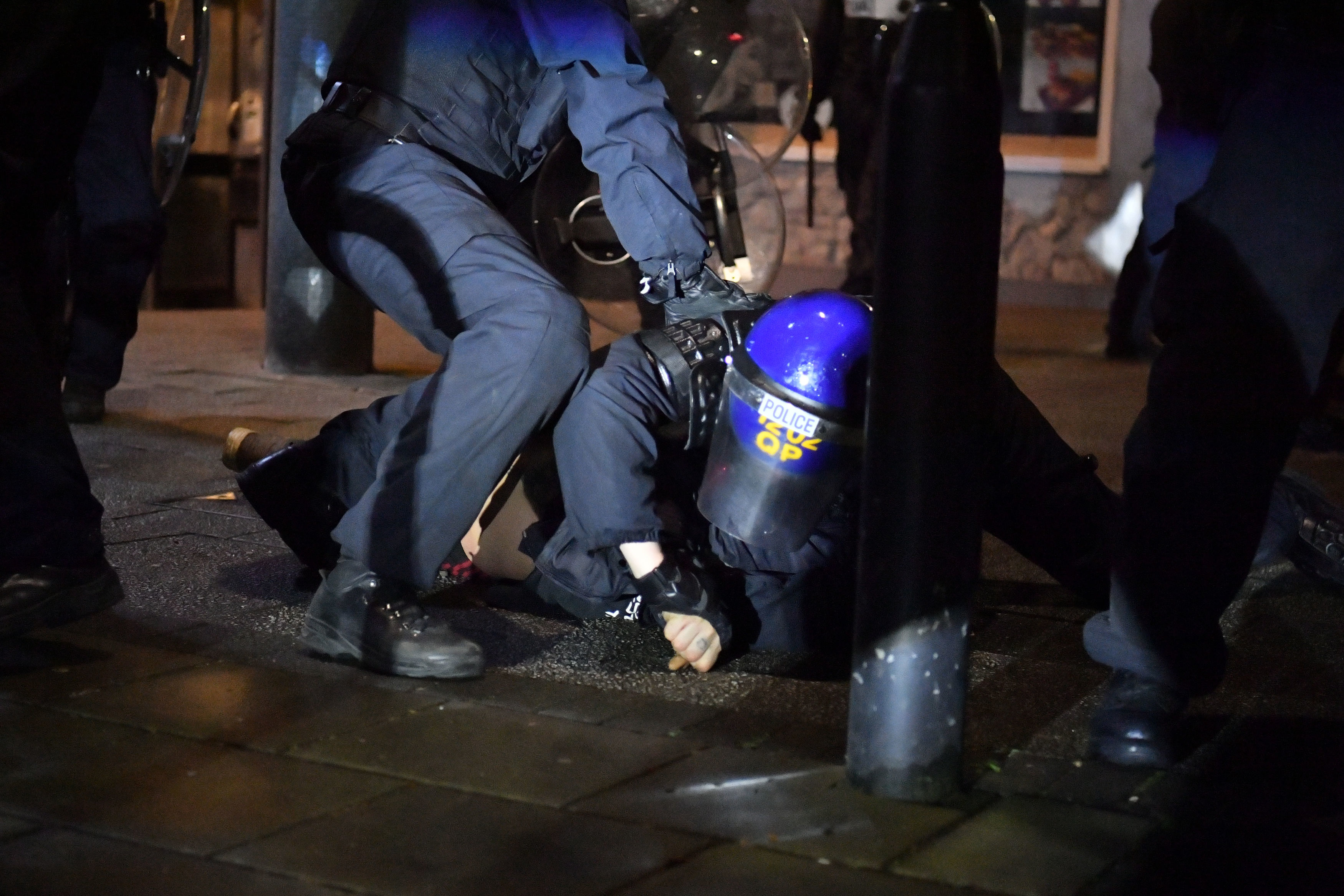 Police officers detain a man as they move in on demonstrators in BristolCredit: PA 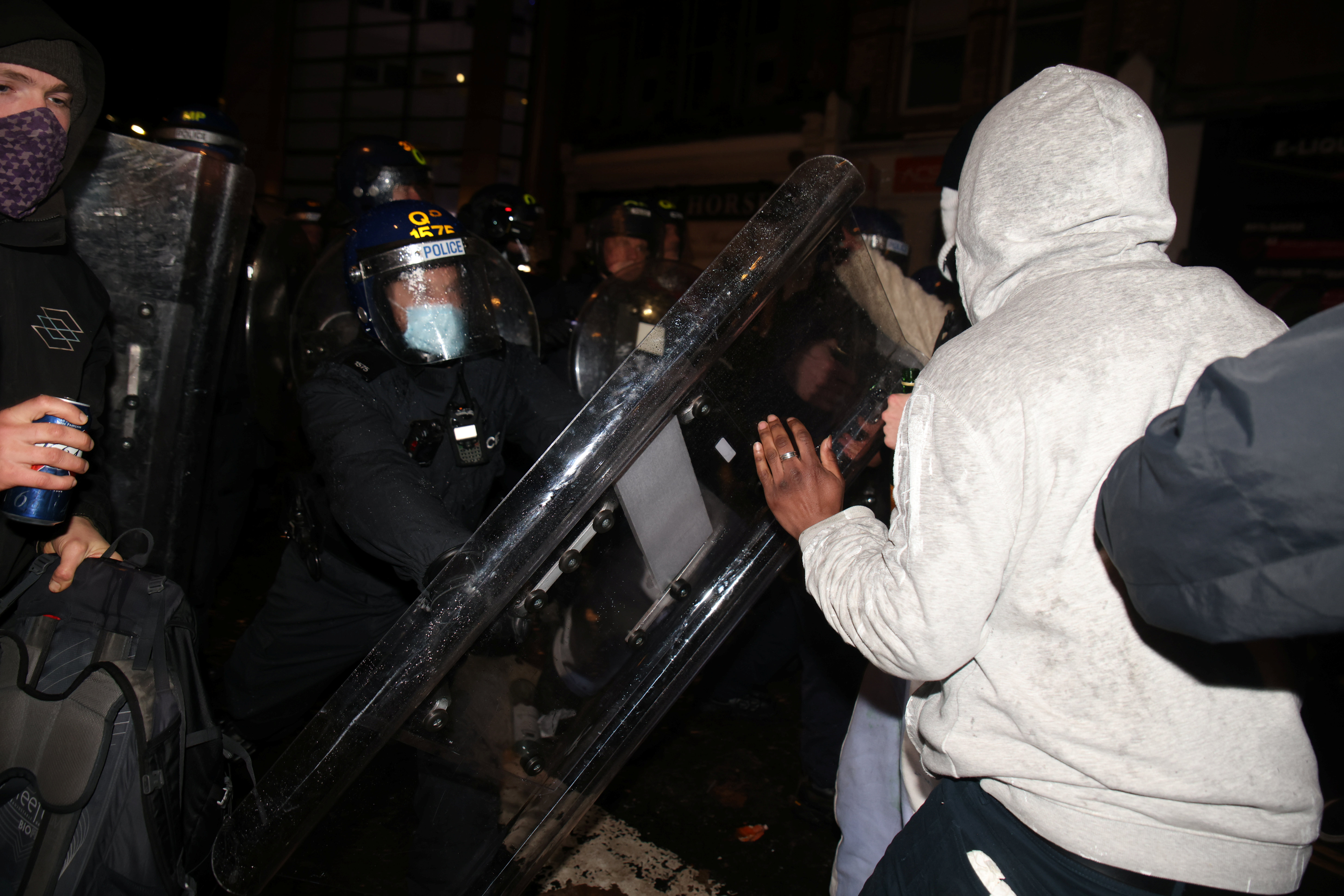 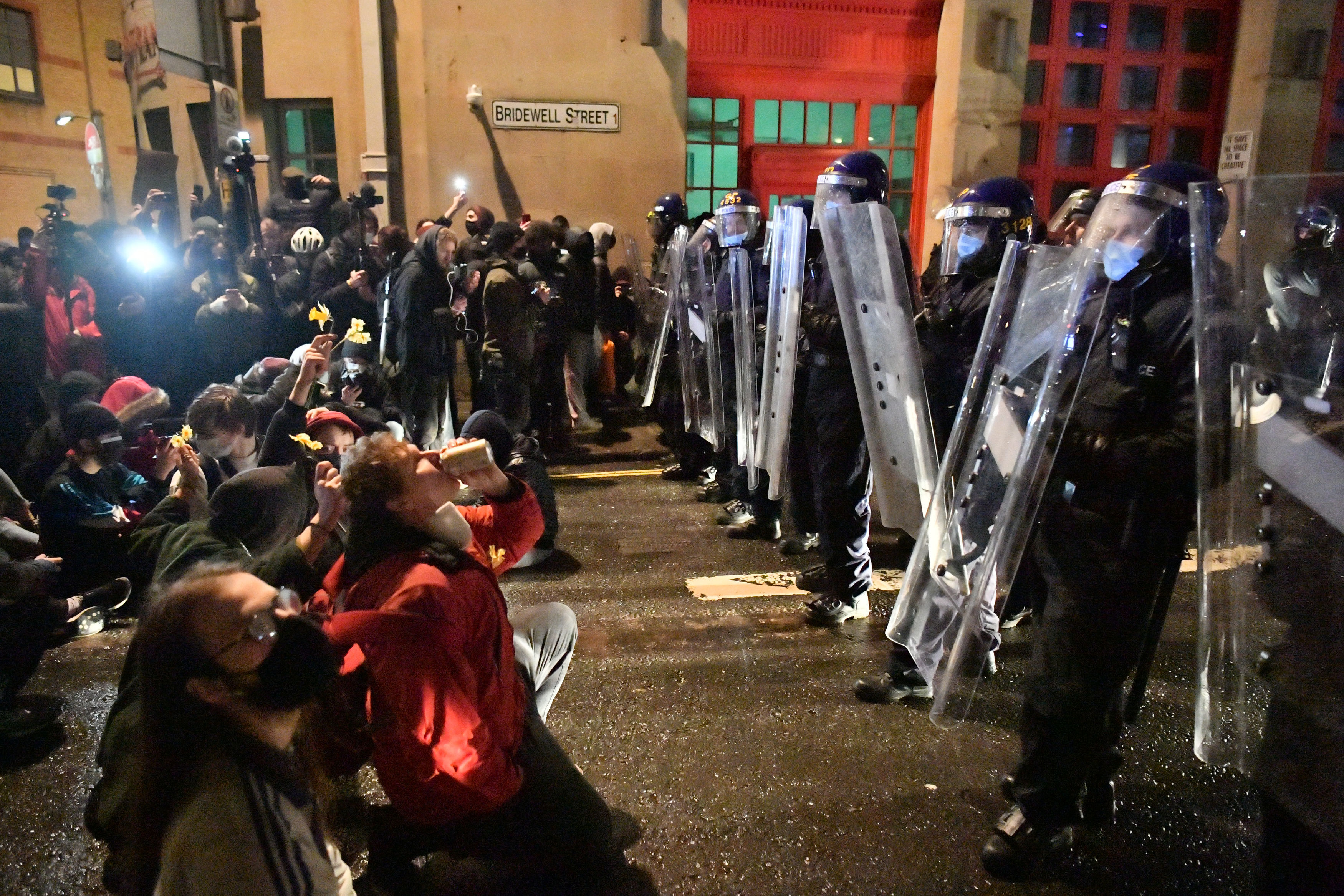 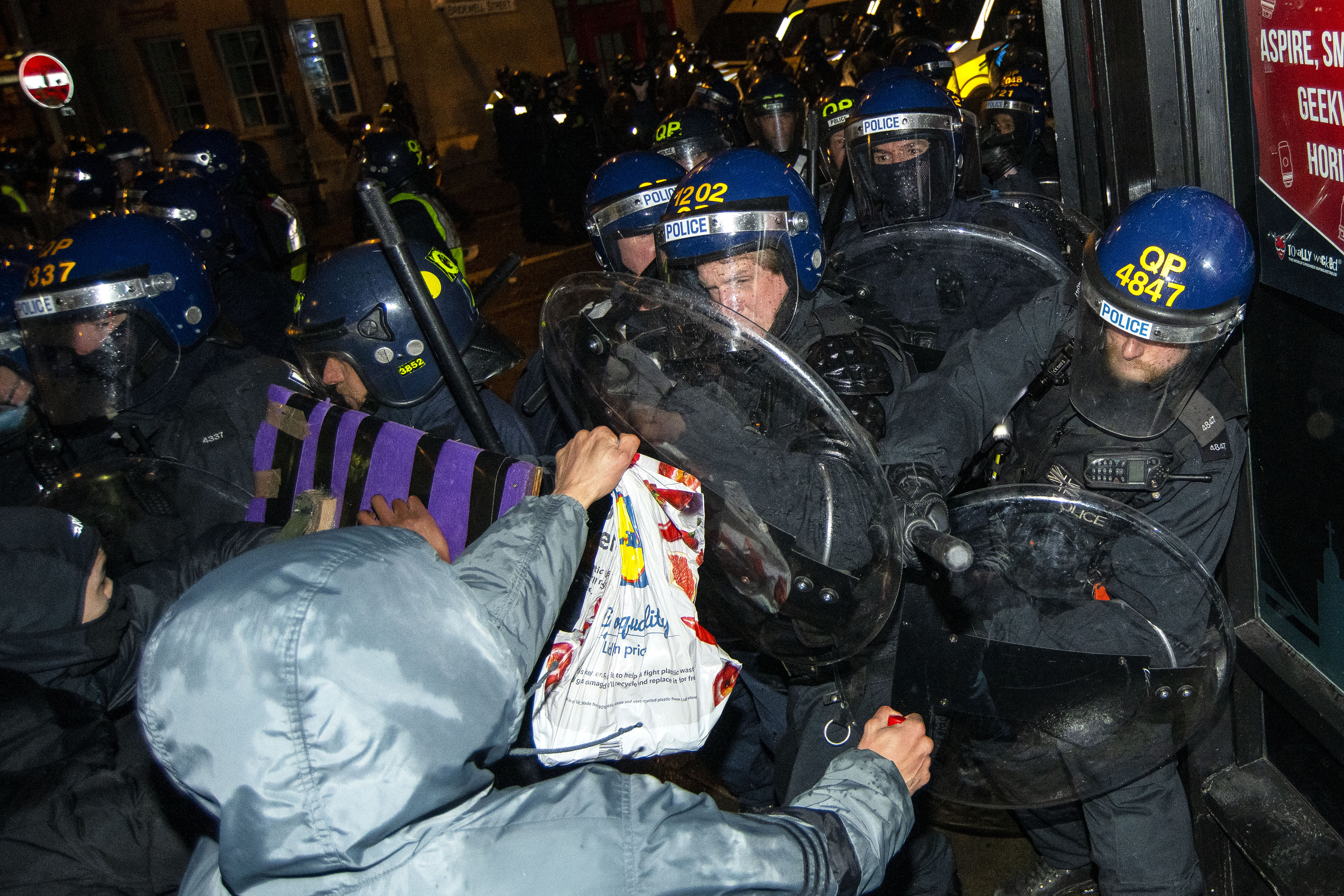 Officers warned protesters force would be used – with mounted officers on horses and dogs on standby.

The baying crowd chanted “shame on you” as they were pushed back.

Other protesters were spotted with shopping bags full of alcohol after police put a restriction on city-centre shops from selling alcohol.

Earlier police formed a ring of steel around Bridewell Police Station, which was attacked in previous carnage.

The protests have been held in Bristol over the past week, protesting against the Government’s Police, Crime, Sentencing and Courts Bill.

And during Friday’s demonstrations protesters could be heard chanting “ten years for protest, five years for rape” and “justice for Sarah”, referring to the recent murder of Sarah Everard in London.

Demonstrations last Sunday and Tuesday had also started peacefully before descending into assaults against police and acts of vandalism. 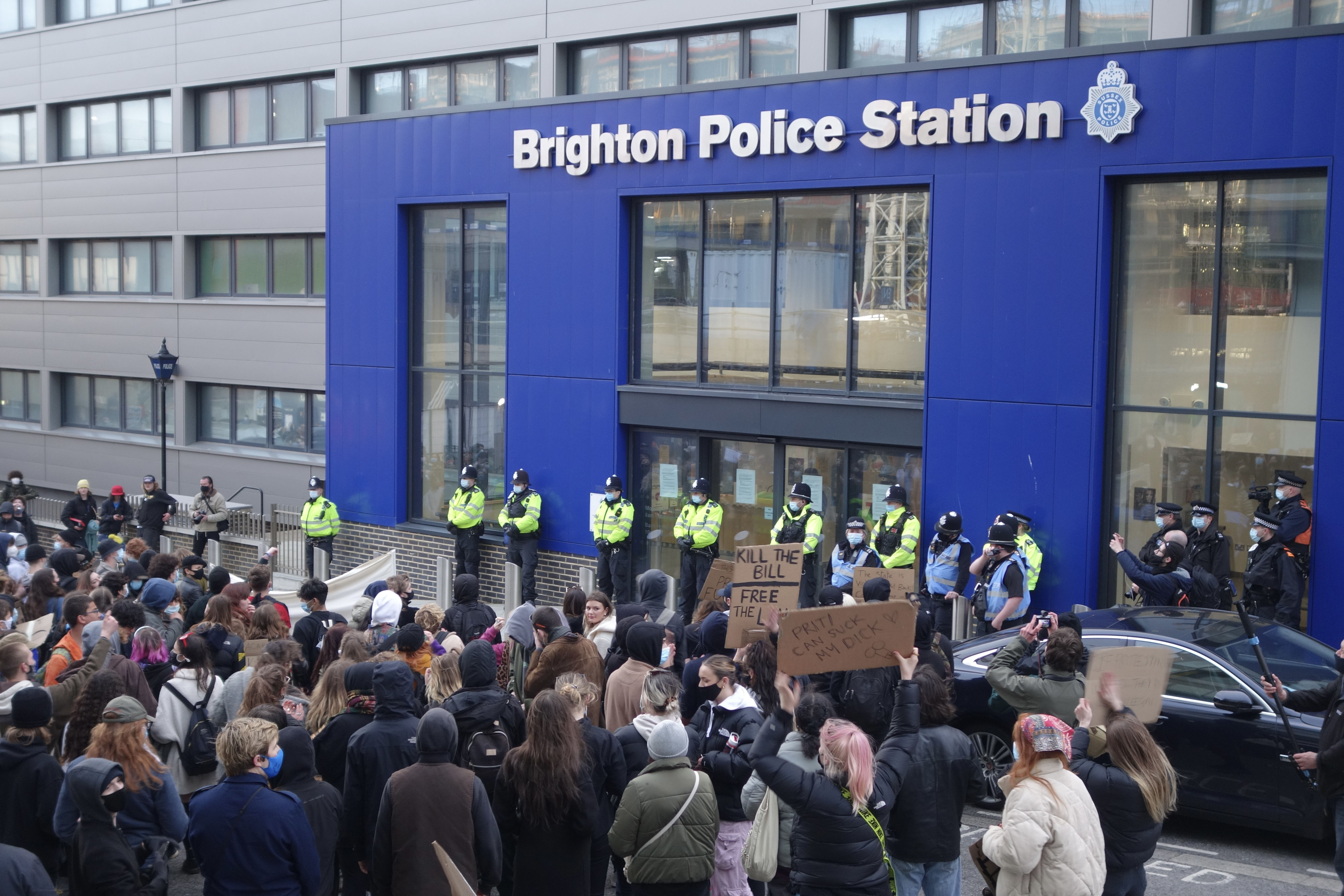 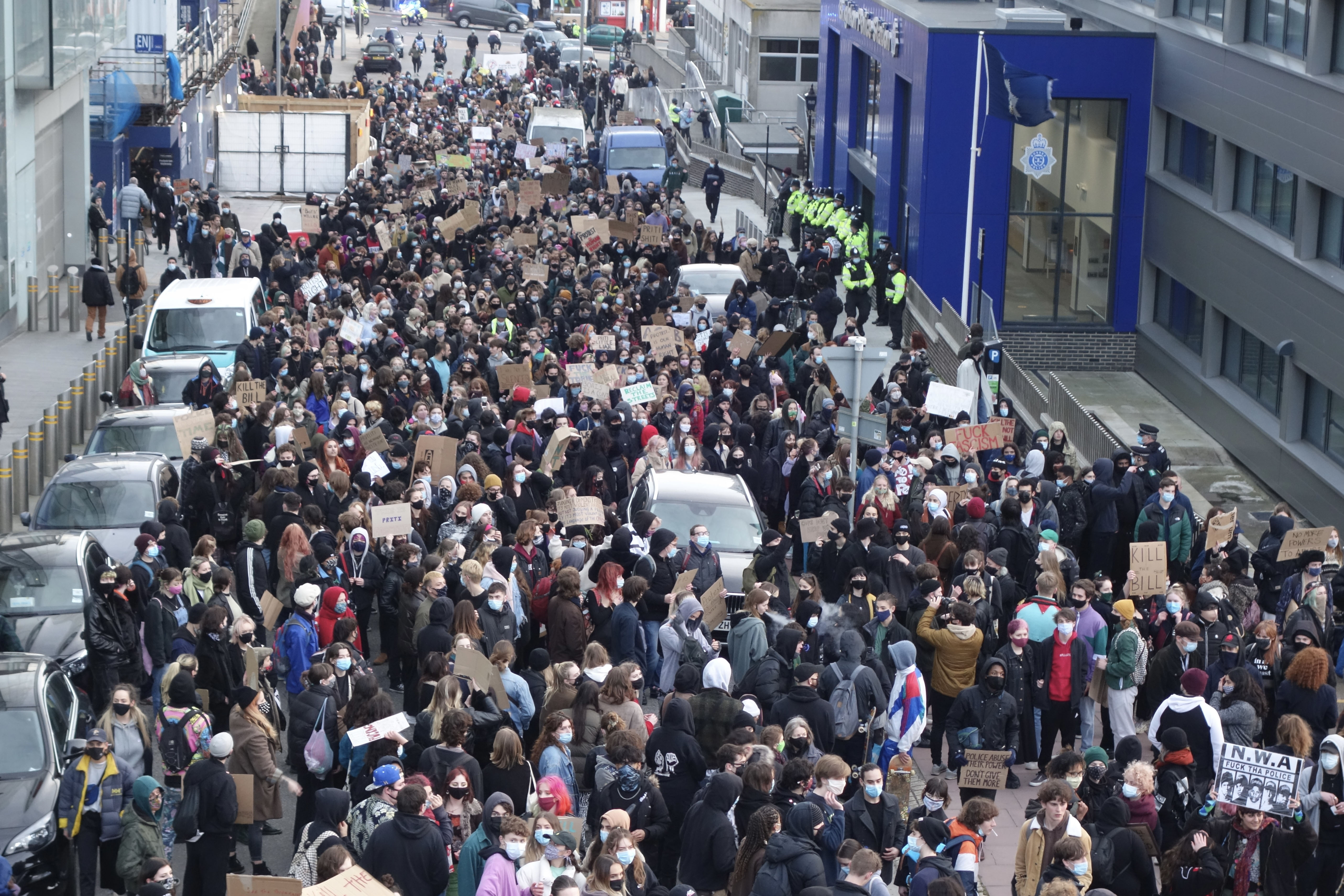 Hundreds took to the streets in Brighton to demonstrate against the Police, Crime, Sentencing and Courts BillCredit: eddie mitchell 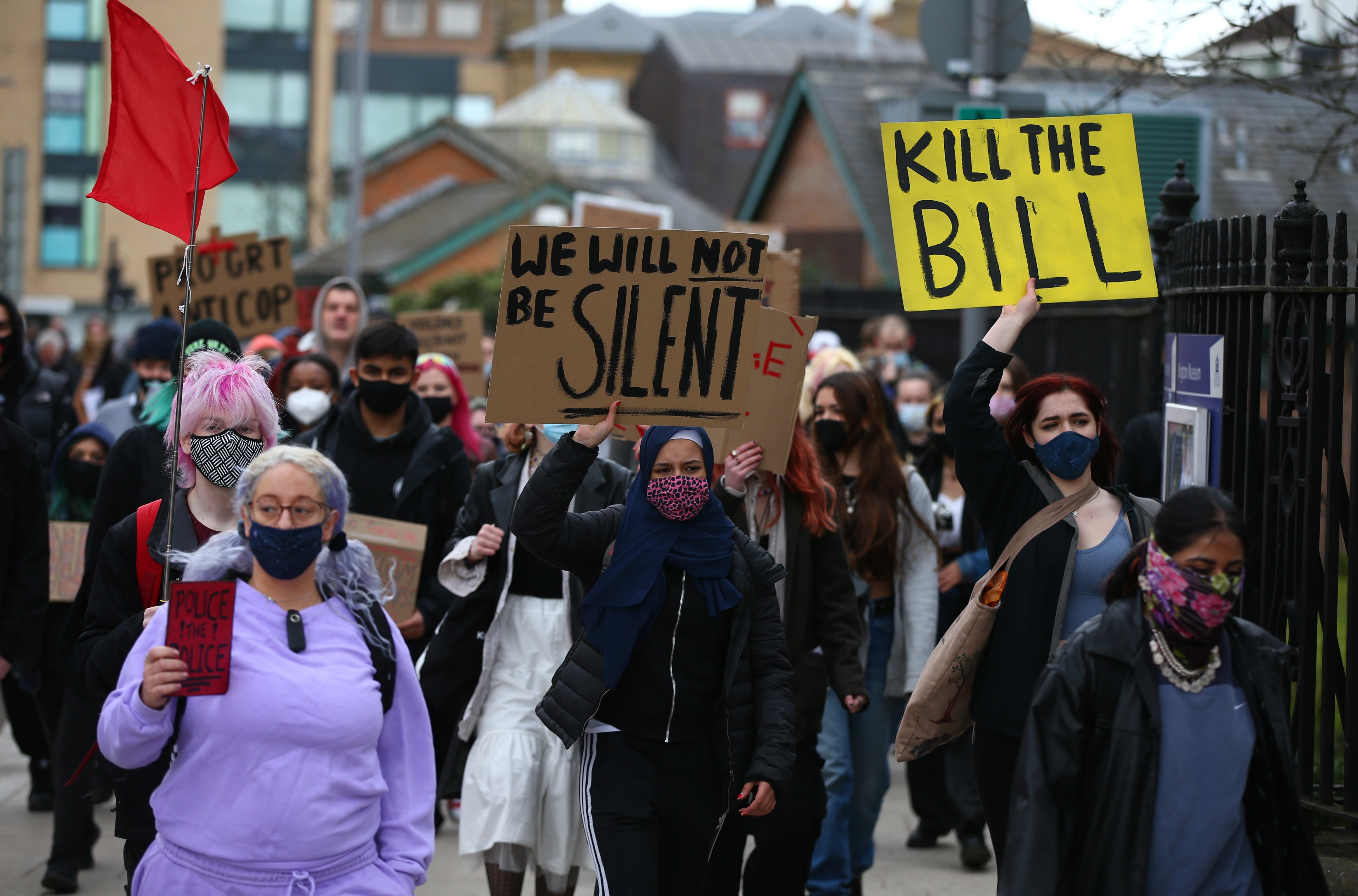 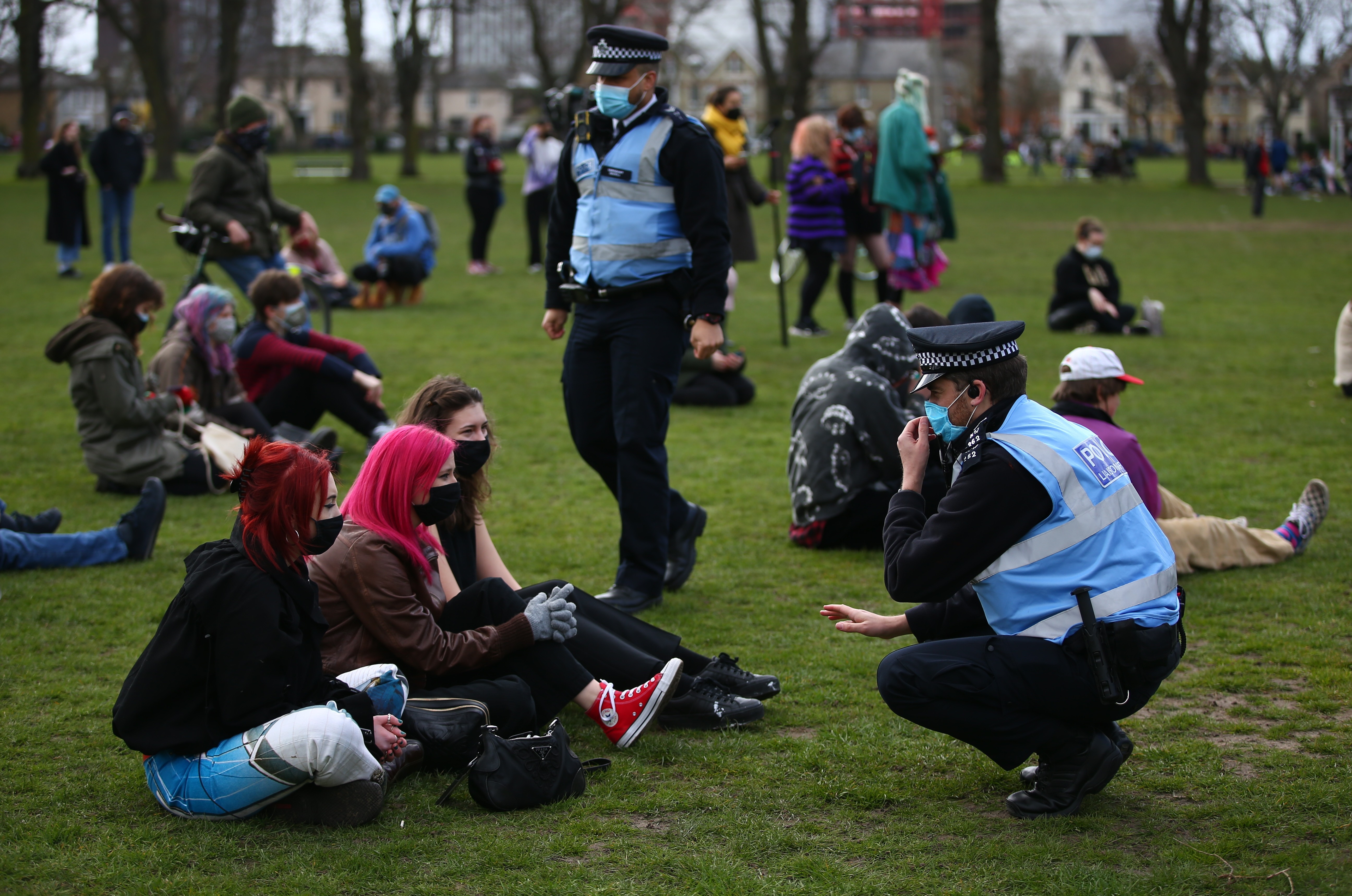 Officers speak to protesters in London on Saturday afternoonCredit: Getty