NEW data reveals which parts of England are racing ahead to vaccinate those in their 70s.

While London is inviting more of those in their 70s for their jab, the South West is focused on making sure all over 80s are reached first.

This interactive map reveals the proportion of people aged 70 to 74 who have been given their first dose in your area.

It also shows the rate for those 75 to 80, over 80, and how many over 80s have been given their second dose – which is needed in order to get the maximum level of protection against Covid.

The data, from NHS England, is broken down into 40 different health board areas.

The tool can be used to view the progress of the vaccine rollout in your area, giving you a glimpse of when you can expect to be invited.

So far, the NHS is working through the top four priority groups who are most vulnerable in society, including the elderly and frontline healthcare staff.

But talks have turned to when the next cohort will start getting theirs.

Boris Johnson said he will reveal his plans for the next wave of Covid vaccines for those under-70s on February 15.

And already some in their 60s can expect an invitation for their vaccine appointment from next week, according to The Telegraph.

This online calculator can give a rough idea of when you will get your first and second dose of the jab.

Which areas are vaccinating people in their 70s?

London is storming ahead to vaccinate people in the age group 70 to 74 years old.

This age band is the last to complete in the top four most at-risk groups.

However, these health boards have given the fewest people in their 80s their first dose – all less than 75 per cent.

And they have also vaccinated less than 80 per cent of people in the age group 75 to 79.

It suggests the region is focused on spreading first doses over the top priority groups, rather than focusing on getting the most elderly done first, or that a higher proportion of the most elderly are declining their offer.

Vaccine minister Nadhim Zahawi has previously said that in areas where “the majority” of over-80s have had their first shot, the over-70s group will be invited for their jab.

But with some areas rolling out vaccines at a faster pace, it could result in older and more vulnerable Brits delayed in their first dose. 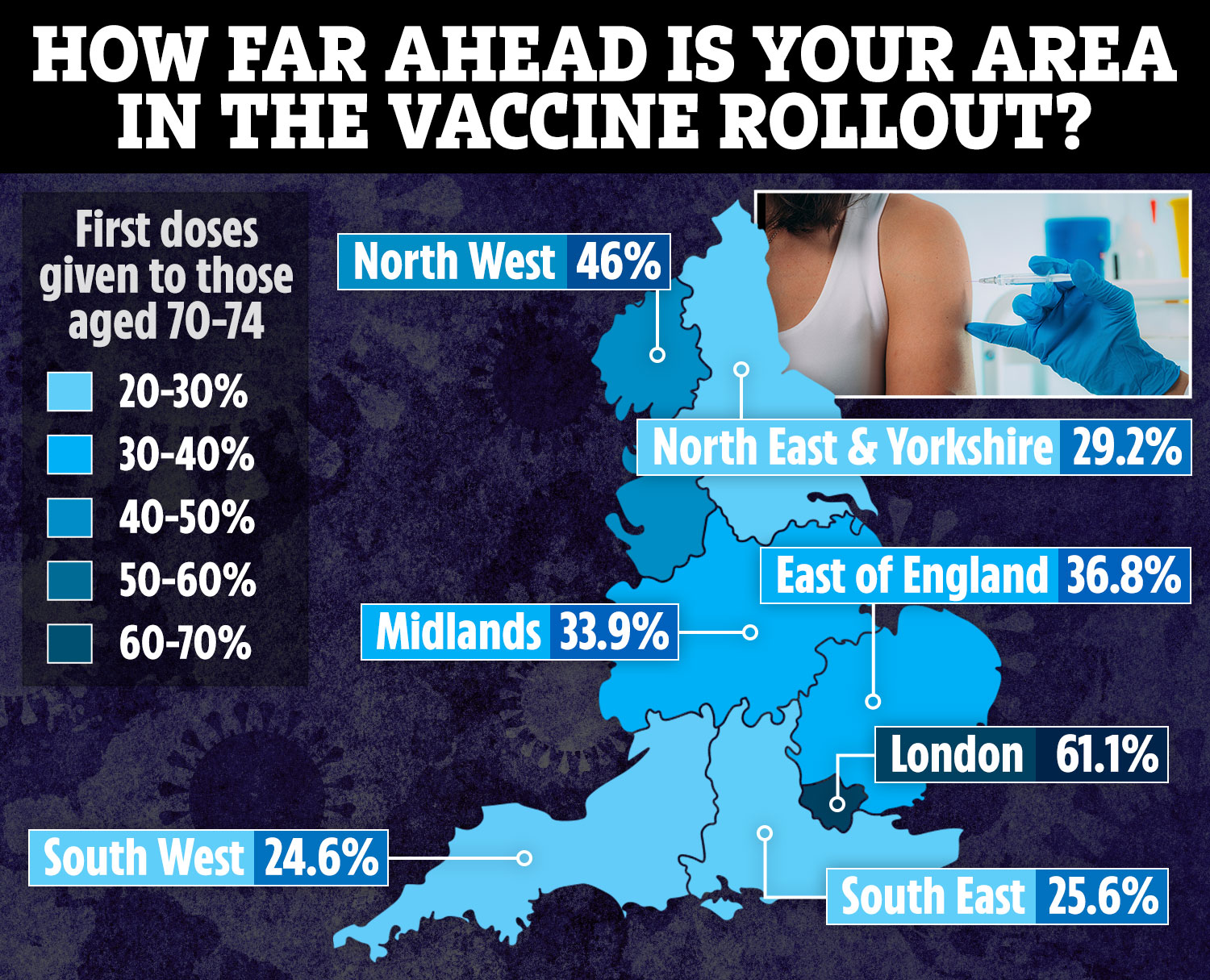 Meanwhile, Devon, Hampshire and Shropshire/Telford and Wrekin have failed to invite many people in their 70s to get their first jab.

The data shows fewer than 20 per cent of those aged 70-74 years have got their first dose.

Where have the most over 80s been given their first dose?

However, all three health boards are among those focusing on getting their over 80s jabbed at a speedy rate.

Although Hampshire has only given 19.5 per cent of those aged 70 to 74 years old their first dose, it has reached almost 93 per cent of the over 80s.

Meanwhile, Gloucestershire has vaccinated the highest proportion of people in their 80s of all areas in England.

Almost 95 per cent of those over 80 have had their first dose of the potentially life-saving vaccine.

It has administered jabs to a far lower percentage of 70-74 years olds than in London – at 26 per cent.

Some areas sit in the middle – Herefordshire and Worcestershire; Staffordshire and Stoke on Trent; and Somerset.

These areas have jabbed upwards of 93 per cent of over 80s – the highest in all of England.

And they have also managed to give first doses to around a third of those 70-74.

Where are second doses being given?

With now more than 10 million people protected by one dose of a vaccine, the NHS will now need to shift its focus on how to give out the second doses.

Some parts of England are already pressing ahead with giving out second doses to the top priority group, the over 80s.

In Northamptonshire, 23 per cent of over 80s have got their second dose, and will soon have the maximum possible protection against Covid.

Birmingham and Hertfordshire/West Essex have invited one fifth of over 80s for their second dose.

Meanwhile, in Nottinghamshire, less than one per cent of over 80s have got their second dose.

It has one of the lowest rates for vaccination across all age groups, the data shows.

Where are the most and least jabs being given for each age group?

Boris Johnson has pledged to vaccinate almost 14 million of Britain’s most vulnerable before mid-February.

Data suggests the UK is on track to reach that target, from where the programme will move onto those aged in their 60s and 50s.

The country is also on course to smash its target and give all adults both doses by August 14, analysis suggests.

Scientists said the UK could achieve herd immunity against Covid by July — stopping the disease in its tracks.

Research by Prof Karl Friston suggests a combination of Covid jabs, natural immunity and better weather will bring an end to the pandemic in the UK.

As a result of the speedy vaccine programme, the PM is under mounting pressure to start easing lockdown restrictions.

Mr Zahawi said Britain will be able to massively ease restrictions once all over-50s have been offered the jab by late spring.

But senior Tory MPs yesterday urged PM Boris Johnson to lift all restrictions by May.

Mark Harper — chairman of the Covid Recovery Group of lockdown sceptics, with 70 Tory MPs — said: “Back-of-the-envelope calculations I did based on two million doses a week mean you could get the top nine priority groups, first doses, and the top four groups, second doses, all done by the end of May.

“So it seems to me by the time you get to the end of May, no later than that, you should be in a position to get rid of restrictions completely.

But other scientists have said it would be too risky to lift restrictions while there are millions of people under the age of 50 unvaccinated.

It could allow the virus to spread rapidly among the younger populations, and some would die of the disease.