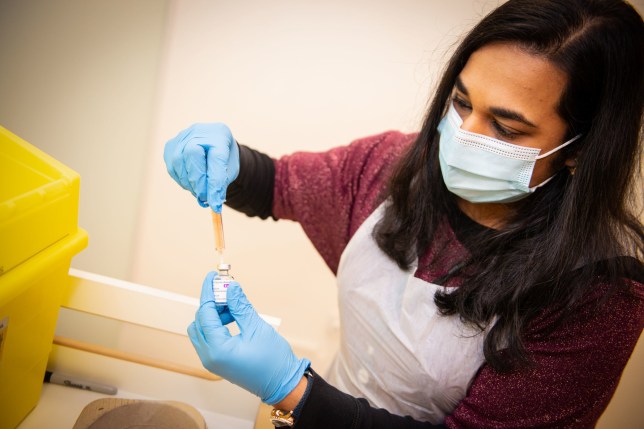 I know I have a duty to receive the vaccine to protect others in my life (Picture: PA)

The release of a series of Covid-19 jabs thought to be capable of lifting the world out of crisis has given the nation hope in a time of struggle.

It has, however, plunged as many as one in 10 people living with a phobia of needles into a state of despair. When the dreaded letter comes through the door inviting me to receive my injection, I will have to overcome a huge psychological struggle to accept the appointment.

Although not compulsory, the Covid-19 vaccine is a worrying concept to those with trypanophobia: a catch-22 situation in which you’re damned if you do and damned if you don’t.

The overwhelming moral responsibility to receive a dose of this treatment anxiously coveted by so many, despite intensely fearing needles, is a battle I think about everyday.

At times where contact with needles can’t be avoided, many people with trypanophobia experience feeling faint due to a significant increase, then a sudden drop in both heart rate and blood pressure.

This, alongside feeling dizzy, chest tightness, and severe anxiety constitute my personal symptoms.

But receiving all necessary inoculations throughout the first four years of my life, my early encounters were absent of the usual trauma that results in a phobia of needles.

Things began to change at my girls’ grammar school: me and my classmates queued up outside classrooms, entering one-by-one to receive our HPV vaccinations.

Whispered horror stories of people being held down by a group of nurses meant hysteria passed from one ear to another as we stood waiting in line.

Of course, not an ounce of truth was held by any of these tales, but to a bunch of terrified 12 year olds, anything and everything was to be believed. It was no wonder we were scared out of our wits by the time we reached the vaccination stations.

My first immunisation ensued relatively successfully. Sitting stiff in the chair, I remained silent as a long list of possible side effects ran through my head. However, the second jab in this three-dose regimen lay four months in my future – a fact of which I was all too aware.

The final two doses proved more difficult, as the pure fear that had rendered me mute for my first vaccination had given way to tears. My breathing became disordered and rapid as the nurses made a desperate attempt to distract me from the incoming needle.

Eventually, I accepted both injections, though I fear the nurses exited the situation almost as traumatised as myself. Leaving puffy-faced and red-eyed, I was unsure of how I could face such an ordeal again.

When the time came to receive my meningitis jab at the age of 15, the nurses sat calmly with me until they decided the school environment was no longer the appropriate place for me to receive injections.

Though attempts were made to calm the tears and panic, many a crushed hand later, I was finally deemed as being in too much distress. I was causing harm to both myself and the other girls present.

Explaining my fear is a difficult matter. Usually, when asked ‘why do they scare you?’, I simply shrug my shoulders. For me, it is irrational. Yes, I know it’s just a pinch. Yes, I know it’s all over in a matter of seconds. None of this helps me.

If something is irrational, all attempts to make sense of it will not work, no matter how much I wish it would. It feels as if I am experiencing something I have made up in my head. But the intense anxiety, the spells of faintness, and the feeling of my heart beating out of my chest say different.

Having effectively been banned from being given vaccinations at school, the only alternative was to attend my GP practice. Despite my protestations, I was convinced by my long-suffering mother and brother to accept the jab, assured by the nurse’s promises that she would be administering it via a smaller needle commonly used with infants.

Whether it made a difference or not is impossible to tell. I have an amazing ability to block out everything while receiving vaccinations. I couldn’t even tell you what the room looked like.

A later experience saw me arrive at my university’s medical centre, only to find they had overbooked and didn’t have any flu jabs left. Having suffered the mental stress of anticipation in the fortnight leading up to the fated date, I returned to my student accommodation feeling distraught, particularly as I had explained my difficult situation to the medical staff prior to the appointment.

Although I am towards the back of the vaccine queue, this period of waiting is almost as bad as I anticipate the jab to be.

But I know I must get it. I am conscious of protecting two high-risk flatmates: one with diabetes and the other who has contracted pneumonia three times and is susceptible to regular chest infections.

When I return to my home in Kent, one of the first regions to enter Tier Four in December, I’ll also be wary of transmitting the virus to my asthmatic mother.

If not for myself, I know I have a duty to receive the vaccine to protect others in my life. Thankfully, I do not suffer from any pre-existing conditions that could exacerbate the effects of the virus if I should contract it.

Still, I care too much for my friends and family to give in to my fear, turn down the injection, and risk unwittingly passing Covid-19 onto those for whom it could be potentially deadly.

Therapy is out of the question. For me, something so irrational simply cannot be rationalised, so I see little point in wasting NHS resources. Turning to my family and my partner for support in the lead up to it seems to be my best course of action.

It is hard when social media is a constant reminder of others being inoculated, as I am constantly exposed to needle imagery and videos of the injection process in my news feed – a triggering source of anxiety.

Despite the psychological battle I will have to face, I know how vitally important it is to be immunised. I am in a luckier position than those whose healthcare systems are not as comprehensive and those whose pre-existing medical conditions prevent them from being immunised at all.

By receiving the vaccination, I believe I am acknowledging my moral obligation and responsibility to protect other people, particularly those closest to me: my friends and my family.

The emergence of the Covid-19 vaccine has shown me just how essential the ‘mind over matter’ mindset really is. Overcoming my fear of needles is definitely a goal for the future, though how I will go about this I am yet to find out.

MORE: I care for people with learning disabilities – and I want them to be able to get the vaccine sooner

MORE: I want to be infected with Covid-19 on purpose to help find a vaccine faster

MORE: My flatmates want to break lockdown and I don’t know what to do

Overwatch 2 and Diablo 4 release dates WON’T be in 2021, game-maker reveals