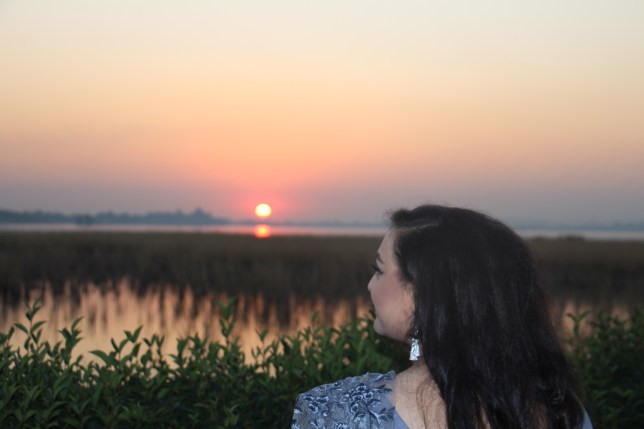 About 1 in 10 UK women suffer from this chronic health condition (Picture: Sarah Harris)

‘If it comes down to it, do we have permission to remove one or both of your ovaries?’ the surgeon asked as we went through the consent form before my surgery.

I took a deep breath, and said yes. In that moment, I felt like my plans for the future had just collapsed around me. This was in 2018, when I was just 21.

By that time, it had been two years since I had been diagnosed with endometriosis – a gynaecological condition that involves tissue similar to the lining of your uterus growing elsewhere in your body, like the Fallopian tubes, and includes symptoms such as irregular periods, chronic pain and in some cases, infertility.

Within a few months of diagnosis, my condition had advanced so rapidly that it affected not just my reproductive organs but also my bowels and bladder. I had my first surgery, a diagnostic laparoscopy in 2017, to investigate the extent of the damage and potentially treat it. But my surgeon didn’t expect my condition to be so severe and was unable to fix anything.

My organs had started to stick together and I was in constant pain. I was losing so much blood that I was barely able to leave the house for more than 30 minutes without leaking through my clothes. Most days, I was in too much pain to even make myself a meal, let alone socialise.

I was referred to one of the few endometriosis specialist centres in the UK, but given that the condition affects one in 10 women of reproductive age, the waiting list for a consultation alone was more than eight months long.

In the meantime, my gynaecologist and I decided to put me in a chemically induced menopause, with the promise that as soon as I decided I wanted to conceive, this would be reversed and we could attempt a round of IVF. Not only would doing this stop my periods, but also, hopefully stop the progression of the condition. And it did. But it didn’t come without side effects. Hot flushes and nausea became my new norm.

Unfortunately, it also did very little to treat the pain. So, when the time finally came for my second endometriosis surgery, more than a year after my first, I was very hopeful.

Even though it was far lengthier and more complex than the first. It not just involved removing the endometrial tissue, but also putting my displaced organs back where they were meant to be.

Not only was there a high risk of damaging my ovaries, but also my bowels and bladder. I had considered the potential of needing a stoma bag or catheter for a long period of time.

But I never truly considered my fertility until that moment, when we were going through the consent form.

I had known that I wanted children fairly early on in life. Taking care of my younger brother and cousins only reinforced the desire to one day be a mother. It was something I wanted more than anything, so the surgeon’s warning felt like it snatched my plans for the future away.

Suddenly, my priorities changed. Now it wasn’t all about finding a way to manage my pain and regain quality of life, it was also about preserving my fertility, to one day have a family of my own.

Luckily, when I woke up from my seven-hour surgery and asked my surgeon how it went, he said it couldn’t have gone better. My organs had come through undamaged, and my ovaries were still there.

But that didn’t mean future surgeries would be as successful. Endometriosis is a chronic condition with no cure in sight, the chances of reoccurrence are high, and the majority of sufferers need multiple surgeries.

Despite the second surgery I still regularly suffer from severe pain. Just the slightest bit of overexertion can result in a flare-up, so it’s crucial to plan ahead as much as possible.

I’ve spent a lot of time over the last few years thinking about what I want from the future.

My organs had started to stick together and I was in constant pain. I was losing so much blood that I was barely able to leave the house for more than 30 minutes

I went from completing my undergraduate degree in Journalism & Sociology – with my dissertation on the endometriosis treatment and diagnosis process – to a Master’s in Public Health. I plan to continue doing much-needed research on the impact of endometriosis on people’s lives and hopefully improve flaws in the treatment.

I have also been thinking about the possibility that I will not be able to have my own biological children. Through support groups on Facebook, I have spoken to dozens of women with endometriosis who are facing similar struggles. Posts about IVF, miscarriages and trouble conceiving are common, and it was reassuring to know there was a community out there who would support me if needed.

I spent hours scrolling through the internet, reading stories about couples in their thirties who had had IVF or ended up adopting. I realised that all the narratives surrounding infertility seemed to feature loved-up couples who had been trying for more than a decade.

But what about people like me, who are young and single? Options like freezing my eggs aren’t just complicated and painful, but also ridiculously expensive with prices starting at £3,500 to harvest them, and further annual costs to store them.

When I spoke to my gynaecologist, who was aware of my non-existent relationship status, he told me that I could ‘try IVF when I was ready’. But he added that if I did want a biological child, I should try and get pregnant sooner rather than later. Easier said than done.

It’s not like many people in their early twenties are also looking to start a family. I probably wouldn’t be either if it wasn’t for my particular situation.

There have been days since my excision surgery when the pain has been so severe, all I wanted was to ask my doctor to remove my ovaries and uterus. In these moments, it’s frustrating to think that I’m left with a choice between my future as a mother or my quality of life.

I’m aware that freezing my eggs isn’t the only option. Several people I know have gone through similar struggles and ended up adopting their children or using a surrogate. And I would consider both those options if it came to it. But I can’t help feeling like I want that flesh-and-blood bond, and if I can have that then I want it.

In this pandemic, I’ve had a lot of time to consider my options. And after lengthy conversations with not just my doctors but also my family and other endometriosis sufferers, I’ve decided to reevaluate my position after I turn 25.

And if I’m still single and my health has deteriorated, I’ll decide whether or not freezing my eggs is a viable option. But for now, living in a constant state of fear of the unknown won’t help.