HAVING Covid before the Pfizer vaccine makes you twice as likely to suffer side effects, data shows.

However, scientists said this was positive news because it means those who have had the infection before were making “absolutely widely successful responses”. 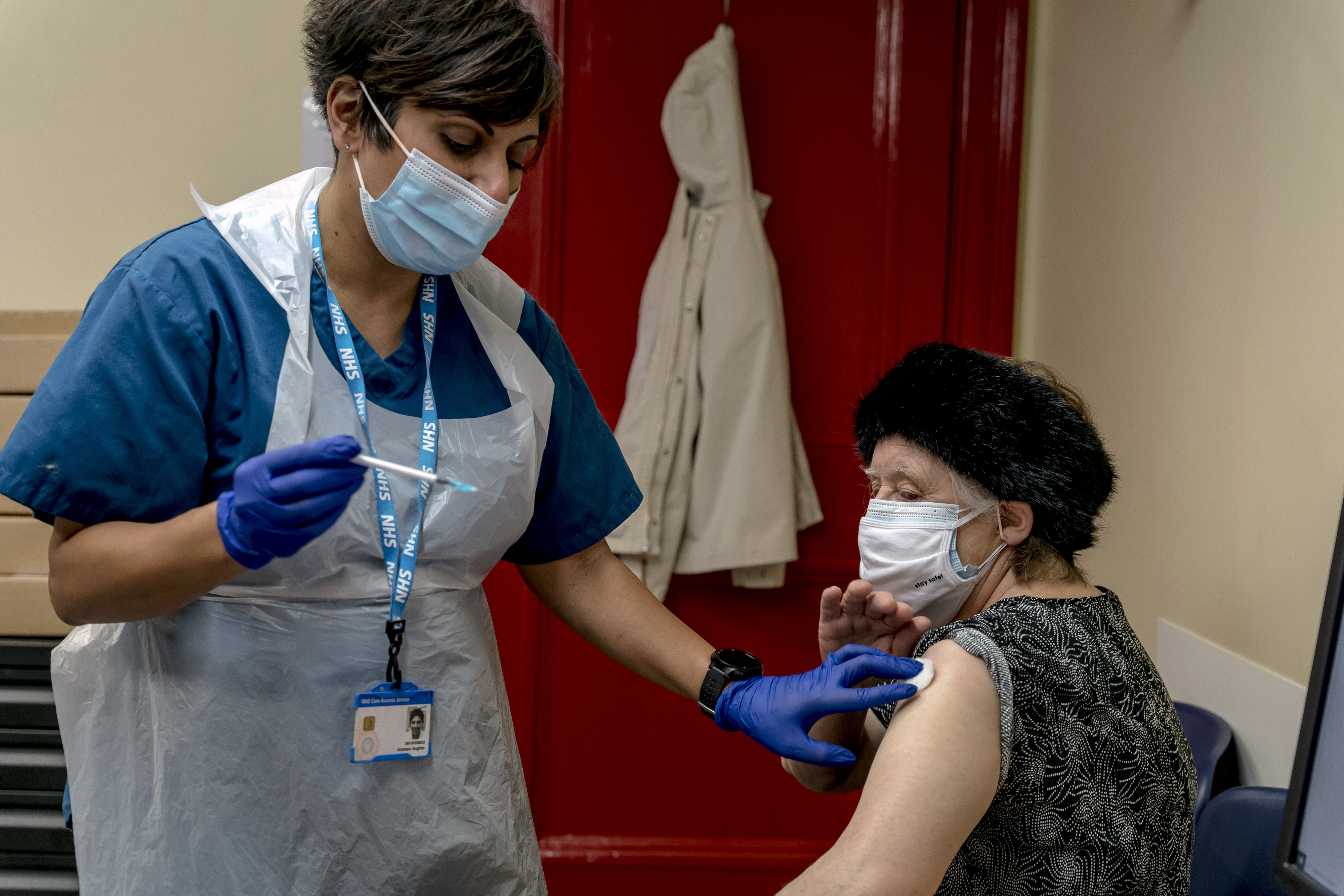 Having Covid before the Pfizer vaccine makes you twice as likely to suffer side effects, data shows, but it is a good thing. Pictured: Francis Ennis, 74, receiving her jab at Bloomsbury Surgery in London, January 28Credit: New York Times

A third of previously infected people had at least one whole body side effect – the most common being fatigue – in the week after their first Pfizer dose.

This compared to 19 per cent of who had never tested positive for Covid.

Experts said if the immune system already recognises the coronavirus due to prior illness, the response will be larger when the vaccine is injected.

Some scientists believe that because of this, those who have already had Covid may not need their second dose of the jab.

Tim Spector OBE, lead scientist of the research, King’s College London, said: “This could be good news, as a larger response like this suggests that those getting a first dose after having had Covid are generating a stronger immune reaction and may get greater protection from just a single shot of the vaccine.

“I think it really invites the question about whether, with a bit more data, we might be able to say these people don’t need a second booster.

“That would potentially save around 10 million vaccines. Or at least it could be delayed several months more.”

Danny Altmann, professor of immunology at Imperial and member of the British Society for Immunology Covid-19, agreed that it could save up doses.

He told The Sun: “Scientifically it all makes sense – the people suffering the biggest reaction to the dose because they were previously infected are also the ones, almost certainly, making the absolutely widely successful responses.

“So it’s a good thing and you would imagine you could save on second doses.

“But it’s really hard to implement, because you can’t prove who that is relevant for.

“In this country because we only did so little PCR testing during the first wave, and we’ve got an awful lot of people out there who can’t really tell you with certainty if they’ve had it before or not.”

The data comes from the ZOE COVID Symptom Study, which has been used by mobile app users since March 2020 to log symptoms and test results of Covid.

Researchers at King’s College London (KCL) have used the data to track the outbreak, but are now turning their hand to assessing the effectiveness of the vaccine rollout.

Some 280,000 people have been logging their experiences after being vaccinated – the largest outside the vaccine trials – and the latest findings are based on a subset of 40,000 doses. 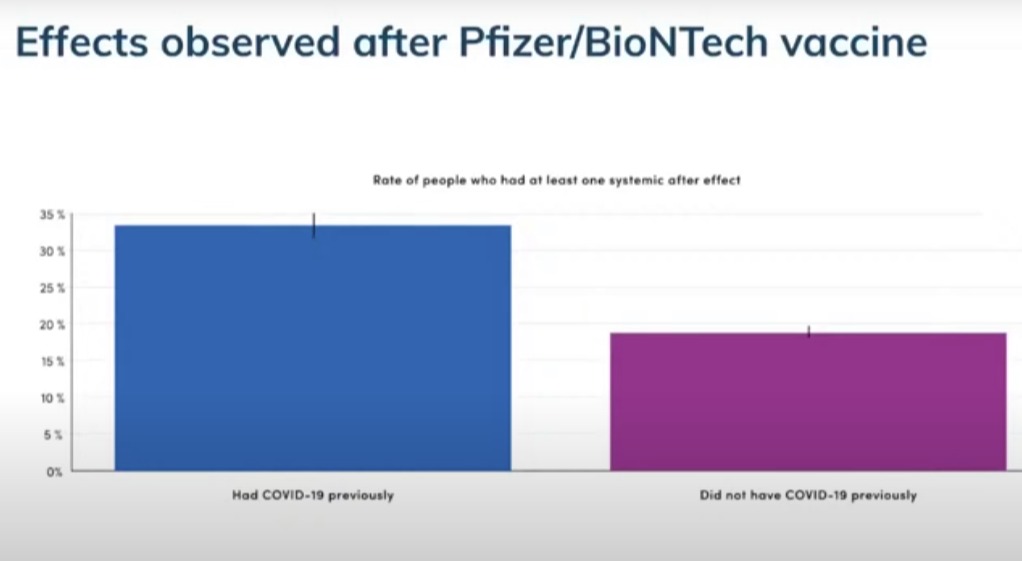 The most common were fatigue (nine per cent), headache (eight per cent) and chills (four per cent) – all normal reactions to a vaccine.

The effects were seen within two days of injection and only three per cent of people were still suffering beyond three days.

Dr Anna Goodman, a consultant in infectious diseases and an investigator on the Oxford vaccine trial, said this was a “well recognised” finding.

Speaking on a virtual briefing, Dr Goodman said: “We do expect this. With priming and boosting [of vaccines], your immune system has seen the virus before. You tend to have a bit more of a response when you see the antigen again.

“And that’s also been seen to be true perhaps in people who have had Covid and then have the vaccine. They have more of a reaction.”

A total of 37 per cent of app users said they experienced some local after effects such as pain or swelling where the injection was after the first dose.

But this went up to 45 per cent after the second dose, supporting the theory that the immune response gets stronger the more it is exposed to the coronavirus spike protein.

Prof Spector said: “I’m expecting once we analyse a bit more data we will show this group who have previously had Covid, maybe six months before, have an even bigger protection. 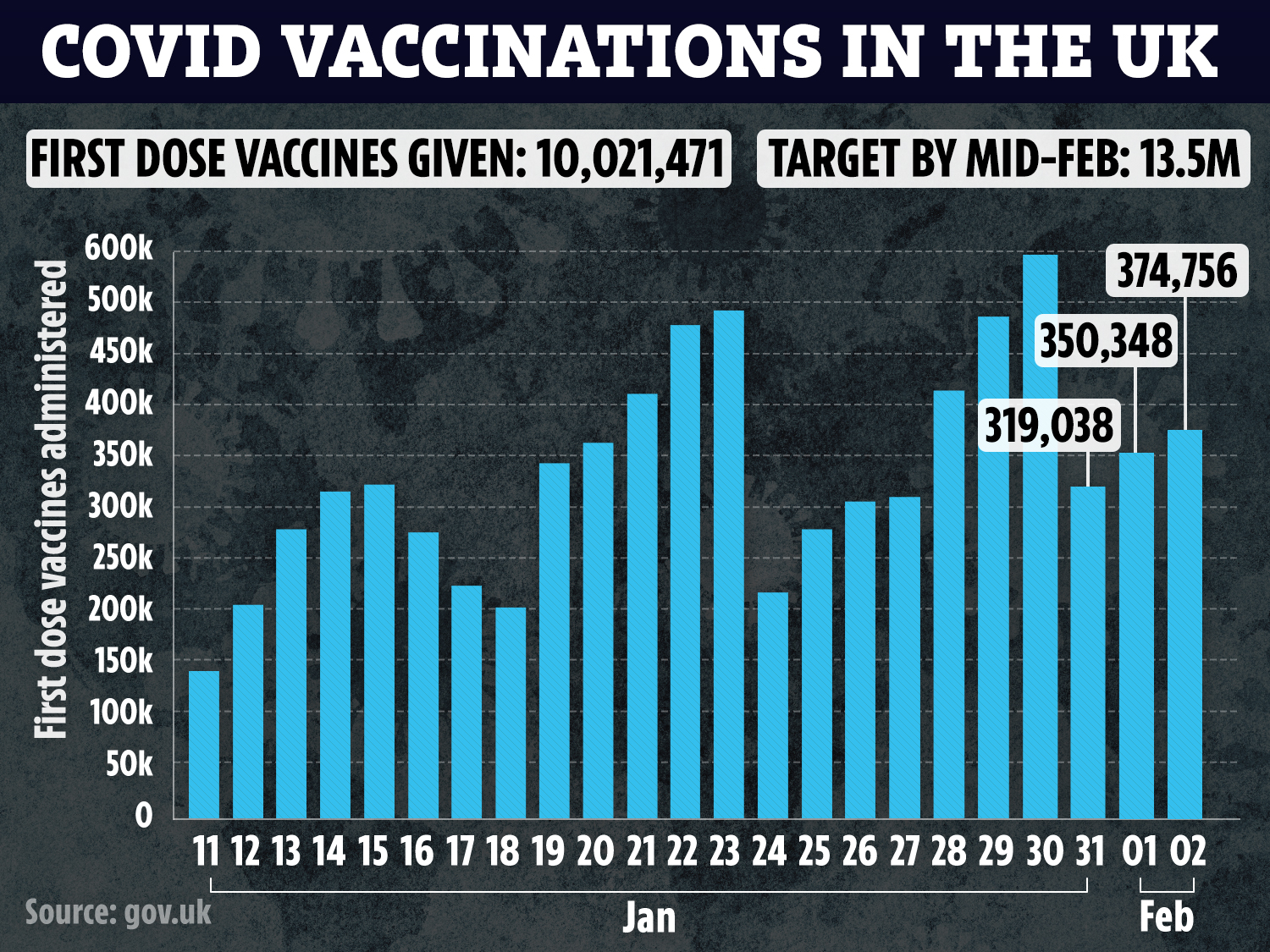 “I think this is a really exciting area of research our app can uniquely give data for.”

Dr Goodman reassured those who have had Covid that getting a second dose was not dangerous.

More than 10 million people in the UK have now received their first dose of a coronavirus vaccine.

The Health Secretary hailed the milestone as “hugely significant” while the Prime Minister expressed thanks to those who had helped make it happen.

Matt Hancock said “every jab makes us all a bit safer”, as he made the announcement on Twitter.

But Professor Chris Whitty said that while the vaccine rollout was “extraordinarily fast” there were supply constraints.

And he said that those who have received their first dose will soon be due for the second jab, which will “inevitably slow things down” in the rollout.

“We do have to vaccinate all of them within 12 weeks and that means that from March, we’ll be starting to re-vaccinate as well as the first vaccines, and that will inevitably slow things down,” he said.