Rabbles gathered in London despite the plea of experts and authorities to stay at home to stop the spread of the deadly bug as cases continue to soar. 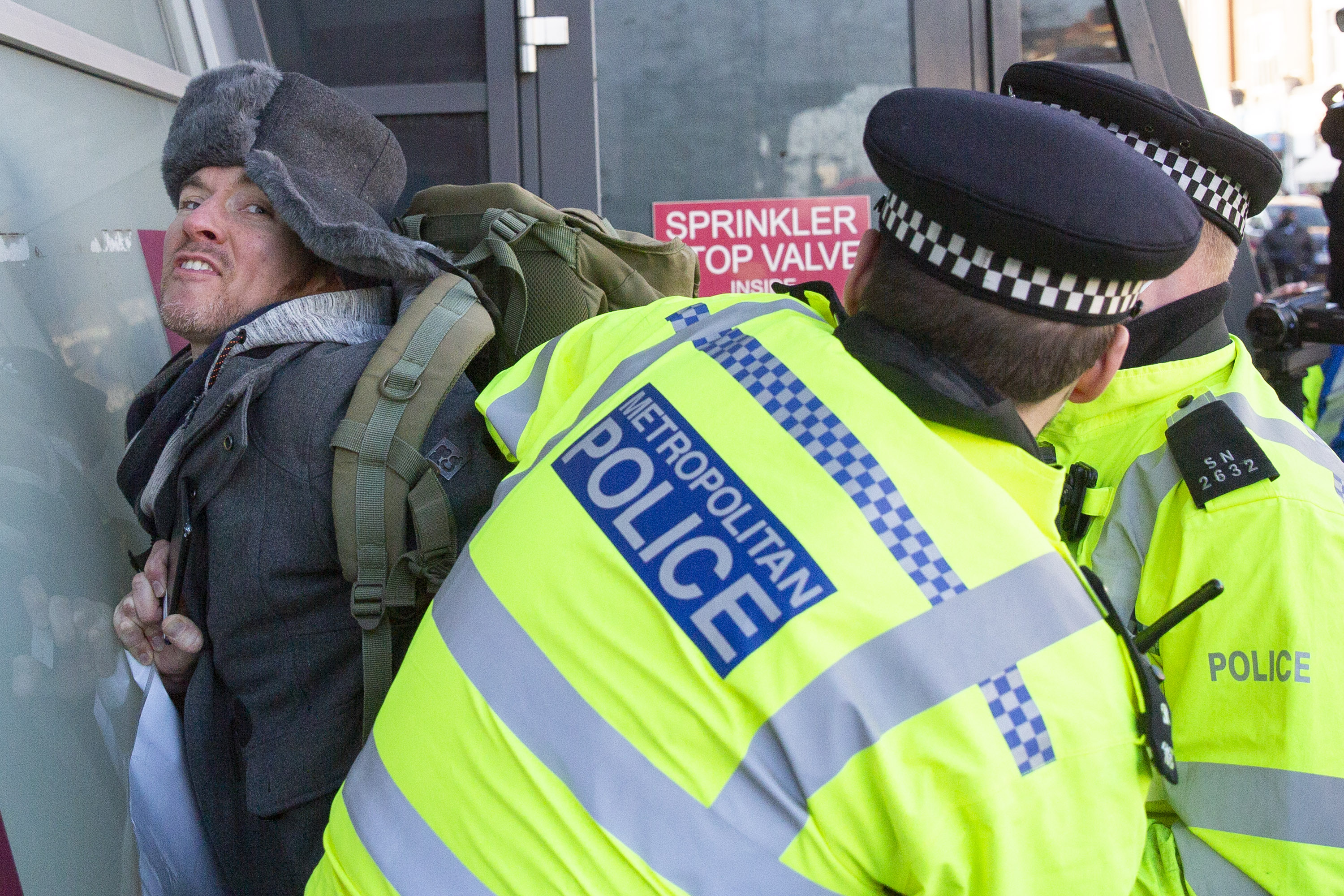 A protester is arrested during the anti-lockdown protests in London todayCredit: © 2020 Joshua Bratt 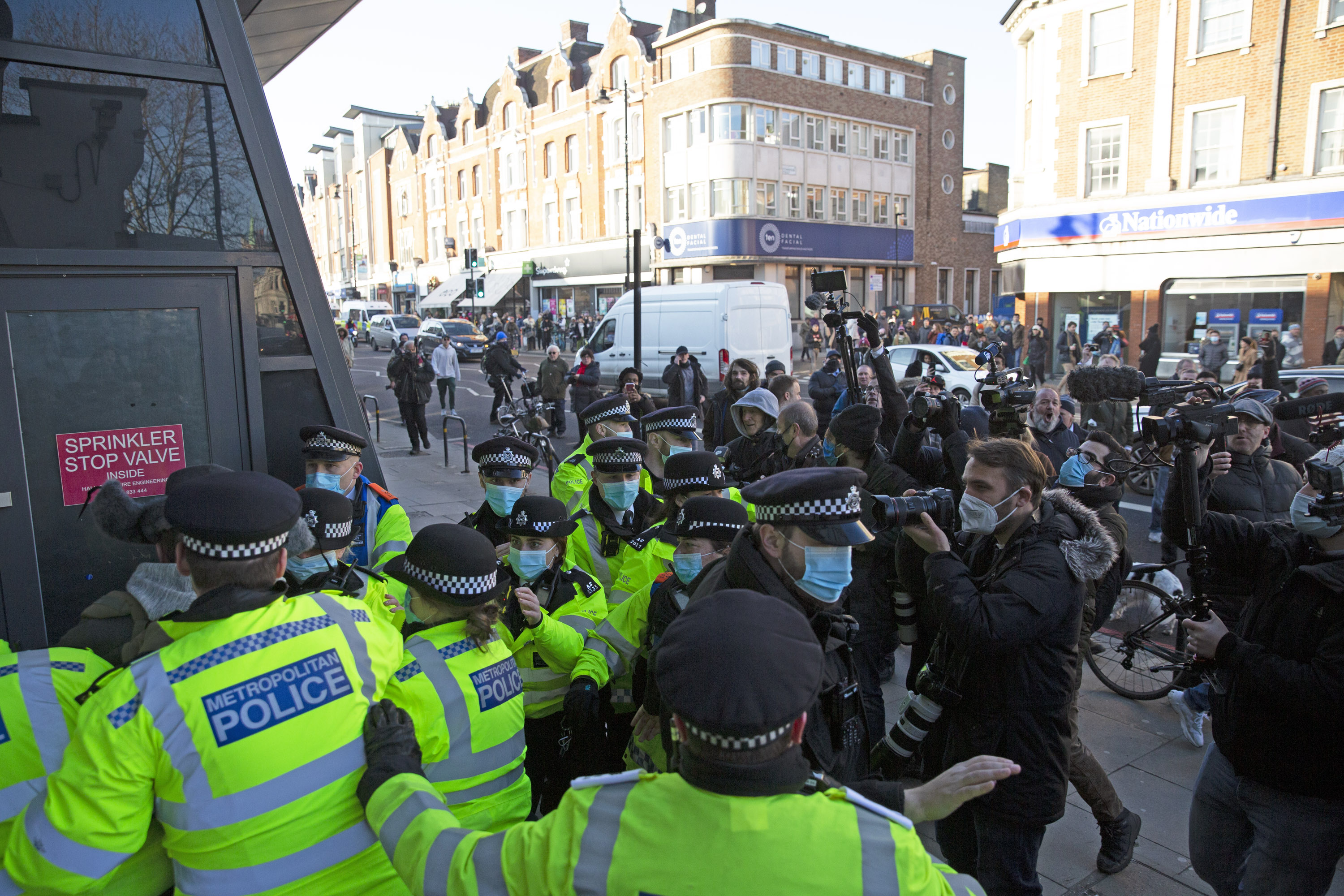 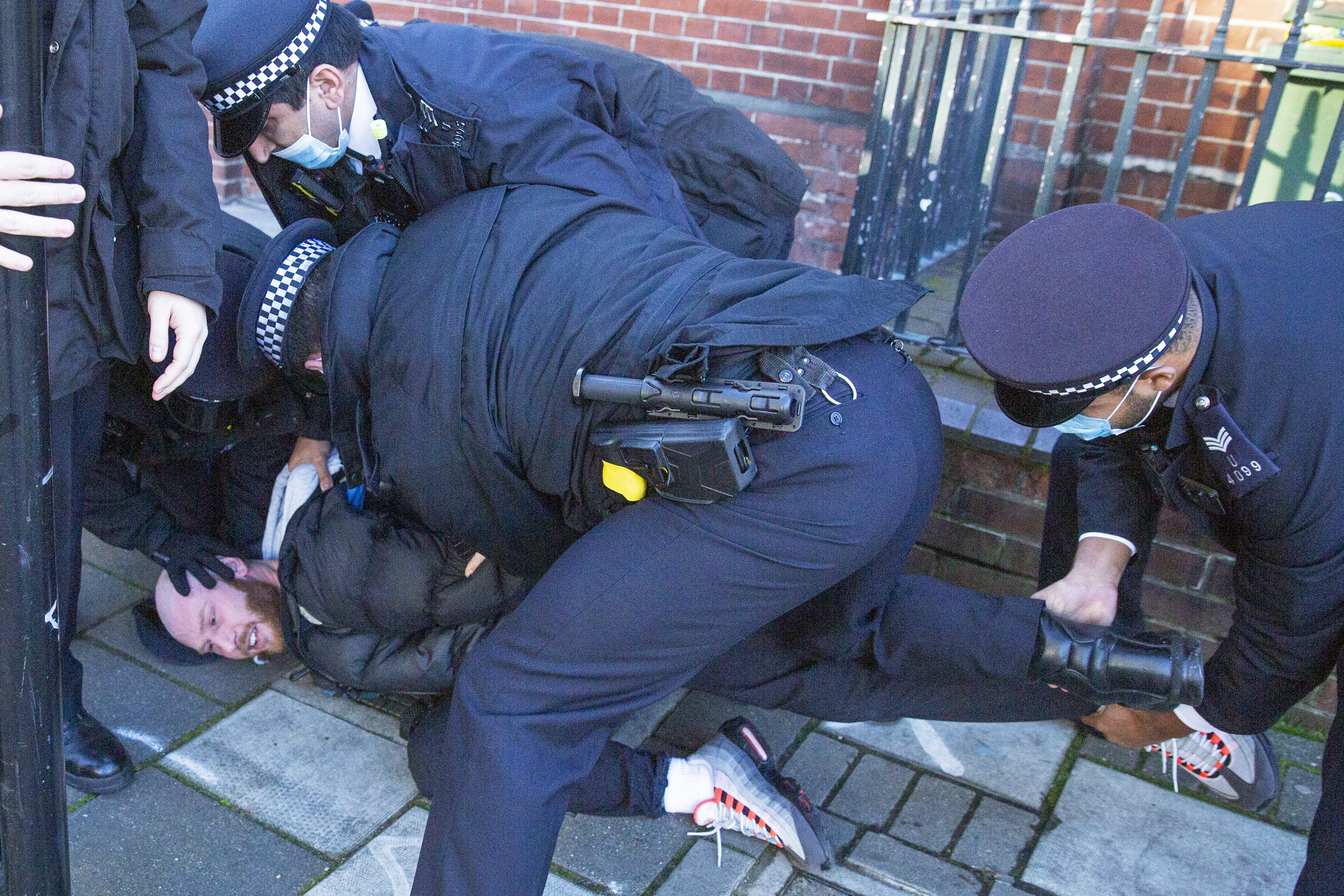 A man is held to the ground by masked officers in the Clapham Common protestCredit: © 2020 Joshua Bratt

And chaotic scenes unfolded in Clapham Common as police stepped in to break up the protests as the crowds started to chant “take your freedom back”.

But bystanders out for their daily exercise were left frustrated by the flouters – with one yelling “idiots” while a driver in a passing car called out: “There’s a pandemic going on you t***s”.

The protests, organised by Stand Up X, had been announced online with the message: “LET’S MARCH TOMORROW 9TH JAN IN THE THOUSANDS 12PM CLAPHAM COMMON.

The message was posted the same day that the UK saw its death toll rise by a grim 1,325 – the biggest rise since the pandemic first began.

Tempers ran high today as the protests broke out, with many fed up of the ten months spent in and out of lockdown.

But most brave Brits have stayed at home – following the government’s plea for one final push to stay socially distanced to stop the bug’s spread as the vaccine is rolled out.

In a statement, the Met Police said: “Gathering for the purpose of a protest is not an exemption to the rules. Those looking to gather today are urged to stay at home, or face enforcement action by officers.” 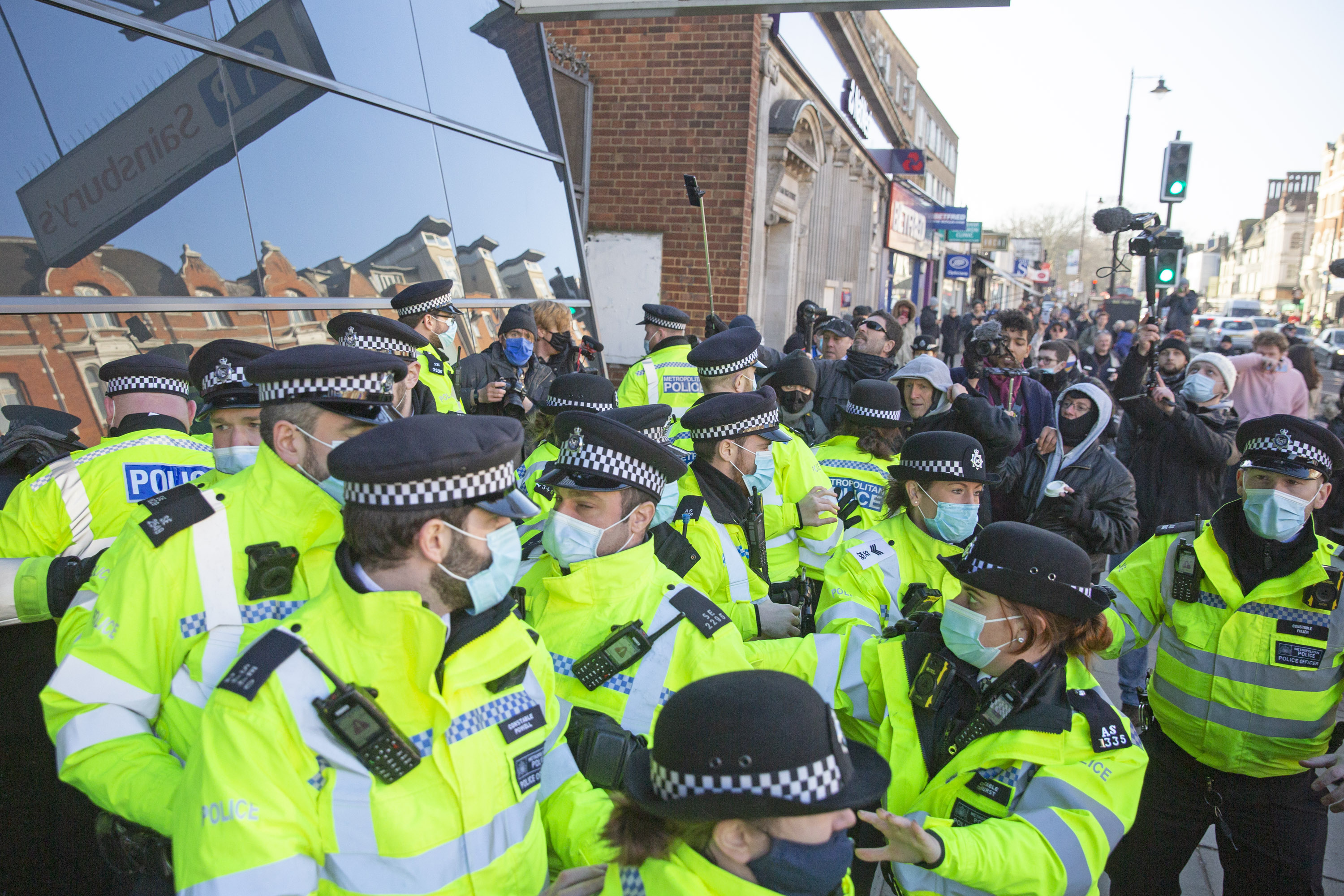 Police were forced to move in as the protesters gathered in the streets – ignoring guidance to keep safeCredit: © 2020 Joshua Bratt 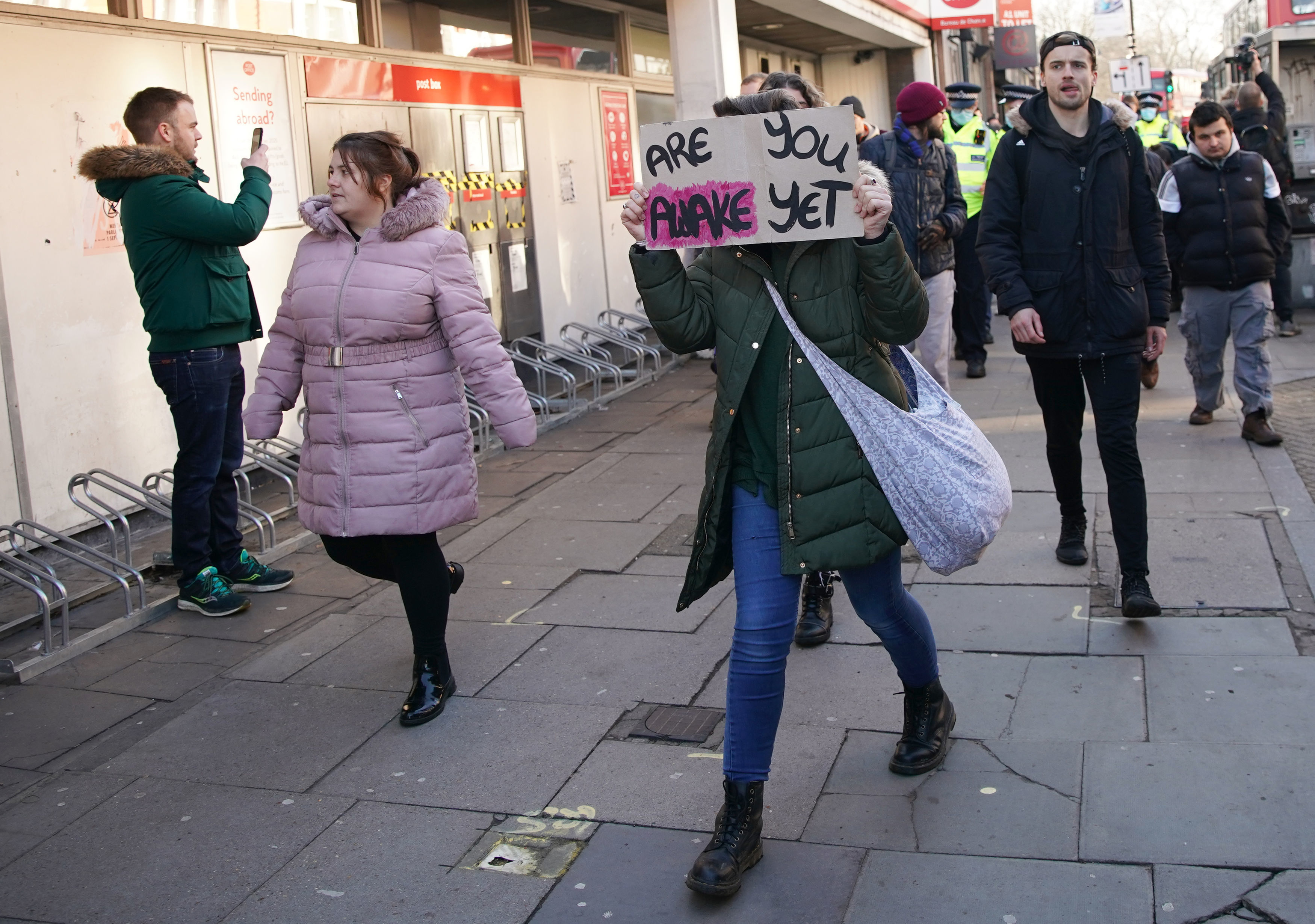 A woman walks through the street with a sign reading ‘are you awake yet’Credit: PA:Press Association 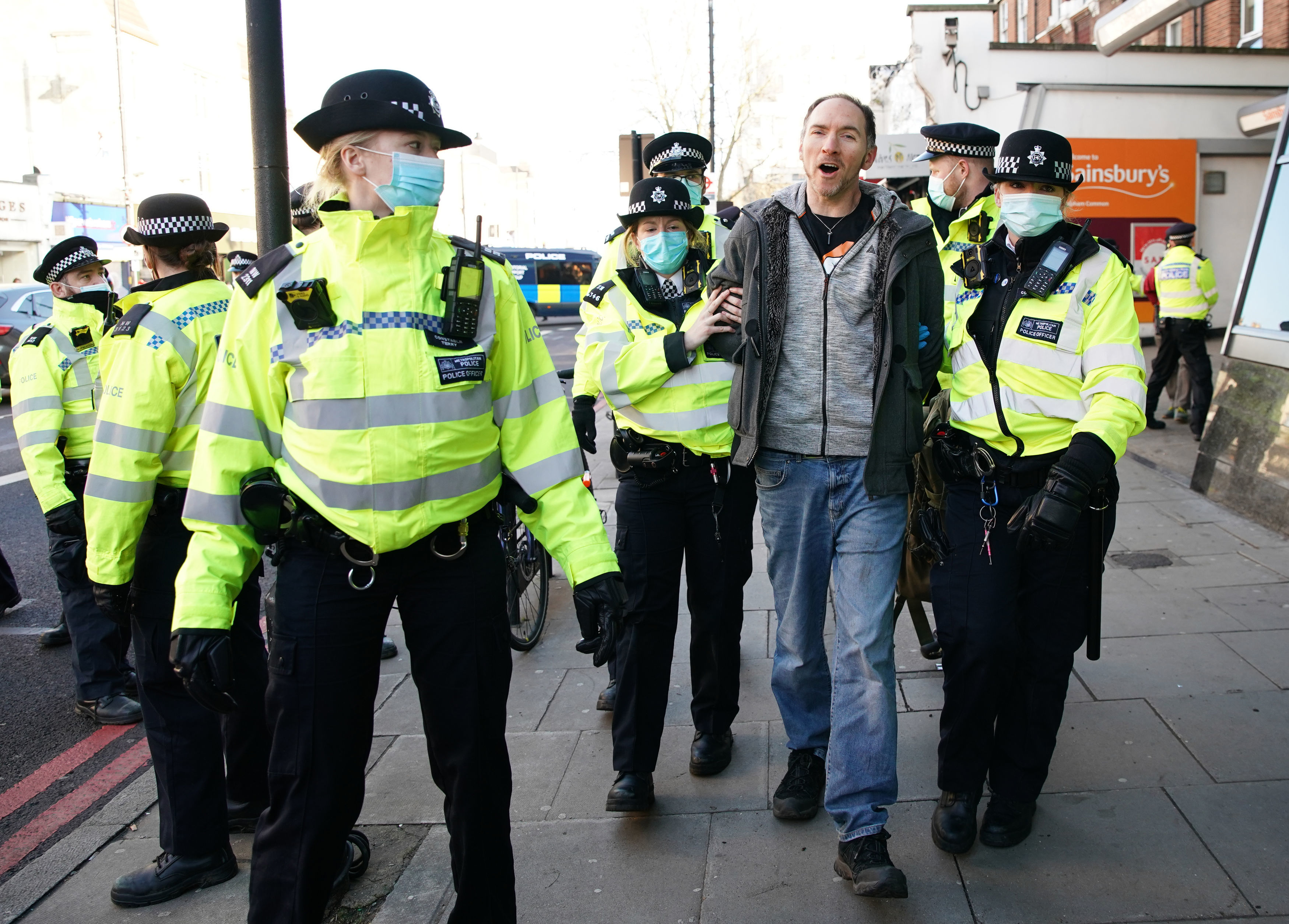 A man is led away from the protestCredit: Aaron Chown/PA 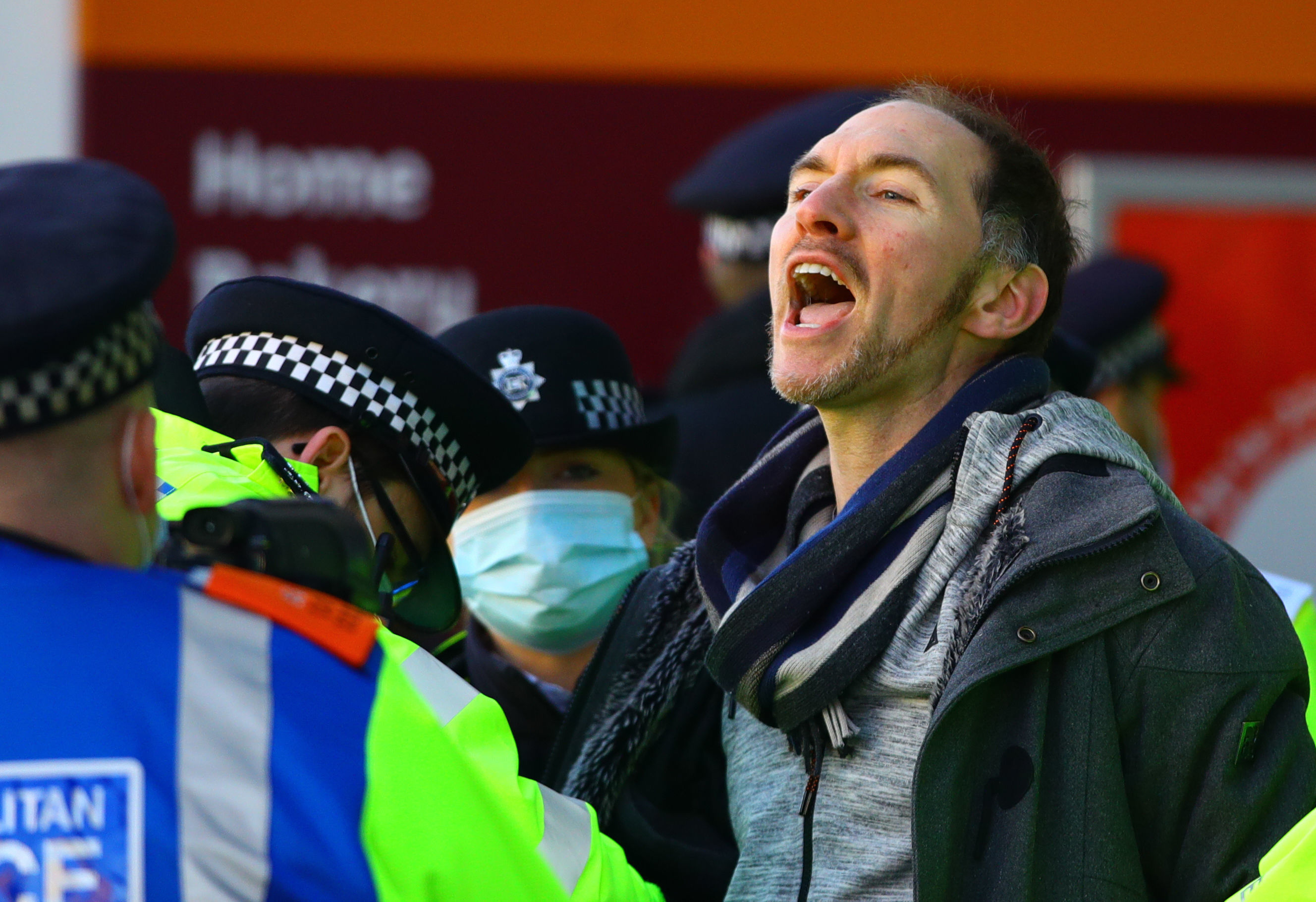 The man can be seen yelling during the protestCredit: Aaron Chown/PA 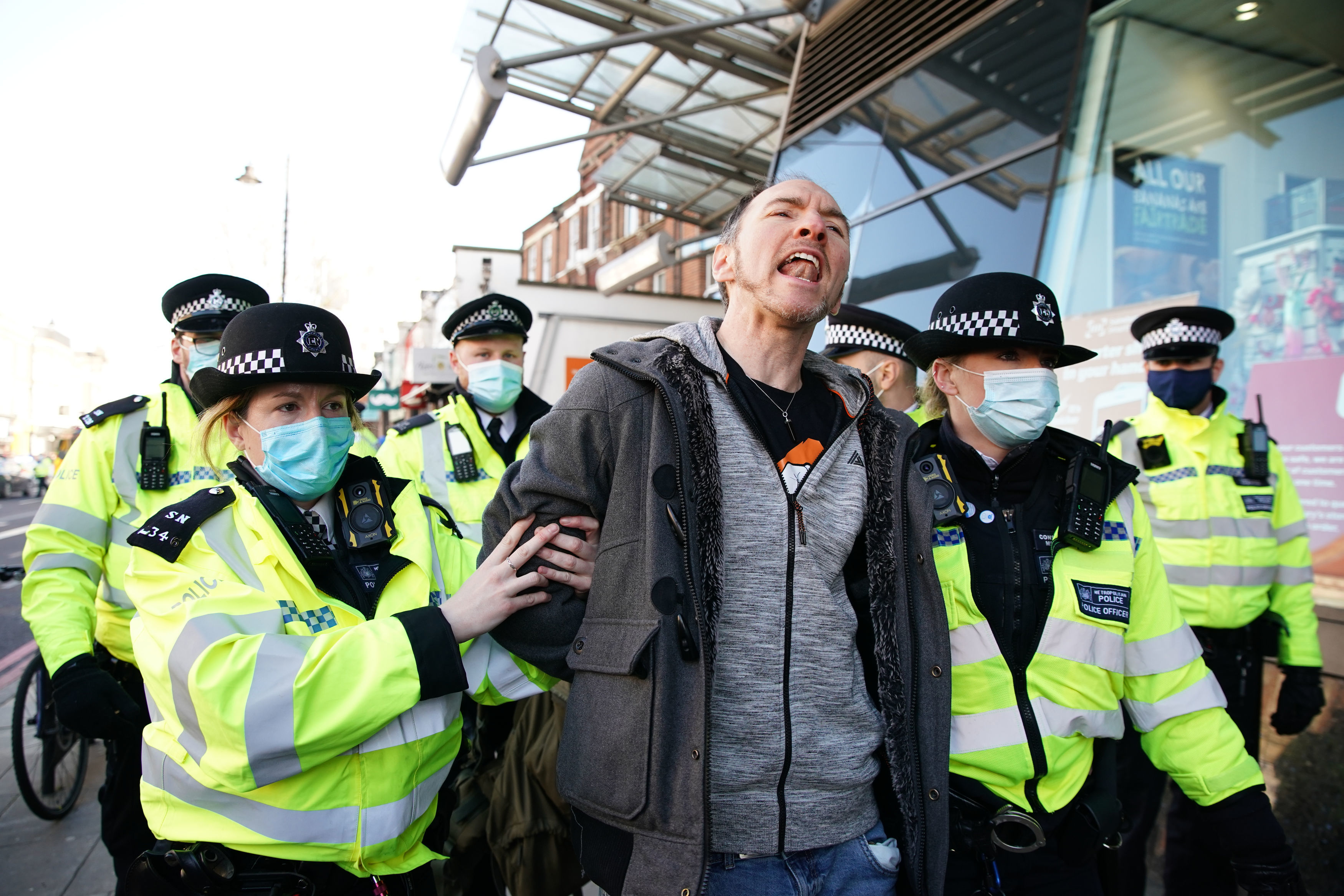 Five people were arrested after cops moved in this afternoonCredit: Aaron Chown/PA 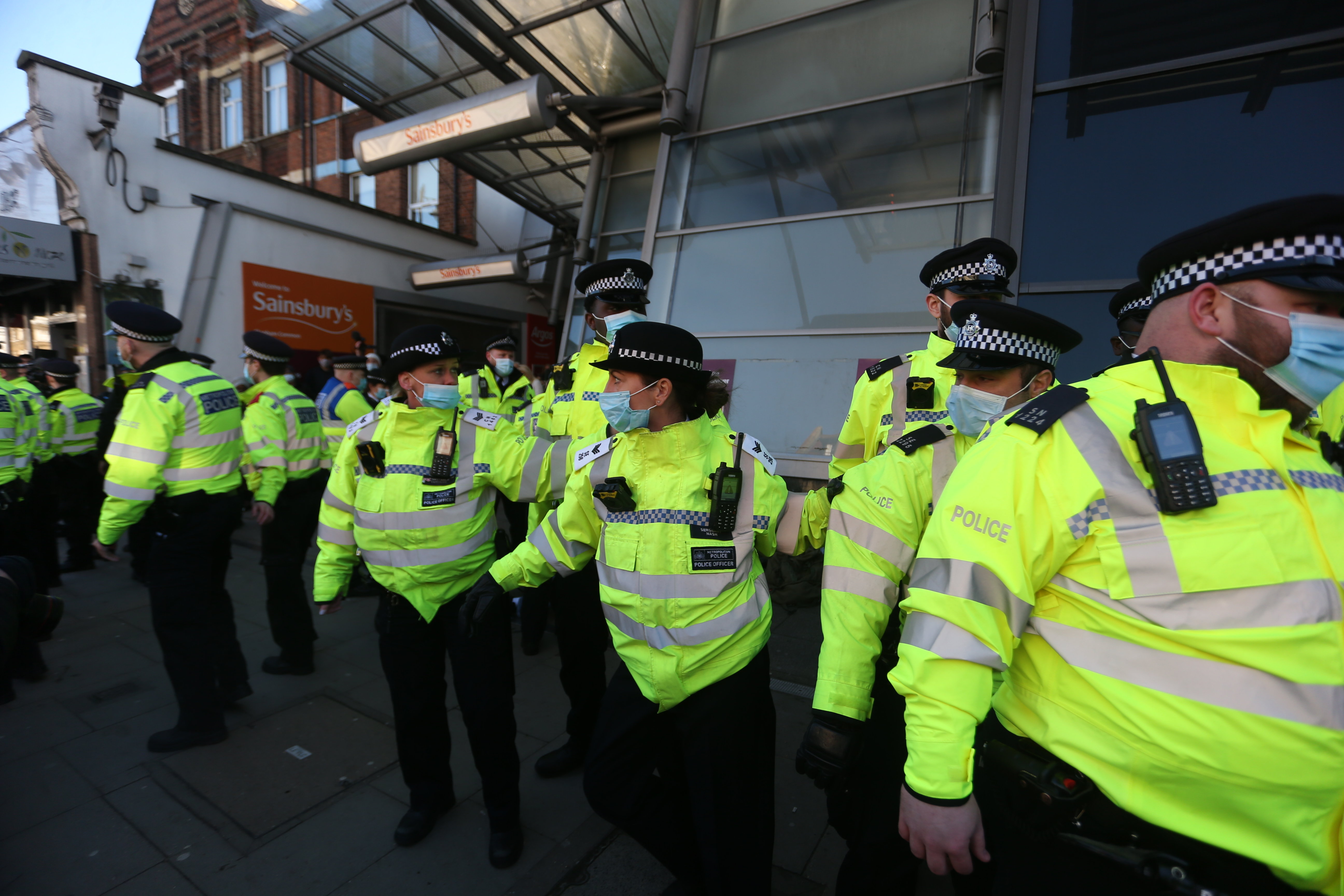 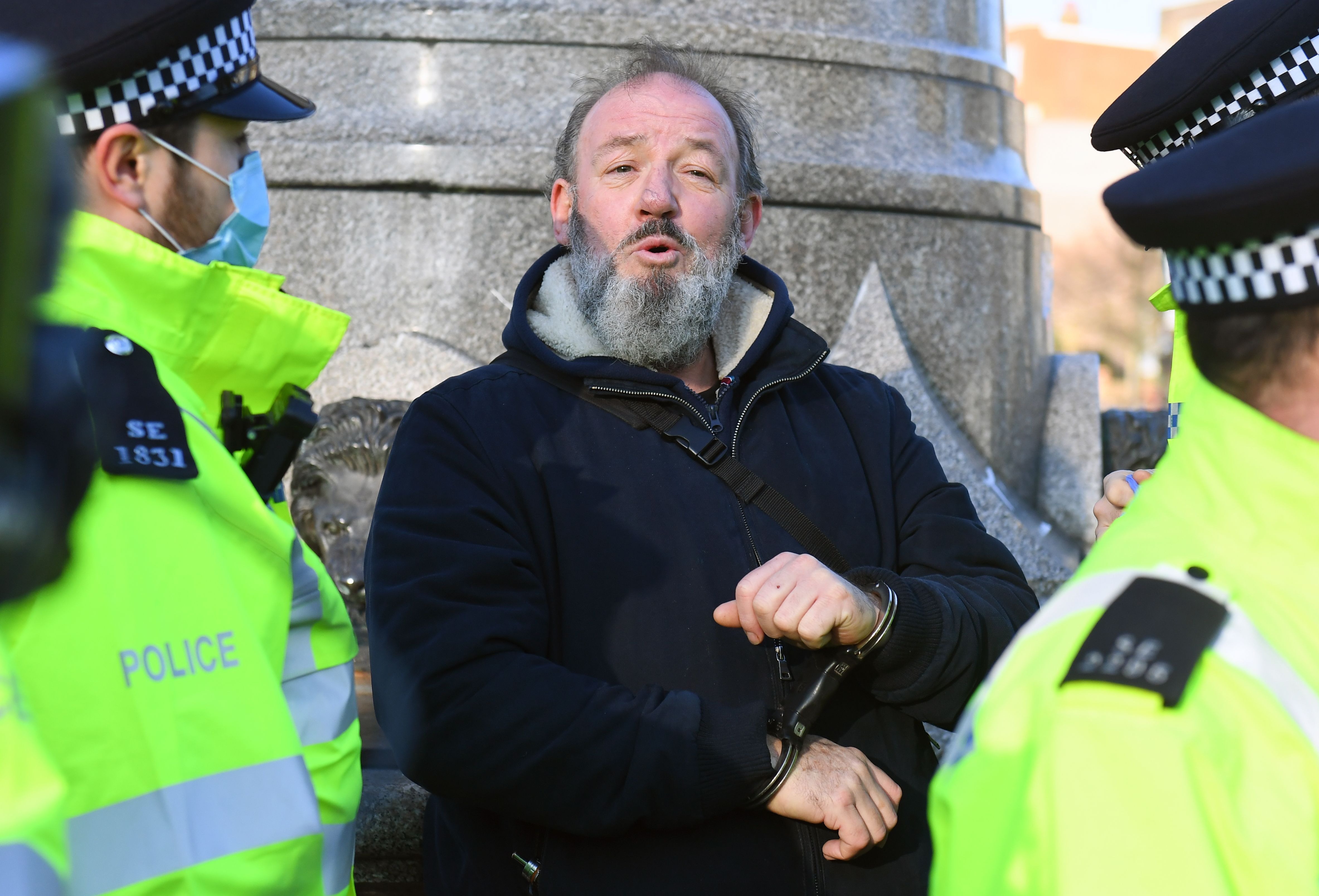 The protests unfolded just days into the national lockdown as the number of coronavirus cases continue to surgeCredit: Rex Features 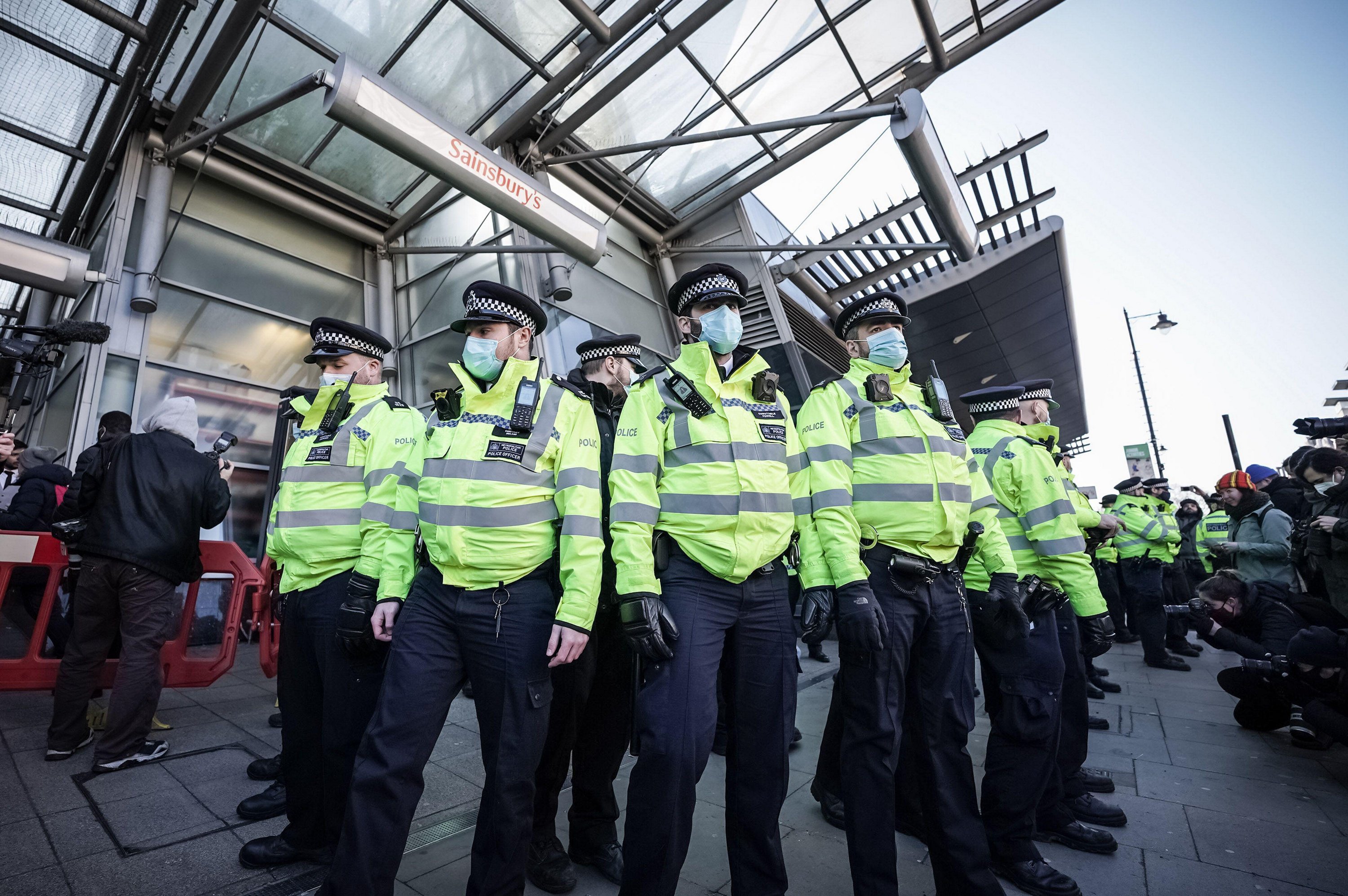 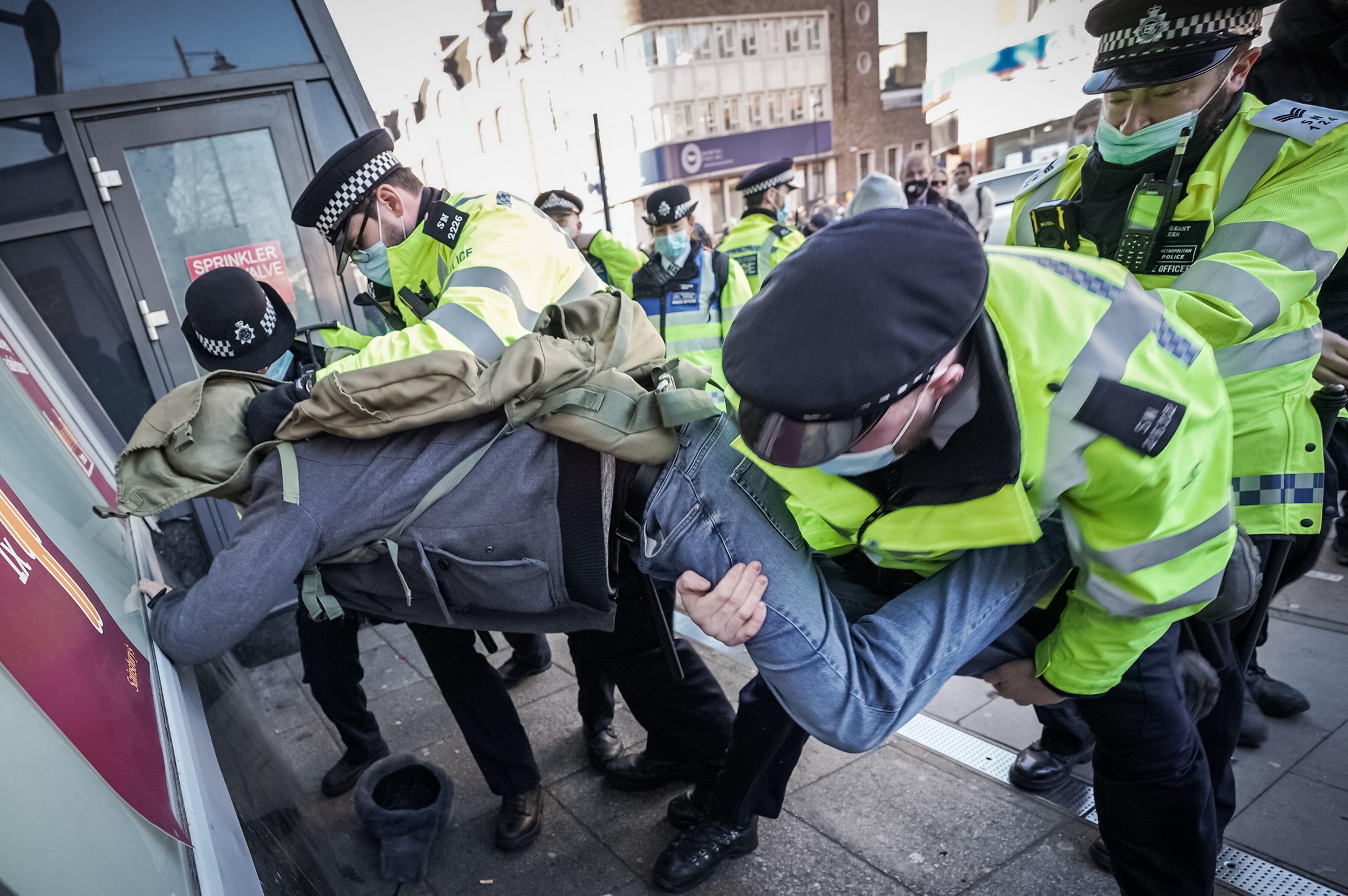 One man is taken to the ground by masked officersCredit: Alamy Live News 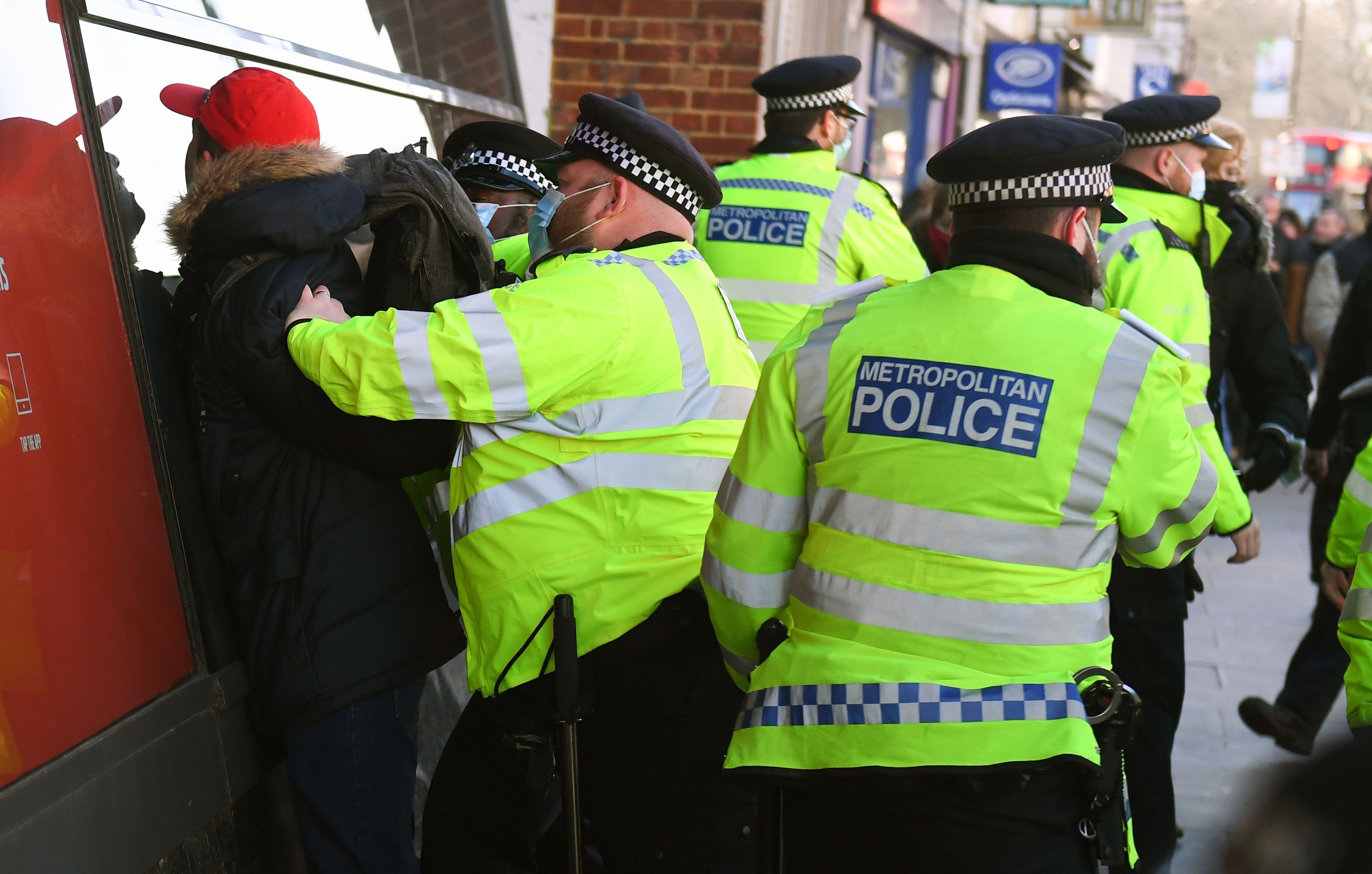 Cops have said they would continue to enforce the new rulesCredit: Rex Features 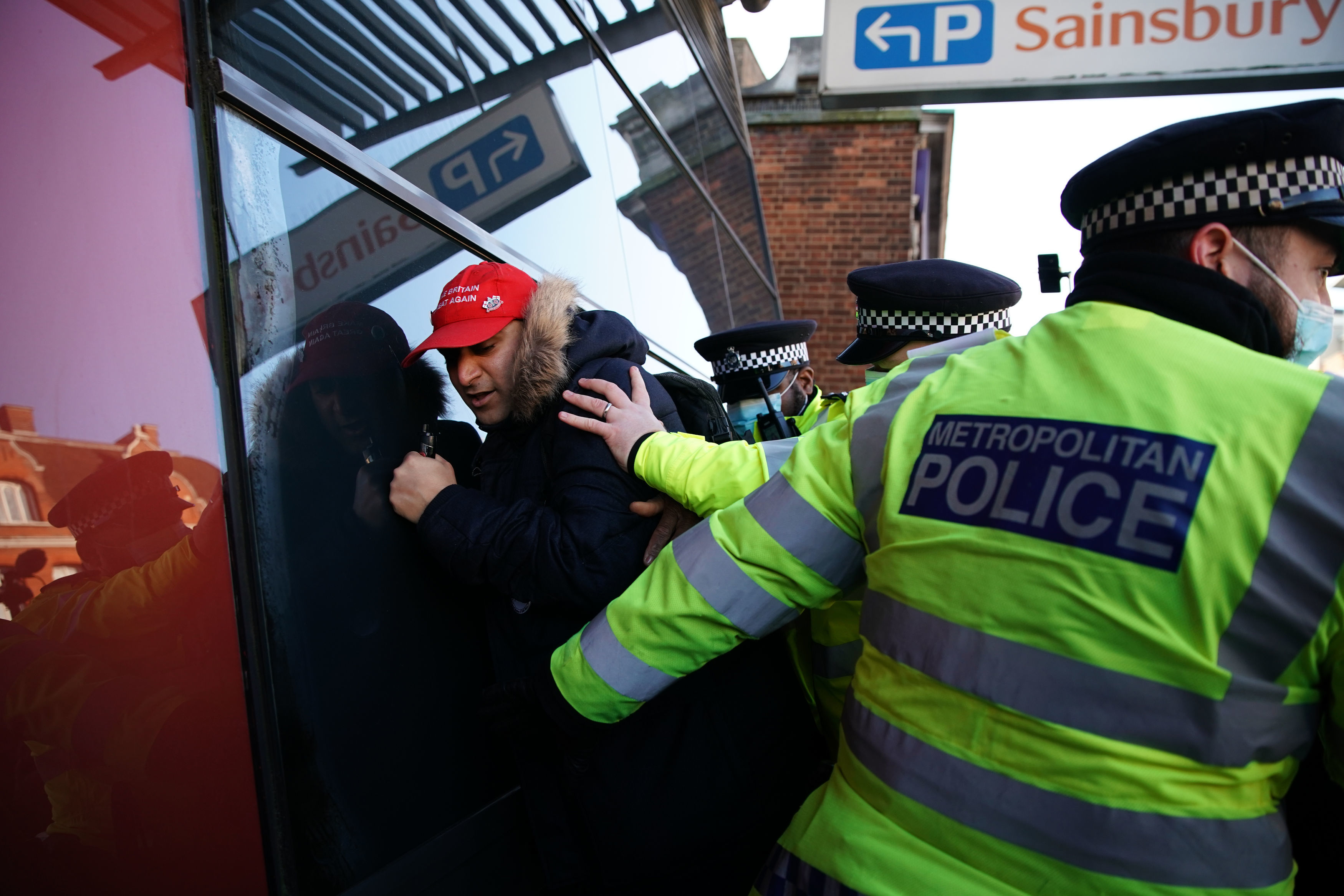 A man is held to the wall for breaking Covid restrictions – with one bystander yelling ‘idiot’Credit: Aaron Chown/PA 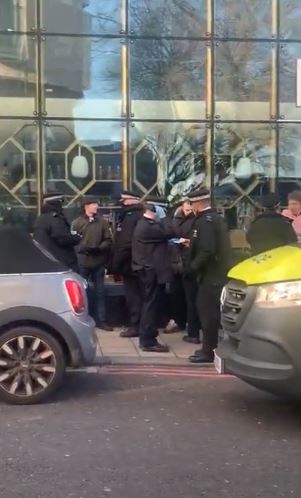 It comes as London yesterday declared a major incident with hospitals at breaking point.

London Mayor Sadiq Khan said on average, one in 30 Londoners have the disease – although in some areas of the capital it’s one in 20.

He said the NHS is “on the cusp of being overwhelmed” with more than 7,000 Covid patients in London hospitals — almost 2,000 more than the first peak last April.

The numbers of people on ventilators has almost doubled since Christmas day – with 47 per cent more patients in intensive care, the Mayor said.

And he warned hospitals will run out of beds in “in the next couple of weeks” unless the spread is slowed down “drastically”.

The R-rate has now hit 1.4 across the UK with the variant up to 74 per cent more transmissible.

Experts warn the R number must be below one for the pandemic to shrink.

But in a positive step, Britain yesterday approved a third Covid vaccine in a boost to efforts to beat the pandemic.

UK regulators have now recommended the use of the Moderna jab – which is 94 per cent effective in preventing coronavirus. 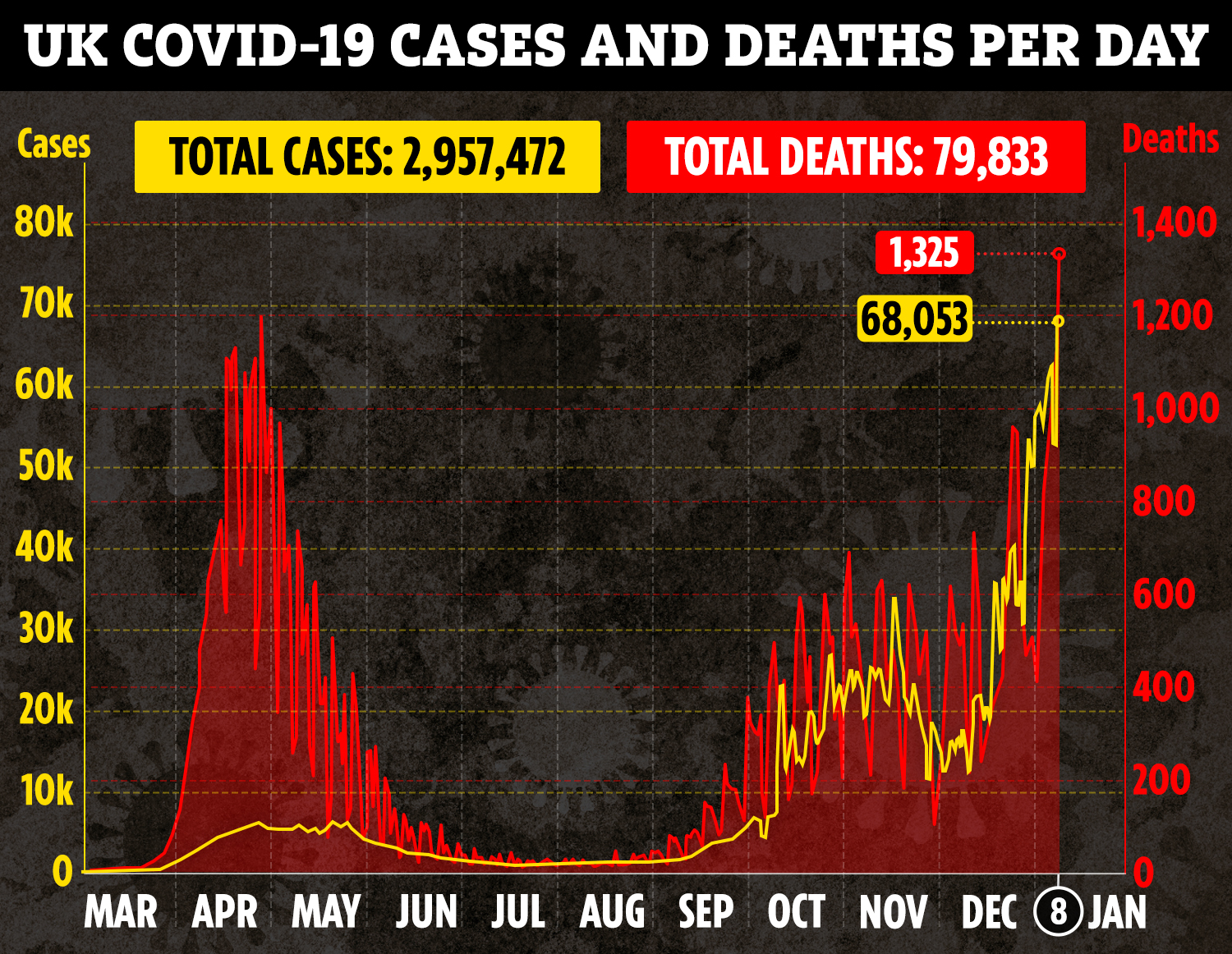 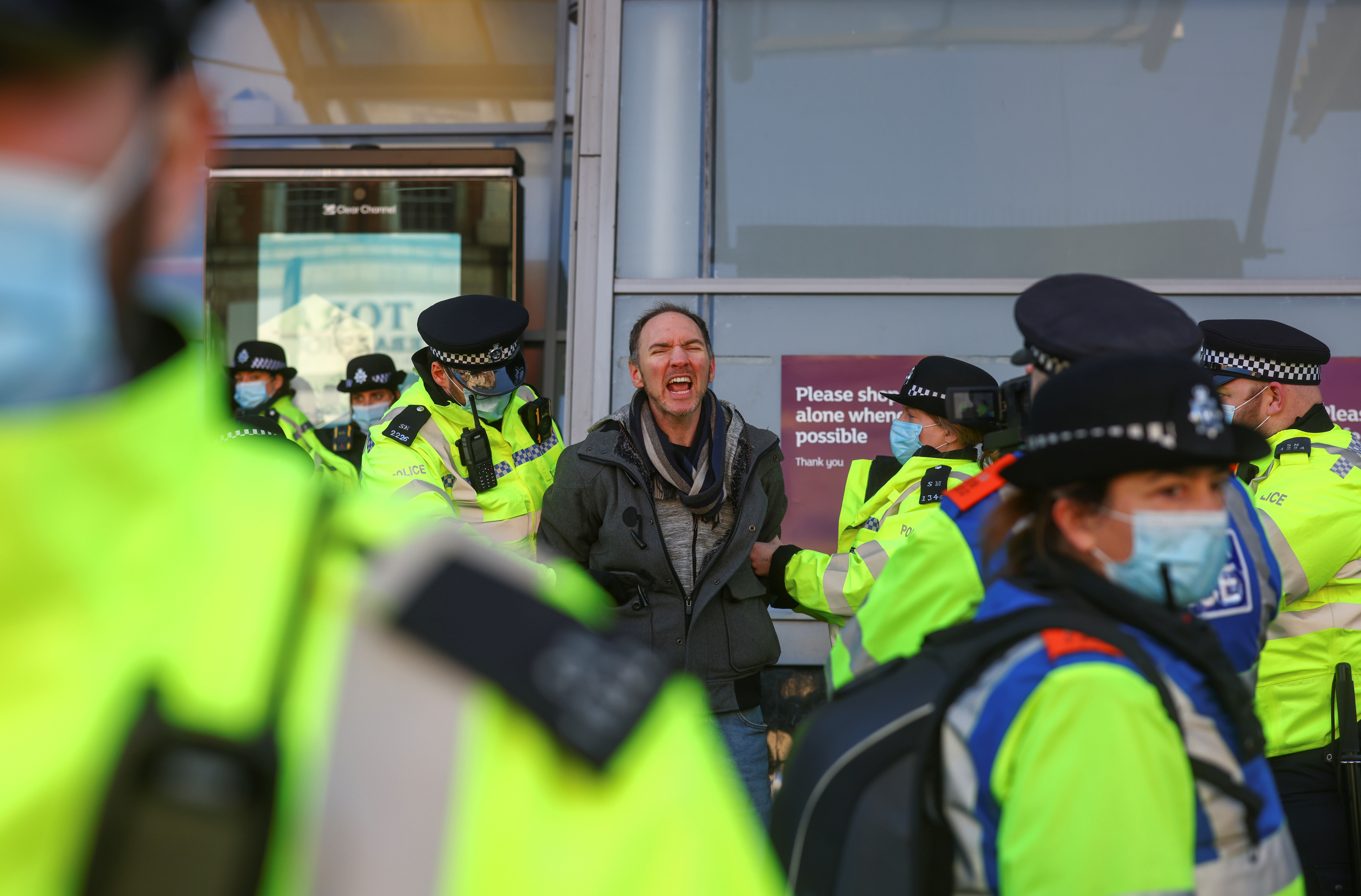 A man yells as he is arrested at the protestCredit: Reuters 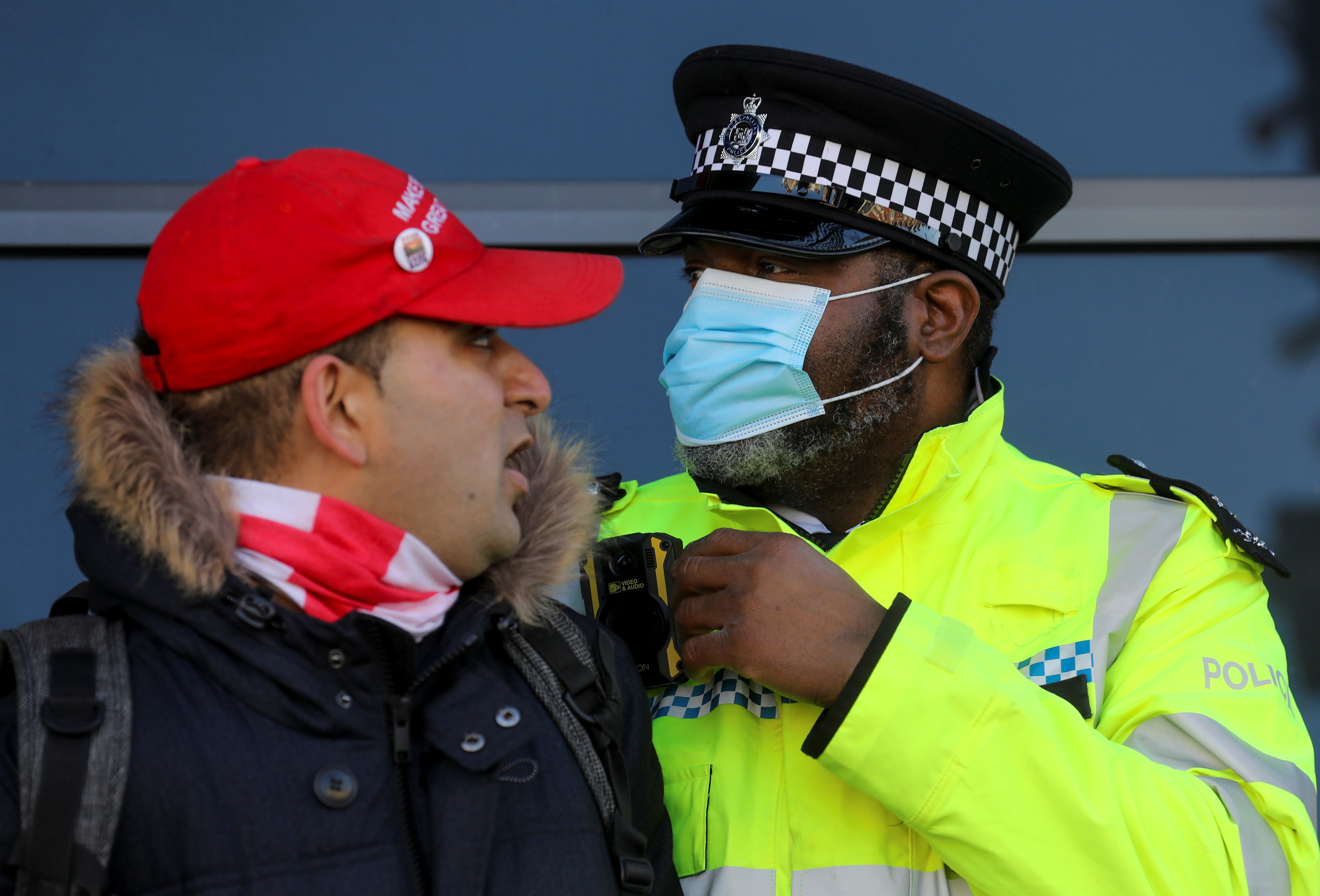 A masked officer leads away a man with the hat reading ‘Make Britain Great Again’Credit: Reuters