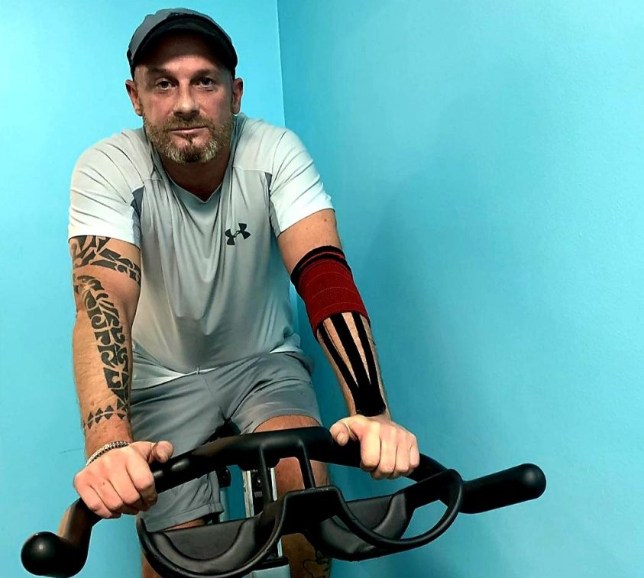 My family saw the change in me; I had a spring in my step and my outlook was brighter (Picture: Arron Murray)

I can’t remember how many times I’ve tried to take my own life, but I do remember the first.

I was 15 and ended up being rushed to hospital in the early hours of the morning, before being released again later that day. My mum was devastated. I felt terrible for upsetting her, but I still couldn’t explain why I’d done it.

Depression is like that; it’s a dark cloud descending over your mind, often for no reason.

When things were going well I was fun-time-Frankie, with a reputation as a ‘cheeky wee git’ – often the life and soul of the party. But when the dark days hit it felt like I was sliding straight into a black hole.

During my 20s I attempted suicide at least half a dozen times. I was given a diagnosis of depression but having a name for my condition didn’t make it any easier to find my way out of it.

I was in and out of hospital. The medical staff were always very kind, but follow-up support was limited.

By the time I’d reached my 30s I was struggling to keep a job – there were lots of days when I wasn’t mentally fit to work. I remember one time trying to hold down a position as a sales account manager and having to take myself off to the toilets to have time outs.

I desperately needed support but it was so hard to find.

I’ve lost count of the number of hours I’ve sat on the phone to various helplines. One afternoon I called four different support services, and they were either engaged or there was no one available to speak to me.

One charity said they could book me an appointment with a councillor but the waiting list was months long. When you’ve hit a crisis point you don’t have months to wait.

Then there’s the cost. NHS waiting lists are huge but if you go private it can cost around £40 to £60 per appointment, and if you’re struggling to hold down a job then it’s unaffordable. It’s a vicious circle.

Of course, I tried medication; I’ve been on so many different antidepressants but none of them seemed to help.

By the time I was 38 I was still struggling.

One particular day I was back at the GP – I’d seen him dozens of times by this point – begging for help again. He prescribed me a free 12-week exercise programme and gym membership. I didn’t really understand why he thought this could help me.

I wasn’t into exercise – the only running I’d consider doing was to the off-licence. Still, although I was nervous, I decided to give it a try.

When I first walked into the gym two weeks later, I instantly hated it. I had no idea how the machines worked and everyone else seemed to know exactly what they were doing. I was dressed in the wrong stuff – Bermuda shorts and a t-shirt – and felt embarrassed and awkward.

I didn’t dare leave, though, because I assumed the GP would be checking up on me. It sounds daft now but I thought I’d be in trouble if I walked out.

I had an induction with a personal trainer, who showed me the equipment and wrote me a personalised plan. I started on an exercise bike because it was something I recognised.

I began going two or three times a week, working out for an hour at a time. And after about three weeks, I suddenly realised I was starting to enjoy it. Instead of dreading my sessions, I was looking forward to them.

Exercise was giving me an outlet and something to focus on; the gym was a place where I found headspace. I joined a few classes and started chatting to people, having a bit of craic.

Six months later I was attending all kinds of classes, from yoga to spin, and I’d created a whole new social circle.

My interest in exercise had been piqued. And with my mood and motivation levels higher than ever, I decided to look into PT qualifications. I wanted to know more about why I was feeling so good.

I soon took my Level 2 Fitness Instructor and Level 3 Personal Trainer qualifications, becoming a PT. I was determined to show other people what exercise could do for them.

My family saw the change in me; I had a spring in my step and my outlook was brighter. I was finally starting to look after myself.

I vividly remember, after two years of going to the gym, when I was training for my Level 3, my dad telling me he was proud of me. It’ll always stay with me; it was one of the last things he ever said to me.

In July 2018 we were hit by heartbreak. Dad had always loved his cars and he was killed in a tragic accident while working on a vehicle. The day of his funeral knocked me sideways and in the days of grief that followed, I made my final suicide attempt. 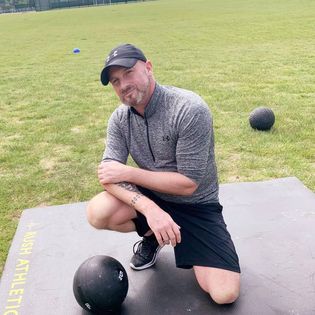 Depression makes you selfish but you can flip the coin (Picture: Arron Murray)

When I survived, it was the moment that I decided enough was enough. Dad wouldn’t want me to spiral into darkness, so I focused on my training. I went back to college to train for a diploma in exercise referrals for fitness professionals.

I was seeing guys coming into the gym with the same issues I had when I started, so I was on a mission.

Getting that qualification will mean that as a PT I can accept GP referrals. I’m aiming to sit my final exam this spring and then I’ll have come full circle, going from the person being prescribed exercise to the one able to provide support.

Depression makes you selfish but you can flip the coin. I’ve discovered I really enjoy helping people and it helps me get out of my own head, too. During the pandemic, I’ve been running PT sessions in my local park whenever possible. I have nurses, health care staff, people working from home or homeschooling, all coming together in the fresh air to give themselves a boost.

I still have my dark days; depression isn’t a thing that just goes away. But I know now how to help myself and I feel confident I’ll never hit rock bottom again.

I’m telling my story in the hope that it might help someone else out there. Poor mental health, especially in men, is an epidemic. Just look at the statistics: in 2019 there were 4,303 male deaths due to suicide, the most in any one year since 2000. It’s a tragedy.

My advice to anyone who is struggling is to get out in the fresh air and get moving. If possible, do it with company; a big part of exercise for me is being around other people.

Reach out and talk to somebody – don’t try to suffer in silence. We really are all in this together.

As told to Jade Beecroft