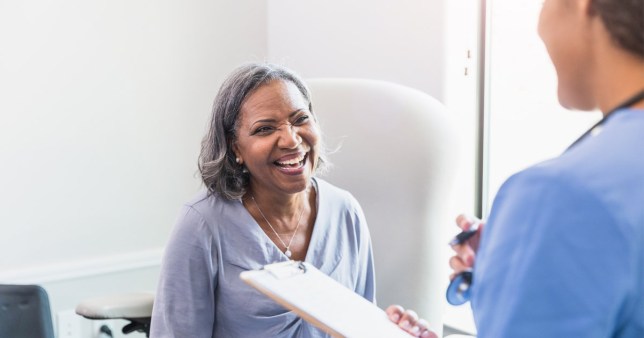 Looking on the bright side isn’t easy, and the last year has been a real test of our ability to do so.

But learning to laugh in the face of adversity can be of great help to our mental wellbeing.

A report looking at humour conducted by Walker’s crisps found that the average adult spends less than two hours in an entire year laughing – and naturally that has decreased further over the pandemic.

In an experiment on people across the UK by neurologist Dr Dean Burnett, he monitored how people communicate and what energy they give off after having laughed against not having even a brief chuckle.

Those who were made to laugh were found to feel less stressed, could notice a silver lining, felt positive, and 88% said they could ‘face the day better’.

86% felt that laughing about a stressful situation allowed them to handle it better.

Dr Burnett said the research shows that ‘the more you laugh, the better you feel overall.

‘And we’re not just talking about hysterical laughter. Humour – to whatever extent – has the ability to instantly change lives in that moment, and have a positive effect on both mental and physical wellbeing.

‘From a wry smile to tears rolling down your face, people simply aren’t laughing enough.’

Sharing his top five tips for building that muscle to laugh during adverse situations, Dr Burnett says there are ways to ‘reframe’ things.

Our immediate responses to ‘bad’ things tend to be negative or panicked, with perspective only kicking in later.

‘When something stressful happens, try to avoid reacting right away.

‘The ‘Count to 10’ cliché is perhaps over-used, but it can be helpful to not respond with your immediate impulse and give your higher (but slower) brain regions a chance to get involved,’ he says.

Identify the true cause

If you can recognise your reaction to a situation is more heightened than usual, think about what came before.

‘We tend to react more negatively to stress if other things have already stressed us out.

‘Where possible, ask yourself if the thing you’re frustrated at is genuinely that bad, or actually more a “final straw” situation,’ Dr Burnett says.

We often see the funny side to things when confiding in a close friend who there’s good banter with.

Dr Burnett suggests: ‘Think to yourself, how would you tell a friend about what’s happened to you?

‘We typically put an amusing spin on anecdotes, practicing them ahead of time can help you see it that way.’

Try out a chuckle

Think of the chain reaction you want to create in your mind – and that might mean forcing out a laugh to get started.

‘Laughing openly at the amusing aspects of a stressful experiences can make them seem more humorous.

‘Even if it’s just a chuckle, kick-starting the humour response can give it more sway over how you react to things,’ he says.

Vent to see the funny side

Sometimes a negative situation feels funnier once we rant about it and release the tension.

Dr Burnett says: ‘Venting about a stressful situation can be cathartic, but following it up with laughter at the amusing aspects can stop you dwelling on the negatives long-term.’

Of those surveyed, 42% couldn’t remember when they last had a ‘good’ laugh and 31% said their current lifestyle makes it harder to look for the positive side to situations.

‘Sometimes it’s hard to see the funny side, and it’s a very difficult time right now.

‘Simply pledging to try and see the positive or funny side to everyday situations like missing the bus or accidentally hitting “reply all” on a work email, will have a powerful instant impact on your mental and physical wellbeing,’ Dr Burnett added.