Holidaymakers from the US and UK have been warned they could be caught in the crossfire on the beaches of Cancun and Playa del Carmen after a shocking spike in violence.

Mexican soldiers patrol a tourist beach in Cancun last month after a spate of murdersCredit: Reuters 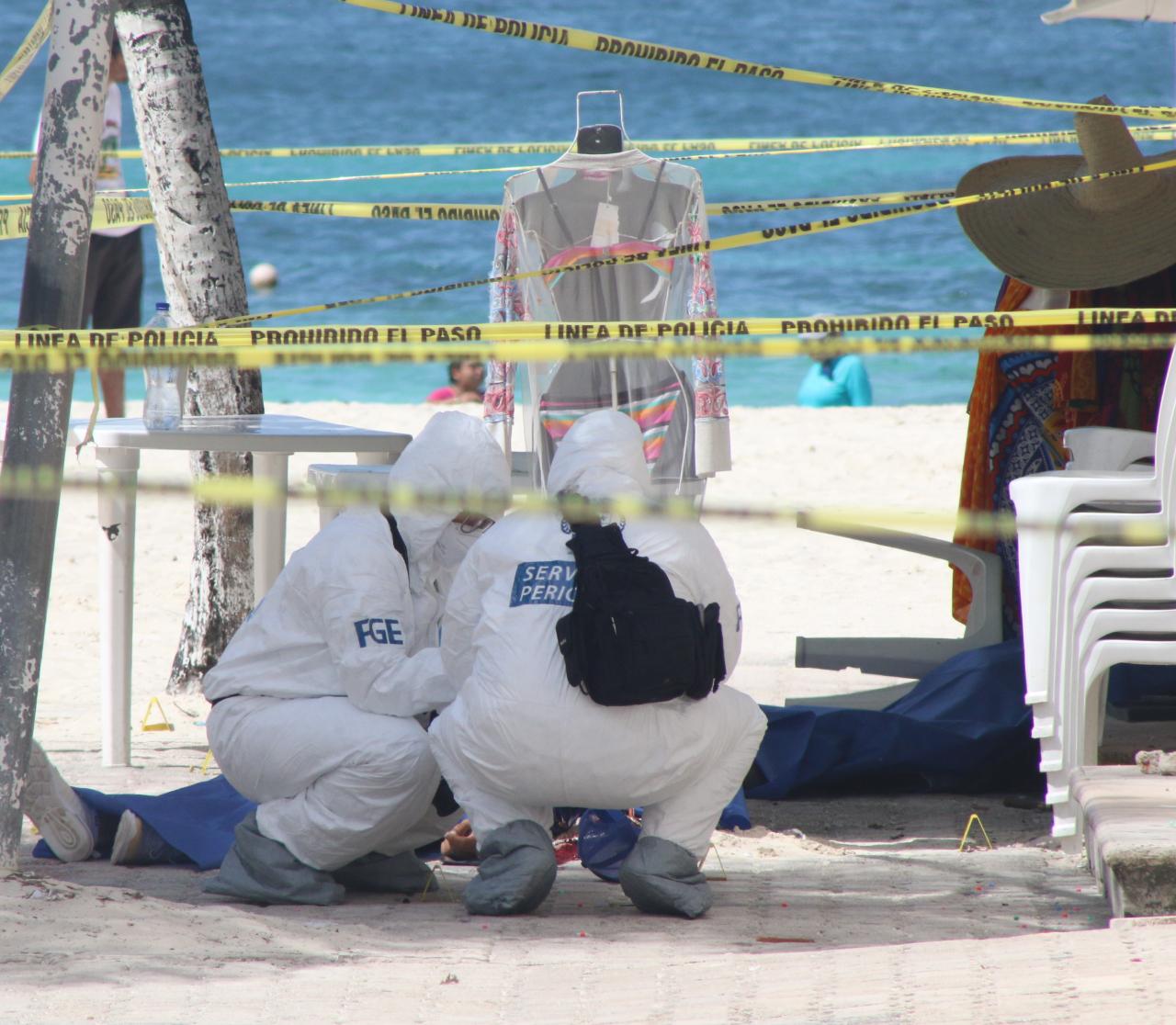 Forensics officers at Cancun’s Tortuga Beach where a US tourist was wounded in a cartel shooting in JuneCredit: Cancún Urbano

Mobsters have previously kept their gun battles well away from the hotels on Mexico’s sun-soaked Mayan Riviera, fearing it would be “bad for business”.

But bloodthirsty kidnap and torture gangs of the ultra-violent Jalisco New Generation Cartel are said to have ripped up the code as they seized new turf.

And the past months have seen an alarming spike in shootings close to the resort hotels that draw 12million holidaymakers a year.

Last month two Canadians were murdered by a hitmen who had a wristband to get past security at the Hotel Xcaret resort, south of Playa del Carmen.

And in November four Americans were injured in a deadly shootout between rival dealers on a beach next to the five-star Hyatt Ziva Riviera in Cancun.

That came a fortnight weeks after two women — a California travel blogger and a German tourist — were killed in crossfire between rival gangs at a resort bar in Tulum.

Tourism chiefs fear the bloodshed means the Quintana Roo region will lose its reputation as a safe haven for both package holiday families and Spring Break partygoers.

The governments of the UK, US, Australia, New Zealand and Germany have all issued travel warnings about the resorts.

Experts say it is the visitors themselves who are driving the gang war — as they fuel rising demand for illicit drugs.

Unlike most countries, Mexico has imposed no pandemic travel restrictions.

That has made it particularly attractive for those seeking an escape from nightlife shutdowns at home.

Music festivals and parties dubbed “plague raves” have been in full swing all winter, leading to Cancun airport’s second busiest ever day on the Saturday before Christmas.

“Working at the hotels here, you get used to being asked to help get drugs,” a concierge at a a well known hotel in Tulum told the Washington Post.

“You know, coke, MDMA, ketamine, all of it. We make the introductions to dealers because that’s what the guests want.”

State police chief Lucio Hernández Gutiérrez said: “A major reason the cartels are here is because of the large demand for drugs, especially among tourists.

November’s gun battle in Cancun erupted after hotel guests asked where to buy cocaine and the staff called a number of dealers, police alleged.

Two other factors are also driving the recent bloodshed, according to a Global Risk Insights report.

One is the state’s strategic position in global smuggling routes.

The dead Canadians were involved in trafficking drugs and weapons internationally and were targeted for assassination over a debt, police said.

The gunman had checked himself into the luxury hotel as a guest in a brazen public hit that was planned months before.

The other factor is the eruption of a turf war following the break-up of the Zetas Cartel which used to dominate.

Two of Mexico’s most powerful syndicates – the Sinaloa Cartel and the Jalisco New Generation Cartel – sent battalions of foot soldiers from the other side of the country.

At least eight other groups are also battling for control, turning tourist hot spots into a warzone littered with corpses.

In 2018 the US issued a travel warning after Cancun saw 100 murders in three months, including nine in 36 hours.

Hoteliers have previously been able to assure guests that all the violence takes place in poor neighbourhoods well away from tourist enclaves.

What has alarmed operators and the police more recently is how the bloodshed has spilled over into the heart of busy resorts.

Caught in the crossfire

In 2019 Brits on a a Thomas Cook holiday feared a Tunisia-style terror attack as a lifeguard was gunned down at the Grand Bahia Principe near Tulum.

Last June a US tourist in a bikini was wounded by a stray bullet as assassins on jet skis opened fire within the hotel zone of Playa Tortugas in Cancun.

In July, Texas firefighter Elijah Snow was found dead dangling from a window during a tenth wedding anniversary break at an all-inclusive resort on Cancun’s beachfront.

His family said he was kidnapped inside his hotel and murdered.

In October, a gun battle erupted at a tourist bar and restaurant off Tulum’s main strip when a gangster reportedly recognised a rival.

Instagram influencer Anjali Ryot was killed along with German tourist Jennifer Henzold. Two other Germans and a Dutch tourist were wounded.

The German Foreign Office warned at the time: “If you are currently in the Tulum or Playa del Carmen area, do not leave your secured hotel facilities.”

Los Pelones are said to be enforcers for the Gulf Cartel, which is engaged in a ferocious war with the Jalisco mob who are famous for dismembering victims.

In December five gunmen on jet skis peppered a Cancun beach with bullets outside the four-star Oasis Palm, sending tourists running for cover.

It is thought they were targeting dealers who ply their trade on the strip.

Around 1,500 National Guard troops have been deployed to guard beaches and concert venues as part of the newly formed Tourist Security Battalion.

Experts said although they may reassure visitors, they will do little to stop the wave of carnage blighting the once-tranquil oasis. 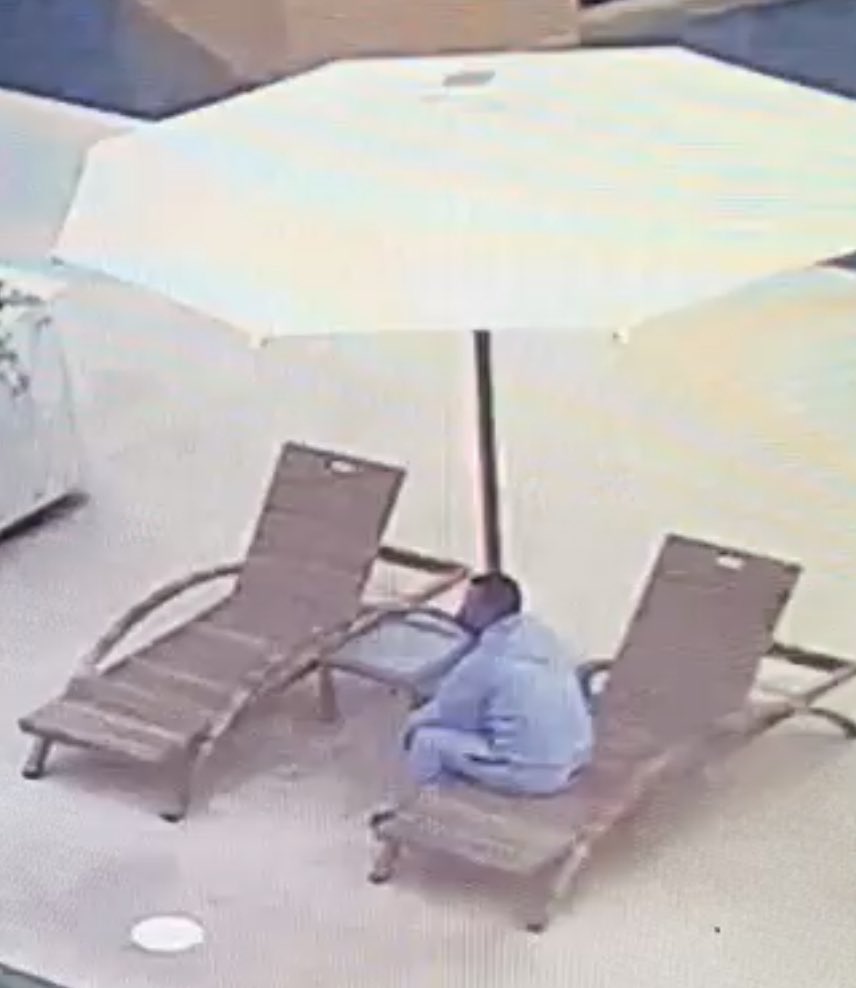 CCTV of a suspected assassin at the XCaret Hotel near Playa del Carmen before two Canadians were shot dead and a woman was wounded in JanuaryCredit: Twitter/Lucio_HG 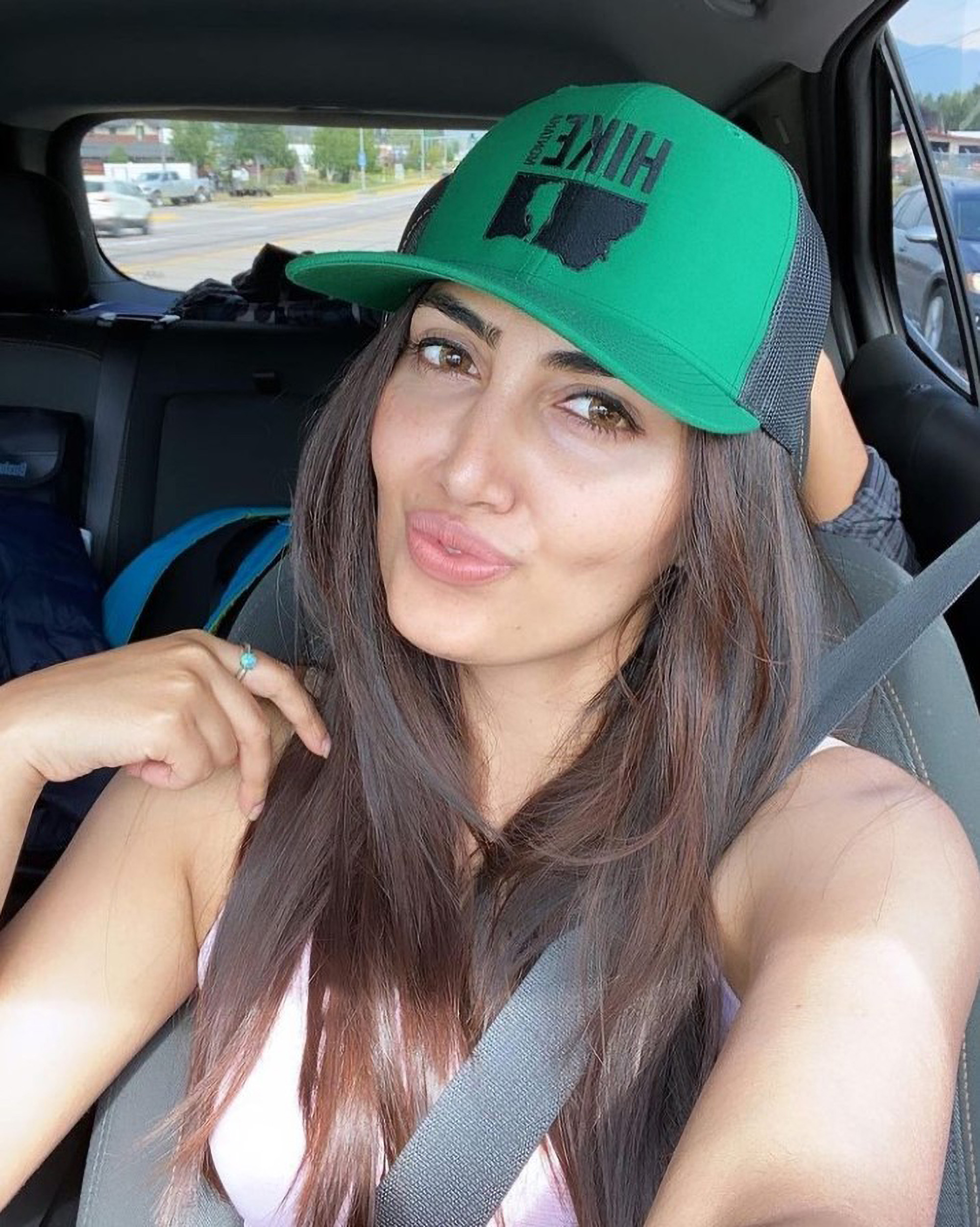 Anjai Ryot from California was killed in a cartel gun battle in Tulum in OctoberCredit: Newsflash 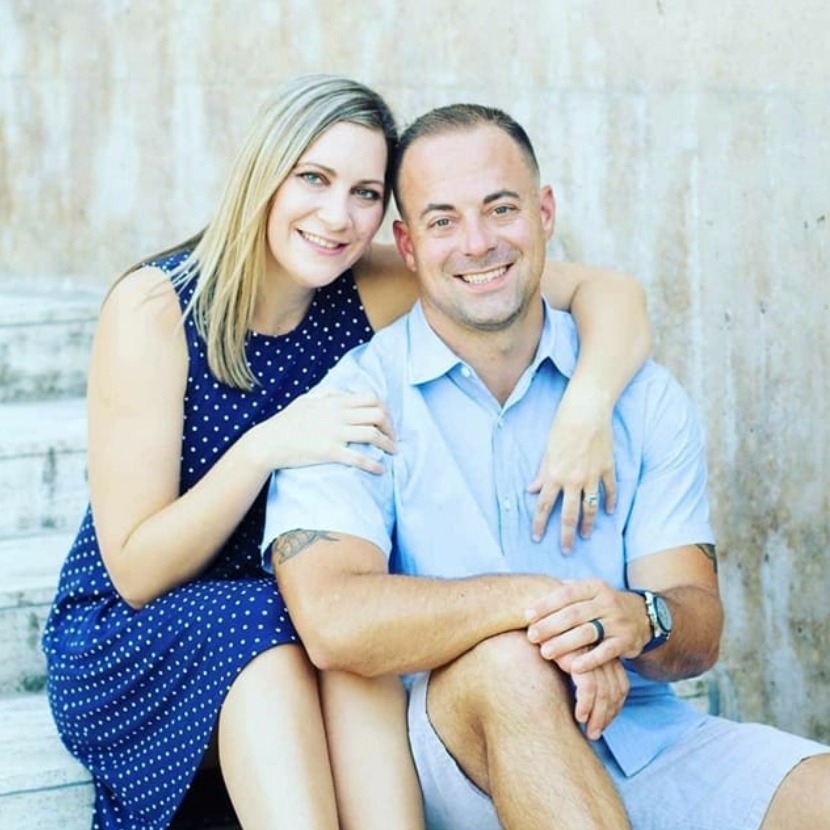 Texas firefighter Elijah Snow was kidnapped and murdered at a hotel in Cancun, his family saidCredit: Facebook 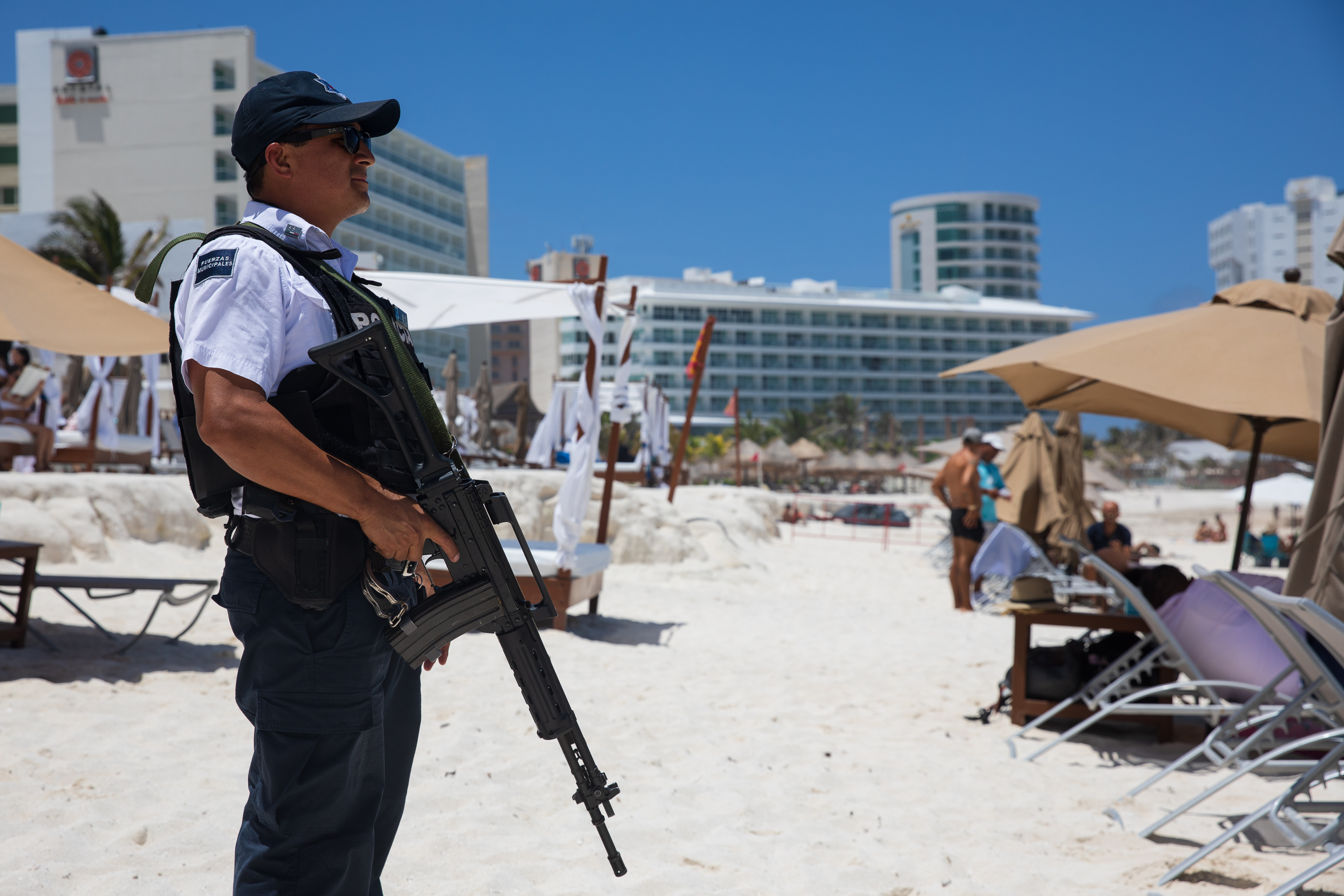 Armed cops on the beach as murderous gangsters wage bloody war at tourist enclaves on the Mayan RivieraCredit: James Breeden – The Sun 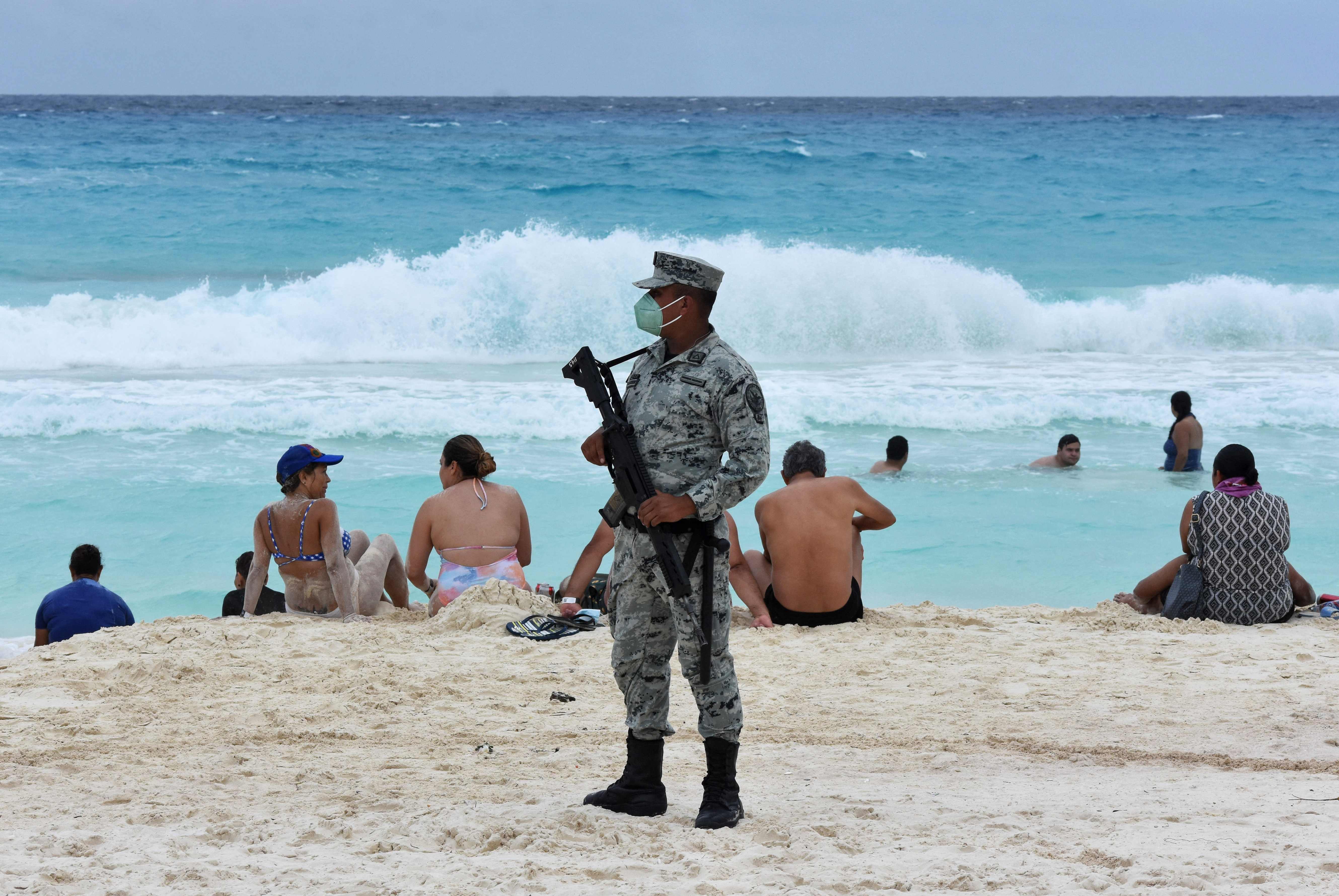