A HEALTHY marathon runner nearly died of a blood clot after doctors mistook her symptoms for Covid-19.

Becky Read, 28, went to the doctors complaining of breathlessness and muscle pain at the end of April and was told to get a Covid test. 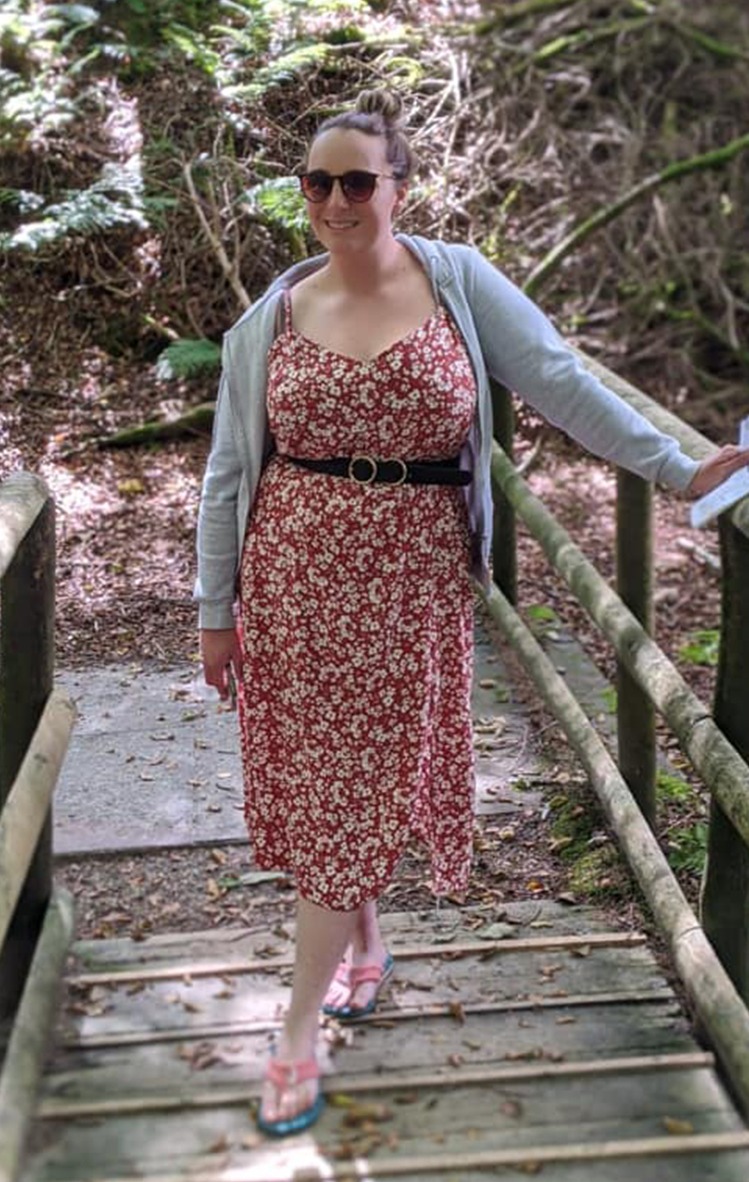 Becky Read, 28, nearly died of a blood clot after doctors mistook her symptoms for Covid-19 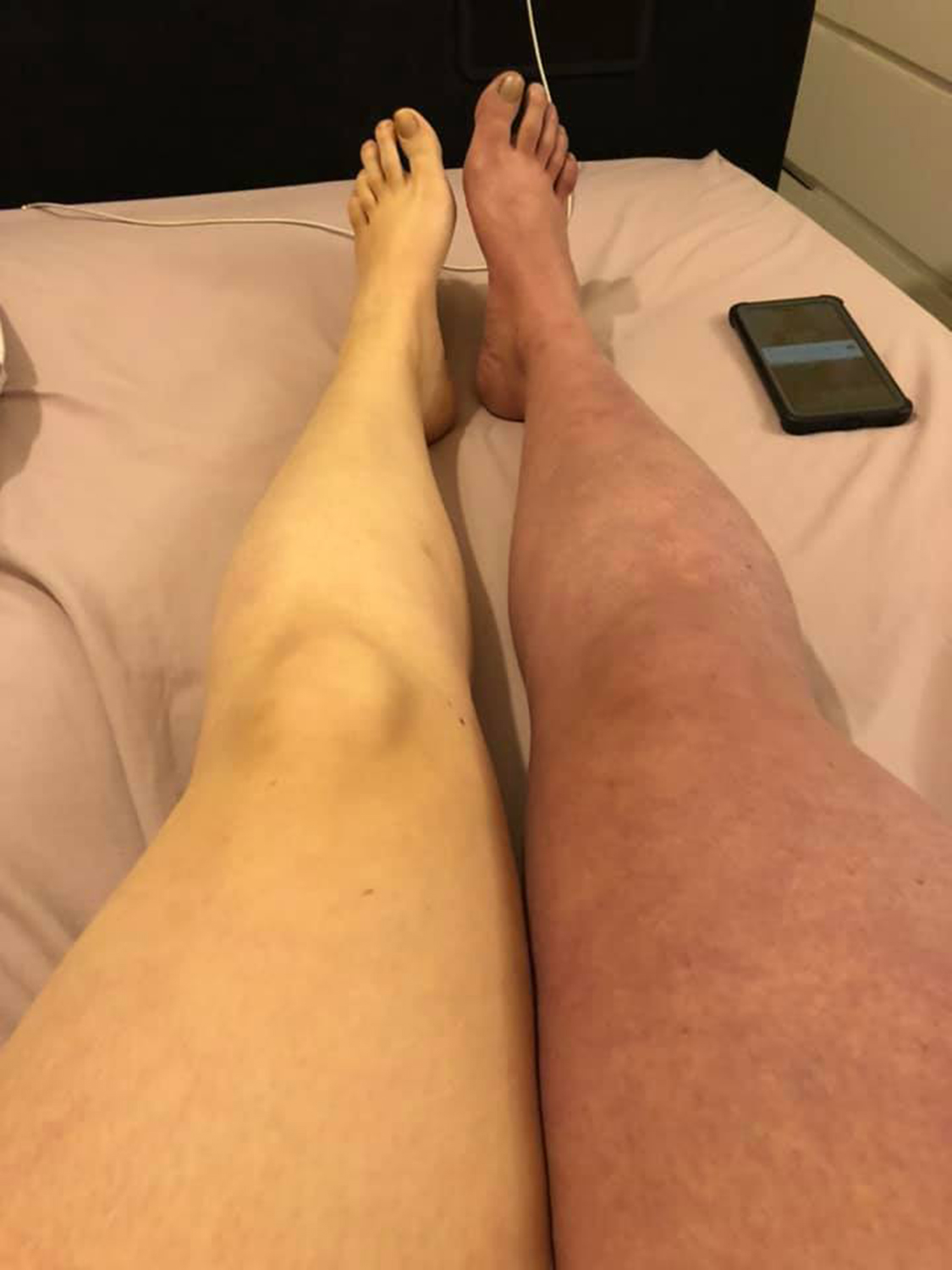 Becky’s leg was red, cold and swollen – a sign of a blood clot

Even though her result came back negative, she was told it was probably inaccurate and to self-isolate anyway.

Becky claims NHS 111 dismissed her concerns about her difficulty breathing three times as her condition worsened over a fortnight, and her GP even “ruled it out”.

Her partner, Rhys Morgan, 33, eventually rushed her into hospital one night after they discovered her leg was swollen and red – one of the key signs of a clot.

Rhys was told to prepare for the worst, because the clot could travel to her lungs, causing a pulmonary embolism, which could leave Becky suffering a cardiac arrest. Luckily she survived after being treated in hospital for three weeks.

It comes after the charity Thrombosis UK warned deadly blood clots are being mistaken for Covid and are likely to have caused unnecessary deaths.

With such a huge focus on the disease that has killed more than 75,000 Brits, it has masked the true cause of other illnesses, doctors have said.

MY GP RULED IT OUT

Becky had been training for a half-marathon when her ordeal started, having run her furthest of 12km on April 26.

But she was becoming very short of breath on short runs, and pains in her leg she thought were caused by a torn muscle.

Speaking of when her symptoms first started, Becky told The Sun: “I was the fittest I’d ever been. But one day I couldn’t even get to the top of my road and had to walk home.

“It started from there.

“One day in the middle of the night I woke with excruciating pain in my side, all up my chest, and around my shoulder and neck. I was screaming in pain.

“We spoke to NHS 111 and they said I might have slept awkwardly as the pain went away.

“My breathlessness got worse. When I walked up the stairs I collapsed on the bed out of breath. But I did not feel unwell.”

Because Becky thought she had classic symptoms of Covid, she got a test on May 14. 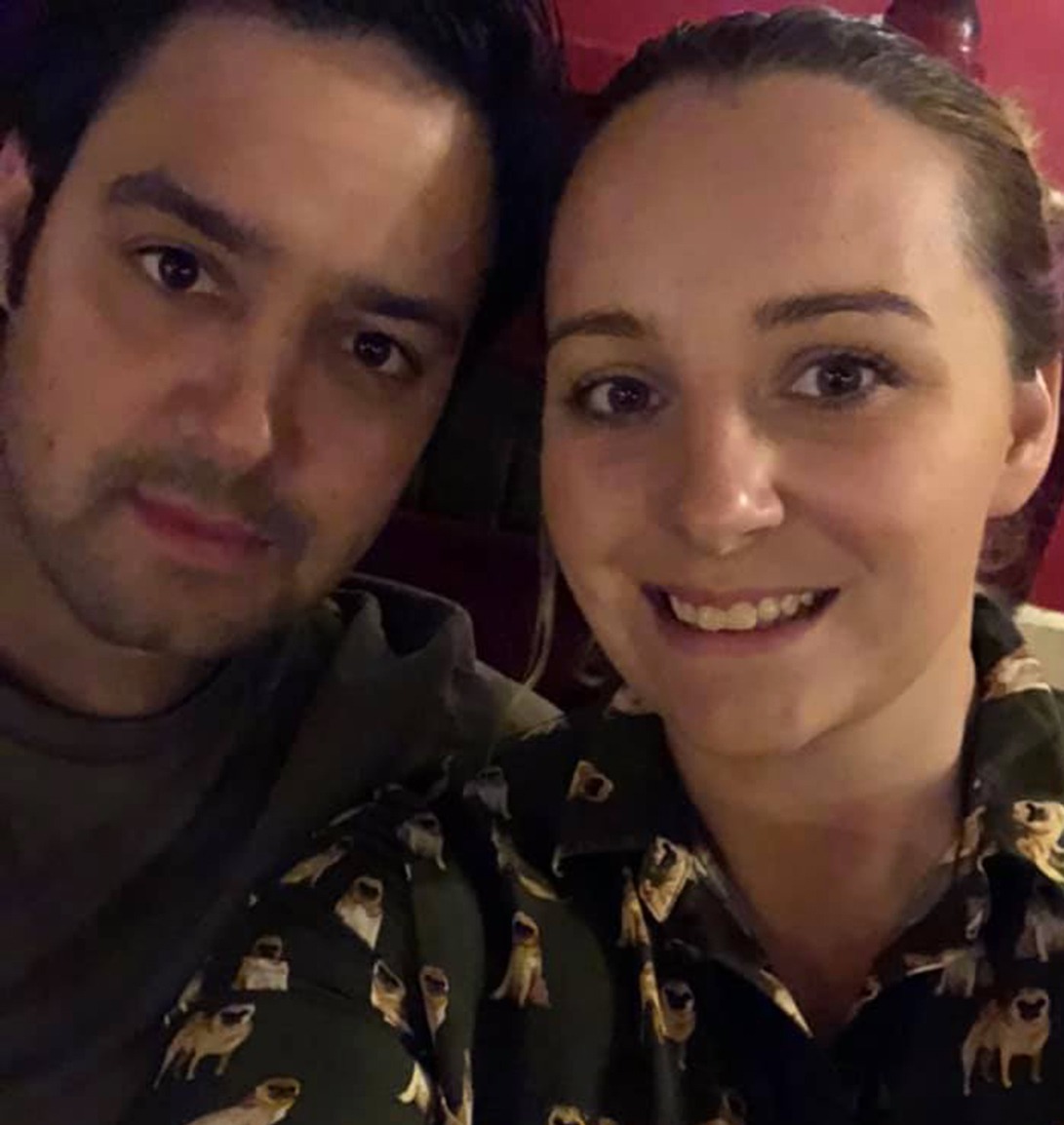 Becky with her partner, Rhys Morgan, 33

The most common symptoms of Covid-19 are a loss of smell and taste, persistent cough, chest pain, low appetite and a fever, according to researchers at King’s College London.

Although breathlessness and muscle pain is reported by people with the disease, it is not the most common.

However these two symptoms are classic of a blood clot, along with signs in the arm or leg of swelling and warm, discoloured skin.

When a blood clot travels from an arm or leg, and travels to the lung, it causes sharp, stabbing chest pains, a rapid heart rate and cough, sometimes with blood.

Despite having a negative Covid test result, Becky saw her GP who told her to self isolate because she still may be infected. 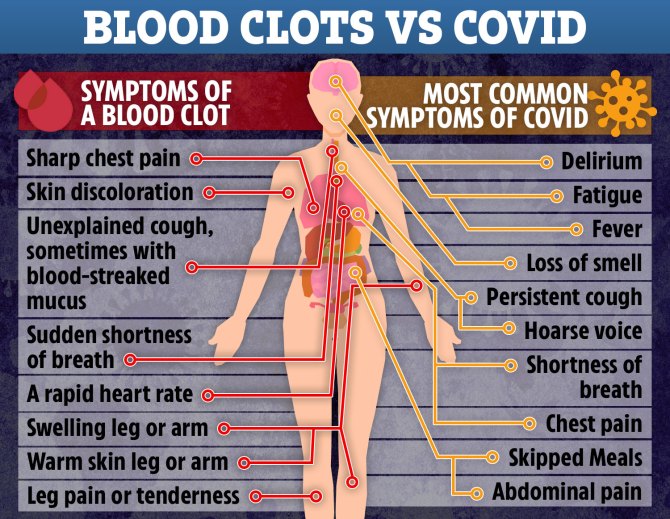 Symptoms of a blood clot compared with Covid-19

What are the symptoms of a blood clot?

Deep vein thrombosis (DVT) occurs when a blood clot forms in one of the deep veins of your body, usually in your legs.

If a blood clot breaks off from a DVT and travels to the lung, this causes a pulmonary embolism (PE). This can be fatal.

The signs and symptoms of a DVT include:

The signs and symptoms of a PE include:

Discussing Becky’s symptoms, the doctors said she was “ruling out blood clots”.

Becky said: “I never knew why she said that. Afterwards, you think maybe it did cross her mind, but with everything going on they might think she’s young and fit, and therefore too unlikely to have one.”

Blood clots can affect anyone. But they are more common in over 60 year olds, people who are overweight, smoke, or are largely inactive.

There are also some temporary situations when you’re at more risk of one, including if you travel in a car of plane for a long time or are bedridden.

I started to get a bit of blurred vision and also had light-headedness, sharp pains, and sudden breathlessness

By May 20, Becky had severe pains all across her groin area and even had to sit on hot water bottle to ease the pain.

She said: “I felt really poorly for a few days. I started to get a bit of blurred vision and also had typical clot signs like light-headedness, sharp pains, and sudden breathlessness.

“This was when I was really struggling with my breathing but over the above time period, it had rapidly changed.

“On the Monday [May 25] I felt like I was going to be sick and was wretching. I told my boyfriend I needed an ambulance but he thought I was being dramatic.

Two days later Becky woke at 1am with pain in her right leg which felt heavy. She and her partner of three years finally noticed her leg was swollen and the skin was mottled red and purple.

“I hadn’t noticed any change to my leg until then. It looked like a dead person’s leg. It was freezing and so were my toes.

“We rung NHS 111 and they said to go straight to A&E but did not mention a blood clot.

“We were really panicking. My boyfriend drove really fast to get me to hospital and after the 20 minute journey, I was really struggling to breathe.” 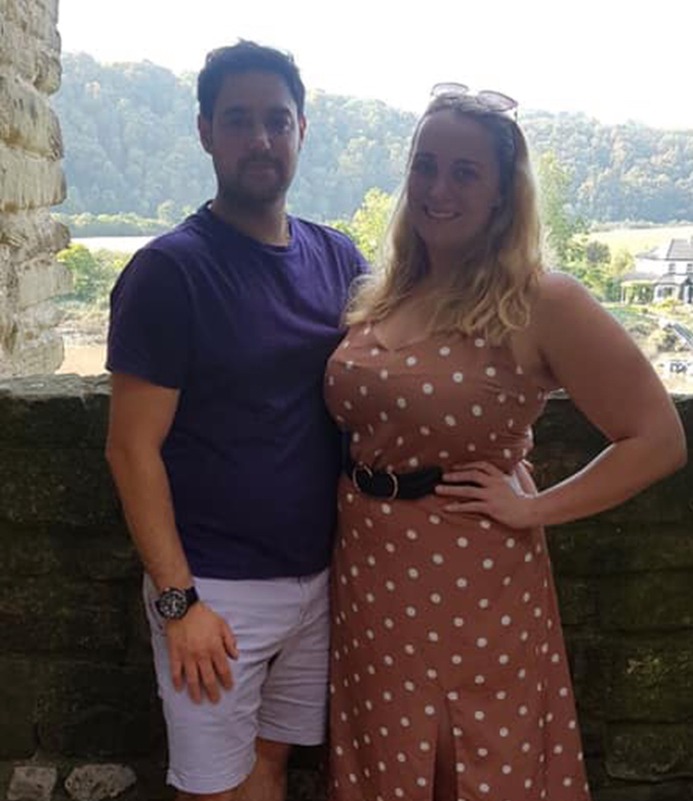 Rhys was told to expect the worse

Becky was taken for CT scans while on oxygen because her blood oxygen levels were so low.

“They were really worried about my leg because they couldn’t find a pulse in it”, Becky said.

“My other half was told to prepare himself that anything could happen.

“We got there at the right time, if I had left even a few hours later I probably wouldn’t be here to tell the story.

“They basically found the clot has gotten stuck in my groin. If that hadn’t have happened, it might have got higher up and led to a cardiac arrest or heart attack.”

Some clots had reached Becky’s right lung, as she said: “I haven’t seen the scans but I have been told that it was significant. It was significant enough to cause some strain on my heart.”

Becky came off oxygen support two days later, and stayed in hospital for three weeks where she was treated given the blood thinning drug heparin through a drip.

Doctors deemed her condition “too risky” for surgery, which would have also involved her being on a ventilator for a week.

Becky added: “I never thought, at 27 (now 28) I’d experience something like that in my life.

“I’ve never had mental health problems, and since then I’ve been very anxious. I used to be light hearted and I was easy going. But I’ve lost that, I think because of the trauma.

“I think it puts life into perspective, and now I’m more worried.”