THIS graphic reveals the symptoms to look out for on day four after the AstraZeneca Covid vaccine.

Experts say they could be the sign of an extremely rare type of blood clot and you should seek medical attention immediately. 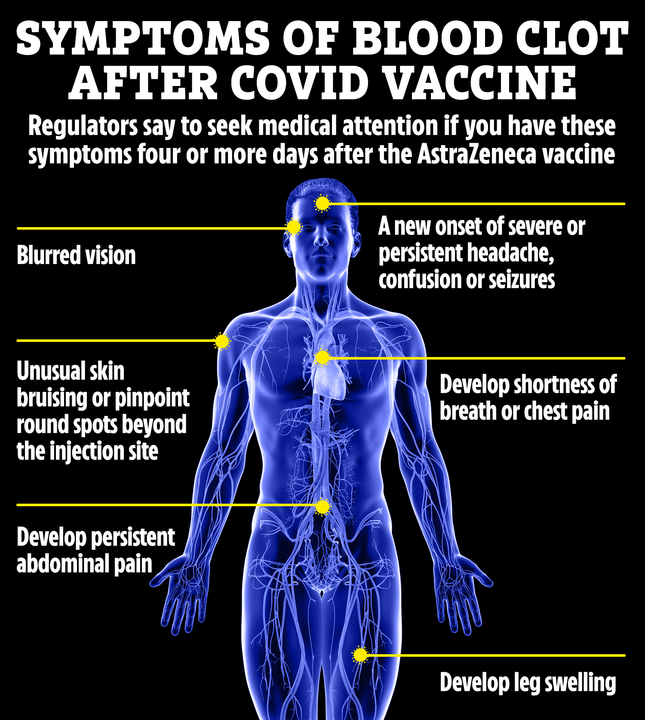 The risk of such an event is extremely unlikely, put at four in one million chance.

That’s based on UK data – 79 cases of these blood clots have been seen in 20 million people given the jab.

EU regulators suggest the risk is one in every 290,000 doses, based on reports from across the continent.

However, despite its rarity, it is important that people who receive the vaccine are aware of what to look out for.

The UK’s medicine regulator, the MHRA, says you should seek medical advice if you have had any of these symptoms four days or more after vaccination:

It’s also worth looking out for these signs after having a Pfizer or Moderna shot.

Two cases of unusual blood clotting of the same kind were seen in people recently given the Pfizer vaccine. But a detailed investigation by the MHRA concluded these were highly unlikely to have been the result of the jab.

Underlying risk factors for the event have not been determined yet, partly because the number of cases is so small.

But there appears to be a trend towards younger adults, the Government and regulators have said.

Some countries, including Germany, have seen a hint of evidence the blood clots are occurring more in women, a statement supported by EU regulators.

The MHRA has not seen this in the UK.

Investigations suggest that no vaccine increases the risk of blood clots generally.

What are the rare blood clots reported?

The MHRA have been looking at two types of blood clotting events that unusually occur with low blood platelets – called thrombocytopenia.

These are CVST – which prevents the brain from properly draining blood – and thrombosis in other major veins.

The cases are out of 20 million doses of the AstraZeneca vaccine, making it extremely rare.

A whole host of risk factors can put someone at higher risk of a blood clot, including being overweight, smoking or going on a long car journey.

And so having a blood clot after a vaccine is likely a coincidence, and there could be many thousands of cases among the millions of people jabbed over the months.

There is also the potential that blood clots are caused by Covid itself.

The signs of a blood clot are:

Vaccine side effects are normal

Side effects after receiving a vaccine are completely normal and are a sign the body is responding to the drug.

The MHRA has previously said around one in ten people will experience side effects after having the jab.

In most cases, these are “mild and short lasting” and in line with “a normal immune response to vaccines”.

The side effects generally appear within a few hours and resolve within a day or two. It feels a little like having a hangover.

The most common are:

It comes after regulators confirmed yesterday that evidence of a link between the AstraZeneca vaccine and rare blood clots has become stronger.

The MHRA’s chief executive, Dr June Raine, said there is a “reasonably plausible” link – which means that it’s still not conclusive.

It led to a decision to only offer people under the age of 30 an alternative vaccine, given most cases reported so far have appeared to be in younger people.

But Dr Raine said for the “vast majority” of people, “the benefits of the Covid-19 vaccine AstraZeneca against Covid-19 and its associated risks – hospitalisation and death – continues to outweigh the risks”.

The message was echoed by EU regulators, who also gave their verdict yesterday.

Dr Sabine Straus, European Medicines Agency (EMA) safety committee chairwoman, said: “Our conclusion is that these clotting disorders are very rare side effects of the vaccine.”

She added the vaccine is “saving lives” and we “need to use vaccines we have to protect us from the devastating effects” of Covid-19.

The EMA have decided to list “unusual blood clots with low blood platelets” as a very rare side effect of the jab.

Sister of man, 59, who died of blood clot after getting AstraZeneca vaccine says she will still get her second dose