OVER a million people in England are still infected with Covid-19 despite cases falling across the country, new official data shows.

The Office for National Statistics (ONS) said one in 55 people still have Covid and warned that the rate of decrease is “running out of steam”. 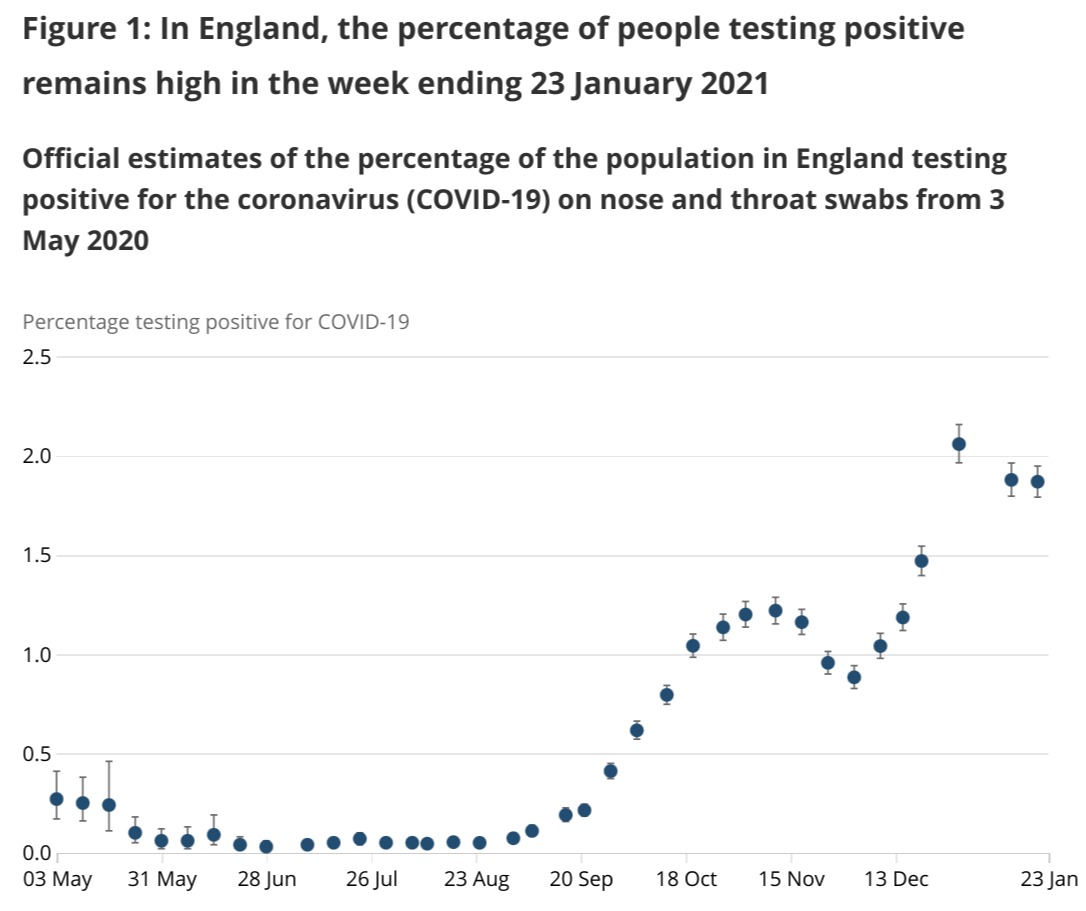 Data from the ONS shows how cases of Covid-19 are starting to level off across England Credit: ons

The figures, from the seven days to January 23, show that London has the highest percentage of people testing positive for Covid-19.

One in 35 people in the capital currently have Covid, according to the ONS.

Public Health England yesterday stated that cases across the country were falling but that deaths “would remain high” for some time.

The data from the ONS shows that approximately 1,018,700 have coronavirus.

Meanwhile, figures from the ZOE Symptom Tracker App show that since January cases have fallen by 60 per cent and that in the last week they have dipped by 22 per cent.

Lead scientist of the study, Professor Tim Spector said Brits need to remember that the risk of infection is still high.

He said: “Cases are still falling which is good news but there are signs that this 60 per cent decrease is running out of steam with some areas already starting to see R values creep back up to 1.0.

“With the number of active cases (prevalence) at 520,000 and falling slowly, the risk of infection remains high and so it’s important to continue with social measures to reduce transmission.” 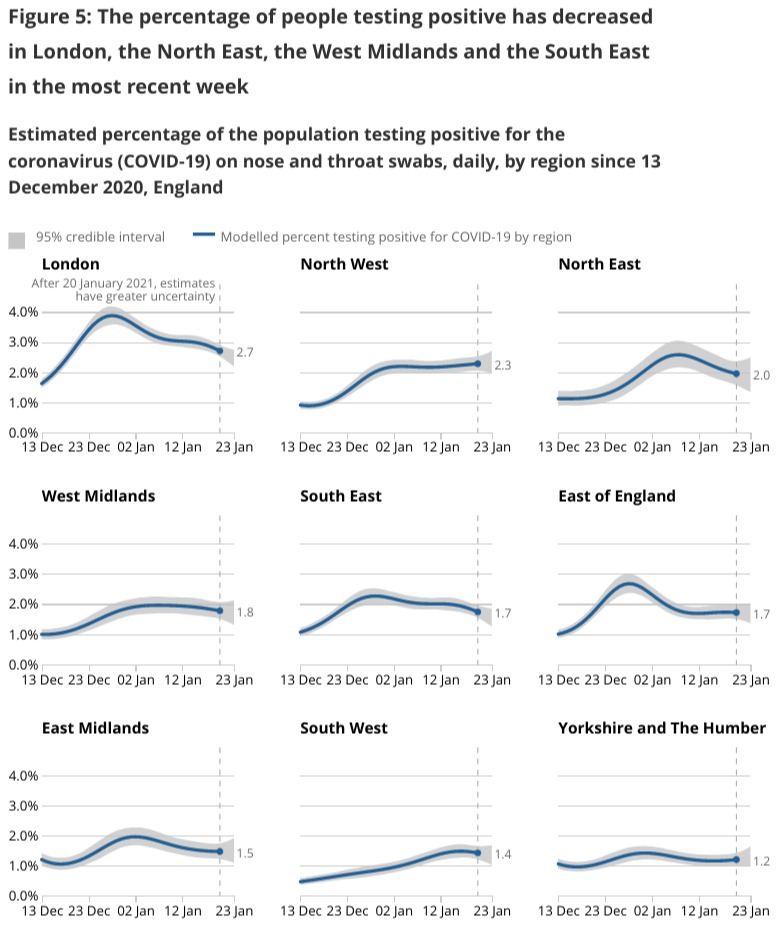 The ONS said the percentage of people testing positive for coronavirus (Covid-19) in England “remains high”.

Data is based on swabs taken from people in households, regardless of whether they have symptoms or not.

It does not include care homes, hospitals and other institutional settings.

In England, the estimates for the latest six-week period are based on 501,255 swab tests.

Aside from London, the North West has seen the second highest infection rates in the country.

This echoes data from PHE which states that Knowsley in Merseyside is the most infected area in the country.

Data from the ZOE app also shows that Liverpool is the most infected area in the country – which also sits within the North West.

The ONS said: “The percentage of people testing positive in London, the North East, the West Midlands and the South East decreased during the week ending 23 January 2021. Rates in all other regions appear to be level.”

Meanwhile, in Wales, around one in 70 people had Covid-19, also unchanged from the previous estimate.

Across the UK there are currently over 36,000 people in hospital with the coronavirus, but Prof Spector added that hospital admissions are now “easing slightly”.

Prof Spector said: “With the continued roll out of the vaccine to hospital staff, the older and most vulnerable, we are hopeful that we will start to see a real impact on infection levels and hospital pressure soon.”

The data also shows that cases of the new variant have increased in the East Midlands.

The UK variant was first discovered in Kent in September last year and was partly the reason the UK had to go into a third national lockdown as the tiers system already in place was not sufficient to curb the spread.

Sarah Crofts, senior statistician for the ONS Covid-19 Infection Survey, said: “In England rates are level but remain high, with the estimated level of infection still over one million people.

“Infection rates across Wales and Scotland have remained level and in Northern Ireland rates of infection have begun to level off.

“The percentage of positive tests compatible with the new (UK) variant of the virus has increased in the East Midlands.

“Across other regions rates remained relatively stable or are declining.”