EASYJET customers have been left furious by last minute cancellations while the airline hikes prices for flights and packages over the summer.

The budget travel provider has cancelled huge numbers of flights, but confusing communications have left would-be holidaymakers baffled and out of pocket. 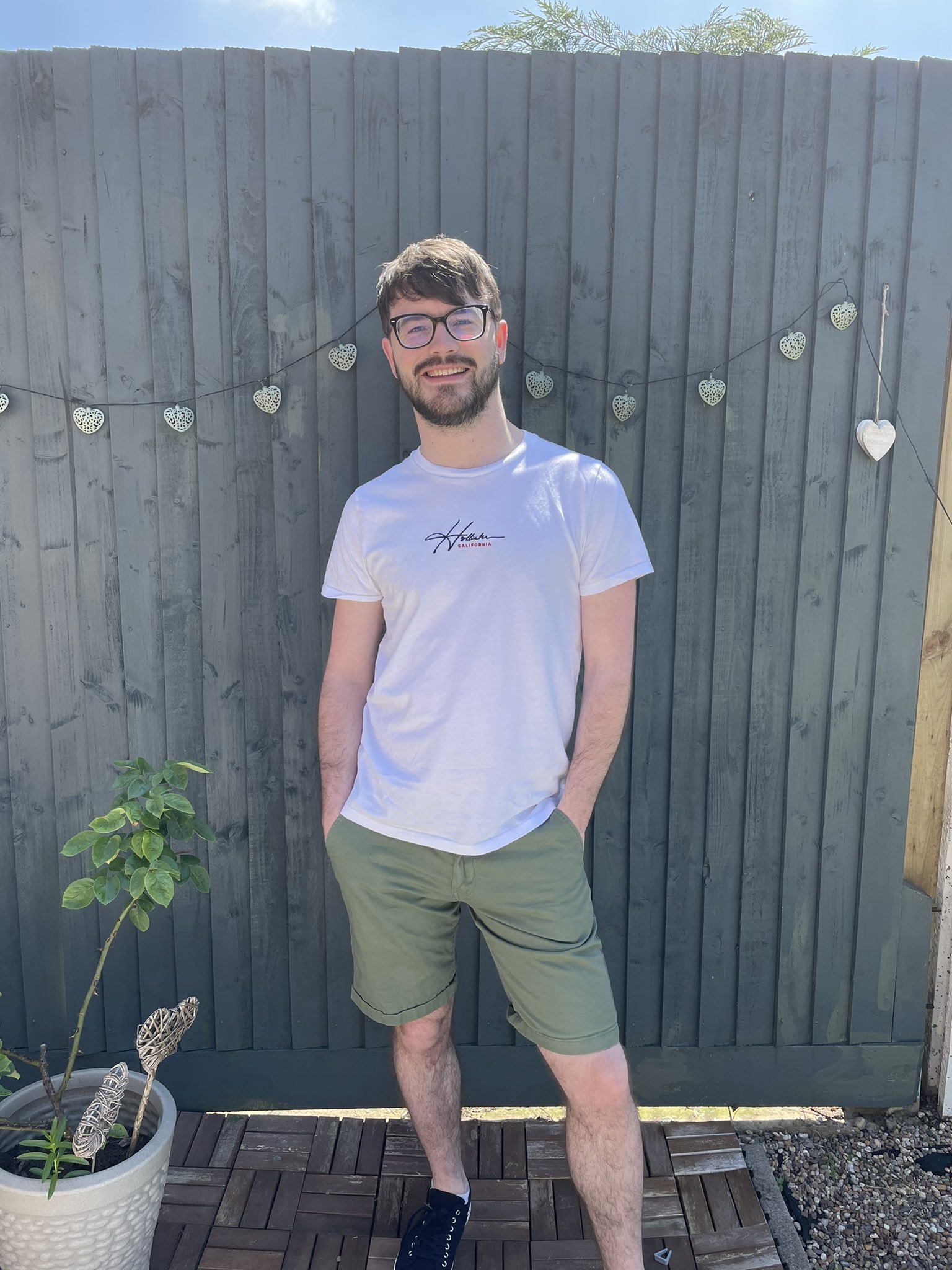 Adam has had his holiday cancelled with just a month’s notice.

Adam Collins, a 28-year old SEO consultant, had his holiday to Crete cancelled with just a month’s notice.

In a customer services email seen by the Sun, EasyJet said that it could not find an alternative flight for Adam and his girlfriend, and so the whole trip was called off.

The email read: “Unfortunately, one of the flights for your holiday to Crete has been cancelled, and we’ve been unable to find you a suitable alternative flight on the same day. We’re really sorry that, as a result, your holiday will be unable to go ahead.”

Adam had been looking forward to his vacation, which he booked earlier in the year to coincide with the end of lockdown when travel would be permitted again.

While there may have been risks around the Covid-19 rules changing, the cancellation is because EasyJet has removed flights, rather than because of any pandemic regulations.

Adam told the Sun: “I’m not ashamed to admit that the early parts of this year were a massive struggle, my partner and I had just recovered from Covid, we were fighting to keep our small marketing company open for business and were feeling the mental strains of being stuck permanently in lockdown.

“After seeing EasyJet’s TV advertisements to book holidays abroad we decided to take a chance and book the holiday for June, once lockdown had been fully lifted. 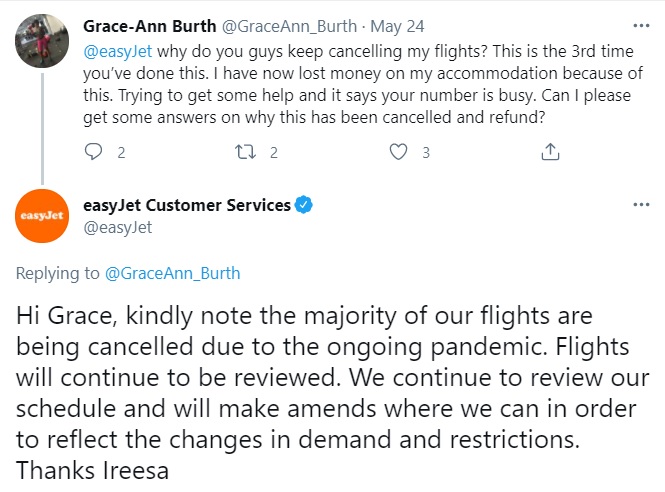 Easyjet initially said the majority of flights were cancelled, but has since said this was a mistake

“We decided to use this as an opportunity to draw a line under what has been the most challenging period of our lives and support the aviation industry when most people were not booking holidays abroad.”

EasyJet’s policy is people will be booked onto new flights if theirs are no longer running.

A spokesperson told the Sun: “Should any flights be cancelled customers will be notified and informed of their options which includes transferring to an alternative flight free of charge, receiving a voucher or a refund.”

But due to the enormous numbers of flight cancellations many people are struggling to find an acceptable alternative that works for their trip.

While Adam’s original flight is no longer running, a quick search online shows that equivalent holidays are available two days later – but they cost double the price.

This means that if he wanted to use his refund money to move his holiday, he’d have to pay the thousands of pounds extra, 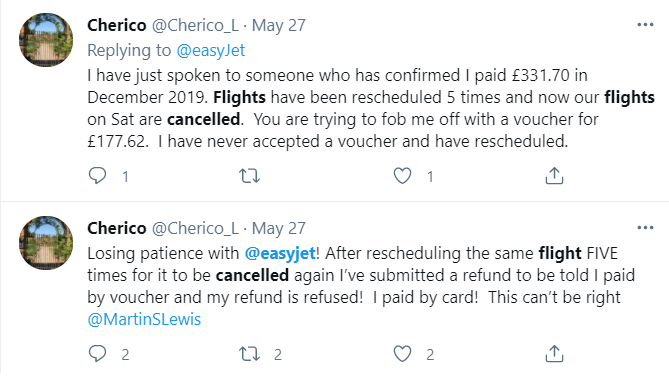 Customers have been losing patience with the continually cancelled flights

When Adam asked about the alternative holiday dates, Easyjet wouldn’t transfer the booking across.

He said: “We asked to be moved to that day and they refused to help, we even said we would be happy paying more and losing a couple of days, but they refused.”

The chaos has been extremely distressing for customers like Adam, who booked their holidays in good faith and now are being told they can’t go away.

Despite looking forward to the holiday for several months, Adam was frustrated to find it had been cancelled, and by the consistently poor customer service he experienced from the firm.

He said: “We were told by customer service to be “happy EasyJet were providing a refund and to rebook”.

“EasyJet’s handling of our situation is appalling. We have been lied to by their customer service team, who told us they would ensure a manager calls us back, which never happened. Running a small business, I was shocked how badly they treated their customers.

“EasyJet has offered a refund; however, the prices for this package are now more than double the price, which we cannot afford. So it looks like we will no longer be going abroad this year.

“Although a cancelled holiday may sound trivial to some, for those who have been struggling mentally, it was a ray of light in an all to troubling time.” 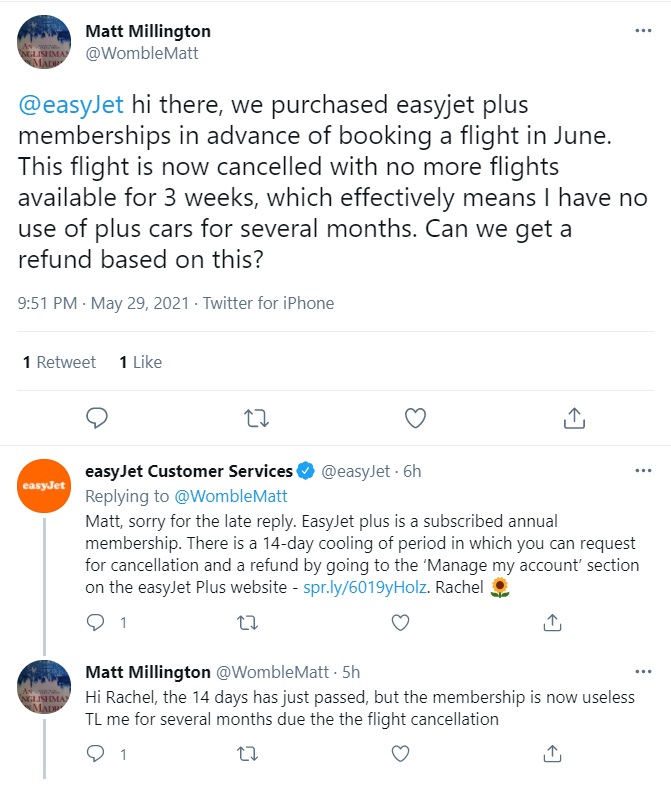 Adam is far from the only customer who has been caught out by the cancellations and annoyed by the lack of communication or service from EasyJet.

Several others been tweeting at the firm trying to get clarity on why their flights have been called off and what to do if they can’t rebook.

Many of these people have rebooked flights several times, only to find that the new bookings are cancelled too.

Grace Ann tweeted: “EasyJet, why do you guys keep cancelling my flights? This is the 3rd time you’ve done this. I have now lost money on my accommodation because of this.

“Trying to get some help and it says your number is busy. Can I please get some answers on why this has been cancelled and refund?”

EasyJet initially responded saying it was cancelling “the majority” of its flights, though the firm has since issued a statement saying this was a mistake and only some flights are being stopped.

The original tweet read: “Hi Grace, kindly note the majority of our flights are being cancelled due to the ongoing pandemic. Flights will continue to be reviewed. We continue to review our schedule and will make amends where we can in order to reflect the changes in demand and restrictions.”

Plenty of people are also reporting issues getting money back. Typically, this problem seems to occur when someone had originally accepted a voucher refund and used this to book a flight which has now also been cancelled.

Some people are struggling to now get a cash refund, while others report issues recouping additional cash payments for more expensive holidays.

For instance, Carrie tweeted: “Losing patience with EasyJet. After rescheduling the same flight FIVE times for it to be cancelled again I’ve submitted a refund to be told I paid by voucher and my refund is refused! I paid by card! This can’t be right.

“I have just spoken to someone who has confirmed I paid £331.70 in December 2019. Flights have been rescheduled 5 times and now our flights on Sat are cancelled. You are trying to fob me off with a voucher for £177.62.”

Another customer is complaining that he took out an EasyJet Plus subscription before booking a flight so that he could take advantage of car services.

Now, his flight has been cancelled and he can’t book another one, meaning the additional subscription can’t be used.

EasyJet has refused a refund, despite Matt being unable to rebook his flight – as he is outside of the cooling off period for the subscription.

A spokesperson for EasyJet said: “We continue to operate as many flights as possible but because of the ongoing pandemic and the restrictions to Amber and Red list destinations we are continuing to monitor demand and adjust our flight schedule on an ongoing basis in line with that.

“We are providing customers with more flexibility than ever before with our Protection Promise which offers for customers to change their flights this summer without a change fee, at any time up to two hours before departure.

“Customers can move to any flight on any route on our network, up to the end of September 2022, and to any other destination on our network.”

Half-term holiday travel ban: Are you entitled to a refund if new rules ban hotel stays in UK Covid hotspot?

Holiday refund chaos over fears of Portugal travel ban – but trips will go-ahead.

Thai and Indian variants are proof we must STOP holidays abroad, says expert