CORONAVIRUS weight loss warnings could be fuelling a rise in eating disorders after severe cases of Covid-19 were linked to obesity, experts have warned.

During the pandemic Brits have witnessed a rise in public health messages linked to weight loss and exercise.

Experts have warned that young people have been ‘bombarded’ with weight loss messages during the pandemicCredit: Getty Images – Getty

The Royal College of Psychiatrists has now said that younger people have been “bombarded” with this rhetoric.

Studies have previously shown that overweight Brits are twice as likely to be killed by Covid.

More than a quarter of Brits are obese – with a body mass index over 30. It compares to just one in 35 in the 70s.

Sir Simon, chief executive of NHS England warned underlying conditions, such as excess weight, may explain why Britain has fared worse than other nations during the pandemic.

He previously said that we are “all carrying too many pounds as a country”, adding that there is a “strong case” for “getting serious” about issues such as obesity.

The chair of the Royal College of Psychiatrist’s faculty of eating disorders, Dr Agnes Ayton said the coronavirus lockdown has meant that many people have not had access to their support networks.

She said: “A lot of public health messages have also been about weight loss and exercise during the pandemic, and that has been promoted by the Government because of the risk of obesity and serious Covid.

“But if you are a younger person worrying about your weight and shape, you’re bombarded with these messages and think ‘I should lose weight’.”

Brits are currently living through a third national coronavirus lockdown after cases started to rise again in December.

The pandemic has created uncertainty for many people when it comes to work and home life.

At the start of the pandemic supermarket shelves were stripped of essentials – creating issues around food supplies and leaving many people without essential items and healthy options. 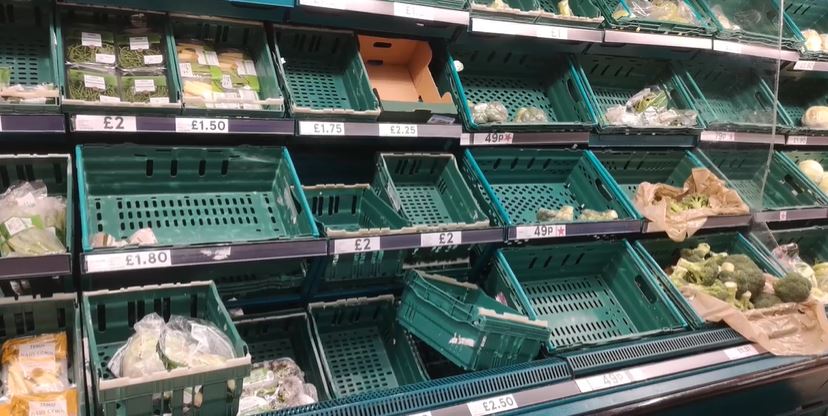 After the third national lockdown was announced, supermarket shelve were strippedCredit: Newsflare

Dr Ayton explained that the pandemic would have fuelled anxiety among those who have eating disorders.

The psychiatrist said: “People have been buying things that may last longer. Some of these foods – like pasta or biscuits – can be a trigger food for people who are bingeing or who have bulimia.”

In December, data published by NHS England revealed that hospital admissions for eating disorders shot up by a third in two years.

Nearly half of the 418 admissions of children aged ten to 12 were for girls with anorexia.

Under-tens were also treated in hospital for eating disorders.

In some areas of the country, Dr Ayton said treatment for those suffering from eating disorders had been cut due to social distancing regulations.

At present there are around 455 adult inpatient beds for eating disorders in the UK.

Dr Ayton said that the vast majority of adult services are in a state of disrepair or are in very small rooms.

The pandemic, she said, has meant that the same level of capacity cannot be run and in turn waiting lists have grown.

She said: “The number of people referred for admission with severe eating disorders is a small proportion… but you’re talking about people who are at really high risk of dying or at potential risk of dying.”

Dr Ayton covers areas such as Berkshire, Buckinghamshire and Oxfordshire and said that before the pandemic patients would have to wait around four weeks for treatment – depending on urgency.

Now she said they could be waiting for more than two months and added that this was even being seen in patients who have extremely low BMI (body mass index).

She added: “That puts an enormous pressure on everyone, so obviously on patients and the family but also staff, who want to help them. It is very, very stressful.”

An NHS spokesperson said: “The NHS is committed to early intervention for the treatment of eating disorders and has made money available for both early pilots and recurrent funding in all parts of the country from this year for community eating disorder services.

“Local areas are receiving year-on-year increases in their funding for community-based mental health throughout the course of the Long Term Plan and all healthcare providers are expected to work together with other local partners to ensure mental health care for adults, including those with eating disorders is expanded and improved.”

If you or someone you know is struggling with an eating disorder then you can contact the Beat helpline on 0808 801 0677.

The charity also runs an online webchat where you can get advice.

If you are in need of urgent help then you should call 999.