UP to 20 railway workers reportedly held a lockdown baby shower at a closed Patisserie Valerie – sparking a coronavirus outbreak.

Chiltern Railways has launched an internal investigation after staff allegedly held a surprise party in the bakery at London’s Marylebone station. 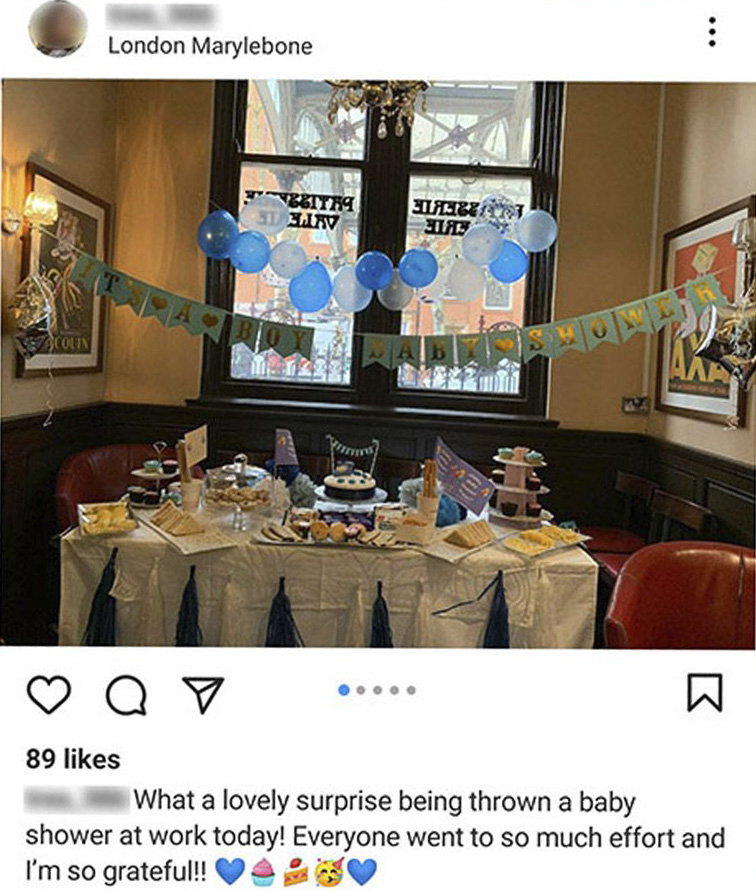 Photographs of the alleged baby shower were posted on InstagramCredit: Instagram 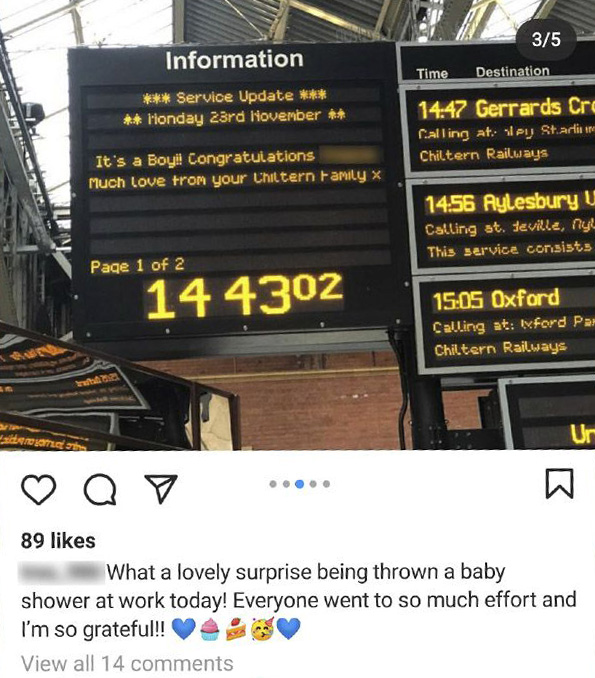 Staff appeared to write a “congratulations” message on the departures boardCredit: Instagram

One worker told BBC News up to 20 colleagues, including some who were working at the time, attended the bash.

They said some of those at the party then tested positive for Covid, resulting in most of the team being forced to self-isolate.

It is believed around 30 people were invited to the event on November 23 – during the second national coronavirus lockdown.

Another photograph showed how colleagues had written a message on the departures board which read: “It’s a boy! Congratulations, much love from your Chiltern Family.”

The pictures were shared on Instagram with the caption: “What a lovely surprise being thrown a baby shower at work today!”

Another photograph appears to show eight workers ignoring social distancing guidelines as they pose for a picture.

People were either sent WhatsApp messages or were invited face-to-face on that day, reports the BBC.

Chiltern is aware of the allegations and said “appropriate action” would be taken once it has carried out an investigation.

One worker declined an invitation and said he was “shocked and alarmed” to see people hugging each other and not wearing masks.

A Patisserie Valerie spokesman told the BBC they had not been made aware of any event and none of its staff could access the café which has been closed since March.

He did, however, say a member of station staff would have keys to the premises for “security reasons”.

He said some colleagues were “petrified” and those who lived with vulnerable people were “scared to go home”.

It’s a boy! Congratulations, much love from your Chiltern Family.”

Chiltern confirmed a “small number” of its staff tested positive after November 23 and added it was “making every effort” to maintain a Covid-secure environment.

However, a spokeswoman said: “None of the staff who were alleged to have attended (the baby shower) tested positive.”

A worker said he felt “demoralised” to hear about the alleged bash after spending so much time encouraging commuters to socially distance and wear masks.

He told the BBC: “A lot of us don’t want to be at work during this time, for obvious reasons.

“We’re doing a job where we do come into contact with a lot of people – it’s stressful enough with your own family, who are a bit worried about you going in to work at a train station and asking if you’re getting the proper protection.”

It comes after a passenger in a Mercedes was fined £400 after breaching lockdown rules TWICE in four days.

The rule breaker was fined £200 for travelling to Chesterfield from Leicestershire to meet two pals for “exercise” – at McDonald’s.

The penalty for a first breach of lockdown rules is £200, lowered to a £100 if paid within two week.

But second- time offenders are fined £400, meaning this passenger must now fork out £600 in total.

The amount doubles for each further offence, up to a maximum of £6,400.

UK Covid deaths up 1,610 in biggest rise since pandemic began as another 33,355 test positive