COVID data which Democrats claim was “hidden” by the Trump administration has been published for the first time, revealing the worst virus hotspots.

Donald Trump had allegedly told state officials the stats were confidential and should not be published, Democrats in the new White House administration claimed. 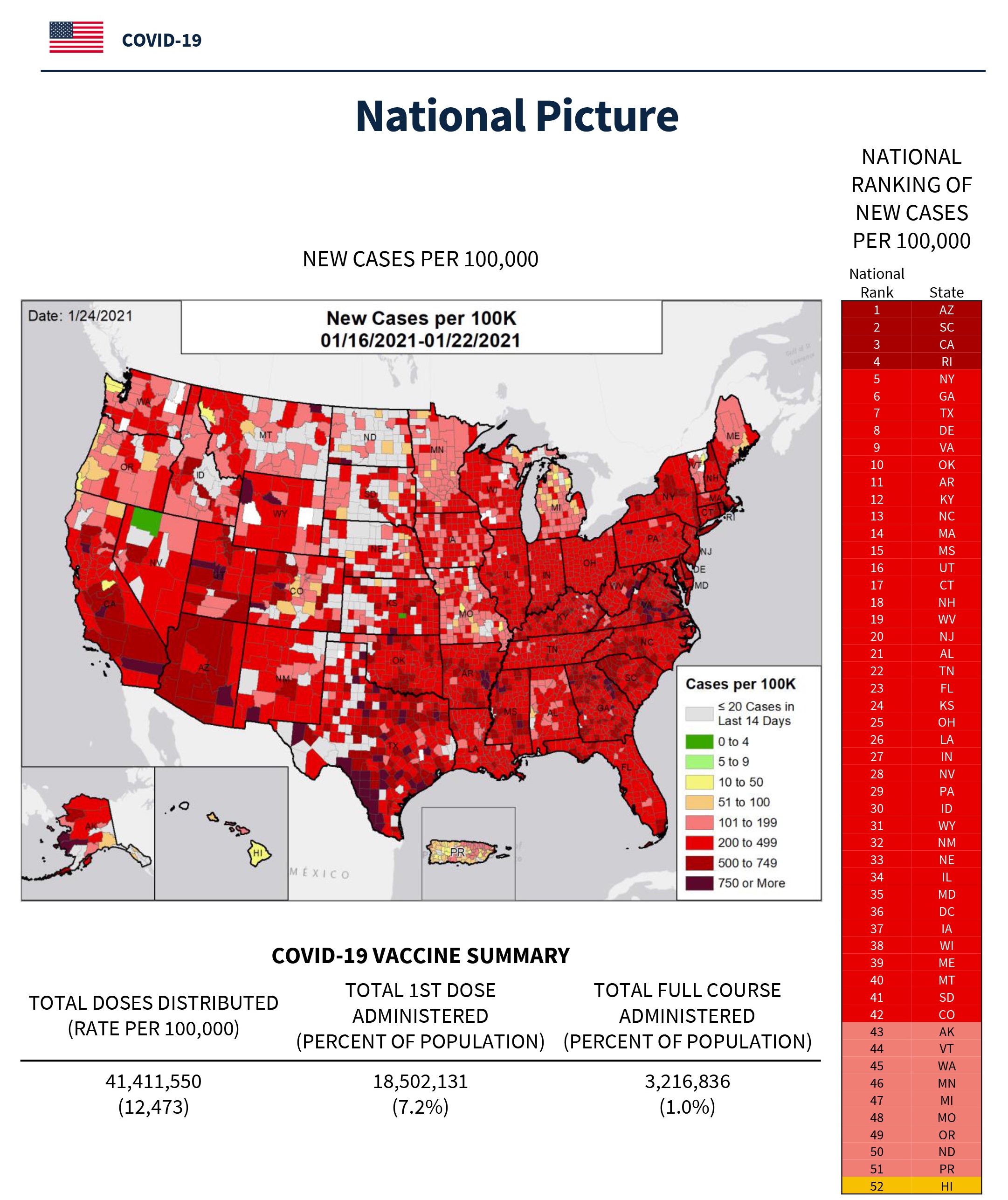 The state-level data will continue to be posted every week 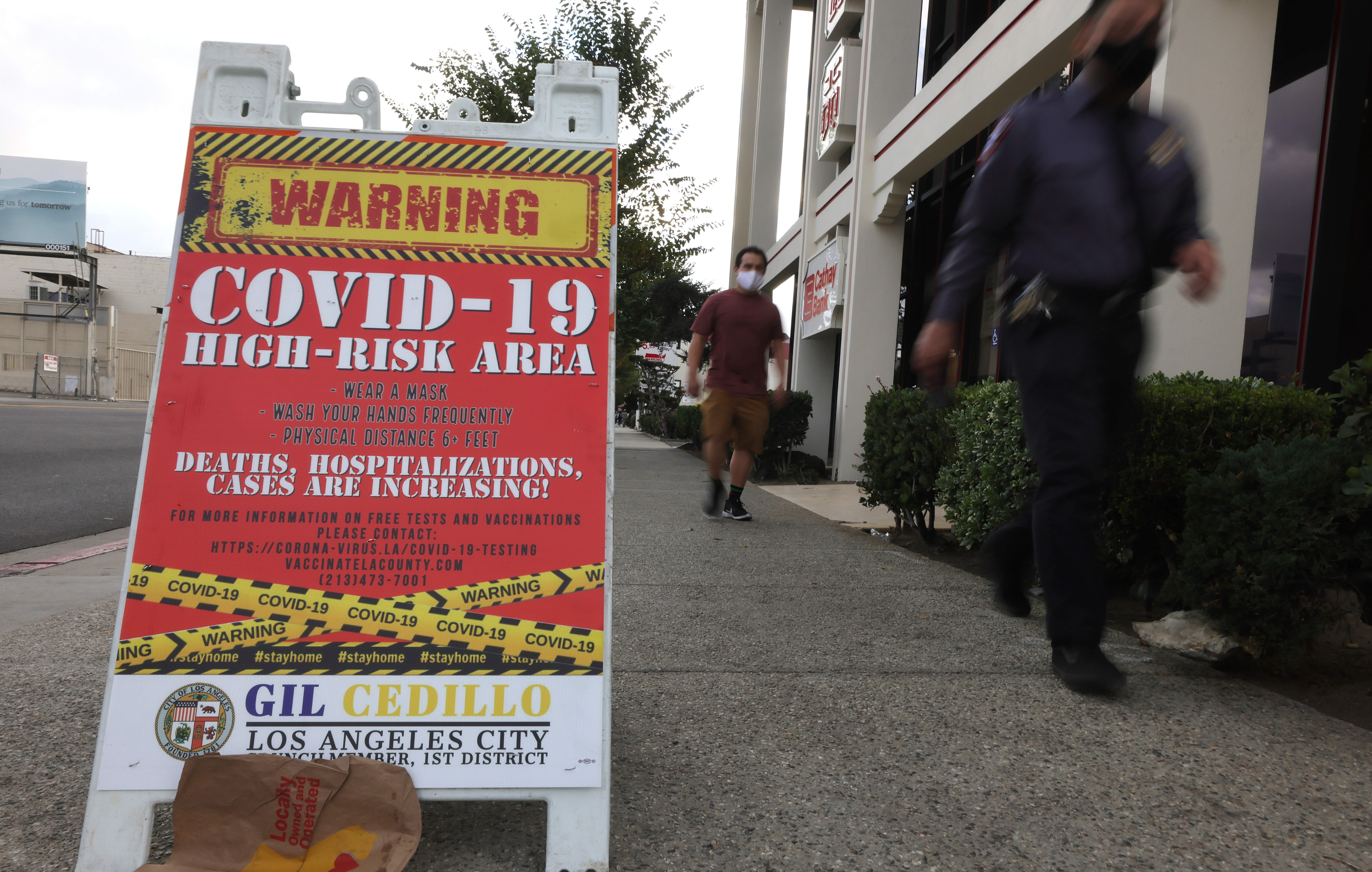 Following President Joe Biden’s promise of “trust and transparency,” Trump’s weekly updates to state officials will now be made public.

The state-level data will continue to be posted every week, and it has been made available in the same format which was provided to state officials in previous weeks.

“We are now sharing previously hidden weekly Covid-19 state profile reports with the public,” Shahpar said on Twitter, with a link to the datasets.

“Many thanks to the people in and outside of government who mobilized to gather, analyze and share Covid-19 related data,” he added.

“Too many to mention. Often working long hours as volunteers. Their hard work is the foundation for a more transparent, data-driven federal response.”

The new data reveals Arizona, South Carolina, and California have been ravaged by the deadly virus and are the nation’s worst hotspots. 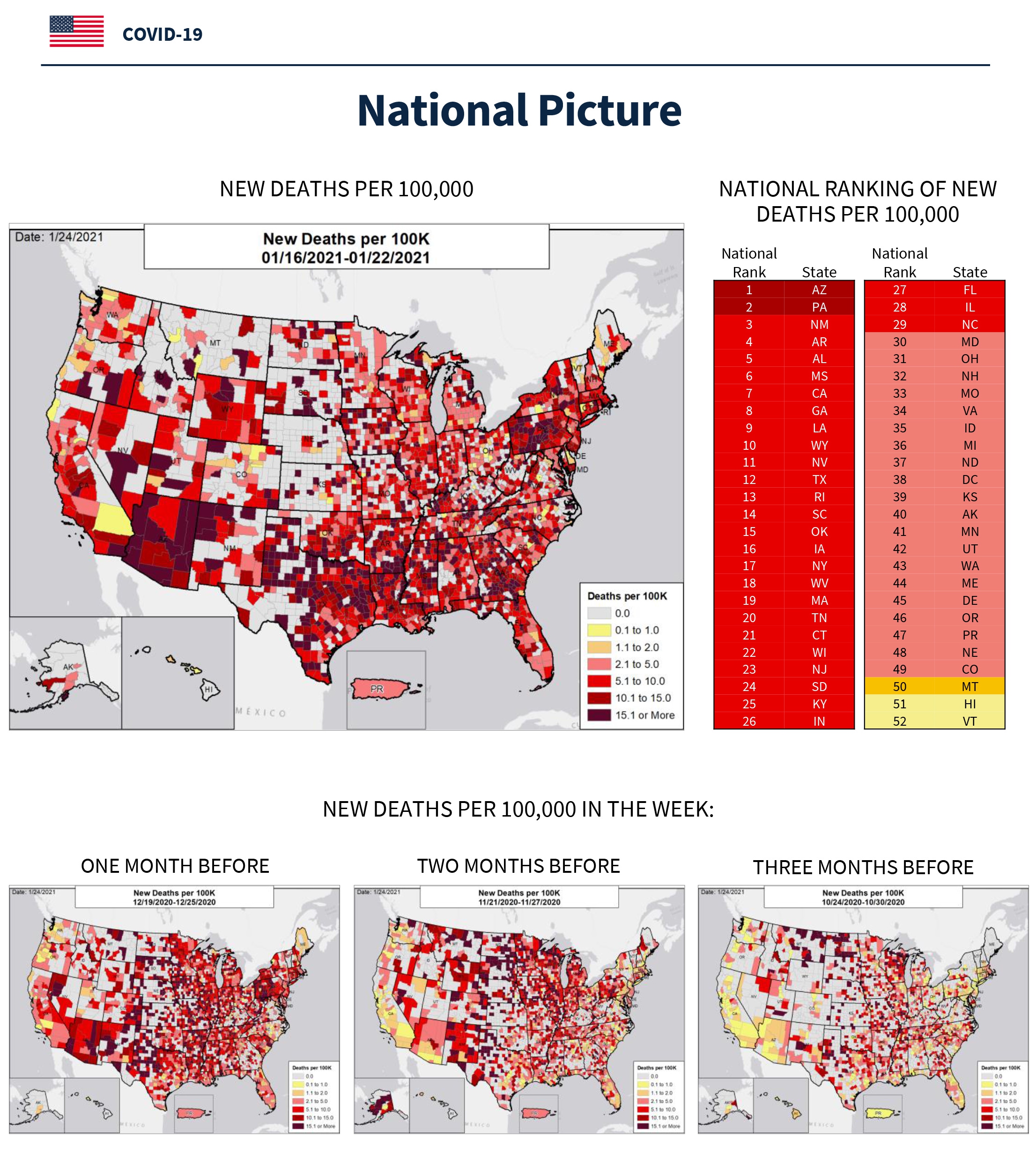 The report shows a mostly red map of the United States 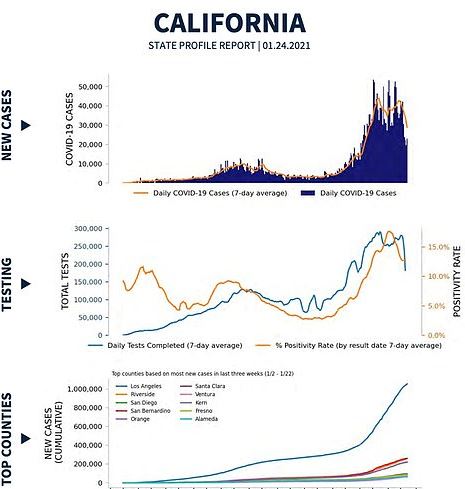 California’s death toll since the start of the pandemic rose to nearly 39,000Credit: HHS

The rate of infection was highest in South Carolina last week, where 645 new infections per 100,000 residents were recorded.

The reports show a mostly red map of the United States, which means 200 or more people are dying per capita in a week in most areas of the country.

California reported its second-highest number of Covid-19 deaths on Thursday – but the rates of new infections and hospitalizations continue to drop.

State officials said the total of 737 new deaths on Thursday is second to the record 764 reported on January 22.

California’s death toll since the start of the pandemic rose to nearly 39,000, while total cases topped 3.1million. 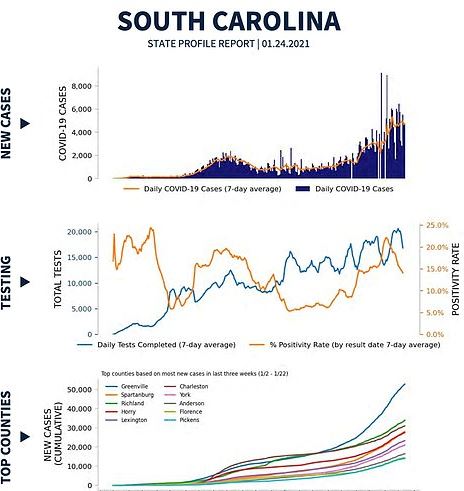 South Carolina has also been hit hard by the coronavirus pandemicCredit: HHS

Meanwhile, in a sign of progress, Florida’s program to vaccinate residents and staff members at long-term care facilities has been completed, according to the state’s director of emergency management.

Earlier this month, Biden signed an executive order on a “data-driven response to Covid-19.”

“Consistent with this policy, the heads of all executive departments and agencies shall facilitate the gathering, sharing, and publication of Covid-19-related data,” it said.

Aides said Biden and Vice President Kamala Harris are both focused on the pandemic for now, scrambling to bring it under control by getting more people vaccinated while working on new measures to help stimulate the economy.

The United States has recorded more than 25million Covid cases and 433,000 deaths since the pandemic started last year.

More uncertainty has been thrown into the mix after the US reported its first cases of the South Africa virus variant in South Carolina. 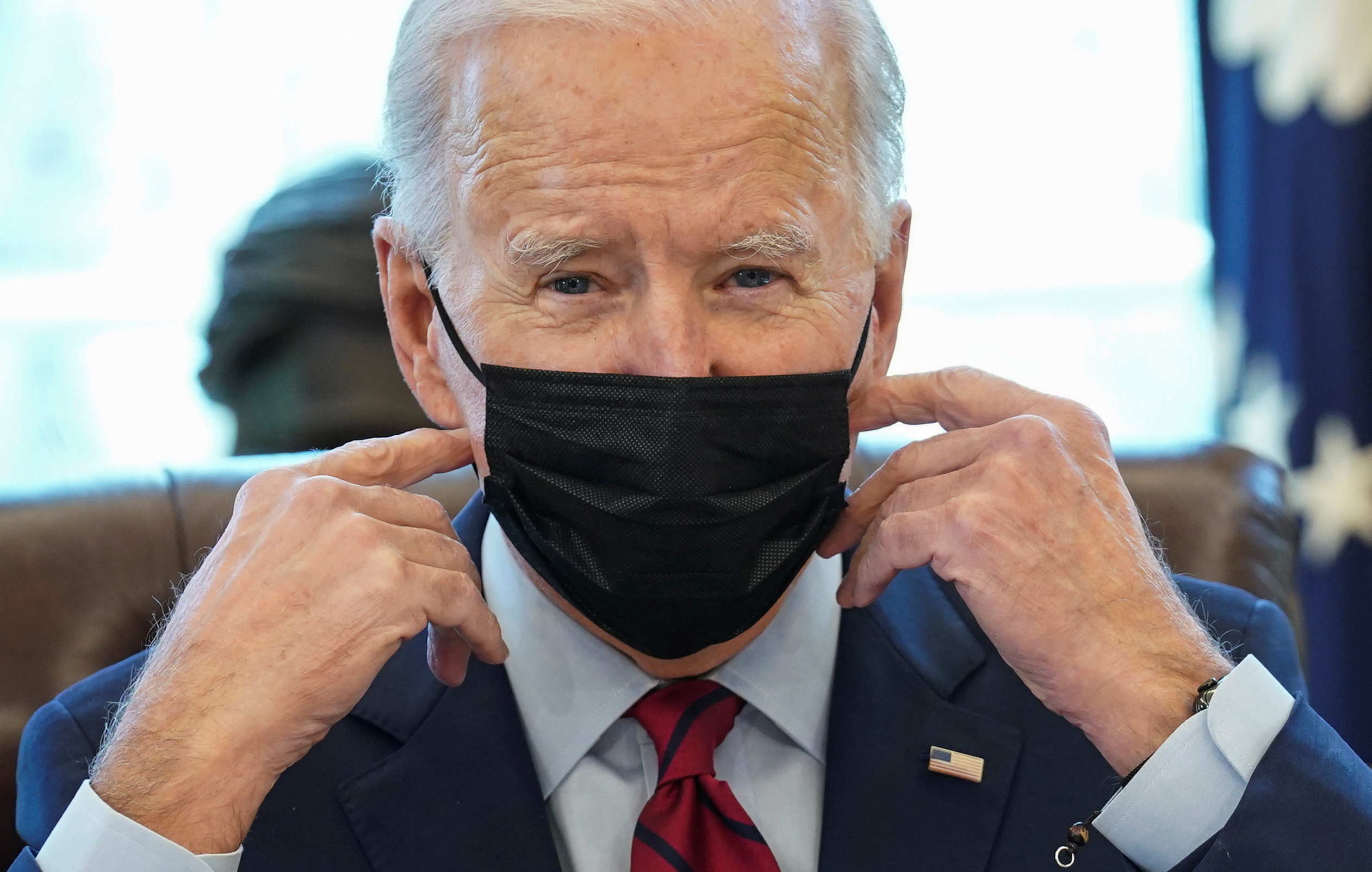 Biden has pushed for a ‘data-driven’ response to the coronavirus outbreakCredit: Reuters 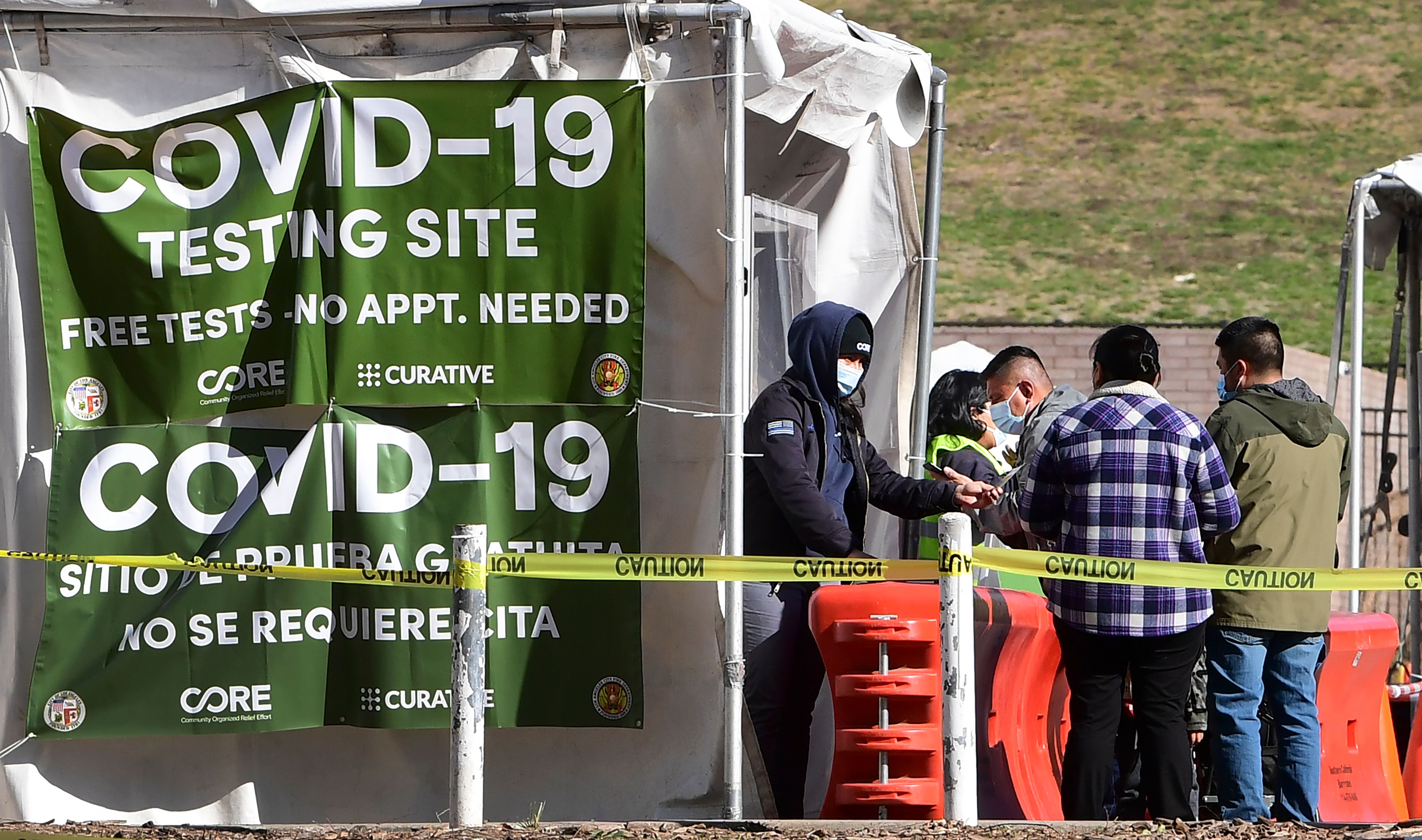 The US reported its first cases of the South Africa virus variant in South CarolinaCredit: AFP or licensors

The Biden administration has vowed to speed up deliveries of the vaccine over the next few weeks.

Johnson & Johnson, which is producing a vaccine in partnership with Janssen Pharmaceuticals, is poised to ask the Food and Drug Administration for emergency use authorization as early as next week, reports NBC.

It would be the third Covid-19 vaccine available in the US, along with Pfizer-BioNTech and Moderna.

The president plans to deliver 100 million vaccines within 100 days – 1 million doses per day.

But questions were raised about the goal after an estimated 912,497 vaccine doses were already being delivered each day under the Trump administration, Bloomberg News reported. 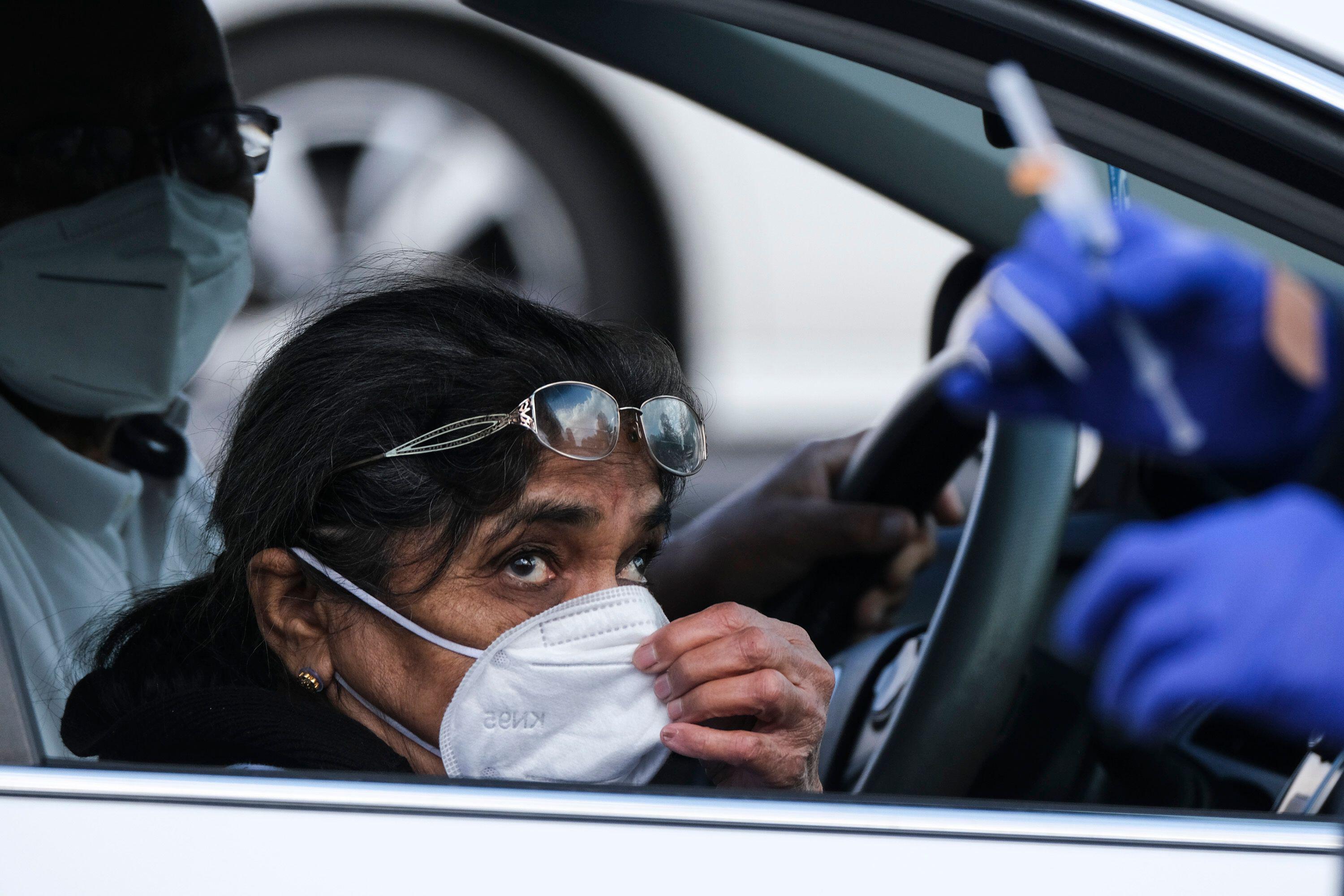 A reporter asked Biden: “Is that high enough? Shouldn’t you set the goal higher?”

Biden replied: “When I announced it, you all said it wasn’t possible.

The Pentagon said it is reviewing a request from the Federal Emergency Management Agency for military troops to help set up vaccination sites.

According to a draft of the request, FEMA wants the military to set up 100 teams which will help operate vaccination centers across the country.

It comes after it emerged that New York may have undercounted Covid deaths among nursing home residents by thousands.

Investigators looked at a sample of 62 of the state’s 600 nursing homes – they reported 1,914 deaths of residents from Covid-19, while the state Department of Health logged only 1,229 deaths.

But Democratic Governor Andrew Cuomos claimed his state is doing better than others in protecting its most vulnerable.

Fall in Covid cases is ‘running out of steam’