LOCKDOWN restrictions in place due to Covid-19 could be lifted sooner rather than later as cases continue to fall, one expert has claimed.

Data from the ZOE Symptom Tracker App released today states that cases of the virus have dropped by 27 per cent in the last week.

The experts revealed that there are currently around 14,818 people in the UK with symptomatic Covid – a fall from 20,360 cases a week ago.

The figures suggest that since the peak of 69,000 new cases a day on January 1, cases have dropped by around 79 per cent.

Around one in 233 people in the UK are believed to have symptomatic Covid and the study lead, Professor Tim Spector, today said that vaccines will work to our advantage in driving down infection rates.

So far in the UK over 13 million people have received their first dose of either the Oxford/AstraZeneca jab or Pfizer/BioNTech jab, with over half a million having had their second.

Prof Spector said: “Based on the ZOE data and our predictions we are soon to be in the same place we were in early June, with the advantage of having a large proportion of the population vaccinated which could mean good news in terms of lifting some restrictions sooner rather than later. 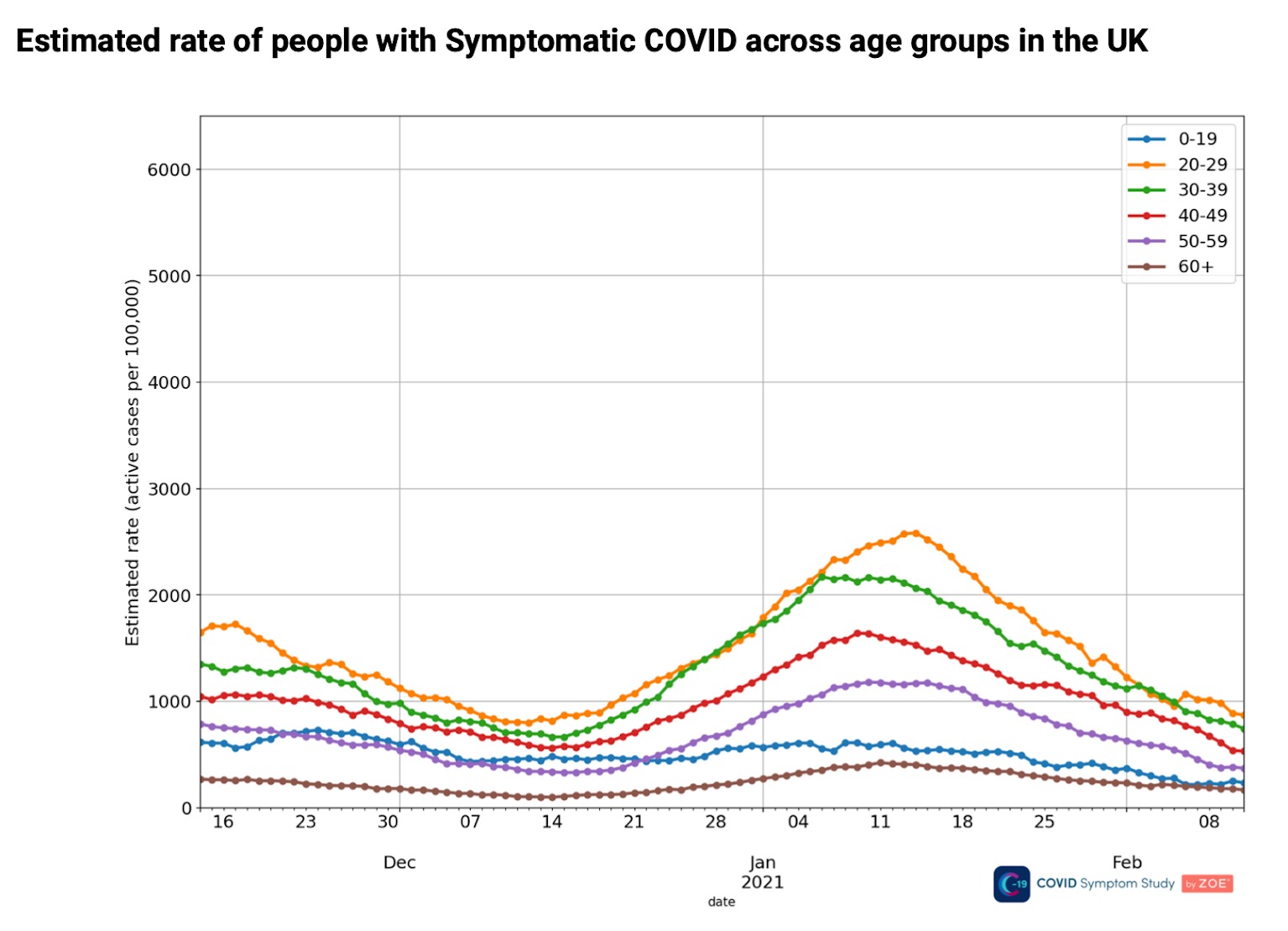 The chart above shows how cases of the virus have fallen across all age groupsCredit: zoe app

Prof Spector’s comments comes after one expert also today said that brighter days could be on the way.

Professor Neil Ferguson said areas with the lowest rates of Covid could go into Tier 1-style restrictions by May.

And at the very least, he thinks the whole of England could be under Tier 2-like restrictions.

In an interview on a Politico podcast, Prof Ferguson said: “By May time, it’s realistic to be in something akin to Tier 2.

“Maybe with areas of very low incidence by that time, we could move to Tier 1 type measures, completely relaxing and having something akin to where we were in August.”

However, he cautioned that the road out of tough measures will be a “bumpy” and slow one – and it could be next year before all restrictions are finally gone. 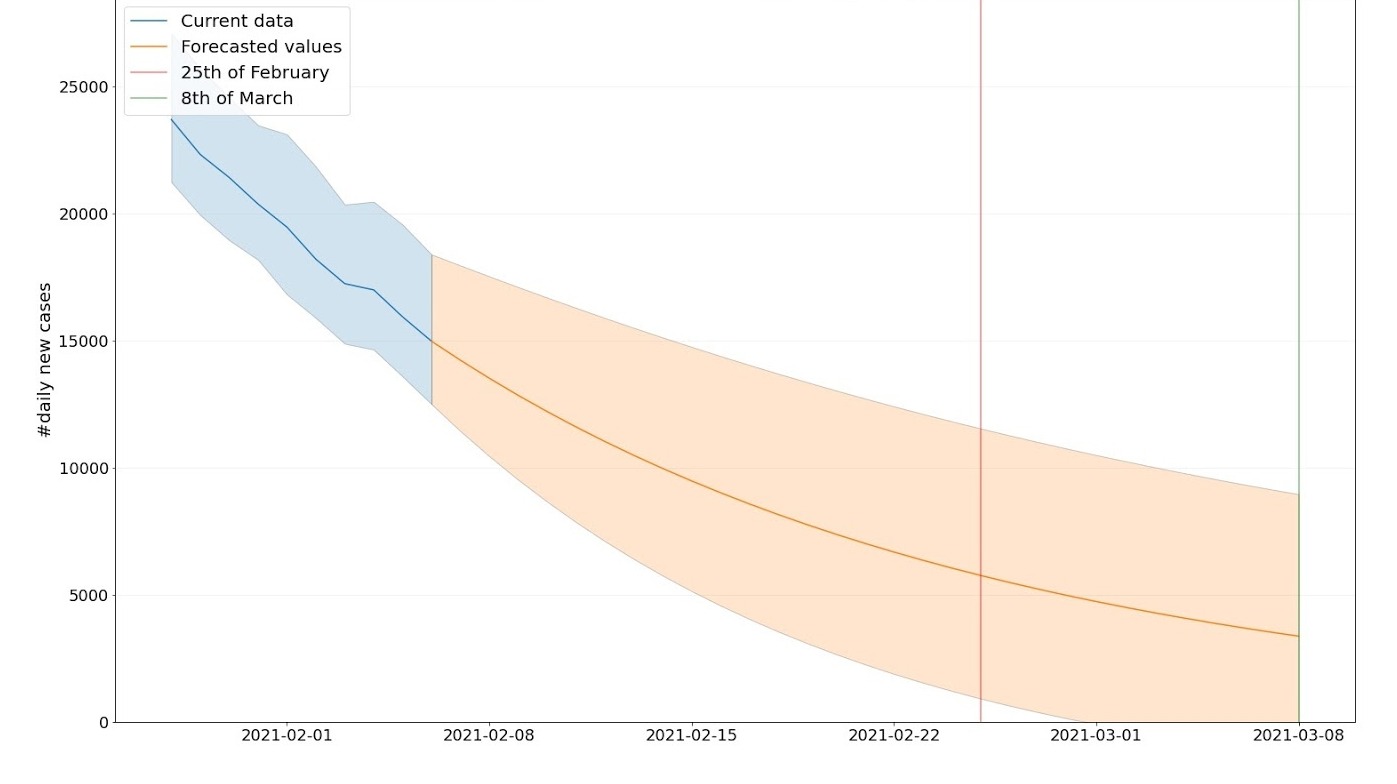 The graph above shows how cases of the virus are predicted to continue to fall into MarchCredit: zoe app

The data from the ZOE team states that on average one in 233 people in the UK currently have symptomatic Covid.

But experts have previously stated that a third of people who contract the virus display no symptoms at all – making infection harder to detect.

The experts also today provided their latest estimate for the R number across the UK – which they estimate to be at 0.8.

The experts said that cases are falling faster in England and Scotland and that London has the lowest R rate in the country at 0.7 – suggesting that numbers are falling in the capital.

The estimates by the experts at the ZOE app are different from government predictions which are released every Friday afternoon. 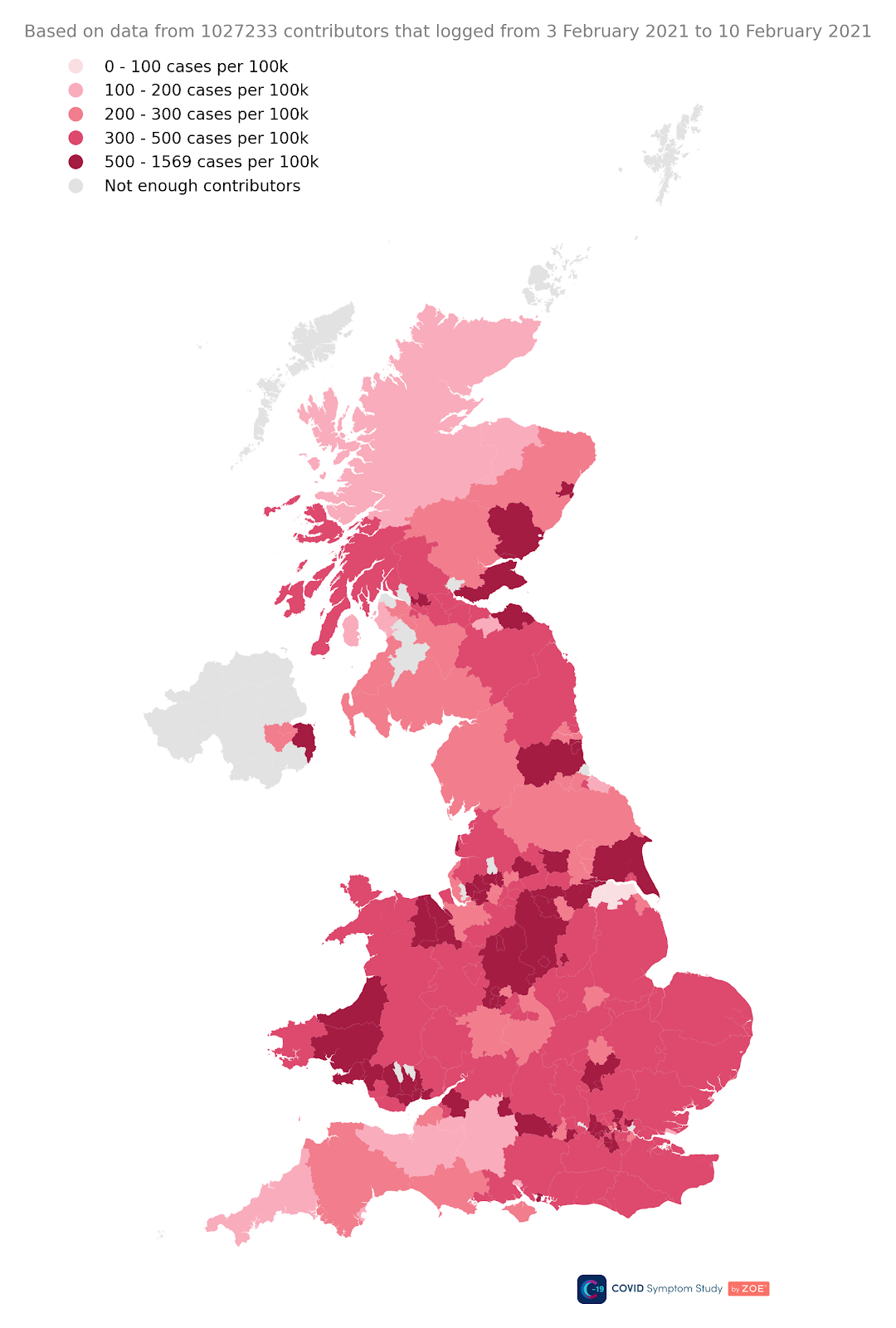 The map above shows where in the country is most infected with the areas shaded in dark pink having the highest levels of infectionsCredit: zoe app

Last week the government stated that the R rate was between 0.7 and 0.9 across the UK.

Sage is set to publish its latest estimates later this afternoon.

The ZOE experts stated that cases are coming down in all ages groups, “with cases in age groups closer than they have been for many months”.

They highlighted that the highest risk area in the country is Birmingham where 1 in 135 people are infected.

They added that London is the second most at risk with 1 in 152 people, with Cambridgeshire and Peterborough both having 1 in 160 people being infected.

These numbers differ from stats from Public Health England, which states that Rutland in the East Midlands currently has the highest rate of infection in the country per 100,000.

In the last seven days it recorded 186 new cases.