THE NUMBER of Covid hospital inpatients in England has finally dropped to levels seen in May.

Official data shows there are now less than 10,000 people in hospitals across the country with the disease. 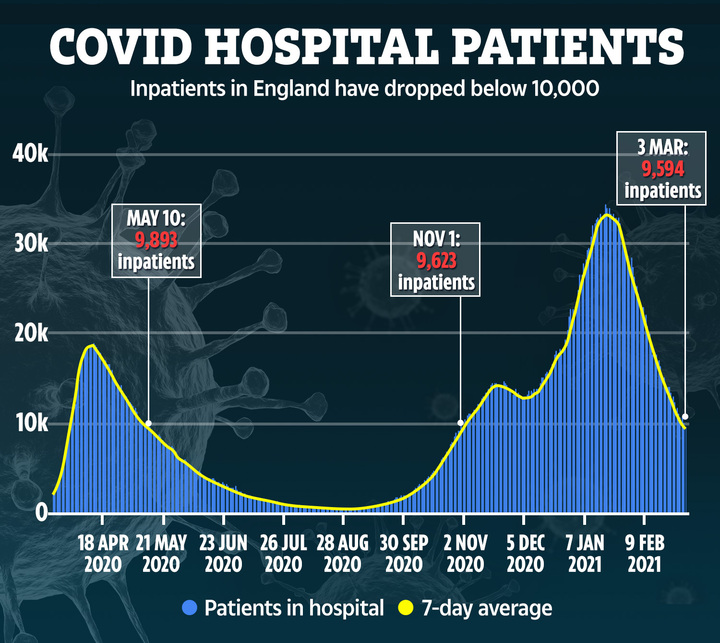 The number of Covid hospital inpatients has fallen to below 10,000 in England

On March 3, 9,594 patients were recorded as the second wave continues to tail off.

It’s the lowest since November 1, just before the second national lockdown, when inpatients stood at 9,623.

But it took another 17 weeks for inpatients to come down to the lowest level recorded.

Some 450 people with Covid were in England’s hospitals on September 9.

The data, from the Government dashboard, gives an idea of where the country currently stands in the outbreak.

It will take a couple of months for inpatients to come down below 1,000, going by data from the first wave.

Within that time potentially thousands more people are expected to lose their lives to Covid.

With 10,000 people still in hospitals across England, and around 800 being admitted every single day, the outbreak is far from over and NHS bosses have said the “battle is not won”.

But thanks to the rollout of Covid vaccines, the death rate should fall quickly.

The Health Secretary Matt Hancock said on Monday the number of admissions to hospital was falling faster than that of cases – particularly among the older age groups who were vaccinated first.

“This is a sign that the vaccine is working,” he said.

There was an even clearer sign in the data on deaths, Mr Hancock told a Downing Street press conference.

The rate of decline in the older groups is faster than in the under-80s, as the jabs successfully protect them from death. 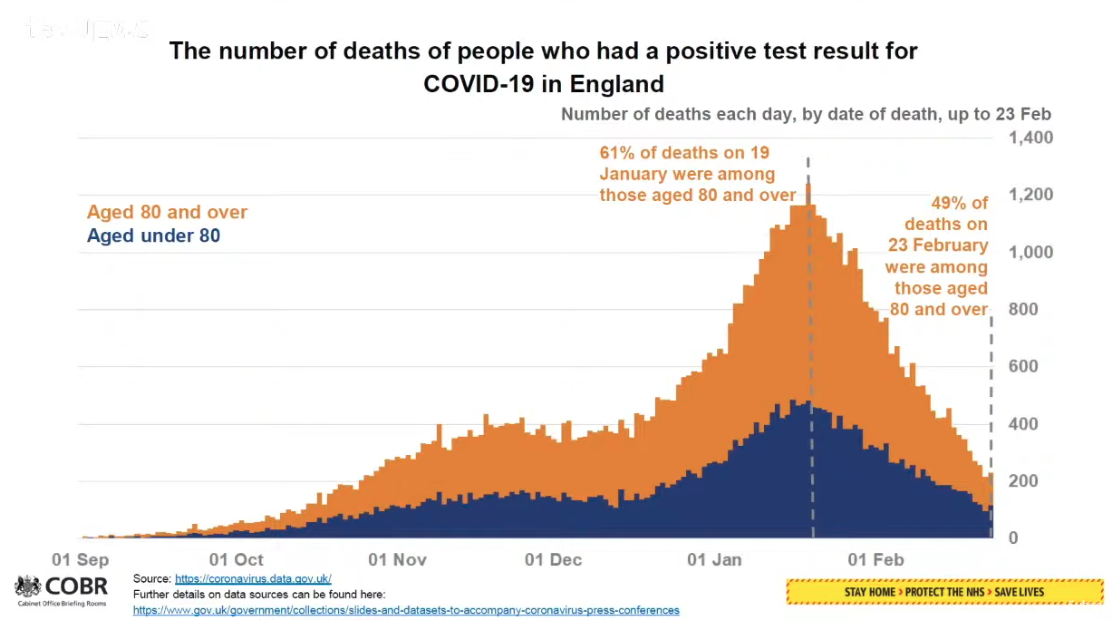 “This shows, in the real world , across the UK right now that the vaccine is helping both to protect the NHS and to save lives”, Mr Hancock said.

New data shows the risk of hospitalisation with Covid is 80 per cent lower for older people.

“A single shot of either the Oxford/AstraZeneca vaccine or of the Pfizer vaccine works against severe infection among the over-70s with a more than 80 per cent reduction in hospitalisations”, Mr Hancock said.

“In fact, the detailed data show that the protection that you get from catching Covid 35 days after a first jab is even slightly better for the Oxford jab than for Pfizer, albeit both results are clearly very strong.”

The results “may also help to explain why the number of Covid admissions to intensive care units among people over 80 in the UK have dropped to single figures in the last couple of weeks”, Mr Hancock said.

Less than 10 Covid patients over 80 are being sent to ICU each day.

Meanwhile, scientists have urged Brits to keep sticking to the Covid restrictions to reduce the number of people who get sick before they can get their jab.

Imperial College London researchers said infection rates need to get as low as possible to give the vaccination programme the “best chance of working”.

The team run the REACT-1 study, of which the most recent findings show the rate of decline in cases is slowing down.

Professor Paul Elliot, director of the React study and chair in Epidemiology and Public Health Medicine, Imperial College London, said: “We want to protect as many people as possible, and at the moment there are a lot of people who haven’t been vaccinated. But they will get vaccinated very shortly.

“So here is this window where if we can just all stick together, and pay attention to the lockdown rules, then hopefully we can minimise the number of infections before everyone who needs or wants a vaccine, gets a vaccine.”

It comes after the UK’s alert level was downgraded last week due to pressure on the NHS being eased.

The move means Covid is still in general circulation with transmission risk still high, but there is no longer a “material risk” of the NHS being overwhelmed.

NHS Providers chief executive Chris Hopson said the alert level may have dropped but there was a “long way to go yet”.

He said that “no-one in NHS (is) anywhere near declaring this phase of battle won”.